Never heard of this composer or the work con brio-am listening to it now c/o youtube. Len 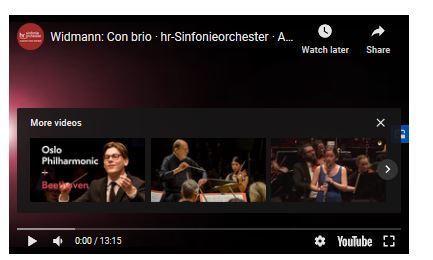 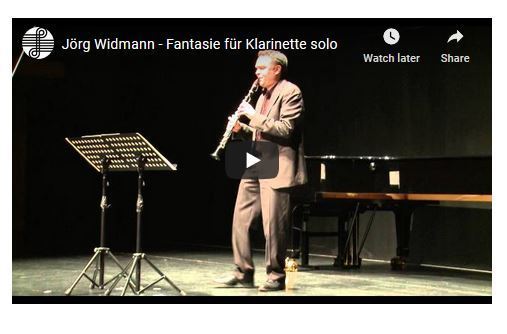 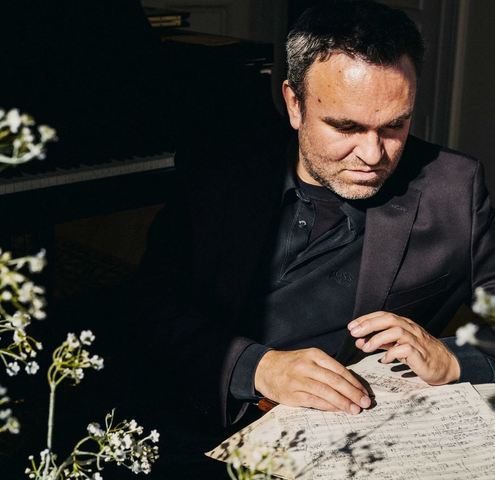 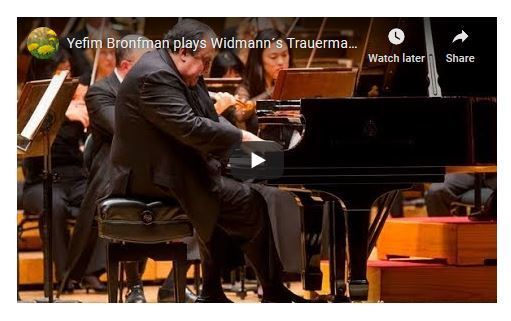 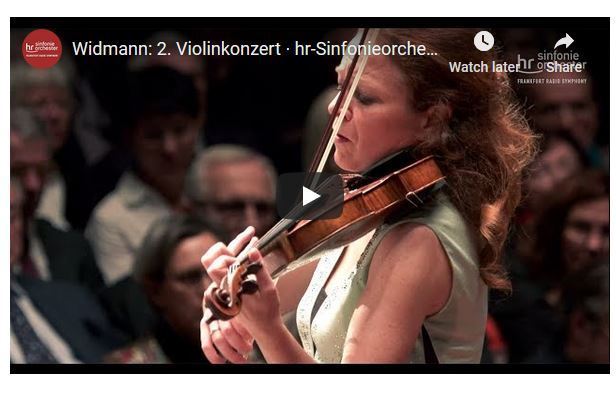 Jörg Widmann has risen to the top of his field with complex yet engaging music.

One of the most performed orchestral works written this century is a piece by Jörg Widmann. Commissioned by Mariss Jansons and the Bavarian Radio Symphony Orchestra and given its premiere in 2008, “Con Brio” has had over 200 performances. Before coronavirus-related cancellations, it was scheduled to be played 63 times by 28 orchestras this season alone.

This is a surprise. “Con Brio” was written in a mad hurry, the score in such a state upon delivery that Jansons (who died last year) insisted that its composer, who had never before stood on a podium, conduct its first rehearsal. And the piece is hardly easy — so full of extended techniques that, just 12 minutes long, it comes with six dense pages of written instructions.

“If someone would have told me that, from school orchestras to the Cleveland Orchestra, orchestras around the world would play this piece, I would have said, ‘No, are you kidding? It’s too complex,’” Mr. Widmann, 46, said in a recent phone interview. “I just conducted it today; it’s difficult.”

So what’s the appeal? Like much of Mr. Widmann’s work, “Con Brio” aims to give the past a fresh spin, so that those who love old music and those who love the new can both enjoy it. Using basically the same instrumentation as Beethoven’s Seventh and Eighth Symphonies, “Con Brio” is playful and cheeky, distorted and provocative — yet somehow familiar, as if it is pulling on the mystic chords of our musical memories.

“It’s not that it’s not complex — he’s a complex, dense, very intense writer — but I think people can genuinely relate to it,” Clive Gillinson, the executive and artistic director of Carnegie Hall, said of Mr. Widmann’s music. “You can sense the structure; there’s genuine power. It has impact. It does engage people.”

Mr. Widmann holds the Debs Composer’s Chair at Carnegie this season, and although coming concerts in the residency have been canceled, he has already led his own Irish Chamber Orchestra; given a lecture on dissonance and beauty; appeared as a clarinetist, chamber partner and conductor with the International Contemporary Ensemble; and, inevitably, had “Con Brio” performed by the Munich Philharmonic.


Mr. Widmann holds a rare position among composers of his generation. His music is performed by conductors and soloists who are committed to new music, as well as by those who are less so. He has been given the chance to write works of a length unimaginable to other composers, like the 45-minute “Messe” and the mammoth opera “Babylon.” “Babylon” was greeted frostily at its premiere in Munich in 2012, and even more icily after it was revised and re-premiered in Berlin last year; even when Mr. Widmann fails, he fails upward.

Composing came to him as a result of playing the clarinet. Born in Munich in 1973, Mr. Widmann grew up in an intensely musical family. He remembers his parents playing Haydn with their amateur string quartet, and being taken to see “Der Freischütz” at the opera, which stoked a lifelong admiration for Carl Maria von Weber. At 7, he took up the clarinet, on which he improvised at length.

“The reason why I started composing was that I was so angry with myself that I could not remember the beautiful moments of the improvisation of the day before,” he said. “I had to find a way to notate it.”

With notation came experimentation, a pushing of technical boundaries that would later be encapsulated in his early solo clarinet piece, “Fantasie.” Composing late at night when he was about 13, he would leave notes on the kitchen table for his younger sister, Carolin, asking her to try extended techniques on her violin. He recalled her typical first response: “You are mad.”

Still studying as a clarinetist, Mr. Widmann took composing lessons with giants like Hans Werner Henze, Wolfgang Rihm and Heiner Goebbels. He admired Helmut Lachenmann and got to know Pierre Boulez, whose picture he had hung on his childhood wall. By 2001, his brutal, microtonally inclined “Implosion” was being played at the Donaueschingen Musiktage festival, the zenith for contemporary composers in Germany.

“I am a child of this modern music world,” Mr. Widmann said, despite his arrival in what he called “mainstream circles.” But beneath its rash of surface scratching, even “Implosion” has an audible tonal shape to it — a sense of narrative and lyricism. Mr. Widmann’s output over the past two decades can be heard as an extended effort to find his place in an older musical lineage. If Boulez insisted on the need to forget the past, Mr. Widmann emphasizes the inevitability of remembering.

“He is in a tradition which he does not deny,” said Franz Welser-Möst, who cited Schubert, Strauss and Berg as being among Mr. Widmann’s “ancestors.” In 2009, Mr. Welser-Möst appointed Mr. Widmann the Cleveland Orchestra’s Daniel R. Lewis Young Composer Fellow, and this season has conducted the cacophonous “Babylon Suite” with the New York Philharmonic and the mournful piano concerto, “Trauermarsch,” with Cleveland at Carnegie Hall.

“He sometimes gets criticized in certain circles that his music is not, quote unquote, modern enough,” Mr. Welser-Möst added. “He actually is very much a child of our time. Everything is accessible, and he takes in these influences. So it can be chaotic at first listen, it can be very melodic, it can even be sometimes kitschy — but it’s done with a purpose.”

Although Mr. Widmann admits that he feels the pressure of “music history,” something he even notated at the stuttering start of his String Quartet No. 1, he approaches it more often with glee, through tributes, studies and parodies. Bach and Mendelssohn show up in “Partita,” just as “Flûte en Suite” digs up a series of Baroque dances.

Haydnesque humor opens “Tanz auf dem Vulkan,” as the conductor wanders onstage to find the orchestra playing walking-bass jazz. “ARCHE,” an oratorio written for the opening of the Hamburg Elbphilharmonie, deploys “the entire history of German music from Bach to, well, Widmann” to an extent so colossal it would make Mahler “blush for shame,” the critic Peter Quantrill wrote.

“The sheer fact that I deal with the past so much, does that mean that I am nostalgic? I say no,” Mr. Widmann said. “The crucial thing is, if I don’t go further than that, and link it with today, and make the listener listen to this quote in a different way, then I should not do it at all.”

What he often finds interesting in past pieces is an odd dissonance, a technical peculiarity or a structural twist, but in his best works these small inspirations are usually obscured.

“Trauermarsch” is based on a falling semitone, G flat down to F, that instantly recalls fateful motifs in Wagner and Mahler, but it takes those associations in a direction wholly new. “Das Heiße Herz,” a shattering song cycle written for Christian Gerhaher and later orchestrated, is audibly rooted in Schumann and Berg, but has a subtle, fractured power all its own. And two of his most recent concertos, the Viola Concerto and the Violin Concerto No. 2, written for his sister, begin with extended inquiries into what those instruments can do, as if to ask what they might do for us, in the shadow of the past.

All this has exposed Mr. Widmann to accusations of conservatism; VAN magazine has derided his work as “music of the middle degree.” He deflects these criticisms, characteristically, through appeals to history.

“My theory would be rather Schoenbergian,” he said, arguing that what might sound like “ordinary tonality” in his works barely ever is. “We learn in the history books, and rightly so, that he was a revolutionary. But if you talked to Schoenberg himself, he would always say, all his life, ‘Well, but I don’t do anything differently from Brahms.’”

Mr. Widmann’s music appeals to his champions — and, they assume, to their audiences — precisely because it bridges the gap between a new music they believe is seen as impenetrable, and an older music they know they cannot perform without end.

“When you look at the last 50 years, how much music is there which is considered, by the broad audience, too brainy, where you feel there’s a disconnect?” Mr. Welser-Möst said. “I don’t think you could call him traditional, yet he has this gift to speak to listeners, to speak to their intuitions.”

For Anne-Sophie Mutter, the superstar violinist who just gave the premiere of the String Quartet No. 6 in Tokyo and brings it to Carnegie next January, it is the combination of intellect and sensuality that strikes home.

“With Jörg’s pieces I’ve noticed that there’s always this wonderful architecture, in a way in an almost classical form,” she said in a phone interview, adding that she hopes to ask him for a violin concerto and a piano trio. “It’s definitely not contemporary music which is a collection of interesting sounds.”

That, at least, is Mr. Widmann’s hope. “I want my music to be played as music, and not as new music, or as old music,” he said. “I write music.”