Before Bach, He Was Germany’s Greatest Composer

Before Bach, He Was Germany’s Greatest Composer

Another composer I never heard of-quite a few audio clips are available at the site and of course youtube. Len


Before Bach, He Was Germany’s Greatest Composer

The professor who taught a course I took on Baroque music in graduate school certainly fit the stereotype of a stuffy old musicologist, with his baggy suits and befuddled manner, yet strict adherence to scholarship. But I’ll be forever grateful to him, because he essentially introduced me to the music of Heinrich Schütz.

I knew of Schütz’s historical importance; born in 1585, exactly 100 years before Bach, he is considered the greatest German composer of the 17th century. I hardly knew his music, however, and neither does much of the concert-going public today.

One day, that professor put on a recording of Schütz’s “Die Sieben Worte Jesu am Kreuz,” a setting of Jesus’s final words from the cross, framed by two stanzas of a hymn text. From the start of the poignant Introitus to this austerely beautiful piece, I was hooked.

Scored for five voices, five unspecified instrumental parts and basso continuo, the music is reverent and wistful. Though there are flowing lines, with voices sometimes in duo, the piece comes across, overall, as declamatory — like a chorale — with short passages almost in block chords, and moments that slip into subtly intricate hints of counterpoint. The musical language is steeped in older modal scales, however crucial passages and final phrases settle into diatonic harmony (major and minor chords), the newer language that was emerging in Schütz’s time.

What grabbed me was the importance Schütz gave to making the German text clear. In faithfully rendering the clipped rhythms and natural cadences of the language, the music taps into the deeper meaning of the words. Schütz drives home the emotions through deliberate repetitions of overlapping phrases. As a devotee of musical theater, I was struck by how Schütz seemed to anticipate the word-setting techniques of Broadway songsmiths.


Today, I still know only a fraction of the nearly 500 pieces of Schütz’s that survive: motets, madrigals, sacred concertos, oratorios and more. I was looking forward to a program of his music — including the rarity “Musikalische Exequien,” a soft-spoken masterpiece and one of the great requiems — that the ensemble Tenet Vocal Artists was planning to present on Saturday. But it, like virtually every other concert in New York, was canceled in an effort to help curb the spread of the coronavirus.

Still, with concert-going suspended, we should take a chance to listen to music by a towering composer who is overlooked today. And “Musikalische Exequien” is the work of someone who would have sympathy for the current global crisis. Based in Dresden, Schütz experienced the numbing disruptions of the Thirty Years’ War and lived through a time when Germany was plagued with illnesses: He lost his young wife early on (and never remarried) and watched his two adult daughters die.

Schütz’s career hinged on a chance encounter. He was born to a prominent bourgeois family of Franconian heritage near the city of Gera, but grew up in Weissenfels, after his father inherited a prosperous inn from his own father.

One day, the landgrave Moritz of Hessen-Kassel, who was an amateur composer, stayed at the inn and heard the young Schütz singing — beautifully. He urged the boy’s parents to let him take the 12-year-old to his court, to sing in the choir and study at a collegium he had founded. Schütz’s parents, intent on having their son follow a sensible profession, resisted, before giving in.

After thriving in his musical studies, Schütz, bowing to family pressure, began to study law in Marburg. But during a visit, the landgrave urged Schütz to go to Venice and work with Giovanni Gabrieli, the famed composer and organist at St. Mark’s Basilica. With a stipend from the landgrave, Schütz spent three years there absorbing Italian musical styles and traditions, and would later return to work with Monteverdi. Eventually, Schütz was poached from the landgrave’s service and brought to the court in Dresden, where, despite the tumultuous times, he thrived as his fame and influence grew.

Schütz’s development can be seen as a lifelong attempt to reconcile the Italian style — steeped in lyricism, multipart madrigals and grand concerted forces with antiphonal choruses and ensembles — and the German one, which favored leaner sound and contrapuntal textures.

Nursing my disappointment over the Tenet concert cancellation, I’ve been on a binge of Schütz recordings. The influence of Italian style runs through the “Psalmen Davids,” settings of some two dozen psalms for small chorus and instruments, including brass. Scholars have described these early works as almost a résumé of Schütz’s achievements to date. Though their overall character is reverent and restrained, the antiphonal back-and-forth between small choirs of voices and various batteries of instruments seems unabashedly Venetian.


I love the setting of Psalm 150, which calls to praise God with dancing and the sounds of trumpets, harps and cymbals. Stravinsky set the same text as the final movement of “Symphony of Psalms”; Schütz’s version seems just as fresh and startling.

In 1990, the conductor Craig Smith and the chorus of Emmanuel Music in Boston recorded a superb album of 21 Schütz motets. The roster of singers in the chorus included names of artists who were already having significant careers, including Jayne West, Mary Westbrook-Geha, Frank Kelley and the irreplaceable Lorraine Hunt (before her marriage to Peter Lieberson). It said much about the respect these singers had for Schütz that they so readily joined a chorus for ravishing, refined masterpieces like “Sicut Moses Serpentem in deserto Excalvit” and “Unser Wandel ist im Himmel.”

If Schütz isn’t a go-to name for the canon of Western classical music, it’s probably because he was squeezed out somewhat by his slightly earlier Italian contemporary Monteverdi. He has also been overshadowed by Bach, his German successor. Scholars say it’s difficult to specify how much Schütz’s work influenced Bach, but he undeniably forged paths that subsequent German composers followed.

Later in life, Schütz — who died in 1672, at 87 years old — composed three passions that anticipated those of Bach. These works are affectingly austere. The elegant, supple, quasi-melodious recitatives for the Evangelist and Jesus are unaccompanied; the lucid choral writing is dramatic, but understated. The tenor Peter Schreier, who died last year, recorded all three of the Evangelist roles with the Dresdner Kreuzchor choir, singing with radiant sound and aching sensitivity. I especially love the “St. Matthew Passion.”

I don’t think Bach would mind if, now and then, a performance of his own “St. Matthew Passion” were replaced with Schütz’s. I’d be there.

Re: Before Bach, He Was Germany’s Greatest Composer

Schutz is one composer I have always meant to get to one day. The few pieces I have heard are magnificent, if you like early church music. I have no experience of his madrigals. Here's a set I plan to acquire in the near future of his complete works, Volume I: 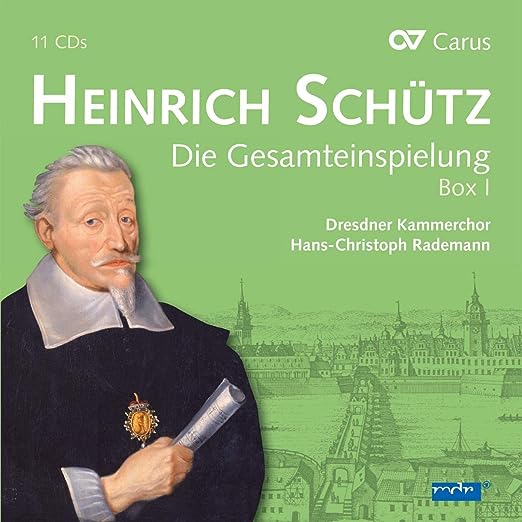 Re: Before Bach, He Was Germany’s Greatest Composer

maestrob wrote: ↑
Sat Mar 21, 2020 12:08 pm
Schutz is one composer I have always meant to get to one day. The few pieces I have heard are magnificent, if you like early church music.

Brian I listened to a few of his pieces on youtube and they appealed to me. Regards, Len
Top
Post Reply
3 posts • Page 1 of 1