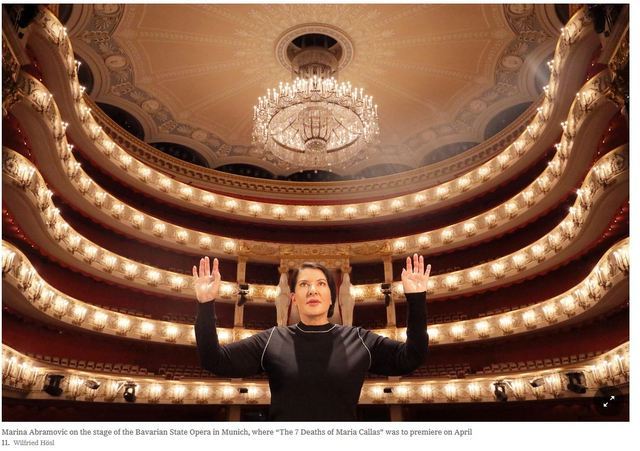 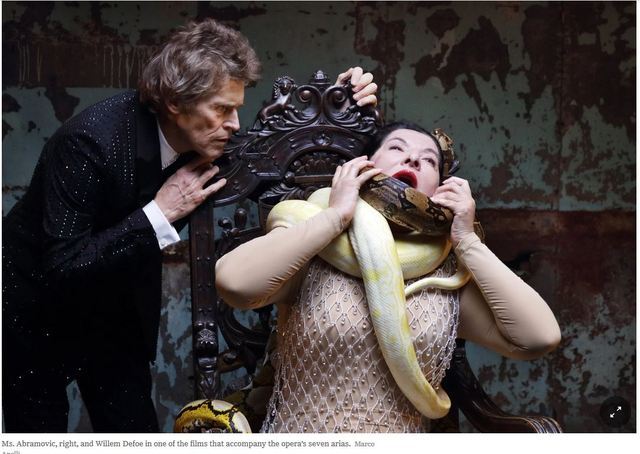 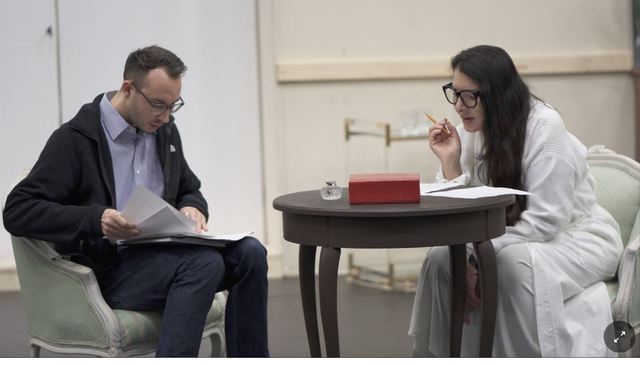 “The 7 Deaths of Maria Callas” should have been the culmination of a 60-year obsession. Now its future is uncertain.

Marina Abramovic has pulled off some crazy feats.

In a decades-spanning career, the 73-year-old Serbian performance artist has walked more than 1,000 miles along the Great Wall of China. She has laid within a gasoline-soaked pentagram and set it afire. At the Museum of Modern Art in New York, she sat perfectly still in the atrium, six days a week, for months.

What she didn’t manage, though, was to stage the premiere of a new opera in the middle of a pandemic.

For the past month, Ms. Abramovic has been based in Munich, developing “The 7 Deaths of Maria Callas,” a music-theater work about the tragic myths surrounding the American-born Greek soprano, at the Bavarian State Opera. Combining elements of video and performance art, the piece strings together seven famous arias associated with Callas and new music by the composer Marko Nikodijevic.

As recently as late March, at Ms. Abramovic’s request, the Bavarian State Opera was still investigating whether the work’s scheduled April 11 premiere could go ahead, live-streamed online but with no audience in the theater. In an interview then, Nikolaus Bachler, the company’s artistic director, said he was considering removing seats from the orchestra level, so musicians could space out and perform while maintaining social distancing.

But, in a statement on April 1, the company said the alternatives it had been exploring were “not justifiable,” and postponed the first performance to an unspecified later date.

“I was hoping that angels will help us,” Ms. Abramovic said in an interview after the announcement. “Every day more and more. But it’s impossible.”

The premiere would have been the culmination of an obsession with Callas that began when Ms. Abramovic was 14; she recalled first hearing the diva sing on the radio in her grandmother’s kitchen, in what was then Yugoslavia. “I was mesmerized, and I had goose pimples, and total electricity in my body,” she said.

“Later on, I knew everything about her,” Ms. Abramovic said. “I read eight biographies, all of them, and there was so much similarity that I see in myself. We are Sagittarius, the same; we had bad mothers. And then, also, this incredible intensity in the emotions, that she can be fragile, and strong at the same time.”

For “The 7 Deaths Deaths of Maria Callas,” Ms. Abramovic selected the arias, beginning with “Addio del passato” from “La Traviata” and reaching a climax with “Casta Diva” from “Norma,” to reflect those emotional states, and she worked with the music video director Nabil Elderkin to develop the short films, which play onstage while the singers perform live. Last November, she flew to Los Angeles to record the films with Mr. Dafoe.

In an interview, Mr. Dafoe said he had gotten to know Ms. Abramovic when he was acting with the Wooster Group, the experimental New York theater company. In the early 2000s, Ms. Abramovic was living in a co-op in the same downtown building as the theater, and she would come to see its shows. The two became friends and later collaborated on “The Life and Death of Marina Abramovic,” a stage work by the avant-garde director Robert Wilson.

In six of the videos, Mr. Dafoe plays Ms. Abramovic’s lover or assassin; in all of them, Ms. Abramovic dies. In one, Mr. Dafoe handles a python that strangles Ms. Abramovic, to the strains of the “Ave Maria” Desdemona sings shortly before being throttled by the title character in Verdi’s “Otello.”

“I’ve known her for years, and I like being part of her work,” Mr. Dafoe said. “If she wants me to kill her, well, that’s quite an honor.”

In another video, Mr. Dafoe stabs Ms. Abramovic to the Habanera from “Carmen.” Susan McClary, a professor of musicology at Case Western Reserve University in Cleveland, said in an interview that Bizet’s opera had established the trope of the tragic heroine who gets murdered onstage. Women had died in opera from the art form’s beginnings, she said, but the audience didn’t see it until the 19th century.

“After ‘Carmen,’ because it was such a hit, it became almost de rigueur,” Professor McClary said. “If a woman sings these high notes, and does all of this self-display, then, somehow or other, she’s going to have to be killed.”

“The 7 Deaths of Maria Callas” asks the audience to think about the ubiquity of the dying diva, but Ms. Abramovic said she did not want it to be seen as a critique of misogyny in opera. “I’m not a feminist, to start with,” she said; a woman’s death onstage was simply “more dramatic” and “more beautiful” than a man’s.

Callas, whose passionate artistry helped resuscitate the early-19th-century bel canto repertoire that had largely vanished by the mid-20th century, had no shortage of drama in her own life. She had tempestuous relationships with impresarios, audiences and the press; lost weight precipitously; and, more gradually, lost her superbly sensitive voice.

Then there was her affair with Aristotle Onassis. The two met while Callas was married to the Italian businessman Giovanni Battista Meneghini, and began a relationship, which turned into a much-publicized love triangle with Jacqueline Kennedy (later Jacqueline Kennedy Onassis). After Onassis died in 1975, Callas became a recluse in her Paris apartment, where she died of heart failure in 1977, just 53.

“She didn’t want to live anymore,” Ms. Abramovic said. “She actually died for love,” she added, “and I almost died for love, so I understand what it means.”

Ms. Abramovic said that when her Italian husband, the artist Paolo Canevari, walked out on her about a decade ago, she was distraught. “I stopped eating,” she said. “I stopped drinking. I didn’t want to live anymore. I was in a very bad state, for a long time.”

Working, Ms. Abramovic added, was the only thing that saved her. “But Callas gave up even her work,” she said. “And that’s the big difference between her and me. I could not give up my work.”

That spirit of iron-willed perseverance was on display in a rehearsal studio in Munich, in late March, as Ms. Abramovic’s team pushed on with the show, with a reporter watching over Skype. Ms. Abramovic, dressed in a long white robe, squinted into an iPad camera. “This is not what I will be wearing,” she said. “This is just for rehearsal.”


She then sat down at a table opposite the production’s co-director, Lynsey Peisinger, an American performance artist and frequent Abramovic collaborator. Ms. Abramovic listened intently and took notes while Ms. Peisinger gave detailed instructions about how to move around the stage in the lead-up to the opera’s finale, which plays out after the seven arias.

“This is the last part you will see,” Ms. Abramovic explained. “In the bedroom of Callas.”

“I can’t be on the stage and out of the stage at the same time,” Ms. Abramovic said later, so she needed Ms. Peisinger’s help to choreograph her movements. “It’s based on trust and long collaboration.”

After receiving directions for about 15 minutes, Ms. Abramovic got into a bed on the other side of the studio, and ran through the scene. A sound system played a synthesizer arrangement of Mr. Nikodijevic’s gloomy orchestral music, with long, spare chords and dramatic bass.

As instructed, Ms. Abramovic rose from the bed, as if in a trance, and moved around the studio: to a mirror against a wall at the back, and then to a table in the center of the room, where she slowly lifted a plastic rehearsal vase, then threw it on the floor.

“You’re remembering a lot of things now,” Ms. Peisinger said. “Little by little, it’s going to get more in your memory.”

Ms. Abramovic nodded, and then took notes again while Ms. Peisinger ran through the scene, with detailed feedback on how to fine-tune the movements. Then Ms. Abramovic stood up, abruptly, and moved to a corner of the studio to sneeze. There was a long pause.

“Usually they are coming in threes,” she said. But when no more came, she returned to the table, stopping on the way to pump some sanitizing gel.

“We are always disinfecting hands,” Ms. Abramovic said, looking sideways at the camera.

Because the Munich opera company is state-run, rehearsals were allowed to continue even after most private employees in Germany were told to stay at home. Mr. Bachler, the artistic director, said that safety and adherence to government regulations had been a priority throughout. Those rules limited the number of people who could gather in rehearsal spaces, and the distance they had to keep from each other: 1.5 meters, about five feet.

The production’s conductor, Yoel Gamzou, said that developing the work under those circumstances had been challenging, but exciting. “This is a new situation for all of us,” he said, but everyone had tried to “take this as far as we can.”

As well as the postponed five-night run in Munich, Mr. Gamzou was booked to conduct the opera at houses in Athens, Berlin, Florence and Paris, from June through September. But, after major summer events across Europe like the Edinburgh and Bayreuth festivals were canceled in recent weeks, many of those dates now seem uncertain at best.

Mr. Gamzou said he was optimistic about the work’s future, however. “When this is all over, and we do manage to perform this,” he said, “one thing is for sure: None of us involved will ever forget this production.”

The difficult rehearsal period required a regimented approach, Ms. Abramovic said. “It was very important to schedule the daily life really like a military discipline: Wake up in the morning, exercise, have breakfast and go to the opera,” she said. “Every single day was the same.”

She said she hadn’t worried about getting the virus: “I didn’t think once. If you think how many dangerous things I made in my own life with performance, I could be dead already so many times.”

“When I do the work I love,” she added, “nothing can happen to me.”

Users browsing this forum: No registered users and 25 guests