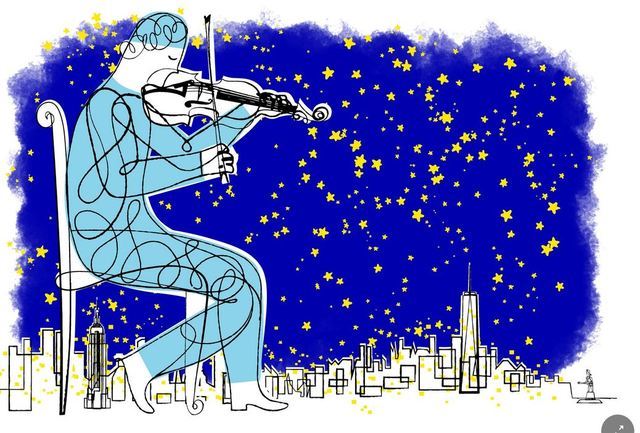 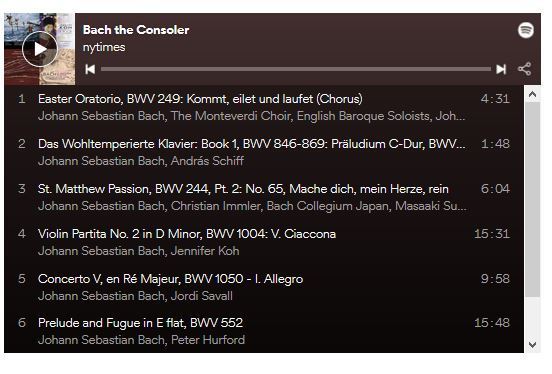 
A consoling composer’s music reminds our critic of a surgeon who once helped him and is now on the front line of New York’s coronavirus crisis.
Credit...Elvis Swift

When the physician and writer Lewis Thomas died, in 1993, his New York Times obituary called him “the poet-philosopher of medicine.” And of science in general, it might have added. In one essay, he wrote about a prospective attempt at contact with whatever living creatures might inhabit interstellar reaches. What should we try to communicate?

“I would vote for Bach,” Thomas wrote, “all of Bach, streamed out into space, over and over again. We would be bragging, of course, but it is surely excusable for us to put the best possible face on at the beginning of such an acquaintance. We can tell the harder truths later.”

I would vote for Bach, too — especially at this time of hard truths. His music, like that of others but more than most, can edify, elevate and inspire in its intelligence, its endless inventiveness and its understated emotion.

And in its very intimacy, his music can pack a tremendous visceral punch. Bach — the least socially distanced of composers in his domestic life, with 20 children passing through at one time or another — wrote a lot of music that is ideal for social distancing, most notably his many solo works for violin, cello or keyboard. During Music Never Sleeps NYC, a wonderful recent 24-hour live-streamed event, Bach after Bach emerged from the instruments of the artists transmitting from their apartments.

Before playing the Chaconne from the Unaccompanied Violin Partita No. 2, Jennifer Koh spoke of the solace this music can offer in a troubled time. The violinist Midori conveyed much the same sentiment without words in a complete performance of the Partita No. 1. The Knights, a chamber orchestra, contributed a remarkable performance of the “Brandenburg” Concerto No. 3 filmed at Caramoor last fall. In place of the slow movement that Bach never wrote, it included an arrangement of Paul Simon’s “American Tune” (itself based on Bach’s Passion chorale), movingly sung by Christina Courtin.

This all came as blessed relief, solace indeed. But there was also an uncomfortable edge. For, I often had to wonder, who am I to be privileged to wallow in Bach when so many people are suffering and dying of the virus? Who am I to be so gloriously entertained while doctors, nurses and hospital supply, maintenance and cleaning people are laboring as never before in unrelentingly terrifying conditions?
Ideas from The Times on what to read, cook, watch, play and listen to while staying safe At Home.

I thought of a medical poet-philosopher of our own moment, Craig R. Smith, the surgeon-in-chief at NewYork-Presbyterian Hospital. He writes daily updates about the coronavirus crisis to the hospital staff, which have attracted a following on the internet for their depth, candor, gentle and tough encouragement, cleareyed compassion and literary quality.

Unlike Lewis Thomas, who generally reflected from a serene height above the fray, Dr. Smith is writing in the horrifying grip of the here and now, of ventilators and personal protective equipment. “Today,” he noted last month, “I don’t want my parables and literary flourishes to get in the way of the redeployment punchline, which is this: We will not leave you alone out there!”


“We will keep pumping out people,” he added, “as long as we have people to pump.”

And his literary flourishes, when they come, are apt. Writing late in the day on April 1, Dr. Smith quoted the classic opening lines of T.S. Eliot’s “The Wasteland”: “April is the cruelest month, breeding / Lilacs out of the dead land, mixing / Memory and desire, stirring / Dull roots with spring rain.” Then he added: “In an April that may be apocalyptically cruel, that is how we are poised, desiring spring.”

It is easy enough to salute embattled health care workers in the abstract. But for me, Dr. Smith puts a personal, human face on the matter, making issues of gratitude and respect even more poignant. I already knew him, from what seems an earlier world.

Ten years ago, Dr. Smith performed open-heart surgery to replace my congenitally malformed aortic valve, which had led to years of worsening arrhythmia. Though typically booked solid with two surgeries a day, he kindly visited my room just before the operation for what must have seemed to him an absurd consultation: to reassure a nervous music critic that the mechanical valve he was about to install would not audibly click or clank during concerts at Carnegie Hall.

Open-heart surgery, I have learned, does funny (and not so funny) things to your emotional makeup. For one, I immediately developed deep-seated, squirreling obsessions: How, for instance, could you possibly thank someone who had actually handled your heart and fixed it?

You can’t, not adequately. But I gave Dr. Smith a CD copy of Bach’s “St. Matthew Passion” and fumblingly tried to explain that this music was one of my main reasons for wanting to live longer, and that I hoped that he might share some of the same feeling.

Now, once again, I hope that Dr. Smith and his valiant colleagues might eventually find through music the solace and, yes, joy that some of us have already been privileged to salvage from this dreadful time. May Bach and his composing and performing colleagues help us all on what promises to be a long road to recovery.