We didn't get a chance to watch it. Regards, Len

For four hours, more than 40 of the company’s stars performed live from their homes around the world. 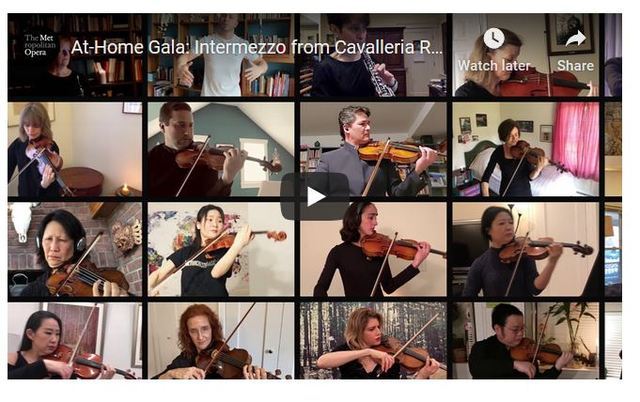 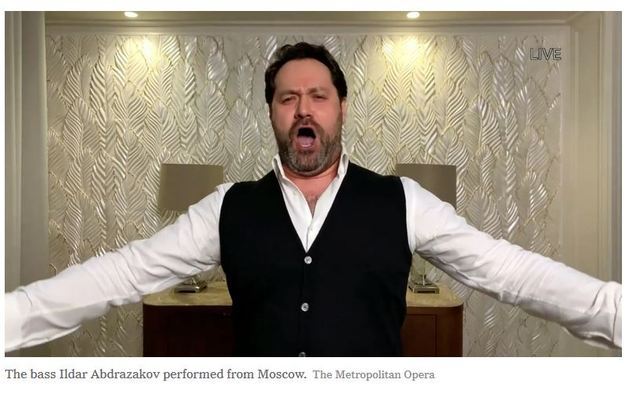 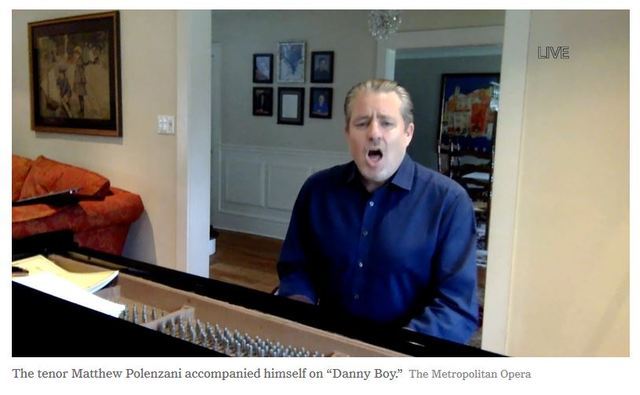 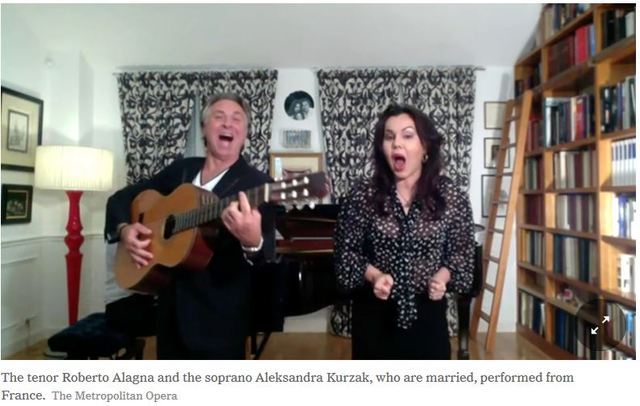 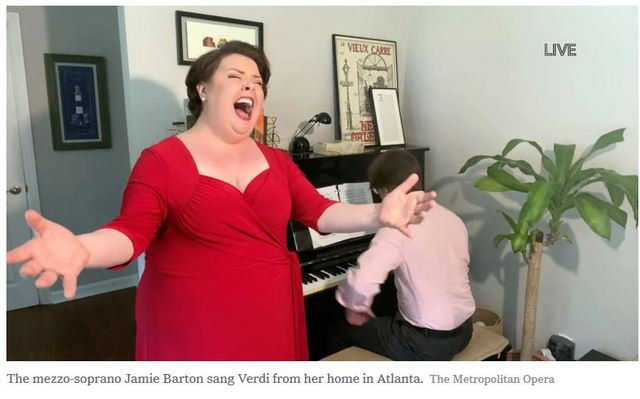 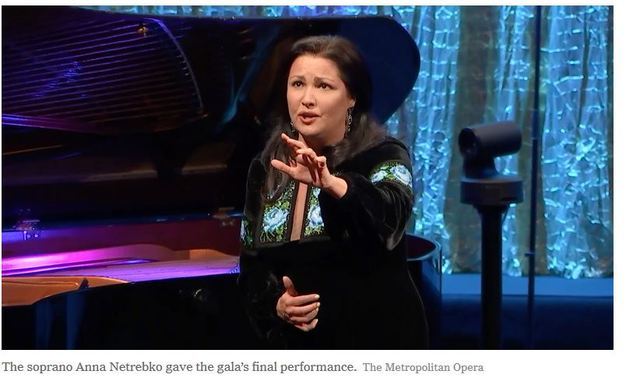 The Metropolitan Opera has reserved sprawling gala performances, with dozens of singers, for festive milestones: the retirement of a longtime general manager, say, or the company’s 50th anniversary at Lincoln Center.

This moment, of course, is anything but festive. The coronavirus pandemic has swiftly reshaped life worldwide, and the Met, like theaters almost everywhere, has been shuttered since the middle of March, with no end in sight. It stands to lose up to $60 million just through next month, and it’s too early to say whether it will open its next season in September.

Yet on Saturday afternoon, the company summoned its estimable resources and put on a virtual At-Home Gala, which streamed live on its website (and remains available until 8 p.m. on Sunday).

Though things are bleak all over, and certainly for the Met, it was inspiring — and fun — to see beloved artists relaxed, smiling and sounding splendid, some in gala attire and some, well, not. The baritone Peter Mattei, dressed in a casual shirt and slacks at his lakefront home outside Stockholm, sang the serenade from Mozart’s “Don Giovanni” — with the usual mandolin accompaniment played on accordion by a neighbor. The tenor Roberto Alagna and the soprano Aleksandra Kurzak, appearing together from France, delightedly hammed up a selection from Donizetti’s “L’Elisir d’Amore,” with Mr. Alagna clambering up the ladder attached to their bookshelves.


The mezzo-soprano Jamie Barton, in Atlanta, brought sumptuous intensity to “O don fatale” from Verdi’s “Don Carlo,” her Harry Potter books visible behind her on the piano. (She was accompanied live by Jonathan Easter but most singers used prerecorded pianists.) The soprano Lisette Oropesa, in Baton Rouge, La., sounded radiant in an aria from Meyerbeer’s “Robert le Diable.”

Renée Fleming, at her home in Virginia, was in lovely voice for the “Ave Maria” from Verdi’s “Otello,” one of the defining works of her career. The recorded piano accompaniment she used was barely audible, yet the flawed balances actually lent extra poignancy to the performance. At the end, when she teared up, so did I. We have all sometimes taken opera, and opera houses, and opera singers, for granted. No longer.


As a pianist, I was especially impressed by the singers who accompanied themselves, like the tenor Matthew Polenzani, at home in Pelham, N.Y., who played and sang “Danny Boy.” (His family erupted in applause from behind the camera after he finished.) The bass Günther Groissböck, in Lugano, Switzerland, accompanied himself ably in a stirring aria from Strauss’s “Die Schweigsame Frau.”

From Paris, the baritone Étienne Dupuis and the soprano Nicole Car, another married couple, performed a duet from Massenet’s “Thaïs” with Mr. Dupuis at the piano. And the soprano Erin Morley, in New Haven, Conn., accompanied herself in a coloratura showpiece from Donizetti’s “La Fille du Régiment,” demonstrating nimble piano technique while tossing off ornate runs and gleaming high notes, and asking those watching to join in for the choruses. The countertenor Anthony

The tenor Piotr Beczala performed from a remote village in Poland; the bass Ildar Abdrazakov, awaiting the imminent arrival of a new child, from Moscow. Michael Volle sang Wagner in an austere room, a Fra Angelico reproduction in the background; René Pape was joined by one of the tiny René Pape duck figurines he sells on his website. Other singers included Angel Blue, Javier Camarena, Diana Damrau, Lawrence Brownlee, Jonas Kaufmann, Bryn Terfel (with his wife, the harpist Hannah Stone) and Anita Rachvelishvili — all wonderful.

In a sublime selection, the mezzo-soprano Joyce di Donato and seven players from the Met’s viola section — who had all recorded their parts individually — performed “Ombra mai fu” from Handel’s “Serse” in memory of their veteran violist colleague Vincent Lionti, who died early this month of the coronavirus.

It was one of several prerecorded performances involving members of the Met’s orchestra. The others were led by the company’s music director, Yannick Nézet-Séguin, who hosted the gala from his home in Montreal, along with Peter Gelb, the general manager, in his apartment in Manhattan.

Rather than keeping the musicians together with a mechanical “click track,” everyone recorded their parts by following a video of Mr. Nézet-Séguin air-conducting. The results were beautifully responsive, especially when the players were joined by Met choristers for “Va, pensiero” from Verdi’s “Nabucco.” The tiny squares on my computer screen — I counted around 90 musicians — crowded together did evoke how gathering closely is central to the performing arts, especially opera: from orchestra players packed in the pit, to the choristers and soloists onstage, to the audience members in their seats.

The final offering was Anna Netrebko singing a Rachmaninoff song, a performance prerecorded in a studio in Vienna. Just a few months ago she was the star of an exciting New Year’s Eve gala at the Met. That event, Mr. Nézet-Séguin said ruefully, now seems so long ago.

Indeed. In a matter of weeks, the performing arts have been confronted with devastating challenges. The Met’s orchestra players and chorus members have not been paid since the end of March (though their health benefits continue), a state of affairs that, unfortunately, went unmentioned during the gala, for which the participating singers generously donated their performances.

It is, as Mr. Nézet-Séguin said, a “strange and terrible time.” But in his final words, he spoke directly to music students, urging them not to give up on their passion.

Re: The Met Opera’s At-Home Gala: Informal Yet Profoundly Moving

We missed it too, as it happened during a time when I'm not functional due to my sleep disorder, and I wasn't aware it would remain available afterwards. Still, a memorable occasion, emphasizing how terribly disruptive the coronavirus has been to all our lives.

At this point, I sincerely doubt that the MET as well as the rest of the NY arts scene will be able to re-open in the Fall.

Re: The Met Opera’s At-Home Gala: Informal Yet Profoundly Moving

Brian some of the segments are available at youtube-Sue and I watched some of them-we weren't too impressed but of course hope it helps the Met-as for the upcoming season they already sent me my assigned seats and they were closer to the front than in the past-they usually bill me only when the tickets arrive but this year they already charged my credit card. Regards, Len
Top
Post Reply
3 posts • Page 1 of 1