Caught this article before heading out to the garden-there's much to do and the next 4 days are supposed to be beautiful-meantime the birds are eating us out of house and home1 Hmmm, could this work for opera? Regards, Len 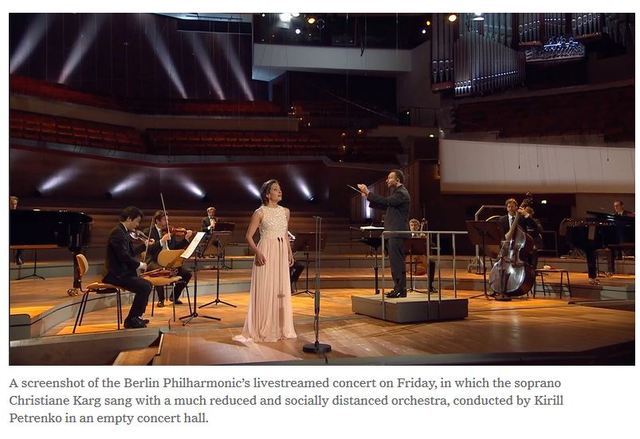 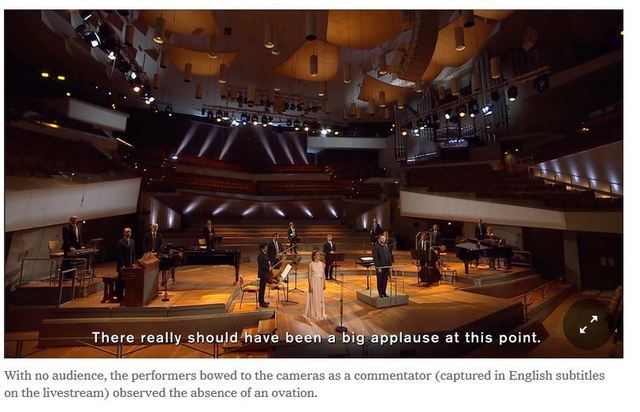 On March 12, the mighty Berlin Philharmonic went ahead with a concert it had scheduled before the coronavirus outbreak. I watched it from my apartment in New York, and it was like little I had ever seen: a livestreamed performance in an empty hall. It was uncanny, and intensely moving, to realize that the only audience was us watching in our homes around the world.

Further lockdowns and restrictions on gatherings followed, and concerts like that one vanished. Even without an audience, after all, it’s hardly safe for dozens of musicians to be crowded onstage.

But in some places where the virus seems to be ebbing, including Germany, those restrictions have begun to be relaxed. And orchestras, like other businesses, are seeing if they can find a gradual path out of hibernation.

On Friday, the Berliners were supposed to have played their annual, widely broadcast European Concert in Israel, as part of the German president’s state visit. The whole visit was canceled because of the pandemic, but the Philharmonic went ahead with its performance at its hall in Berlin: the first major classical event to venture, as it were, out of lockdown.


The concert — which will be repeated on the orchestra’s Digital Concert Hall platform on Saturday — was organized to conform with local health regulations. No more than 15 musicians could be onstage at a given time, making this a de facto chamber event. The players were kept two meters (about six and a half feet) apart — except for wind players, spaced five meters (about 16 and a half feet) from one another and their colleagues.

The original plan was to have string players and percussionists wear protective masks — but after the first rehearsal, according to an orchestra spokeswoman, health authorities allowed the musicians to perform without masks so long as they wore them backstage. All the participating musicians were tested for the virus before the start of rehearsals.


It’s hard to overstate what a departure from the norm this setup represented. Normally, musicians in chamber ensembles and orchestras try to sit as close together as possible without getting in each other’s way, to add cohesion to the overall sound and help players hear each other.

Yet though the seating arrangement was strange — and it was momentarily odd to see a conductor and concertmaster bow to each other rather than shake hands — it was also inspiring to see musicians trying to find some way, however awkward, to keep making live art. And the program chosen by Kirill Petrenko, the Philharmonic’s music director, spoke to this moment of disruption and fear; plumbed spiritual realms; and offered consolation.

He began by leading Arvo Pärt’s “Fratres,” in a version for 12 strings and percussion. Softly rustling riffs and scratchy-sounding strings hover over an eerily subdued yet ever-present sustained low bass tone. A lone percussionist played quiet rumblings from a lower balcony near the stage.

Stagehands — in masks — appeared to move seats around and replace scores on stands. Then the musicians performed Ligeti’s “Ramifications,” a short piece for 12 players in which soft yet restless fragments and ethereal sounds spin forward with scant sense of rhythmic definition or pulse. Ligeti also experimented here with what he called “mistuned” sonorities, to lend a disorienting allure.

Barber’s poignant Adagio for Strings — music that is often performed at memorial gatherings — seemed an all too obvious choice for the moment. Yet this performance, while reverent and restrained, was uncommonly direct, with clear phrasing, transparent textures and no milking of emotion. I’ve seldom been so affected by a performance of this powerful work.


Mahler’s Fourth Symphony was performed in a 1921 arrangement for chamber orchestra by Erwin Stein, prepared for the private concert series that Schoenberg presented in Vienna. The playful, bucolic elements of the symphony came through with special charm, color and specificity in this chamber version — but so, too, for me, did the music’s somberness and hints of weighty tragedy. The final movement, a setting of a poem from “Des Knaben Wunderhorn” that offers a child’s idealized and beguiling vision of life in heaven, was especially lovely, and meaningful, here, with the soprano Christiane Karg a radiant soloist.

Is this what orchestras will look — and sound — like in the near future? We’ll see. While this was hardly a perfect solution for those of us craving live performance, I’ll take it for the time being. And I felt privileged to have heard it when Ms. Karg, Mr. Petrenko and the players stood in silence at the end and bowed to the online audience.