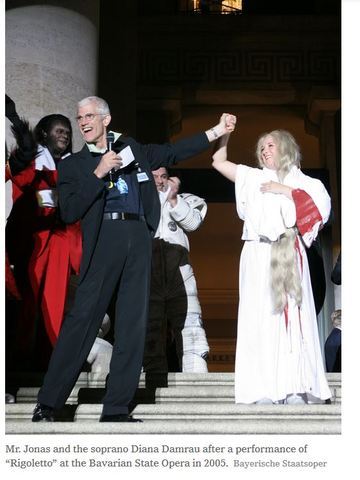 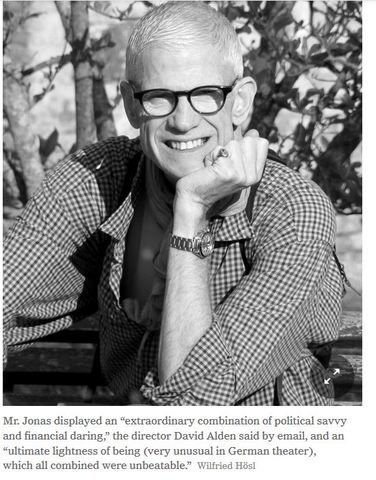 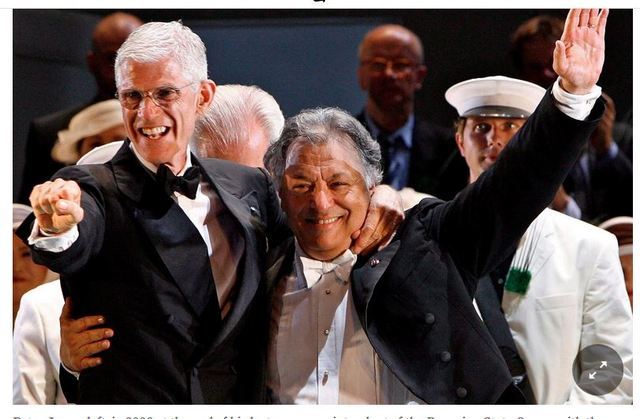 He ran first the English National Opera and then the Bavarian State Opera, emphasizing vibrant theatrical interpretations as well as high musical values.

Peter Jonas, an impresario who turned the English National Opera in London and the Bavarian State Opera in Munich into influential hotbeds of innovation, died on April 22 in Munich. He was 73.

His death was announced by the Bavarian State Opera, which said he had struggled with cancer for 45 years.

Mr. Jonas was general director of the English National Opera from 1985 to 1993 and intendant (executive and artistic director) of the Bavarian State Opera from 1993 to 2006. Throughout his career he encouraged directors and designers, along with like-minded conductors and singers, to take bold interpretive approaches to the great yet elusive and multilayered operas of the past.

“That opera does not yield its riches easily is something to be treasured,” he said in a 2005 interview with The International Herald Tribune. “Accessibility is a good thing, but you can’t go so far as to make opera as easy as going to the sauna,” he added. “The element of surprise is very important.”

His aesthetic was exemplified by a 1989 London production of Verdi’s “A Masked Ball” (“Un Ballo in Maschera”), directed by David Alden, who became a frequent collaborator.

The set was dominated by a hanging tilted clock, a symbol of fate, which straddled a “huge, massive suspended horse on which rode the Grim Reaper,” as Mr. Jonas recalled in a 2012 interview with The New York Times. The staging caused a sensation. Yet “when all the hullabaloo died down,” he said, it “made one understand why the piece was censored.” In Verdi’s day, an opera about regicide was deemed incendiary.

Mr. Jonas’s risk-taking approach to dramaturgy went along with a tenacious commitment to high musical standards and a determination to broaden the repertory. He championed overlooked 20th-century works, reached out to living composers and presented many premieres. Yet he also made the case that Baroque operas were not just fare for early-music aficionados but also compelling music dramas that in contemporary productions could hold the stages of major houses.

And he had an “extraordinary combination of political savvy and financial daring,” Mr. Alden said by email, as well as an “ultimate lightness of being (very unusual in German theater), which all combined were unbeatable.”

Peter Jonas was born on Oct. 14, 1946, in London. His father, Walter, a Jewish native of Hamburg, fled Germany in 1933 and moved to England, where with his background in industrial chemistry he ran a dye works and became a factory director. There he met another émigré, Hilda Ziadie, who was of Jamaican and Lebanese heritage and had worked as a fashion model in Paris.

Peter revered his one sibling, a sister, Kathryn, five years older, whom he credited with providing him lifelong artistic inspiration. She died at 25 in a car accident.

Mr. Jonas attended the Worth School in Sussex, then studied English literature at the university there. After working as an extra and stagehand at the Glyndebourne Festival, he studied opera and music at the Royal Northern College of Music in Manchester and, later, the Royal College of Music in London.

Thinking he might become a baritone, he studied at the Eastman School of Music in Rochester, N.Y., and met Patrician Richards, a soprano, to whom he was briefly married. In 1973 he began a long relationship with the soprano Lucia Popp.

It seemed a vote of confidence, if risky, when in 1984 Mr. Jonas, then just 37, was chosen as general director of the English National Opera. He believed in the company’s “wonderful, consistent tradition” of bringing “opera to the people in the most direct possible way,” he said in a New York Times interview that year.

Dismissing the Royal Opera at Covent Garden in many interviews as “international opera for people who can afford it,” Mr. Jonas made the English National Opera a place where social, political and psychological elements of repertory works were brought out in theatrically daring, musically distinguished productions. He also fought with back-office managers who worried about balance sheets and became an outspoken agitator for government support of the arts.

His appointment as intendant at the Bavarian State Opera was announced in 1991, two years before he arrived. Mr. Jonas, who spoke fluent German, was the first British national to run a major German house.

The company, by many accounts, had grown artistically timid, in part because of the influence of its music director, Wolfgang Sawallisch, an eminent conductor but conservative in his attitude toward repertory and staging.

That changed after Mr. Jonas arrived. Musical standards, too, which many critics felt had been slipping for years, were stabilized in 1998 when Mr. Jonas brought in Zubin Mehta as music director. During the glory years of his tenure, Mr. Jonas touted the Bavarian State Opera as arguably the world’s busiest theater, typically with some 360 performances a year of 50 operas and 20 ballets, as well as a postseason festival that often presented 30 operas over six weeks.

While still in London, after his relationship with Ms. Popp ended, Mr. Jonas married Lucy Hull in 1989; they divorced in 2001. In 2012, after several years together, Mr. Jonas and Barbara Burgdorf, a concertmaster of the company’s orchestra, were married. She survives him.

Mr. Mehta and Mr. Jonas stepped aside the same year, 2006. Mr. Jonas, who had grappled with recurring hospitalizations and treatments for cancer, said he wanted to walk the length of Europe, from Inverness in Scotland to Palermo in Sicily.

He and Ms. Burgdorf “almost truly did it, in spurts,” she said by phone, over more than 10 years, and he reconnected with the European concept of freedom,