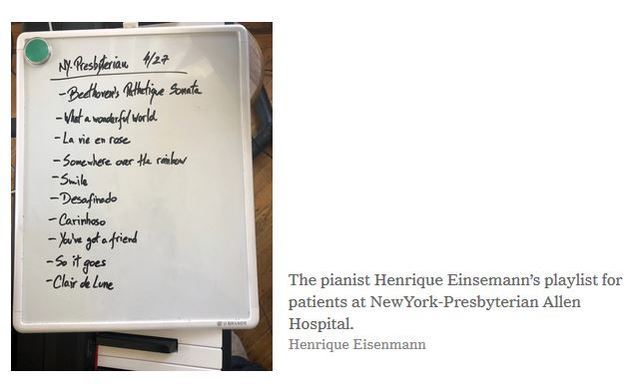 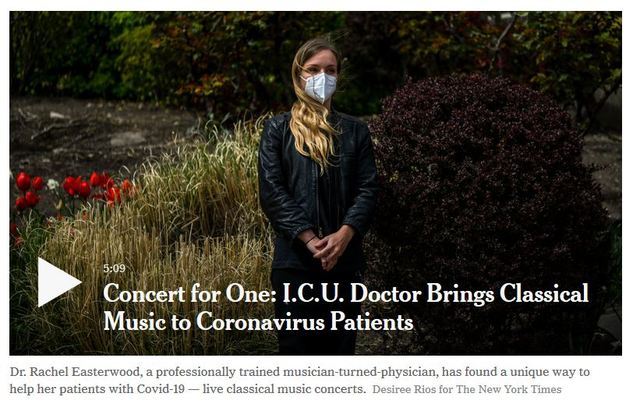 An I.C.U. doctor felt despair at how little could be done for the sick. Soon, she had musicians playing over the phone in hospital rooms.

But at NewYork-Presbyterian Allen Hospital in Manhattan, the music of Bach, Brahms and even the Beatles has begun wafting through patient rooms, played by accomplished performers — recently out-of-work chamber music players; winners of international competitions and prizes; teachers at prestigious music schools.

They perform from California, Kentucky, Maine, Virginia, Massachusetts and New York, where they are sheltered in place. The music plays through an iPhone or iPad placed at the bedside of patients who indicated they wanted to hear a performance, using FaceTime’s audio-only feature to protect their privacy.

“I’m hoping to offer a brief moment of comfort or distraction or beauty,” said Michelle Ross, a violinist in Manhattan who has performed for the patients.

At the Allen Hospital, which is at the northern tip of Manhattan and serves a community that is largely low income and minority, the toll of coronavirus cases has been particularly devastating. Last week, a top emergency room physician at Allen died by suicide, putting a spotlight on the struggles at the small hospital.

At times, the 200-bed hospital has had as many as 170 coronavirus patients; by early April, there were 59 patient deaths, The New York Times has reported.

It was around that time that the concert idea blossomed. Dr. Rachel Easterwood, who works the night shift in the I.C.U., had despaired at how little could be done for some patients. “I just felt desperate actually, and helpless,” she said. “People are dying left and right.”

One evening off, she listened to a cellist friend in California play Bach for her over FaceTime. Dr. Easterwood, 35, who played clarinet professionally before going to medical school, found the music comforting.

“Man, I wish we could do that in the hospital,” she told her friend, as he recalled the conversation. At that moment, the idea about playing for patients clicked.


Some of the patients were on regular floors, awake and able to communicate. Others, in I.C.U. beds, were on ventilators and heavily sedated.

In those cases, Dr. Easterwood said, she called families to obtain permission for a performance to be played. She hoped even those patients might be comforted in some way.

She soon expanded the concerts to harried staff members who were being challenged like never before, exposing themselves to health risks, living apart from families and sharing the sadness of patient deaths. On one shift, workers gathered at a nursing station near midnight to hear Mr. Janss play a cello solo.

“We clapped for him and we asked for one more song,” said Anna Kosmider, a physician assistant. “It’s hard to find those moments of happiness at work.”

Dr. Easterwood also found solace in Mr. Janss’s performance. “It was comforting to me,” she said, “because I, as a doctor, was hurting.”

Last Monday, hours after news of the death of their physician-colleague, a short concert was arranged for members of the Allen emergency room staff. More than a dozen employees crowded in a break room to hear Mr. Janss play selections from Bach, Edith Piaf, Saint-Saëns and Elton John. The performance was subdued and somber.

Dr. Easterwood, a 2006 graduate of the Manhattan School of Music, obtained her medical degree in 2014 at Columbia University College of Physicians and Surgeons. She completed a residency in internal medicine and became an attending physician at Allen last year.
Sign up to receive an email when we publish a new story about the coronavirus outbreak.

She said she always assumed music would be a part of her life — she keeps her clarinet — but there was little time to play as she began her medical career.

In April, she was working night shifts covering the intensive care unit at Allen.

“That’s the most difficult of all the shifts,” said her supervisor, Dr. Zorica Stojanovic, medical director for Allen’s hospitalist physicians, “because everyone is most of the time walking the fine line between life and death.”

On April 2, Dr. Easterwood had her serendipitous conversation with Mr. Janss.

The concert idea was a natural for him and Ms. Carr, the violist, who together recruited the musicians. They co-direct Project: Music Heals Us, a nonprofit Ms. Carr founded that organizes free classical concerts in nursing homes, hospices, prisons, homeless shelters and refugee centers.

The pandemic had brought its work to a halt, and its stable of freelance musicians also were having performances canceled. (To support the musicians, the group said it had decided to pay them $100 apiece for any three-hour period they are on call to perform the coronavirus concerts.)

Dr. Stojanovic did not hesitate, saying in an interview that the idea was a wonderful one given the calamitous times. “What can disrupt this pattern of despair is the music,” she said.

On April 7, Mr. Janss, in his apartment in Oakland, Calif., played the first concert — a 15-minute cello set that began with Bach.

Later that day, a trio in Kentucky played for 75 minutes for another patient. The musicians included Ms. Carr, who teaches at the Juilliard School and Bard College; her husband, the cellist Oded Hadar; and Anna Petrova, who teaches piano at the University of Louisville. (All three were quarantined at Ms. Petrova’s home while Mr. Hadar recovered from coronavirus symptoms.)

Ms. Petrova also played Chopin briefly for another patient who responded over the phone, “‘I love music. Thank you. You made my day,’” Ms. Carr recalled.

Performances followed on nights when Dr. Easterwood could find time. For the musicians, who typically feed off live audience reaction, playing on the phone for heavily sedated patients on ventilators amid the sounds of beeping monitors could be surreal.

The musicians have drawn from their own playlists that include Schubert, Schumann, Beethoven and Rachmaninoff, as well as George Gershwin and Andrew Lloyd Webber. They have played “All My Loving” and “Something” by the Beatles, and a viola-and-cello arrangement of “Over the Rainbow.”

Miki-Sophia Cloud, a violinist in Boston, said she played Bach for a patient who wanted to hear something relaxing. She could hear the patient coughing, and she took out her viola, which has a lower range of notes.

“I just played the low strings in a very calming, steady, slow rhythm for about 30 minutes,” she said.

Perhaps no composer’s work has been played more often for the coronavirus patients than Bach, Dr. Easterwood said, describing his music as soothing, uplifting and “kind of a melancholy that people appreciate.”

Some of the musicians said they found playing for the patients deeply emotional, and they have cried while performing.

The music has also stirred emotion in patients.

Dr. Easterwood said she left her phone by one older patient’s bedside, and returned after the performance to find the patient smiling.

“I realized I had never seen a patient smile this entire time,” she said.

By April 16, about a dozen concerts had been held for patients and staff members, Dr. Easterwood said. But that day, she began to feel ill, experiencing virus symptoms. She was tested, and went home. The test came back negative.

Until she could return to work, two other physicians — Ricky Regalbuto at Allen and Mike Robbins, an emergency department doctor at Columbia University Irving Medical Center — volunteered to arrange performances at each hospital.

Dr. Robbins said one patient’s face just “lit up” when he offered a concert. Minutes into the performance, though, the music was ended when the patient had to be intubated, he recalled.

Last Monday, Dr. Easterwood returned to the night shift at Allen, where she arranged two 45-minute concerts for patients on ventilators, each by the pianist Henrique Eisenmann in Brooklyn. Dr. Easterwood said this week that she hoped to continue the performances for patients and the staff.

“We go into this profession to help people,” she said. “And this music had the ability to at least help a little bit.”

Re: These Are the Bedside Concerts Comforting Virus Patients

Very moving story, Len. There is no question that music provides comfort in trying times. Thanks for posting this.
Top
Post Reply
2 posts • Page 1 of 1