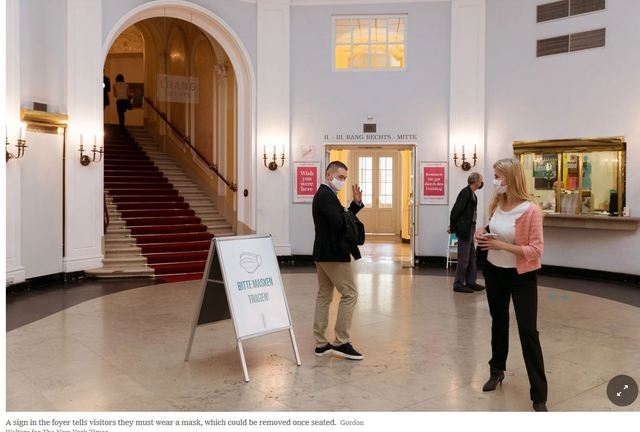 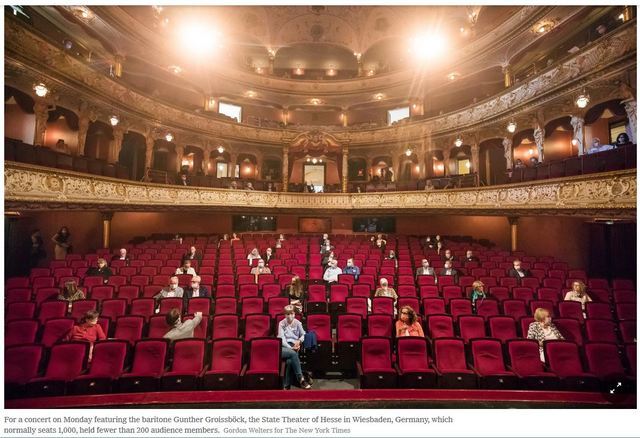 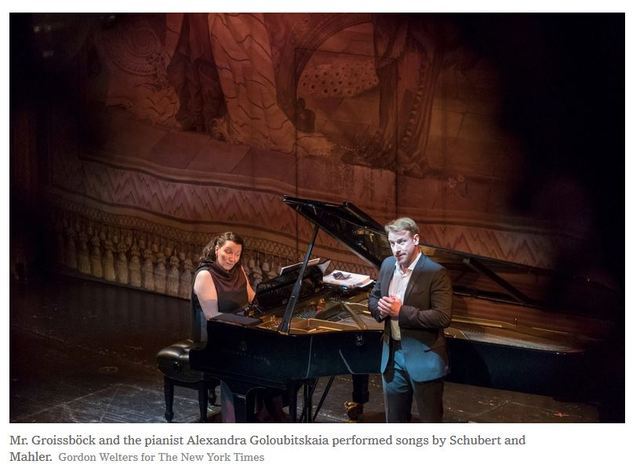 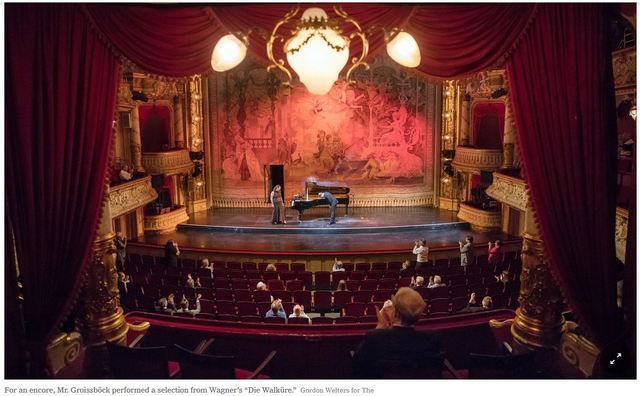 WIESBADEN, Germany — Normally, when a performer peers beyond bright stage lights into a darkened theater and sees every fourth seat occupied, it’s not a good sign.

At least three empty seats separated every occupied one in the neo-Baroque auditorium, which normally holds 1,000 but accommodated fewer than 200 on Monday. This was by design, part of a hotly debated and potentially risky attempt to revive live performance as the first wave of the coronavirus pandemic ebbs in Europe. Wiesbaden’s concert could serve as a model for other theaters — or as a warning, if anyone who attended gets sick.

Although Mr. Groissböck understood the social-distancing rationale for the empty seats, it still felt strange, he said in an interview following his performance of works by Schubert and Mahler.

“At the beginning it felt almost like an art installation, an experiment,” he said. “But from song to song, it very quickly became something very human.”

Concertgoers were required to wear face coverings to the theater, though they were allowed to remove them once seated. Tickets came without seat assignments, and members of a household could sit together. The theater recorded everyone’s name and address, so they could be contacted later in case someone turned out to be infected.

The driving force behind the event was Uwe Eric Laufenberg, a veteran actor who is the Wiesbaden theater’s director. Not everyone is happy about his aggressive push to restart live performances. Last month, Mr. Laufenberg stirred a political firestorm when he called government-mandated restrictions a violation of the German constitution and suggested reaction to the pandemic was overblown. He was accused by some commentators of echoing the arguments of right-wing groups that have protested measures designed to stop the virus’s spread.


Mr. Laufenberg said in an interview that some theater employees had reservations about opening so soon. But the performance on Monday, the first in a series that continues daily through the first week of June, is part of a general return to normal in Germany, where the growth of new cases has fallen well below 1 percent.

The country is ahead of the curve in reviving its culture sector. Shops, hairdressers and nail salons are also taking customers again, and schools are operating on abbreviated schedules. In the state of Hesse, of which Wiesbaden is the capital, restaurants and gyms have been allowed to reopen, provided visitors observe distancing.


Elsewhere in Europe, governments are also taking steps to get music lovers back into concert halls. Austria announced last week that events of up to 100 people, with social distancing, can be held starting May 29. In August, a new limit of 1,000 people has been proposed, if an event’s organizers present a safety plan for government approval — a development that led the Salzburg Festival, one of Europe’s grandest summer traditions, to announce that it hopes to go ahead with performances, in some form.


In Italy, the government passed a decree on Monday allowing concerts starting June 15, so long as they meet certain conditions, including everyone involved — musicians as well as audience — remaining at least one meter, or about three feet, apart.

Mr. Laufenberg said that putting on a concert while respecting health guidelines involved negotiating with officials and reprogramming the theater’s ticketing software in less than three days. Barriers were erected to funnel the audience into the theater without crowding. Signs were put up to direct the flow of foot traffic and explain anti-contagion measures. Hand sanitizers were placed at strategic locations.

“It’s easier to close a theater than to reopen one,” Mr. Laufenberg said.

During intermission, wine, pretzels and other refreshments were served outdoors from a food cart near the colonnaded theater entrance, instead of in a foyer, like normal. Luckily the weather on Monday was clear and warm.

“It’s not the atmosphere we’re used to,” Wolfgang Allin, an Austrian architect who has a home in Wiesbaden, said shortly after he and his wife, Angelika, took their seats in the balcony. “But you have to take it as it comes.”


The idea for the performance on Monday grew out of discussions between Mr. Laufenberg and Mr. Groissböck, who worked together last year on a staging of Richard Wagner’s “Parsifal” at the Bayreuth Festival in Germany (which has canceled this year’s productions).

Mr. Groissböck was at his home in Switzerland, he said, trying to stave off depression. “We get along well,” he said of Mr. Laufenberg, “and we share the same rebellious attitude” toward the restrictions.

The baritone chose the title of the concert, “My Spirit Thirsts for Action, My Lungs for Freedom,” a line from Schiller. He said it expressed his frustration with the lockdown.

Mr. Groissböck and Alexandra Goloubitskaia, the pianist who accompanied him, accepted drastically lower fees than usual. “Money is the last priority at the moment,” he said, adding: “I’m overjoyed this is even happening.”

For an encore, Mr. Groissböck sang an excerpt from a role he was scheduled to perform at Bayreuth if the pandemic had not interfered: Wotan’s Farewell from the end of Wagner’s “Die Walküre.” The audience was ecstatic, making up in volume what it lacked in numbers.

But Mr. Laufenberg said that performances like this were not a permanent solution, either financially or artistically. “If you want to tell the story of Romeo and Juliet, they aren’t going to be able to follow social distancing rules,” he said. “I can’t imagine that. I don’t want to imagine it.”

Re: An Audience Comes Out of Lockdown for Schubert and Mahler

This was an interesting experiment. I hope it works for the sake of small scale productions. Of course it's not possible for a full orchestra and/or chorus, but for recitals it might work. Good luck to them!
Top
Post Reply
2 posts • Page 1 of 1