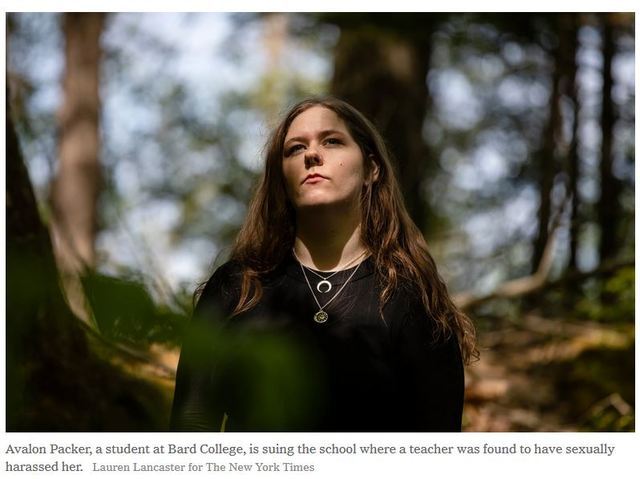 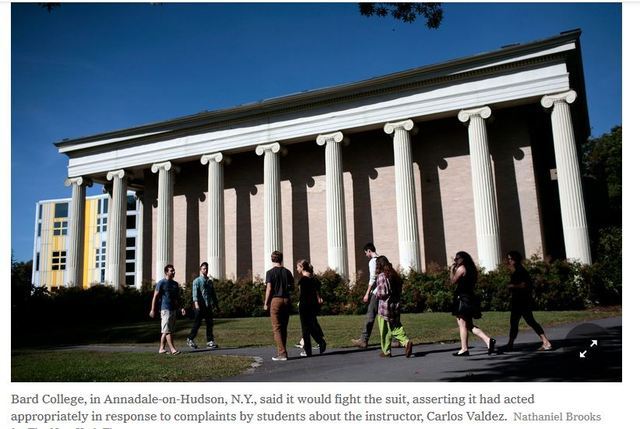 This article caught my eye-I'm still waiting to hear from Bard if they're cancelling the opera in early Aug I bought tickets for-King Arthur(Le roi Arthus)by Ernest Chausson. Regards, Len

The teacher was fired, but the suit says he should not have been on staff because of prior complaints by other students.

A music instructor at Bard College was fired this year after a Title IX investigation determined he had sexually harassed a young percussion student. Now, the student is asserting in a lawsuit against the college that the instructor should not have been on staff because of prior harassment complaints that the school knew about.

In the federal suit filed on Tuesday in Manhattan, Avalon Packer, 21, a percussionist who started at Bard in 2016, accuses Carlos Valdez, the percussion teacher, of rubbing up against her while he had an erection during a lesson, and later forcibly kissing her.

Though Mr. Valdez was fired this year after an investigation found Ms. Packer’s account credible, her lawsuit says that she learned while reviewing the investigator’s notes from her case that Mr. Valdez had been the subject of two other complaints under Title IX, a federal law that bars sexual discrimination in institutions that receive federal funds.

The lawsuit says that the previous complaints were also substantiated by an investigation, which recommended that Mr. Valdez be terminated. But instead, it says, the college allowed him to continue teaching after making a written apology and taking an online anti-harassment course.

“They obviously protected somebody who didn’t deserve protection, when in fact their whole commitment is to protect students,” Ms. Packer said in an interview.

In a statement on Wednesday, the college disputed Ms. Packer’s recounting of the prior case, saying Mr. Valdez, a part-time instructor, had been terminated at the conclusion of the earlier investigation but was reinstated on appeal after agreeing to abide by a variety of conditions.

“Bard College takes all complaints of sexual misconduct with the utmost gravity,” the statement said.

Mr. Valdez, 66, who had disputed Ms. Packer’s account, did not respond to messages via phone or email. He is not named as a party to the lawsuit. The suit names Bard’s president, Leon Botstein, a music scholar and conductor who has run the school for 45 years, as one of the defendants.

Ms. Packer, who was raised in Alaska, said she took up percussion as a child and later attended the Manhattan School of Music. “My goal with going to Bard College, I wanted to really be able to study all types of percussion,” she said.

Even before she began her freshman year in 2016, she said in her lawsuit, Mr. Valdez messaged her from his personal Facebook page, gave her his phone number and invited her for a private tour of the campus, in Annandale-on-Hudson, N.Y. He said that he had watched clips of her performing, she said in the lawsuit.

Ms. Packer was flattered and excited. “In the beginning, he always told me I was very talented and better than everybody else at percussion,” she said in an interview.

But within months, Mr. Valdez began showing her unwanted attention, Ms. Packer said in the suit, including massaging her back as she played, saying he was fixing her posture. He also regularly pressed himself against her back, she said, including once in the fall of 2016 when she could feel his erection.


In February 2017, she says in her lawsuit, Mr. Valdez suddenly grabbed and kissed her without her consent. From then on, she said in the suit, she stopped going to private lessons with him, saying she had an injury.


Not long afterward, the lawsuit says, she ran into him on campus and he warned her against making a Title IX complaint because “he always wins.”

Ms. Packer said in an interview that after the last incident she withdrew, socially and scholastically, her grades dropped and she grew depressed. “The amount of anxiety I was carrying, I wasn’t even able to perform,” she said.

In 2019, she described her experiences to a faculty member at the school who helped direct her toward a Title IX complaint, she said in the interview. The investigator found that Mr. Valdez had violated the school’s Gender-Based Misconduct Policy and created a hostile environment for Ms. Packer, according to a letter from Malia K. Du Mont, Bard’s chief of staff and vice president for strategy and policy, that was filed as part of the case.

The letter acknowledges that some of Mr. Valdez’s colleagues and students told the investigator that they had seen the instructor hug and massage students without their consent and that the instructor had not changed his behavior “despite previous warnings.”

When Ms. Packer was permitted to look through summaries from the investigator, her suit says, she learned that Mr. Valdez had been the subject of two other Title IX cases, including one from the 2014-2015 school year in which a student was also “hugged, grabbed, and kissed” without her consent.

The school said in its statement that Mr. Valdez was fired as a result of the earlier investigation but reinstated on appeal about a month later, after agreeing “to adhere to remedial measures to address his conduct, including counseling and training.”

“The College administration,” the statement said, “also made unannounced visits to his class sessions and tutorials to monitor his actions.”

Ms. Packer, who took a leave of absence from the school during the investigation, and is now slated to graduate in December, has been working at UPS. She said her interest in music remains, though she no longer dreams of performing for a living, and instead wants to become a music therapist.

Her lawyer, Ali Frick, said her client understands that colleges cannot protect students from everything. “But this was preventable,” Ms. Frick said.

In other words :
Bard re-hired him.
Are percussion instructors difficult to find ?
Top

There are creeps in every profession. Music, sadly, is no exception. I'd be willing to bet that almost every musician has had a similar experience at one time or another. Promising careers are put on hold or given up all the time because of this nonsense. Hopefully, things are changing now for the better.
Top