A Philip Glass Score Was Lost. 50 Years Later, Here It Is

A Philip Glass Score Was Lost. 50 Years Later, Here It Is 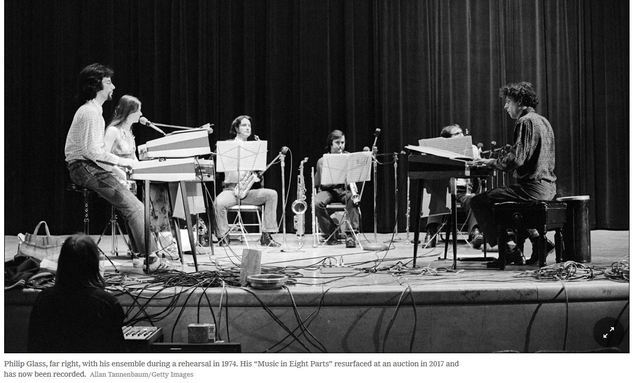 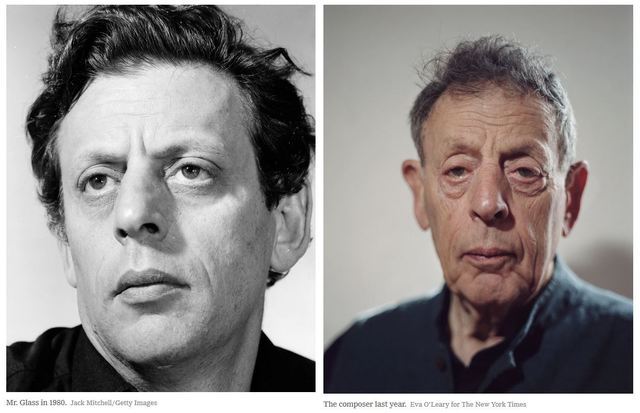 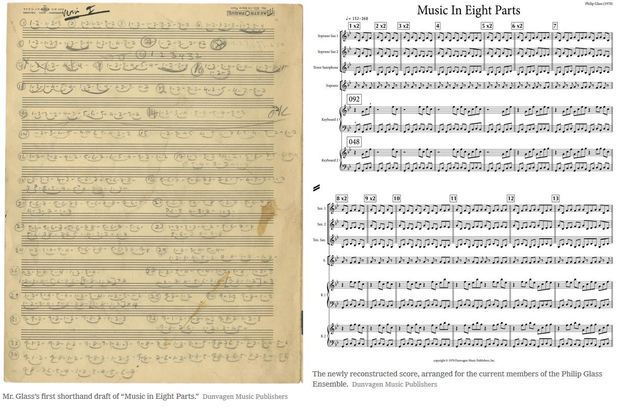 A Philip Glass Score Was Lost. 50 Years Later, Here It Is.

“Music in Eight Parts” has finally been reconstructed and recorded.

In the early 1970s, Philip Glass was already writing masterpieces and performing them with his ensemble in lofts, galleries and museums. But he wasn’t quite making a living as a composer yet.

He made ends meet by working as a mover, plumber and taxi driver. And by selling autograph scores — including, it is believed, the one for his 1970 work “Music in Eight Parts,” which was performed just a handful of times and was later thought lost. For decades, it seemed, to Mr. Glass’s circle, to exist only as fragments in his archive.

Then the final manuscript for “Music in Eight Parts” resurfaced near the end of 2017, when it came up for auction at Christie’s. Sold for $43,750, and now in the hands of Mr. Glass’s publisher, it has been realized anew for his ensemble and, 50 years after its premiere, released on a recording by Orange Mountain Music this week.

“If you’re a Picasso fan and you walk into a room full of early Cubism, and there’s a painting there that you’ve never seen before, it’s like that,” said Lisa Bielawa, a composer and a vocalist in the Philip Glass Ensemble. “It’s right at the center of the authentic early period, right in the middle of it.”

Mr. Glass’s sketches for “Music in Eight Parts” date to late 1969, and it premiered in January 1970, placing it between “Music in Fifths” and “Music With Changing Parts,” which paved the way for the monumental “Music in 12 Parts.” The title refers not to the number of sections, but to its contrapuntal voices; with a running time of about 20 minutes, “Music in Eight Parts” achieves its drama through rhythmic shifts and intricacy.

Alex Gray, an assistant with Dunvagen Music Publishers, who began to reconstruct the “Music in Eight Parts” score as an intern there a year and a half ago, said that it fit neatly into Mr. Glass’s experiments of the time, while working through a distinct idea.

“Everything he’s writing up to this point is about additive rhythm,” Mr. Gray said. “This is the first time he tried to take what’s typically horizontal and apply it vertically. You see it a little bit in ‘Music in Similar Motion’ — adding a new voice and adding a new voice, every couple of minutes. In this one, you literally see it expanding note by note.”

Yet “Music in Eight Parts” didn’t become a repertory staple. By the time Michael Riesman, now the music director of the Philip Glass Ensemble, joined the group in the mid-1970s, he said, “It was already fallen by the wayside.” He never played it.

When the piece came up for auction — and caught the attention of Mr. Glass’s staff — Mr. Gray found himself transfixed by the manuscript, which was written in shorthand, and asked the composer why it had been shelved.

“I just started writing ‘12 Parts,’ and I had a better piece to play,” he recalled Mr. Glass saying, with characteristic nonchalance.

But Mr. Glass was supportive of his ensemble returning to “Music in Eight Parts” now. And Mr. Gray, who finished his master’s degree at New York University this week, advised by the Bang on a Can composers Michael Gordon and Julia Wolfe, made a thesis out of the project of turning the manuscript into a conventional score and synthesizer demo, then analyzing it and cataloging its history.

The work’s original instrumentation was based on that of the Philip Glass Ensemble at the time. But the newly engraved score is based on the group’s current members; it loses viola and cello parts, for example, and adds a solfège vocal line for Ms. Bielawa. Such an arrangement is not without precedent: Mr. Riesman and Ms. Bielawa worked on a similar one for a version of “Music With Changing Parts” that played Carnegie Hall in 2018.

“The experience of updating ‘Music With Changing Parts’ is what gave me the idea of a freer hand with this,” Mr. Riesman said. “Philip said: ‘Let’s make something new out of it. Not changing the original idea, but let’s flesh it out.’”

Revisiting “Music in Eight Parts” has also been the subject of a course at the New School, home of the nascent Philip Glass Institute, where Ms. Bielawa is its chief curator and inaugural composer in residence. (You can guess what the ensemble in residence is.) Students, in addition to learning the piece, sat in as the Glass players worked toward re-premiering and touring it this spring, with a recording to follow.

Plans changed, however, when the coronavirus pandemic closed the school and canceled virtually all concerts indefinitely. But the ensemble decided that, rather than wait to record it, they would put their rehearsals to use and lay down the track. (Ms. Bielawa, Mr. Riesman and Richard Guérin produced the album.)

The project came together quickly. For the cover image, they turned to the estate of Sol LeWitt, a friend and collaborator of Mr. Glass’s who had designed the covers for the “Music in 12 Parts” LPs in the 1970s. (Mr. Glass has also told stories about how LeWitt would, unprompted, send him thousand-dollar checks during those years.)

Another curveball came about a week before the recording took place. Seeing an announcement of the album on Facebook, someone commented, claiming to have archival audio from 1970. It was very different from what the 21st-century ensemble had been rehearsing — not only in the timbre of its voices but also in its much-slower tempo. It was informative, though the players stuck to their current interpretation.

Recording in quarantine was difficult — everyone alone at home, working from a baseline track — but not impossible, especially for this ensemble. “When we’re onstage, we’re not hearing each other acoustically anyway,” Ms. Bielawa said. “You can’t. So the actual sonic experience, for me, was not that different.”

One challenge was finding a substitute for cues typically delivered as conductor nods. Mr. Riesman, who laid down the first track for the rest of the players, came up with a snare drum roll followed by a rimshot. It worked; and the final product shows no signs of being recorded so unconventionally.

It’s not clear when the piece will be played onstage; the next scheduled live performance is a concert planned for this fall in Athens. But no matter when that moment comes, “Music in Eight Parts” is finally back in the repertory.

Re: A Philip Glass Score Was Lost. 50 Years Later, Here It Is

At least they don't have to speculate about "what would the composer have done with this?" They don't have to bring in a Deryk Cooke, for instance, to flesh it out.
Top
Post Reply
2 posts • Page 1 of 1