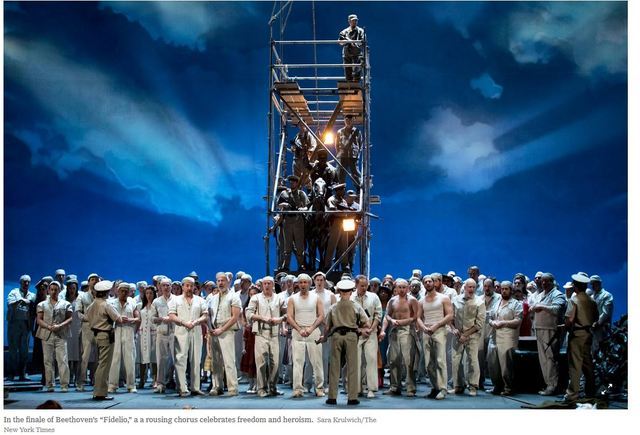 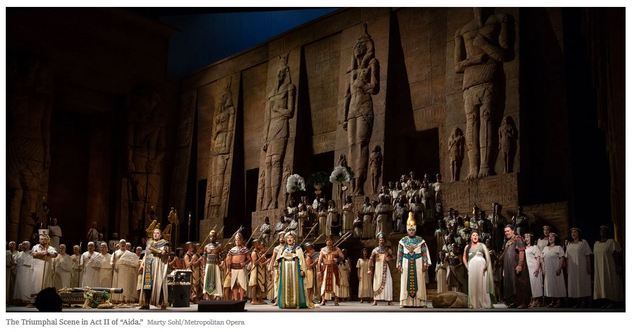 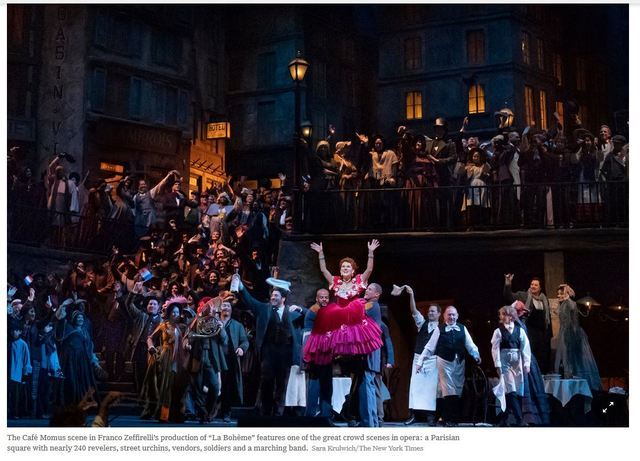 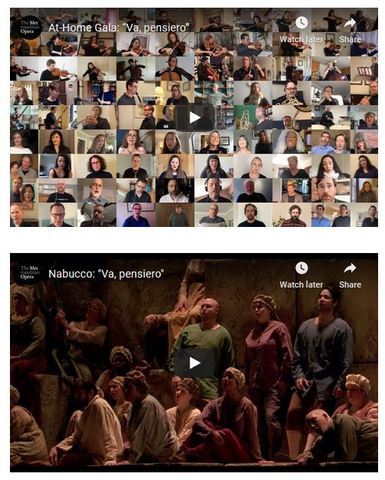 Most of Verdi’s “Aida” is focused on intensely dramatic scenes for only one, two or three singers at a time. But it’s crowds that define the experience of this opera.

It’s not just the spectacular Triumphal Scene. In the first act, priests, ministers and military officers, summoned by the King of Egypt, assemble to learn who has been chosen to command their troops against advancing Ethiopian invaders. Full-throated choral outbursts shift from avenging threats against their enemies to stirring expressions of Egyptian resolve.

Crowds are essential to this moment — and, really, to opera as an art form. Choruses fill the stage; musicians cram into the orchestra pit; thousands of people sit shoulder to shoulder in the theater. The Metropolitan Opera, one of the world’s largest houses, seats an audience of nearly 4,000. And it would probably have been packed for the season’s opening night on Sept. 21, the premiere of a new “Aida” production.

But it’s no longer certain when opening night will happen. The Met announced on Monday that its coming season’s performances would be canceled at least until New Year’s Eve, as social distancing measures to curb the coronavirus pandemic continue to keep theaters across the United States shuttered. Opera fans will have to endure once-unimaginable disappointment, though this loss is nothing compared with the devastating impact that the virus has had on countless lives, and that the shutdown has had on the livelihoods of artists and innumerable backstage staff.


Of course, opera revels in glorious solo voices; I’ll never forget my first “Aida,” starring a radiant Leontyne Price, when I was a teenager. Yet in this dismaying moment, as an opera lover, a Met regular and a New Yorker, it’s crowds that I miss the most. They add to the mystique of classical music in spaces of all sizes, from an intimate recital room to Carnegie Hall’s spacious auditorium. In opera, however, they are not only crucial but special: When a rousing chorus breaks out, the audience feels swept away, pulled right into the music and the drama.


Every aspect of going to a Met performance involves mingling closely with others. You take the subway to Lincoln Center. If you’re grabbing dinner with a friend beforehand, you count yourself lucky to have a little table during the preperformance rush at a nearby restaurant. You walk across the plaza, which is usually bustling. Then you settle into your seat and wait for the crowds to assemble onstage.

If the opera happens to be Puccini’s “La Bohème,” in Franco Zeffirelli’s enduringly popular and extravagant 1981 production, the Café Momus scene offers a glorified — some would say prettified — representation of the buzzing streets we in the audience just left behind. The set depicts a small cafe opening into a large square in Paris teeming with nearly 240 revelers, street urchins, vendors, soldiers and a marching band. It’s shamelessly spectacular, musically infectious and utterly enjoyable.

I’ve always been most affected by the crowd scenes in which choristers, following a longstanding convention of the genre, face the audience and voice their phrases collectively. Take the final scene of Wagner’s “Die Meistersinger von Nürnberg,” when the beloved master singer Hans Sachs arrives to attend the annual song contest in Nuremberg. In the Met’s vividly old-fashioned Otto Schenk production, it seems like the entire town has assembled onstage. The choristers, facing Sachs and the audience, sing a stirring chorale in tribute to this decent, modest man, a cobbler, and hail him in full-voiced salutations. It’s a glorious, overwhelming sound.


Another such moment comes at the end of Beethoven’s “Fidelio,” which was to have returned to the Met in November in Herbert Wernicke’s splendid production. Men who have been unjustly jailed by an autocratic governor are liberated and joined by their jubilant wives and children. Everyone sings a rousing chorus, celebrating freedom and hailing the heroism of Leonore, who has rescued her husband, a political prisoner. Beethoven’s ode to joy in this choral scene is just as thrilling as his setting of Schiller’s actual “Ode to Joy” in the finale of his Ninth Symphony.

Solemn crowd scenes can be soberly beautiful, like the chorus of priests at the temple of wisdom in Mozart’s “Die Zauberflöte,” which was to have been presented in a new production by Simon McBurney opening on New Year’s Eve. (Instead, Julie Taymor’s staging will be revived.) During the first act of this fairy-tale opera, the good and bad characters are deliberately ambiguous. But in Act II, the music for the priests — sonorous refrains, and a full-voiced, beautiful chorus — lends them depth and poignancy. For a moment the stage is filled with people who, however flawed, are striving after truth.

Then there’s the feisty crowd in Act I of Bizet’s “Carmen,” which was scheduled to return to the house in October. Workers on break from a Spanish tobacco factory, Carmen among them, are joined in a square by idle soldiers and townspeople. She sings the seductive “Habanera,” likening love to an untamed bird. The crowd echoes her words and cheers her on with collective choral refrains. Who could resist her?

In April, the Met presented an inspiring, four-hour virtual gala with some 40 artists in quarantine performing live from their homes around the world. But there were a few prerecorded offerings, and the most moving one featured members of the chorus and orchestra in an elegant account of “Va, pensiero,” from

This resplendent chorus, with a wistful melody that soars over a simple, steady orchestra accompaniment, is sung by exiled Hebrews who send their thoughts “on golden wings” to their distant homeland. In the Met’s production, the choristers just sit atop stone walls and steps, facing the audience, which makes the music all the more moving: Though far from home, they can at least rekindle sweet memories.

“Nabucco” is slated to return to the Met in March. We have to hope that New York performing arts institutions will be able to welcome exiled artists and audiences home by then.

Hi, Len. Thanks for posting this.

The idea of crowds has taken on a new meaning here in NYC during the past few days. I won't say much, because this is not the place to do so, but crowds have been flowing through our neighborhood, and, while there has been some looting, they've been mostly peaceful. Yesterday shop windows were boarded up with plywood in response to Monday night's destruction. We still feel safe to go out in the afternoon, and we now have a curfew (with exceptions for essential workers) from 8PM to 5:30 AM to run through Sunday. Everyone is in shock. Uber and Lyft cars have been banned from the city, as the criminal looters have been using them as getaway cars, according to our Mayor, but regular taxis are running still. I've not seen anything like this since the 1970's during the blackout.

As for opera, I'm glad that the MET is recognizing reality and closing for the Fall. It's so hard to make plans, but let's hope we have a vaccine by then. There is nothing like the impact of a live performance to a full house. Let's hope that what's going on will pass and we'll be able to get back to normal, civilized behavior. I do miss meeting friends for meals in our neighborhood: there's nothing like a live performance!

maestrob wrote: ↑
Wed Jun 03, 2020 9:40 am
Yesterday shop windows were boarded up with plywood in response to Monday night's destruction. ...As for opera, I'm glad that the MET is recognizing reality and closing for the Fall. It's so hard to make plans, but let's hope we have a vaccine by then.

Brian we've been watching a lot of this on the news-2 days ago we went for a little ride in the country and as we got back to Hackettstown there was a small group of protesters on a corner so even out here things are happening. Hope things get better soon-we miss everything NYC has to offer-wonder if Macys will be able to do a firework display July 4-I guess not? Stay safe. Regards, Len 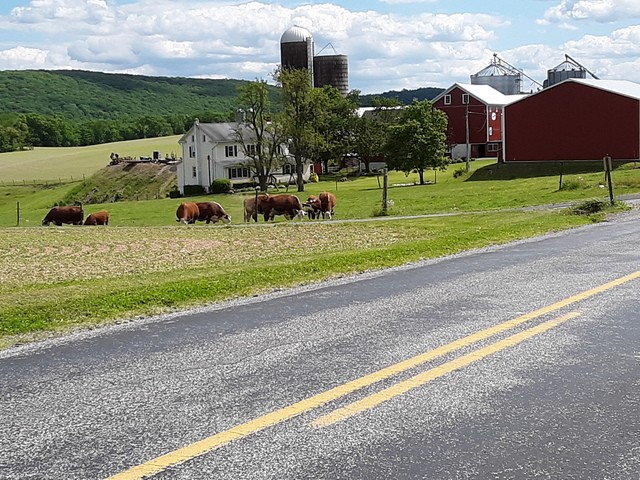 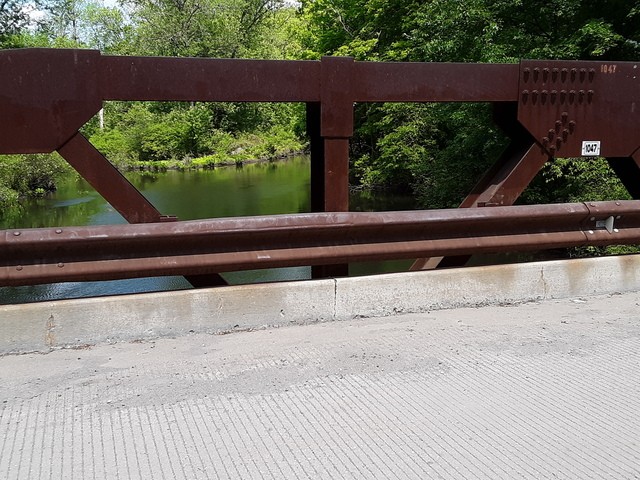 I don't get these protesters. What's their beef, anyways?
Top

Yes, and they're looting the grass.
Top

Users browsing this forum: No registered users and 46 guests