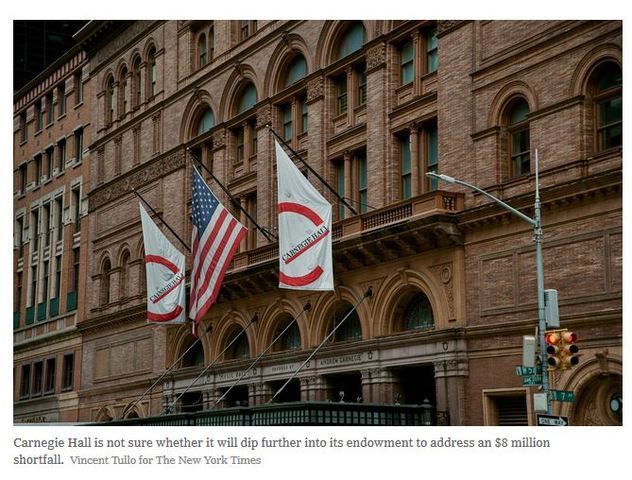 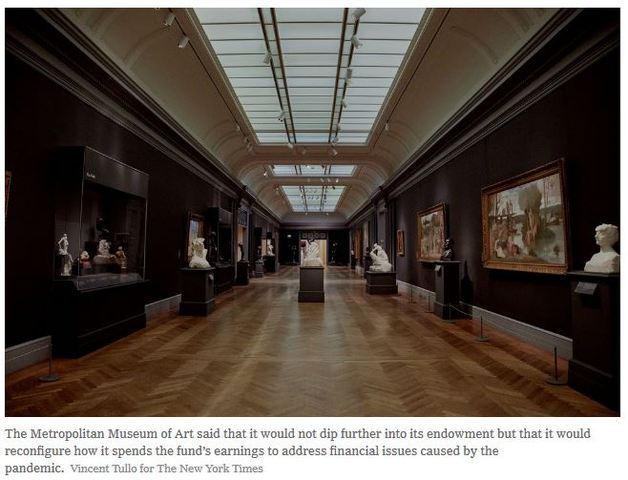 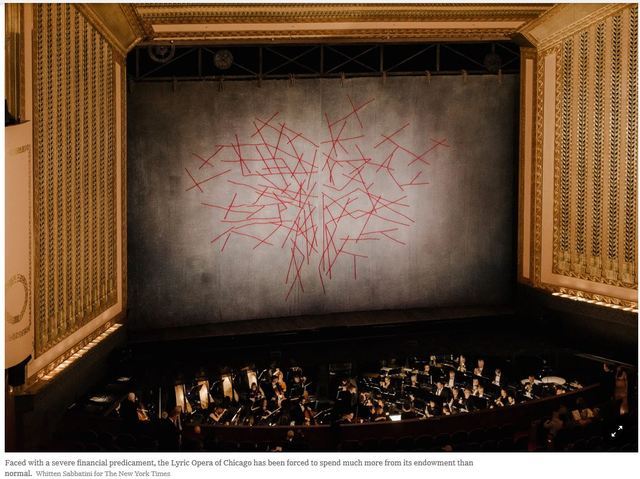 Some cultural organizations, staggered by the financial upheaval caused by the coronavirus pandemic, are dipping heavily into their endowments. Others are thinking about it.

By Graham Bowley and Julia Jacobs

Endowments have long been viewed as the bedrock upon which the long term financial health of arts organizations are built — money that was painstakingly accumulated and protected over decades to finance the future.

They are not rainy day funds, or pots of gold to be casually raided to cover some unforeseen expense. A manager who dipped into theirs excessively, taking out more than the widely embraced standard of 5 percent, could put themselves at risk of being cast as shortsighted, or worse, a spendthrift.

But the coronavirus pandemic has challenged that orthodoxy because so many largely dormant museums, orchestras and ballet troupes are facing unmatched financial problems.

So elite organizations like the Lyric Opera of Chicago and the Los Angeles Philharmonic — institutions with veteran leadership and a track record of solid financial management — now feel they have to blow past the stop signs.

The Lyric plans to spend $23 million from its $173 million endowment this year, almost triple what it typically takes. It canceled its season in March, furloughed staff and cut salaries, but is still facing a huge deficit.

“This is an unprecedented situation,” said Anthony Freud, the Lyric’s general director.

The Los Angeles Philharmonic is drawing down $37 million from its endowment, more than twice what it would normally take, to offset crippling losses of revenue from performances, including its season at the Hollywood Bowl.

The story is much the same for the New York City Ballet. It had planned to take roughly $11 million from its endowment, or the typical 5 percent. Faced with a looming deficit, it expects to take about $19 million instead.


The endowment issue is confronting universities, think tanks, hospitals, social service organizations, all kinds of nonprofits that have been damaged by the pandemic. The conversation has grown intense among arts organizations, especially smaller ones that are staring at particularly bleak futures. Their audiences have vanished in the short term and they can’t count on a high-profile donor coming to their rescue.

“When your entire business model is being compromised by a pandemic, we have to reconsider everything,” said George Suttles, the director of research at Commonfund Institute, whose parent company manages the assets of about 50 cultural institutions nationwide.

Still, many arts organizations, despite the economic stresses they face, say they simply will not touch their endowments.

So each year, the organizations take an amount, “the draw,” from the endowment to put toward operating expenses. Preferably, the draw never extends beyond 5 percent of the money held in the endowment. To take more is to risk outspending what a conservative investment portfolio can earn, and to end up eating into the corpus, or principal, of the endowment. The concern is that shrinking endowments result in shrunken investment earnings that are no longer large enough to provide meaningful operating revenue.


The preservation of principal as a practice is so widely embraced that many states oversee the extent to which nonprofits tap into their endowments in a given year.

“Endowments are not going to solve the problem,” said Peter Gelb, general manager of the Metropolitan Opera. The opera has furloughed staff, canceled its fall season and raised $60 million to plug its losses, but has decided it will not stray into its $270 million endowment beyond taking the regular 5 percent annual draw.

The Metropolitan Museum of Art in New York has also said it is not cutting into its $3.6 billion endowment beyond its regular annual draw. But it is, for the first time on a large scale, changing the formula for how it spends the roughly $150 million in endowment earnings and siphoning tens of millions of dollars that typically are used to acquire art and putting them toward more mundane operating expenses.

“The Museum has never been closed longer than three days, much less for three months or more — during which we have lost all revenue sources,” said Kenneth Weine, a spokesman, in a statement. “The financial impact of the pandemic is extraordinary, and we are accessing all possible means to work through this crisis.”

The Association of Art Museum Directors acknowledged the difficult situation in April when it relaxed its guidelines on endowment spending. While it is not recommending that museums dip further, the association’s board adopted a resolution that says it will not censure museums if they redirect income earned off invested endowment funds from restricted sources to general operations.

John MacIntosh, managing partner of SeaChange Capital Partners, an organization that supports nonprofits, said many organizations are, at the least, discussing the prospect of employing endowment money in a more active way, short term.

“I certainly think that it’s widespread and it should be,” he said.

In fact, part of the ongoing debate is whether endowment preservation is too fusty a principle at a time when some organizations are fighting for their very survival and the human costs of the pandemic are evident in massive layoffs and furloughs.

“This should not be happening. The board of this museum, the endowment, the assets in its warehouses that never see the light of day — all capable of making this shortfall and keeping those people employed,” was one reaction on Twitter, by Jonathan T.D. Neil, the director of Claremont Graduate University’s Center for Business & Management of the Arts, to the Metropolitan Museum of Art’s decision to lay off some museum staff.

But even those who are accessing endowment funds in ways they have never done before consider these funds to be critical bulwarks to their organizations and plan to only increase their spending temporarily.

“This is unprecedented, like so many things during this crisis,” said David Gordon, a former director of the Milwaukee Art Museum who consults with cultural institutions. “There has been for quite a while an emphasis on building up the endowments so there will be a great reluctance to dip into them.”

The board of trustees at Carnegie Hall is still deciding how to deal with its $8 million budget deficit caused by the pandemic, said Clive Gillinson, its executive and artistic director. Increasing the amount taken from the roughly $300 million endowment this year is on the table, Mr. Gillinson said, but he considers that to be a “radical approach.” “You have to be careful that what you’re doing helps sustain the long term as well as dealing with short-term issues,” he said.


So far, the arts groups more inclined to reach further into the endowment have been performing arts organizations, many of which rely on ticket revenues for a greater portion of their operating expenses than museums rely on admissions. Although the American Alliance of Museums estimates that the 35,000 museums in the United States are, all told, losing a staggering $33 million a day, Laura Lott, president and chief executive, said she had not yet seen any dip into endowment principal.

The cautionary tale is the experience of the New York City Opera, which eventually filed for bankruptcy in 2013. The opera closed during a period of building renovations at Lincoln Center, never made up for lost ticket revenue and ended up invading its endowment to the tune of $24 million to cover operating deficits around the time of the financial crisis. It emerged from bankruptcy in 2016 but has struggled to build momentum.

One hurdle, even for those who decide they need to take more this year, is dealing with the restrictions often set by donors who contribute to endowment funds. Some say the money must go toward a specific purpose. Some donate precisely on the condition that the principal of their gift will be protected in perpetuity.

To use these funds, arts organizations typically need the donor’s permission. If the donor is no longer alive, the museum usually has to get their state’s attorney general to sign off or perhaps seek a court ruling.

The Worcester Art Museum, in Worcester, Mass., has this year contacted the charitable trust that manages the assets of a major donor for permission to divert restricted funds to help pay for general operations. A quarter of its current endowment of roughly $90 million had been contributed by this deceased donor who said the money must be reserved for art acquisitions. By negotiating with the trust, the museum was able to free up $1 million in endowment income to pay for costs like staff salaries.


For the Lyric Opera, the decision to dip further into the endowment is only the latest disappointment brought on by the pandemic. In March, it was weeks away from performing three full Wagner “Ring” cycles, a monumental challenge that the opera company started preparing for a decade ago, when the cast and crew were called onto the stage to be told it was canceled.

“It was heartbreaking,” Mr. Freud said. “There were a lot of tears.”

It was also too big to receive federal help under the stimulus package. Some groups like the New York Philharmonic and the Seattle Symphony did receive aid under the administration’s Paycheck Protection Program for small businesses, but the Lyric did not qualify because it exceeded the 500 employee cutoff.

Along with several other cultural institutions that missed out on the government’s aid program, the Lyric is now advocating for money in any forthcoming stimulus program — knowing that it can’t rely solely on its endowment for survival.

“In these exceptional circumstances you’re grateful for the fact that there is an endowment,” said Mr. Freud. “What we’re realizing is that we can’t simply carry on as normal in the expectation that the endowment will provide us with a medium-term solution, let alone a long-term solution.”