I enjoyed this article-there are 40 audio clips-a few are shown below. It also made me realize I had never heard the Saint-Saen's cello concerto so I'm listening to it as I type c/o youtube! Regards, Len 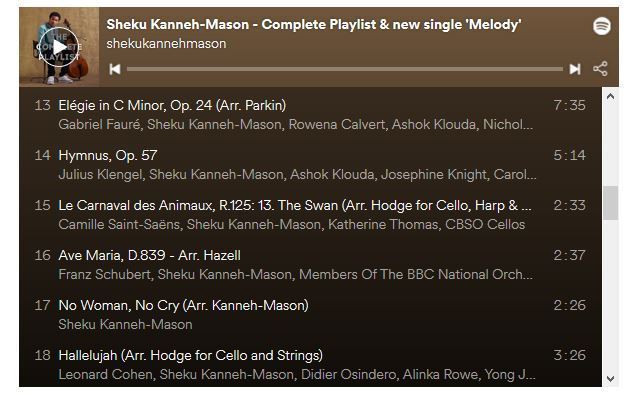 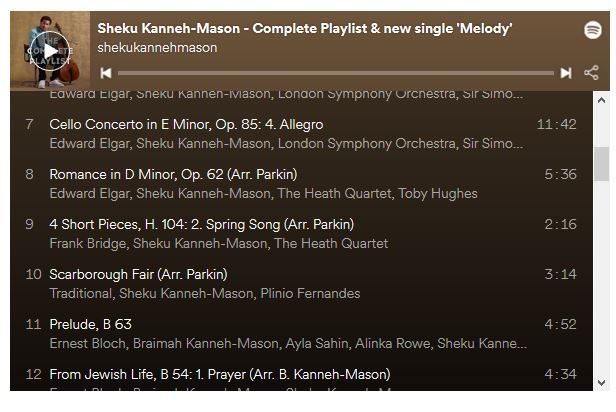 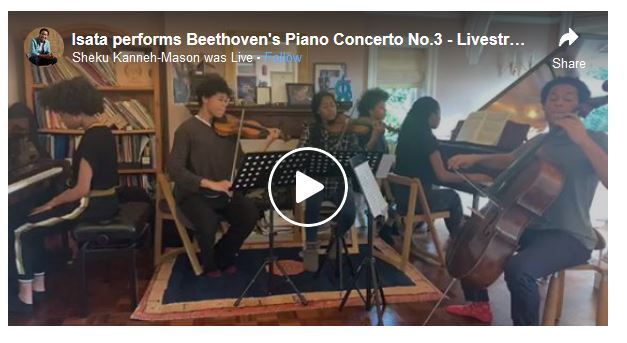 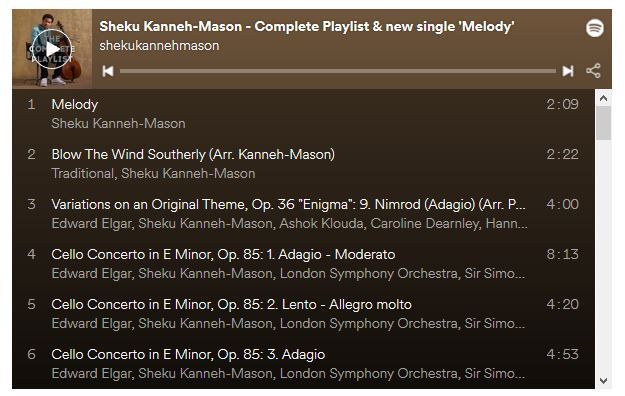 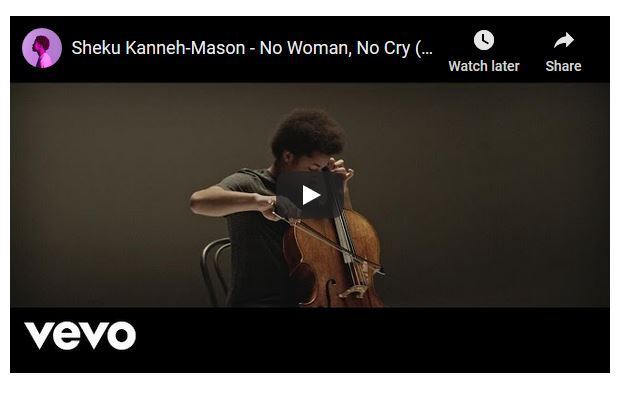 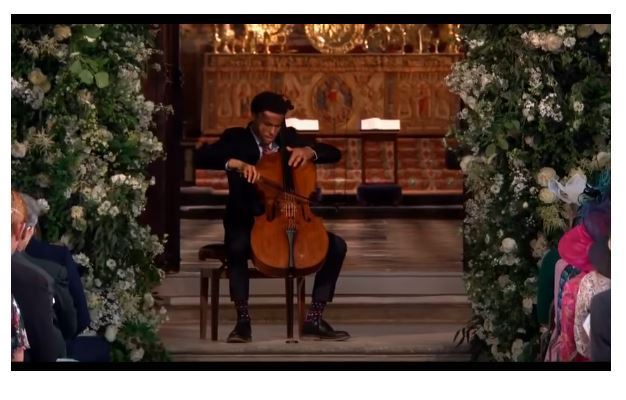 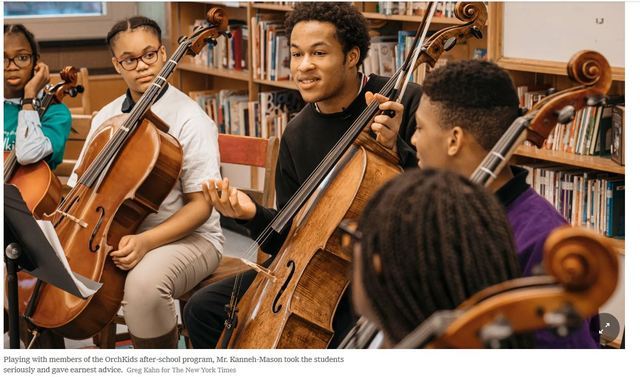 The young British cellist Sheku Kanneh-Mason is bursting to the forefront of a field that lacks headliners of color.

BALTIMORE — On a Friday evening a few months ago, when it was entirely normal to be in a packed concert hall, Sheku Kanneh-Mason finished playing Saint-Saëns’s Cello Concerto No. 1 with the Baltimore Symphony Orchestra.

The British cellist had torn through the classic piece, which unfolds in a 20-minute whoosh.

“It just kind of starts,” he had said at lunch that afternoon. There are no gaps between the concerto’s sections, so no breaks for awkward throat clearing. No big solo cadenza stops the momentum. Mr. Kanneh-Mason’s playing is more poised than fiery: levelheaded, though not exactly cool. But the enameled sunniness of his tone — milky yet bright — took on dashing spirit in the headlong sprint to the end.

Mr. Kanneh-Mason, who turned 21 on April 4, walked offstage to a loud ovation, then stood with his cello for a few seconds before heading back on for an encore. When he emerged, the audience greeted him with a roar. Marin Alsop, the Baltimore Symphony’s longtime conductor, smiled as she watched from backstage.


But if Mr. Kanneh-Mason continues to rise through first-name recognizability — it’s “SHAY-koo” — ticket-selling power and millions of Spotify streams, he will be more than just another star who can anchor galas and assure capacity crowds. He will be what the classical music world has long lacked: a black headliner. Orchestras have a stunningly low number of black and Latino members, and the numbers are even grimmer when it comes to concerto and recital soloists.

“The arena is still devoid of stars of color,” said Afa S. Dworkin, the president of the Sphinx Organization, a nonprofit devoted to diversifying classical music.

If Mr. Kanneh-Mason becomes a figure as well-known as Yo-Yo Ma, Lang Lang or Joshua Bell, his celebrity will have had its roots in a fairly standard, if impressive, achievement: He won a prestigious competition, the BBC Young Musician of the Year, in 2016.

But that victory set the stage for a once-in-a-lifetime launch. After appearing at a charity event attended by Prince Harry, he was selected to play at Harry’s 2018 wedding to Meghan Markle. It was watched on television by an audience of nearly 2 billion — including many young people of color who have swiftly taken Mr. Kanneh-Mason as a model.

“It’s difficult to see yourself doing something if you don’t see someone looking like you doing it,” he said.

This is what Ms. Dworkin calls “the Sheku effect.” “A new generation of musicians are saying, ‘That will be me,’” she said. “And parents are looking at that and saying, ‘I wanted to start my kid on cello. How do I get to this?’ It becomes positive and realistic.”


After one of his rehearsals with the Baltimore Symphony, Mr. Kanneh-Mason rode to an elementary school on the east side of the city to meet students in the ensemble’s OrchKids program, which provides after-school music programs in poor communities.

He warmed up with Bach’s D-minor Suite in an empty classroom as the sun lowered over the neighborhood of rowhouses. A large group of children, almost all of them black or Latino, filed in and peppered him with questions after he played some short, lyrical pieces, including a version of “No Woman, No Cry” that he arranged in the solemnly dancing style of a Bach sarabande. (His recording of it has been streamed almost 12 million times on Spotify.)

Then, joined in a ring by a dozen or so beginner cellists, Mr. Kanneh-Mason sometimes seemed almost overcome with bashfulness as he led a genial little master class. He took the students seriously as they sawed through “Frère Jacques,” and gave earnest, soft-spoken advice as he played along. He was so humble and quiet that he sometimes seemed, improbably, to be just another kid in the class.

Being part of a circle of musicians — rather than the singular attraction — wasn’t out of character for Mr. Kanneh-Mason. He was raised in Nottingham, in the middle of England, with six siblings, all of whom have also turned out to be serious players. His mother, who was born in Sierra Leone, and his father, whose parents are from Antigua, both grew up in Britain and met in college. Neither was a musician, or set out to create a family of virtuosos.

“It’s a thing they liked,” Mr. Kanneh-Mason said of his parents, who would play Itzhak Perlman, Jacqueline du Pré and Vladimir Ashkenazy CDs in the car. “It wasn’t a big plan.”

Quarantined together in Nottingham, the siblings have broadcast twice-weekly concerts over Facebook Live throughout the coronavirus lockdown. In April, on the day his older sister, Isata, was supposed to have appeared with the Royal Philharmonic Orchestra as the soloist in Beethoven’s Third Piano Concerto, the family performed an arrangement of the piece that has been viewed more than a million times.

“Recitals — with just piano, or chamber music — is what I enjoy the most,” Mr. Kanneh-Mason said. “Because of the repertoire, and I like being able to work closely with just a few people on something. I prefer the intimacy of that to a concerto.”

His taste in performing, valuing the small-scale and personal over grandeur, has fit in well with the restrictions of the moment and what is likely to come in the near future. He loves spaces like Wigmore Hall in London and, in New York, the 268-seat Weill Recital Hall, where he made his Carnegie Hall recital debut in December with Isata.

Still an undergraduate at the Royal Academy of Music in London, he’s been continuing lessons with his teacher over video chat this spring, and working on the improvisations and arrangements he likes to toy with. On a Zoom call in May from his bedroom on the top floor of the house where he grew up, he talked about breaking apart the different voices of a Bach aria and playing them all. A few days later, he posted the results on Instagram, the tiny screen broken into five of himself, and the harmonies of “Komm, süsser Tod” almost painfully rich.

His coming months are uncertain, as they are for all musicians. The plan had been for him to do some low-key performances of Dvorak’s Cello Concerto, the next addition to his orchestral repertoire, in the fall, to get some practice before higher-profile dates next year. Now it’s unclear when he’ll be able to play it anywhere.

He and Isata will return to the United States in a couple of years for another recital tour. “And the presenters are very confident that they will be able to sell big halls, because of the appeal he has and the audience that came to the last cycle,” said Kathryn Enticott, who manages both of them. “And the initial reason for that was the wedding. But then the audiences want to come back.”

While his biggest successes online have been in a decidedly light mode — “No Woman, No Cry,” which he sometimes pulls out for encores, and arrangements of songs like “Hallelujah” and “Scarborough Fair” — his performing career has stuck almost entirely to the standard repertoire.

“He’s been asked to do some crossover projects, and he doesn’t want to go near them,” Ms. Enticott said. “He believes that the music he plays, if people are exposed to it, they will appreciate just how great it is.”

Mr. Kanneh-Mason is of course not the only gifted young classical instrumentalist of color. The Sphinx Organization alone has hundreds of alumni that Ms. Dworkin, who admires him, says are his equal in ability and deserve their chances, too.

“At the beginning of my career, a quarter-century ago,” Ms. Dworkin said, “there was actual resistance, a vocal one: ‘We don’t think they’re ready; the talent isn’t out there.’ Now I think the issue is these quiet choices not being made.”

Artist managers, recital presenters, orchestra administrators, record labels, journalists: All have the opportunity, and the responsibility, to take the risks that will broaden music.

“We are very much a field of followers,” Ms. Dworkin said. “If a couple of presenters do it, others will follow. Like they did with Sheku.”


During the day of Mr. Kanneh-Mason’s final performance in Baltimore, he practiced and went for a run around the Inner Harbor. His performance of the Saint-Saëns concerto that evening, his face clenched and wincing, was the most intense yet; he took a dramatically deliberate tempo for the slow tease just before the final romp.

“He’s a phenom, I think,” Ms. Alsop had said at dinner before the concert. “Right time, right personality, right everything.”

The long CD-signing line at intermission wound its way through the lobby of Meyerhoff Symphony Hall. People were still waiting to meet Mr. Kanneh-Mason as the lights flashed for the audience to take its seats for the second half; still waiting as the auditorium dimmed; and still waiting as Ms. Alsop came out and the orchestra began Dvorak’s Seventh Symphony.

“That doesn’t happen,” said Tonya McBride Robles, the orchestra’s vice president and general manager, as she stood near those choosing to meet the young cellist rather than watch the rest of the concert they’d paid for.

For a classical music event, she added, it was a notably diverse group, in age and race. “It looks,” Ms. Robles said, “like our town.”

Re: The Sheku Effect: A Classical Music Star Rises

We shall see regarding Ms. Dworkin's comments. Despite Mr. Kanneh-Mason's obvious talent, I am far from sure that orchestral administrators, record labels, and radio broadcast programmers will take the risks required to broaden music. In Los Angeles, KUSC, which put out one of those mealy-mouthed statements that says that they "stand beside those who are calling for a more just, compassionate society, free of racism" has zero broadcasters of color (even Asians, who, unlike African-Americans or other individuals of African descent, are not exactly underrepresented as star soloists) and has made absolutely no effort to broaden its programming. When Anthony Davis, a major African-American composer, won the Pulitzer Prize for music a few weeks ago, the station not only failed to play any of his recorded works (even in an excerpt), it failed to mention the award at all. We definitely have a long way to go.
Top
Post Reply
2 posts • Page 1 of 1