The below obituary is courtesy of Presto Classical written by Katherine Cooper. I have long been an admirer of the gorgeous redhead with the stunning voice. I will cherish her many recordings more than ever.

The French soprano Mady Mesplé, who possessed one of the greatest coloratura voices of the twentieth century, has died aged 89.

Magdeleine Mesplé was born in Toulouse on 7th March 1931 and studied piano and singing in her home city before moving to Paris to work with Janine Micheau, herself a great exponent of much of the repertoire in which Mesplé would come to excel. In 1953 she made her professional debut in Liège as Delibes’s Lakmé, which became her signature-role: she performed it almost 150 times in the course of her career and recorded it for Alain Lombard in 1971, with Gramophone holding up her ‘twinkling pin-point precision’ in the famous Bell Song as a gold standard twenty-five years later. Mesplé’s compact, supremely agile voice – which extended easily beyond the high Fs required for Mozart’s Queen of the Night – also made her an ideal interpreter of roles including Meyerbeer’s Dinorah, Ambroise Thomas’s Ophélie (Hamlet) and Philine (Mignon), the mechanical doll Olympia in Offenbach’s Les contes d’Hoffmann, Massenet’s Manon, and Le Feu/La Princesse in Ravel’s L’enfant et les sortilèges.

Though French repertoire dominated Mesplé’s career, she also enjoyed considerable success in Italian bel canto roles, including Donizetti’s Lucia di Lammermoor (replacing Joan Sutherland to great acclaim at the Palais Garnier in 1960) and Norina (Don Pasquale), Amina in Bellini’s La sonnambula, and Rossini’s Ninetta (La gazza ladra) and Rosina; she was also a wonderful, sparky Jemmy (one of her few trouser-roles) in the latter's Guillaume Tell, which she recorded opposite the late Gabriel Bacquier for EMI in 1972. It was around this time that she also made numerous benchmark recordings of operetta for the same label, including Offenbach’s La Vie Parisienne, La Grande-Duchesse de Gérolstein and Orphée aux Enfers, and rarities such as Charles Lecocq’s La fille de Madame Angot, Robert Planquette’s Les cloches de Corneville, and Louis Varney’s Les Mousquetaires au couvent.

From the 1960s onwards she worked regularly with contemporary composers, singing in early performances of major works by Hans Werner Henze, Giancarlo Menotti, Betsy Jolas, and Charles Chaynes (whose Quatre Poems de Sappho for soprano and string trio were composed for her in 1968). Her discography also includes numerous beguiling recordings of French song, particularly Satie and Poulenc, and Schoenberg’s Die Jakobsleiter with Pierre Boulez, Ensemble InterContemporain and the BBC Symphony Orchestra.

The French soprano Mady Mesplé, who possessed one of the greatest coloratura voices of the twentieth century, has died aged 89.

Wow, Lance, what a great loss! I grew up admiring her Bell Song. I notice that her Lakme seems to be still in print, available for listening on American amazon if you're a Prime member. What a great singer: I didn't know she was still with us. I didn't know about her work with modern composers, though. Thanks for posting this, Lance! 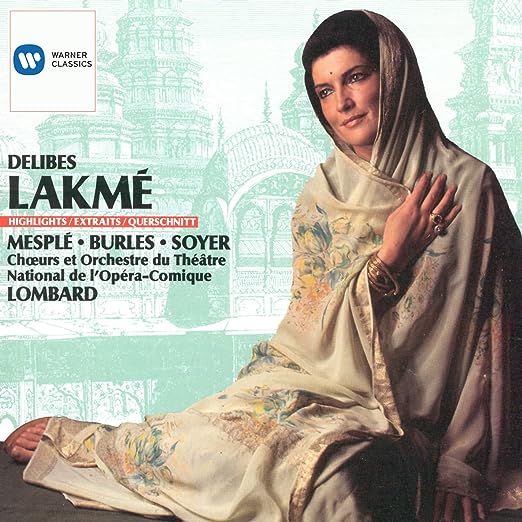 I didn't have the time to check the newsletter from Presto Classical yesterday and I'm glad I didn't as this news would have saddened the day. She was probably best known as Lakmé, but she sang a wide range of music from the Classical period into the 20th Century. She recorded many obscure French operas from the 18th and 19th centuries, French operetta and arias of Johann Strauss II, Oscar Straus and Franz Lehar in French (German operetta works very well in French).

I bought a CD copy of her album of music of Johann Strauss II accompanied by Frank Pourcel and his Orchestra. The seller apologized for the writing in the booklet, which was Ms. Mesplé's autograph.

Her recording of the Bell Song is my favorite. Another (in the link below) is Ophélie's Mad Scene in Thomas' Hamlet, a recording both beautiful and thrilling.

An 80th birthday tribute may still be available and provides a well-rounded picture of her artistry.

Thanks for posting that, John; I will watch with interest.
But last night I spent some time watching her on YouTube, and she was very fine. I'm surprised that I was never aware of her.
Top

barney wrote: ↑
Sat Jun 06, 2020 5:01 pm
Thanks for posting that, John; I will watch with interest.
But last night I spent some time watching her on YouTube, and she was very fine. I'm surprised that I was never aware of her.

I don't believe most of her recordings had much circulation outside of France. This would particularly true for the late recordings of obscure, lighter French operas and operettas. Ward Botsford, the founder of CMG issued a few of them on LP on his Arabesque label. Fortunately, as they were re-issued on CD most were imported into the U.S.

French singers, French artists in general and the maverick French branch of EMI are a very interesting offshoot of collecting. Once I got used to the voices through operetta I was hooked.