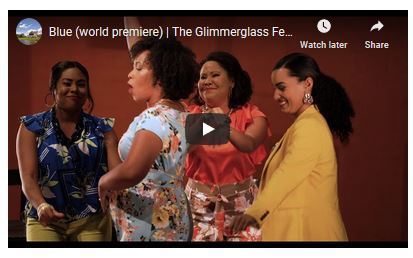 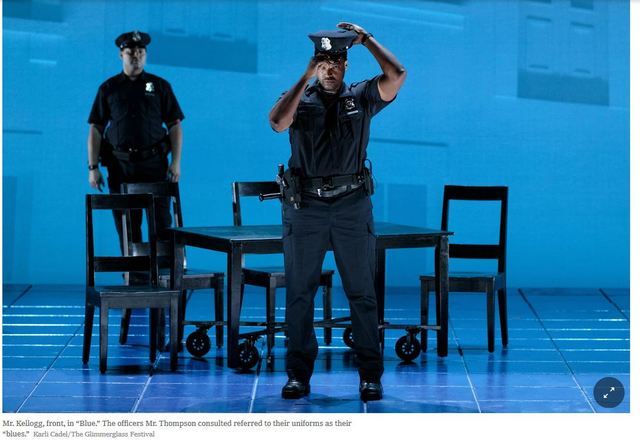 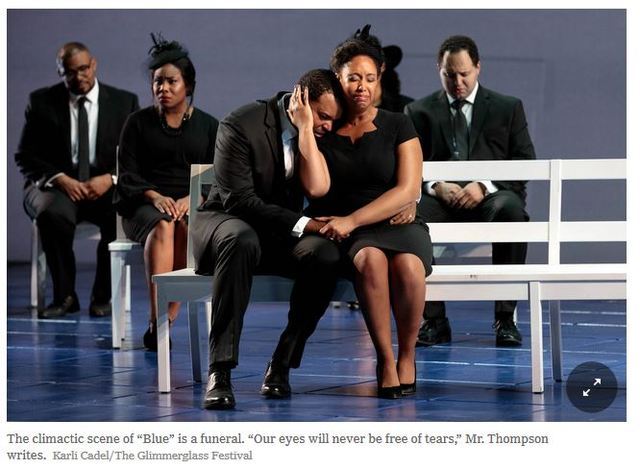 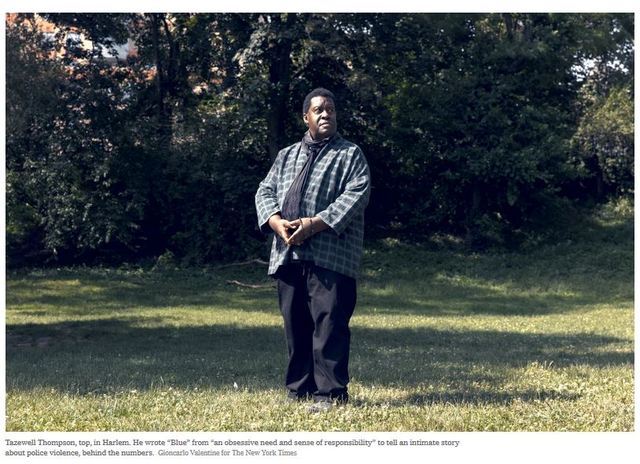 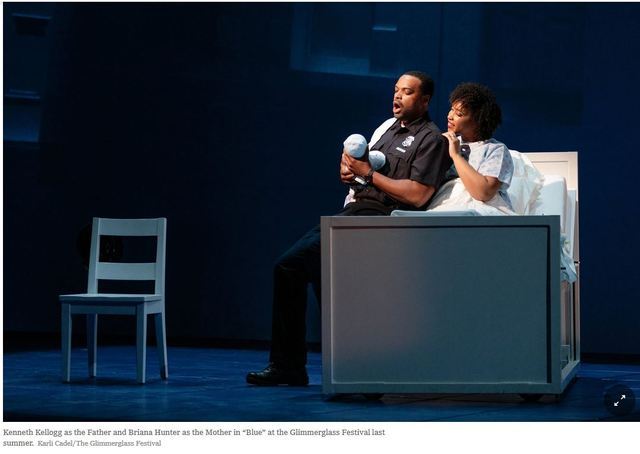 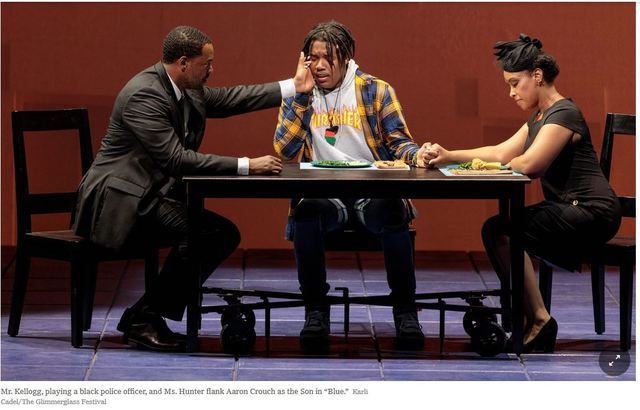 Tazewell Thompson’s libretto for “Blue” tells the story of a black family struck by tragedy.

When the opera “Blue” had its premiere last summer at the Glimmerglass Festival in Cooperstown, N.Y., Anthony Tommasini wrote in The New York Times that it featured “one of the most elegant librettos I’ve heard in a long time.”

Its author was the playwright and director Tazewell Thompson, who wrote the story about a black family — the father a police officer — that is torn apart when the son is killed at a protest by another officer.

In March, before several stagings of the work were canceled because of the coronavirus pandemic, the Music Critics Association of North America decided to award “Blue” its prize for best new opera. Announced on Wednesday, the honor is sadly timely as the nation is roiled by unrest over police brutality and race relations.

In the fall of 2015, I received an email from Francesca Zambello, the director of the Glimmerglass Festival. “I’m interested in commissioning an opera about race in America, about where we are now as a people dealing with race,” she wrote. “I have a composer set, and I’m looking for a librettist. What are your thoughts on the following writers?”

They were all names known to me, some quite famous. Some had written operas before.

“What about me?” I replied.

I have been writing something down each night, a diary of sorts, since I could hold a crayon and scribble. My parents’ criminal behavior kept them in and out of prison throughout my childhood and most of my teenage years. They were deemed irresponsible, unsafe and unsuitable — not fit to raise me. So I was taken from them at an early age and made a ward of the state. I spent seven years at the Convent of St. Dominic in Blauvelt, N.Y., where I was introduced to storytelling by Sister Martin DePorres, who read to us 30 boys at bedtime, everything from “The Hardy Boys” to Dickens.

Sister Charles Williams encouraged me to take the next step and write for the school paper. At 9, I was editor, getting high on my power and the aroma of mimeograph fluid. But poetry was my real calling. I devoured Frost, Hughes, Millay, Dickinson, Whitman and Shakespeare. I walked around reciting aloud; I entered oratory contests. I was in love with the sound of my own voice, and the discovery that words were not democratic: Some were special and needed to be framed, stressed or served up more or less than others.

“What about me?” I asked Francesca. She told me to send her a bit of material, something that would indicate that I understood the libretto form.

That summer at Glimmerglass, Eric Owens had been singing in Verdi’s “Macbeth,” and I was directing the American premiere of Vivaldi’s “Cato in Utica.” Eric and I, two black men, were outraged by the prominent cases of unarmed black boys and men being shot by white police officers. We, of course, had our own stories of racial profiling that we shared as we tried and failed to understand what was happening to our black brothers, and why.


So I sent Francesca two scenes set in Harlem, where I was born and now live: A young married black couple expecting their first child, a boy, and fearing the challenges and obstacles he will face; and a scene of the mother-to-be and her girlfriends.

Francesca told me to send the samples to Jeanine Tesori, who would be the opera’s composer. Jeanine and I met over avocado toast on Upper Broadway. It was a match.

As I wrote, I looked to my favorite essayist and novelist, James Baldwin, and his “The Fire Next Time”; Ta-Nehisi Coates’s “Between the World and Me”; and, from my teenage years, Claude Brown’s “Manchild in the Promised Land.” I consulted with friends, black and white: How do you prepare a son for what awaits him? Do you have “the talk” with him, about how to survive and thrive from day to day? All the black parents said yes. The white ones said it had never even entered their thoughts.

Six months later I had a first draft, in which a black family and their community are convulsed when an unarmed teenager is killed by a police officer. The principal characters were the father, a jazz saxophone player; the mother, a restaurant owner; and the son, a student activist interested in art and poetry. A chorus of 30 young black men represented other murdered boys, attempting through music and dance to make sense of the world they had left.


As Jeanine and I met and she began to hear musical themes in my text, and with Francesca’s tough notes, things evolved. I learned how to edit rambling sentences down to select bites that would allow the music to enter; how counterpoint is used, and the dramatic musical effect of repeating lines and using active verbs; how to write duets, trios, arias.

At one meeting, Francesca and Jeanine suggested I get rid of the boys’ chorus, and rethink the idea of the father as a struggling jazz musician. “What if he’s a cop?” Jeanine said.

Absolutely not, I answered. I did not want to write about a police officer.

But despite myself, I soon recognized the irony, the tension, the glittering possibilities of personal conflict and heartache for a father whose son is murdered by a fellow officer. I set about interviewing black police officers.

Francesca introduced me to one in Washington who was leaving the force to become an actor. I also consulted with a Harlem police officer whose relationship with his teenage son was a disaster, the son appalled that his dad worked for “the man” — the enemy. That conflict is in the opera. For this officer, life insurance and dental coverage for his family were a major part of his decision to join the force. That’s in the opera, too.


It is hard to think about “Blue,” or much of anything, in the midst of the continuing pandemic that has taken so much of my community in Harlem. Massive unemployment; lines snaking around several blocks for the food pantry on 116th Street. Small family businesses that have closed forever. The recent brutal killings of Ahmaud Arbery, Breonna Taylor, Tony McDade, Sean Reed, Rayshard Brooks and George Floyd: My people and I are left shocked and shivering, fending for ourselves. Moving targets. Who’s next? How are we to catch our breath again? How are we to put our trust in the laws of the land?

It is difficult for me not to feel utterly defeated. Not difficult at all for me to see my face superimposed over George Floyd’s. I’m angry and frightened, living in an increasingly terrifying, divisive country — where a white police officer, in broad daylight, in uniform, snuffs out the life of an unarmed, handcuffed black man.

When I joined the Glimmerglass project in 2015, the opera was referred to in shorthand as “Race Opera.” I began to attach new titles to each draft: “No Name Necessary,” “Say My Name,” “The Hunted,” “Targets,” “Black Boy.”

Both police officers I spoke to referred to their uniform as “blues”: “When I’m in my blues.” As the opera begins, the audience sees the central character, the father, changing from his civilian clothes into his police blues. I kept cycling through titles: “Black Blue,” “Black In Blue,” “Black Is Blue.” But it seemed better to be more ambiguous, to refer equally to a mood, a uniform, a kind of day, a kind of music. I wrote to Jeanine and we decided we should call it “Blue.”


When the final curtain fell on opening night, there was a long silence, followed by gasps, audible weeping, and then, finally, applause. “Blue” has been referred to as a “protest opera” and “the opera about police violence.” I suppose both are true. But I did not set out with that goal. I wrote it from an obsessive need and sense of responsibility to tell an intimate story behind the numbing numbers of boys and men who are killed.

But here we are now: art imitating life, life imitating art. Unfortunately, the themes in “Blue” have no expiration date. I add my voice to those of the characters singing in the opera, and to those of the real families suffering great losses. Our eyes will never be free of tears.

Users browsing this forum: No registered users and 61 guests