Opera Has Vanished. So Have Their Dream Jobs at the Met

Opera Has Vanished. So Have Their Dream Jobs at the Met 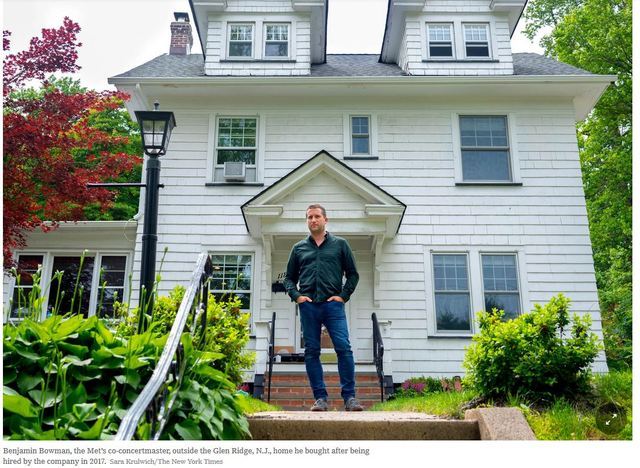 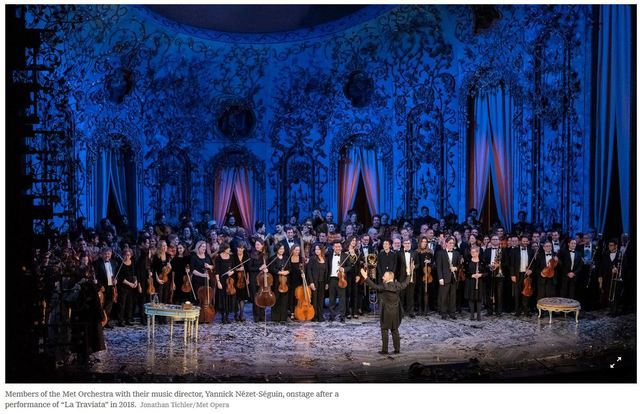 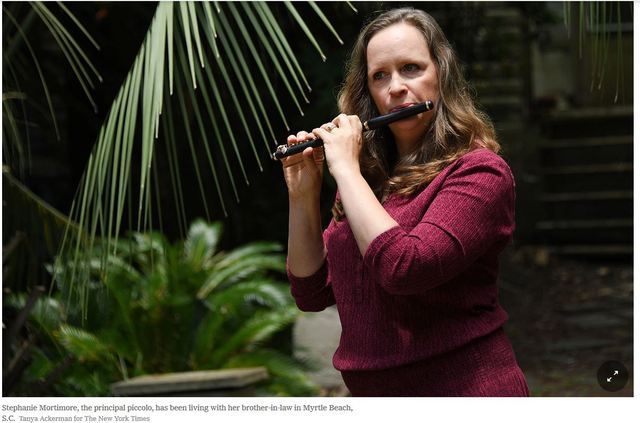 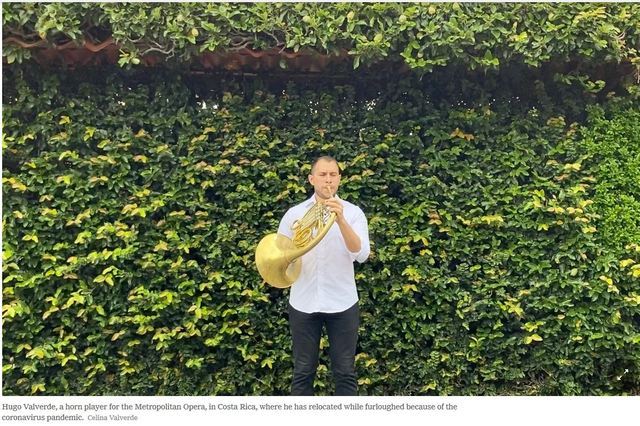 Opera Has Vanished. So Have Their Dream Jobs at the Met.

The company’s orchestra offered prestige and job security. But the pandemic has upended hundreds of lives.

Hugo Valverde didn’t think he’d make it when he auditioned for the orchestra of the Metropolitan Opera, the nation’s largest performing arts organization and its most prestigious opera company.

He was ambitious: a French horn player from a town of 2,000 in Costa Rica who had earned a scholarship that brought him to the United States. But he was only 22.

The audition was a major opportunity, though, so he gave it a try. And, to his surprise, he was hired.

“I wasn’t expecting it to happen so soon,” Mr. Valverde, now 25, recalled in an interview. Straight out of grad school, he found himself in the pit for Mozart’s “Magic Flute.”

Being a full-time member of the Met Orchestra is grueling: Operas stretch late into the evening, and players are often due back in the morning for rehearsals. During their time off, they practice; some also teach. But it’s a dream job, with a wide range of salaries that average $190,891 and the sigh of relief that comes with tenure.

In March, however, as the coronavirus pandemic forced the closure of performing arts institutions worldwide, the joy and security of the Met vanished. The company initially announced cancellations through that month; then, the remainder of the spring season. Now it won’t return until New Year’s Eve, at the earliest. The virus has killed two artists, the violist Vincent J. Lionti and the assistant conductor Joel Revzen.


And the orchestra — along with the chorus, stagehands and some administrative staff, about 1,000 in all — has been furloughed, with no pay since the end of March.

The Met has continued to provide health benefits. But without their typical income, the musicians have been unable to sustain the lives once made possible by their salaries. If performances indeed resume on Dec. 31, that will still keep them unemployed until rehearsals begin in early December.

“You think to yourself: I’ve made it,” said Benjamin Bowman, 40, the Met’s co-concertmaster since 2017. “But what once seemed like the most secure job is anything but.”

For Mr. Valverde, working for the Met meant he could afford to live alone within walking distance of Lincoln Center, while also sending money each month to his family in Costa Rica. When performances ended, on March 12, he knew it would be impossible to live off his savings indefinitely and continue helping his parents. So he negotiated an early lease termination and moved his belongings to a storage unit. He bought a plane ticket, and after two failed attempts as flights everywhere were being canceled, he left New York for Costa Rica on March 22.

Most of his colleagues are on unemployment, which through July includes a $600-per-week bonus as part of the congressional pandemic relief package. Some of the musicians are considering retirement; players say they are expecting at least 15 percent of the orchestra’s seats will be vacant by the end of the year.

Billy Hunter, 45, the Met’s principal trumpet, is married to a pianist with four children; his 16 years with the company have allowed his family to live comfortably, in a neighborhood with good schools. “This pandemic,” he said, “has taught me: You always have to make a Plan B and C and D.”

Mr. Epifanio, the bassoonist, is also married to a musician: a freelance oboist, John Upton, who had been set to tour with the New York Philharmonic this spring before those performances, too, were canceled. In March, they packed their instruments and cat in a rental car and drove all night to the vacant condo of Mr. Epifanio’s parents in Naples, Fla.


The lower cost of living there has made weathering the furlough more bearable. With the lease on their Upper West Side apartment set to expire, they are planning to move to Wisconsin and live with Mr. Epifanio’s parents — without whose support, he said, his situation would be unimaginably more difficult. He didn’t know when he and his husband would return to the city.

“We can’t come back unless we have employment,” Mr. Epifanio said.


John Romero, a 28-year-old who was recently awarded tenure as principal trombone, is also considering a move. He and his wife, who is training to be an opera singer, are both from Texas and might return there to be closer to friends and family.

“I love living in New York, and I love the apartment we’re in,” he said. “But it is definitely something to consider if the finances don’t work. We essentially need to decide by the beginning of August.”

Other deadlines are looming. Stephanie Mortimore, 48, the Met’s principal piccolo and a member of the orchestra since 2000, suspended her home and life insurance policies in March. She also deferred the mortgage on her apartment until July 1, but is still expected to make a lump-sum payment next month.

She has been able to cut costs by moving, with her husband, a freelance bassoonist, and her son to her brother-in-law’s house in South Carolina. She started volunteering for her parents’ business, a company that creates platforms for project- and distance-based learning, thinking it would be practical.


“I haven’t trained for any other career,” she said. “I thought I had a job at the most stable orchestra in the world.”

Getting hired by the Met was transformative for Mr. Bowman, the co-concertmaster. A few years ago, he and his wife, the classical music publicist Elizabeth Bowman, were living in a small apartment in Washington Heights with their daughter. A second child was on the way, and they were looking to buy a house.

“The Met came along like a steamroller to all the second-guessing, and all the concern and worry,” Mr. Bowman said.

They found a home in Glen Ridge, N.J., and he was able to invest in an expensive bow. But as he and his wife have been forced to drastically rethink their budget, it has become increasingly difficult to justify paying for it. “When does this become untenable for me?” he said. “I have no idea. So I can’t plan accordingly.”


The Met isn’t in any better or more certain of a position. Its general manager, Peter Gelb, described the pandemic as the worst crisis in the company’s history, with an anticipated $100 million in lost revenue by the end of the year. The Met has both an immense annual budget, of more than $300 million, and payroll, which has made it ineligible for the Paycheck Protection Program that has helped smaller institutions — like many orchestras — maintain at least partial salaries for their artists.

Mr. Gelb said that the Met is lobbying Congress to expand the program so the company could qualify. If that doesn’t happen, he added, “the results will continue to be devastating.”

For its part, the orchestra is taking steps to operate more independently of the Met until live performances return. The group registered as a 501(c)(3) organization in 2015, and is taking advantage of that to run as a nonprofit in earnest, with a redesigned website, fund-raising for musicians, education initiatives and partnerships — including one with the Renaissance School for the Arts in East Harlem that begins on Tuesday.

Demian Austin, a principal trombone and one of the musicians leading the orchestra’s nonprofit work, said that while programming is still in its early stages, it’s possible that live performances could take place outdoors. “Everyone wants to see how we can get back into the world,” he said.

Not all the players, of course, will be in New York and available for those concerts if they happen. Mr. Valverde, who spent 14 days self-isolating in Costa Rica before testing negative for the coronavirus and properly reuniting with his family, is not coming back until the Met does, too. It has been a period of mixed emotions for him; he is spending much-appreciated time with his parents and two sisters, and learning new music. But he is worried for the future, and for his colleagues.

Yes, it's a tough time for everyone involved in the arts world. I do miss the regular broadcasts, hearing about new singers, discussing performances, etc. Thankfully we have our collection of recordings. I fear that the MET will not be the same for many years, as musicians need to perform on a regular basis in order to keep their skills sharp. How many lives have been upended because of this cursed virus!
Top

Brian so true-Sue and I sit at the dinner table wondering when we'll be back in NYC-the concerns about hotel stays, restaurants, public transportation-there's talk some NYC museums may try to open up in some way by August? Regards, Len

lennygoran wrote: ↑
Sun Jun 21, 2020 7:28 am
Brian so true-Sue and I sit at the dinner table wondering when we'll be back in NYC-the concerns about hotel stays, restaurants, public transportation-there's talk some NYC museums may try to open up in some way by August? Regards, Len

Be careful all. " Virus fatigue " may be more dangerous than the virus itself,especially with so many ignoring safe practices.
Top
Post Reply
4 posts • Page 1 of 1