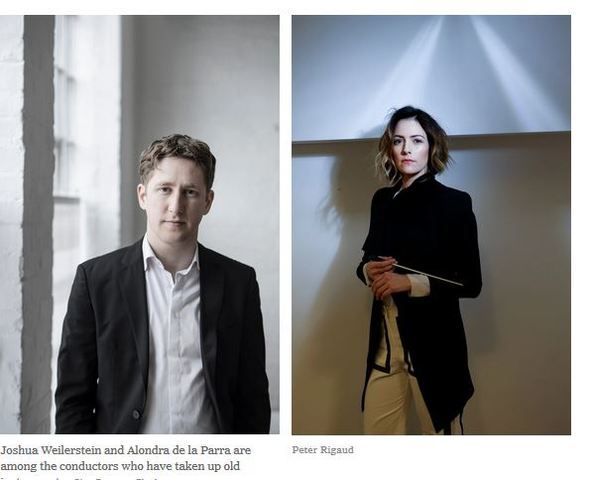 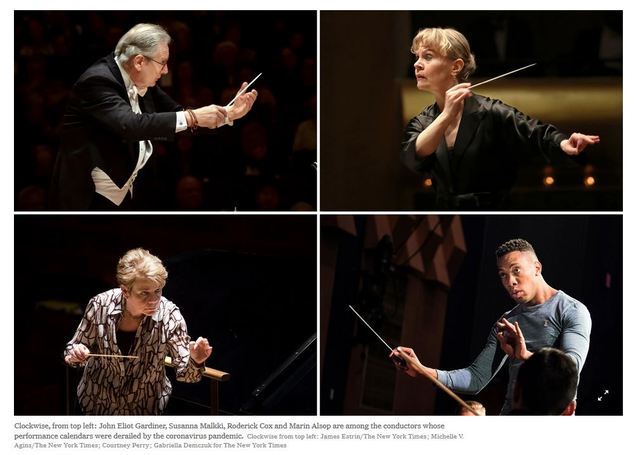 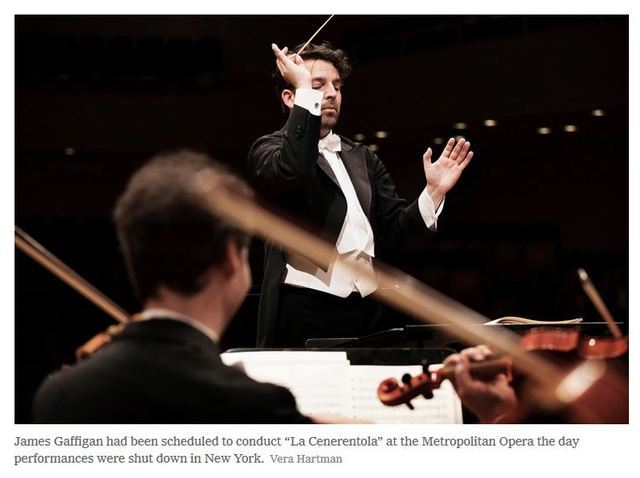 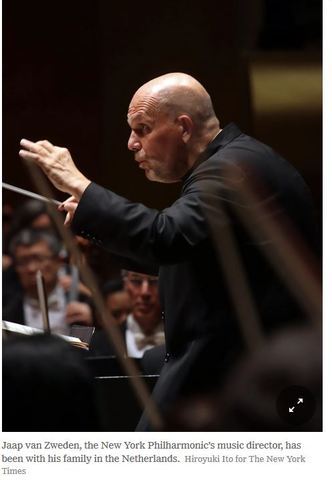 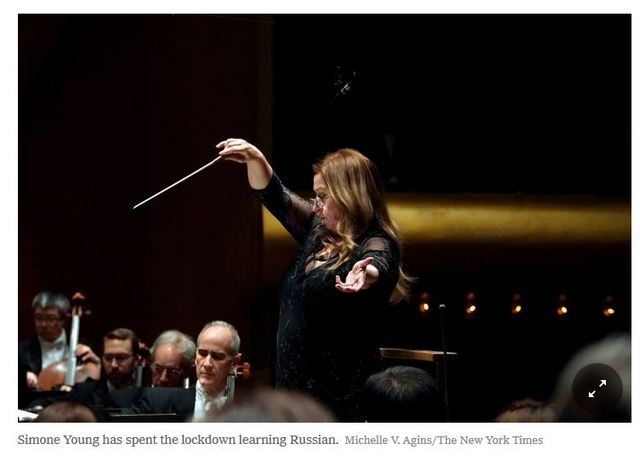 With most orchestral concerts canceled, conductors have been largely invisible.

On March 12, Roderick Cox, an American conductor based in Berlin, was just days away from his New York Philharmonic debut when he woke up to a message from the orchestra asking him to get on the next possible plane out of Germany.

The United States was closing its borders to Europe because of the coronavirus pandemic, and Mr. Cox scrambled to leave that day. But while he was still in the air, he got the news that Carnegie Hall was canceling performances until April. So was the Metropolitan Opera. And the Philharmonic.

“It was like the stock market was crashing,” Mr. Cox recalled in an interview. Once he got to his hotel in New York, he found himself asking a question rare for conductors, whose schedules are typically planned years in advance: What now?

As the pandemic ravages the classical music industry, with performances at a standstill in the United States and Britain, and only slowly returning in Europe and parts of Asia, conductors are in an unfamiliar position. Typically front and center, many of them have been invisible as artists resort to solo livestreams. Spending time alone studying scores has always been part of their work, but without orchestras, they can go no further.

“We don’t make sound as conductors,” said James Gaffigan, who had been set to lead the opening night of Rossini’s “La Cenerentola” at the Met on March 12. “So we can’t do our craft right now.”


Some conductors never really stopped. Alan Gilbert, the Philharmonic’s former music director, is now based in Sweden and said that, because of that country’s strategy in managing the virus, “I was one of the busiest conductors in the past several months, by no way of bragging.” Like other artists who have been able to work, he has done so with a twinge of guilt, fully aware of the precariousness facing his colleagues worldwide.

And those who remain away from the podium, especially conductors with posts at orchestras, recognize that they worry about the industry from a position of privilege. Overall compensation for Jaap van Zweden, the Philharmonic’s current music director, has been reduced by 56 percent, according to the orchestra. But that’s from a total of at least $1.6 million a year.

So for conductors with steady work before the pandemic — globe-trotting and rarely home — the aftermath of cancellations has amounted to a surprise sabbatical. They have learned new languages, picked up old instruments, and composed. And they have begun to reimagine performances for the coming year.


The first days weren’t so productive. Mr. Cox described “going in and out of hope and depression and purpose,” and not wanting to study — or even listen to — music. Marin Alsop, the Baltimore Symphony Orchestra’s music director, said she felt “a strange kind of withdrawal.”


Mr. van Zweden is with his family in the Netherlands and has been working to expand the number of facilities his Papageno Foundation runs for autistic children and young adults. He has also taken up composing — “just to expose what I am going through as a human being.”

John Eliot Gardiner, who had been touring a Beethoven symphony cycle this year that has been repurposed as a video series on YouTube, retreated to the British farm where he has lived since the late 1960s. He has been at work on a book about Monteverdi, based on a podcast project due out this year.

“I’m lucky,” he said. “And I hope I will produce something that’s worthy of the privilege of having this time.”


Other conductors have focused on domestic projects. Santtu-Matias Rouvali has continued to occasionally conduct — especially in Tampere, Finland, near where he lives — but said he had also been able to devote himself to fishing and woodwork around his countryside home. Simone Young, an Australian conductor based in Britain, finally had time to tackle a long-running list of things she wanted to do, such as learning to make a tarte Tatin.

“But like most people,” she said, “I ticked those things off within the first few weeks.”

Now she has Russian lessons every day; other colleagues have also taken the opportunity to learn a new language in earnest. Most studying, however, is reserved for scores. With room to breathe before a planned performance of Beethoven’s “Missa Solemnis” next year, Ms. Young has gone beyond the music to research the work in relation to the writing of Thomas Mann and Theodor Adorno.

Miguel Harth-Bedoya, in his final season with the Fort Worth Symphony Orchestra, which is planning a brief return for an online concert on Independence Day, said that he had been exploring the works of Bohuslav Martinu for the first time. Mr. Rouvali is doing the same with Schumann and Mahler. And although Mr. Gaffigan’s summer run of Wagner’s “Tristan und Isolde” with Santa Fe Opera was canceled, he is still studying it because, he said, “there are certain pieces of literature that are worth reading even if you’re not doing a thesis on them.”

Erstwhile instrumentalists have revisited old études. Susanna Malkki — who was to conduct Kaija Saariaho’s new opera, “Innocence,” at the Aix Festival in France and is there now for small-scale rehearsals in anticipation of its future premiere — said that practicing her cello had been “like coming home.” Alondra de la Parra has taken up the piano again, and said that playing with no specific goal “has already made me a much better musician over all.”


Joshua Weilerstein, the artistic director of the Lausanne Chamber Orchestra in Switzerland, has used a set of exercises by his father, Donald Weilerstein, to get back into shape as a violinist. He has invited 44 other players to join him remotely in a series of Bartok duos that were posted online and have doubled as a fund-raiser for social justice causes. He has also worked on his podcast, “Sticky Notes,” earning some money from fans through its Patreon page.

Ms. Alsop, who teaches at the Peabody Institute at Johns Hopkins University, has been working with the school to develop virtual reality tools for podium-deprived conducting students. Others with directorships have been planning for what concert life will look like as it returns in phases. In Louisville, Ky., Teddy Abrams of the Louisville Orchestra said that he had spent his time away from the concert hall rethinking the fall as a series of public service events, adding, “A lot of what we’re talking about is less in the form of concerts and more in the form of projects.”

Orchestras in Europe have been less drastic in their approaches, working on a smaller scale rather than reimagining the concert experience. Klaus Makela, the Finnish conductor who was recently appointed music director of the Orchestre de Paris, said that he was reconsidering some repertoire for his coming season, adding with a laugh that Messiaen’s grand “Turangalîla-Symphonie” will “obviously have to change.”

Performances that have begun to go forward may be more humble. But for conductors who have been away from the stage, they have been overwhelming. Mr. Gaffigan, a New Yorker now in Norway, said that when his long break ended with a rehearsal of Schubert’s Fifth Symphony in Stavanger, he couldn’t wipe a smile off his face.

“It was this basic thing that I took for granted my whole life,” he said. “The sound of someone playing in a room with me, and being able to react to and mold that sound — it’s such a privilege. Live performance is so special.”

Re: ‘We Can’t Do Our Craft’: Conductors Contend With the Pandemic

I remember those feelings of withdrawal and emptiness when I had to give up conducting my competition after 10 years in Carnegie Hall because of my sleep disorder. It was a real low point in my life, and, yes, I withdrew from listening to opera for quite a while, preferring chamber music and jazz. It's definitely a shock to the system to give up performing on a regular basis so suddenly, but somehow one does get on with life.

Performing with top musicians in a world-class hall fills you with a great joy from creating music together. The endorphins released become addictive, particularly for sopranos and tenors with their high notes (I've studied the physiology of this and, yes, it's true, high notes are addictive to singers: they feel a rush of happiness whenever they hit a high C!). Leaving that can cause symptoms of depression, loss and sadness. Musicians perform because that's how we're made, it's what we must do with our lives. To lose that purpose can be devastating, and I feel for the musical community so much in these times.
Top

Re: ‘We Can’t Do Our Craft’: Conductors Contend With the Pandemic

maestrob wrote: ↑
Sun Jun 28, 2020 10:59 am
The endorphins released become addictive, particularly for sopranos and tenors with their high notes (I've studied the physiology of this and, yes, it's true, high notes are addictive to singers: they feel a rush of happiness whenever they hit a high C!).

Brian and that's how I feel just listening to those sopranos and tenors! Regards, Len