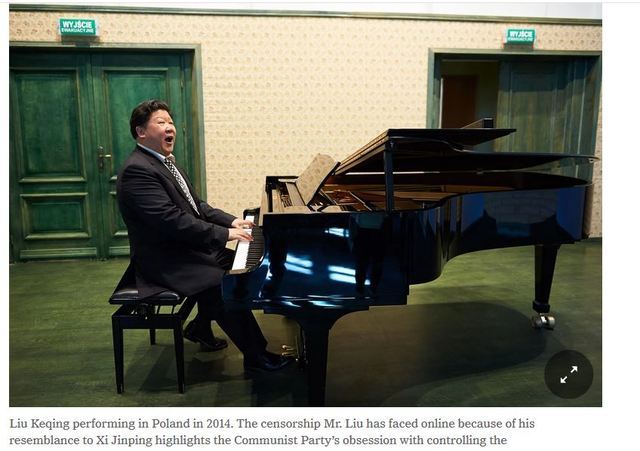 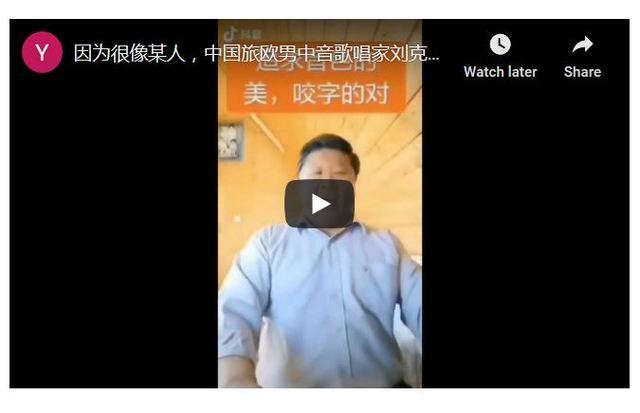 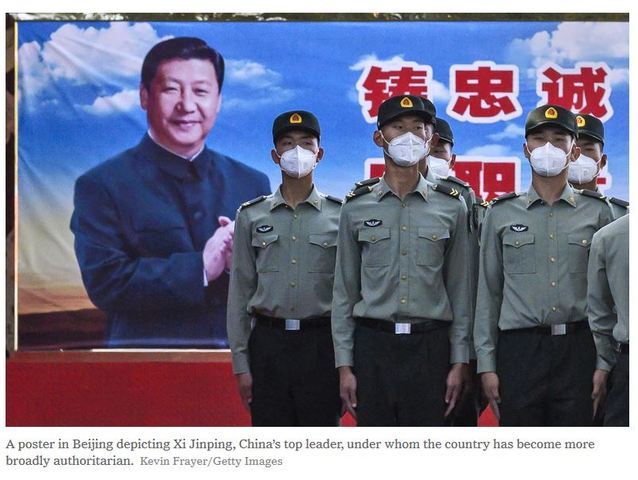 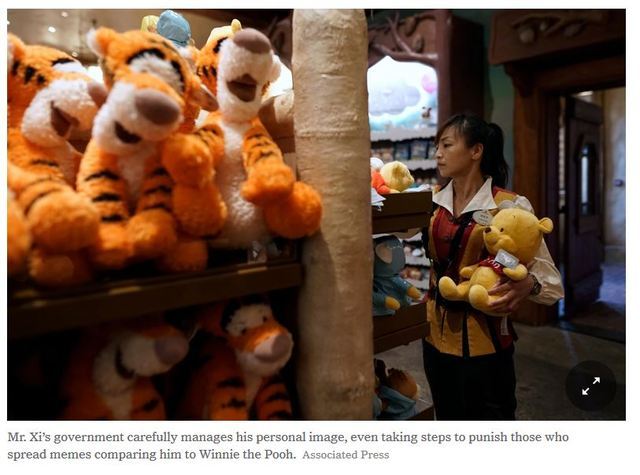 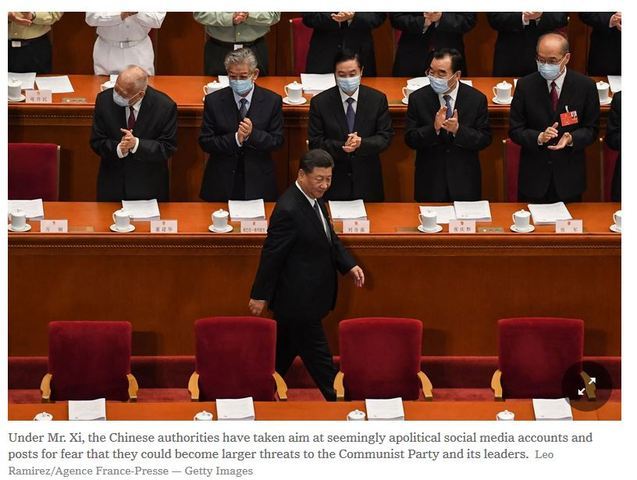 The baritone Liu Keqing has spent his career delighting fans in opera houses and on social media, but lately his likeness has attracted the Chinese authorities’ attention.

The long stares and startled whispers — Is that him? — begin as soon as Liu Keqing, an imposing Chinese baritone, enters any room in China. With a square face, closely cropped black hair and a portly figure, Mr. Liu bears a striking resemblance to Xi Jinping, China’s top leader.

Mr. Liu, who has spent his career in opera houses, used to welcome the attention. But now, in China’s increasingly authoritarian system, his resemblance to Mr. Xi has drawn him into an Orwellian saga in which his name, his face and his very likeness are considered sensitive by the Chinese authorities.

Mr. Liu’s name has been censored online. His social media accounts, which have featured photos of him dressed in a suit and tie that evoke Mr. Xi, have been repeatedly shuttered. Censors block comments on some of his instructional videos, in which, sitting at home in a white sweatshirt, he offers energetic tutorials on vocal warm-ups and singing bel canto.

His experience is an offbeat manifestation of the governing Communist Party’s obsession with controlling the internet. In China, the sensitive censors can ensnare even those who have no political agenda.

“I don’t understand,” Mr. Liu said in an interview, referring to the constant censorship of his social media accounts. “Maybe the country has security concerns.”

Under Mr. Xi, the authorities have worked to seize greater control over the thoughts and musings of China’s more than 900 million internet users, leading aggressive campaigns to stamp out dissent, activism and even jokes.

The authorities are particularly cautious about freewheeling discussions of Mr. Xi, China’s most powerful leader in decades. Mr. Xi presents himself as a down-to-earth, accessible figure. But his government obsessively manages his image, jailing critics for mocking him as a “steamed bun” on social media and censoring playful memes comparing him to Winnie the Pooh.

Mr. Liu is neither government critic nor activist. He is best known as an arts manager and opera singer who runs an opera house in Beijing and has starred in dozens of productions in China and elsewhere over the course of his 47-year career.

About three years ago, though, people began looking at Mr. Liu differently, he said. Tourists asked for selfies, strangers gave him odd looks and flight attendants treated him with special gifts. They were amazed at how much Mr. Liu, 63, resembled Mr. Xi, 67, who is roughly the same height (5 feet 11 inches) and speaks in a similarly deep voice. Both men are from Beijing.

“They kept saying it,” Mr. Liu recalled. “But I didn’t feel I looked similar.”


Mr. Liu was at first happy to oblige the attention, even as he told his friends and students, “Don’t talk nonsense,” when they brought up the similarities.

While Mr. Liu was visiting tourist attractions in the southern province of Hunan a few years ago, a line formed as people asked him for photos. He spent more than two hours posing for pictures — so many that his friends joked he should charge 10 renminbi, or about $1.40, each.

Last fall, when Mr. Xi was preparing to preside over celebrations marking the 70th anniversary of the founding of the People’s Republic of China — one of the most tightly controlled spectacles of the decade — Mr. Liu’s resemblance started to become a liability.

His account on TikTok, where he had built a following of nearly 300,000 people for his eccentric videos on vocal techniques, was suddenly deleted. Mr. Liu’s profile picture showed him wearing a suit and red tie, which resembled some of Mr. Xi’s official portraits.

Many people commented on the similarities. One of Mr. Liu’s videos on the bel canto style attracted more than 370,000 likes in two days, “not in support of my good singing, but because I look like a national leader,” Mr. Liu wrote at the time on WeChat, a popular messaging app.


“In order to keep ‘trouble’ from stirring, they’ve blocked my TikTok video,” Mr. Liu wrote. “Argh! What can be done?”

Mr. Liu tried to open several new accounts but was blocked after internet users reported that he had violated standards by using someone else’s image. He denies that he has ever exploited the similarities with the Chinese leader for his own gain.

He was able to open an account after he changed his profile photo to a man in yellow hat. He now has about 41,000 followers, but comments on many of his videos remain blocked across Chinese social media platforms, including TikTok, Weibo and Bilibili.

In order to evade censors, some commenters have taken to discussing Mr. Liu’s resemblance to Mr. Xi, the leader of the Communist Party and the chairman of the military, in cryptic ways.

“Thank you, chairman,” an internet user wrote beneath a video of Mr. Liu singing “My Chinese Heart,” a patriotic tune. On another video, a user said that Mr. Liu had “the appearance of an emperor.” In yet another post, a user was more direct: “Too scared to comment.”

Mr. Liu may have drawn scrutiny because the authorities are worried his page could provide a forum for criticism of Mr. Xi and the government, experts said. Mr. Xi does not have an account on Weibo or any social media presence. On Baidu, the Chinese search engine, the most frequently searched terms for Mr. Liu are “Liu Keqing looks like someone,” and “Liu Keqing Dada,” a reference to a popular nickname for Mr. Xi, “Xi Dada,” or Uncle Xi.

“The idea of control has gone beyond strategic purposes,” said Jennifer Pan, an assistant professor of communication at Stanford University who is an expert on Chinese censorship. “In the Xi Jinping era, sometimes it’s control for the sake of having control.”

While Mr. Liu has never met Mr. Xi, he once produced an opera that included a leading role for Mr. Xi’s wife, the singer Peng Liyuan. Mr. Liu said that if he had the opportunity to meet the president he would perform a song based on a poem that Mr. Xi wrote in 1990 to remember Jiao Yulu; Mr. Jiao is a model party cadre whom the Chinese leader often invokes when speaking about the need to eliminate corruption.

Mr. Liu, a self-described patriot who began his career as a singer in the navy’s South Sea Fleet at age 16, said he was not bothered by his brush with the censors and did not want to “make trouble for the country.”

“Others say we look alike, but I don’t dare have too many ideas on this,” he said. “I’m just a normal person and a normal artist.”