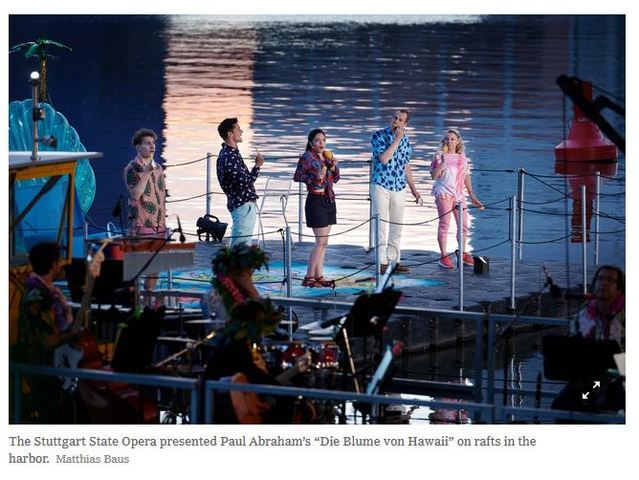 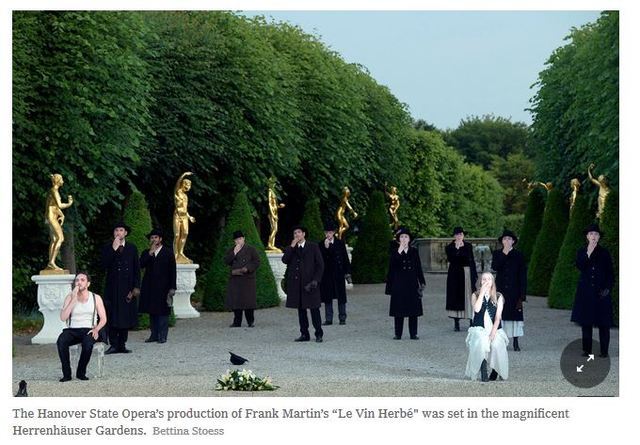 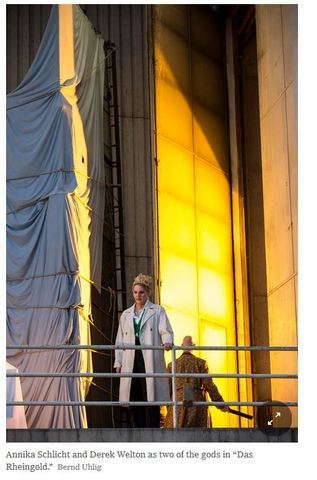 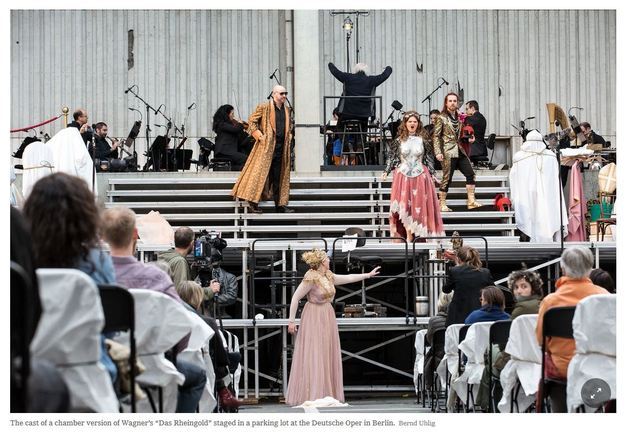 Three productions under unusual constraints show how the art form is gradually re-emerging in the pandemic.

BERLIN — The Rhinemaidens lament their lost gold on asphalt. Tristan savors doomed love in a stately 17th-century garden. A motley crew of playboys and deposed royalty are set adrift in an industrial harbor.

This is what opera in Germany looks like in the midst of a pandemic.

The coronavirus outbreak has disrupted live performance around the world. And of all art forms, opera is particularly ill-suited to limitations on large gatherings, by dint of its size, complexity and cost.

But nearly three months after the virus scuttled the remainder of its season, the Deutsche Oper here became the first company to perform grand opera while complying with hygiene and distancing regulations. In a nod to the canceled start of its much-anticipated new “Ring” directed by Stefan Herheim, the company mounted an alternative “Das Rheingold” in an unexpected outdoor location last month.

You’ve heard of Shakespeare in the Park. How about Wagner in the Parking Lot?

In an opera-rich city starved of the art form for months, interest was predictably high, and the company said the performances, each with about 200 seats for five euros (less than $6), sold out online in minutes. The Deutsche Oper used Jonathan Dove’s 1990 reduction of the score for 22 musicians and 12 singers, which shaves about 40 minutes off the two-and-a-half-hour running time. Many of the singers scheduled to sing in Mr. Herheim’s production still appeared, and Donald Runnicles, the company’s music director, remained on hand to conduct the diminished musical forces with a muscular conviction and dramatic flair that made this chamber version sound remarkably full.

As a preamble to the “Ring,” “Rheingold” is fast-paced and witty, something of a punchy political cartoon. The director, Neil Barry Moss, did a clever job of working around both virus regulations — the singers needed to maintain five feet of distance from one another — and the peculiarities of a makeshift outdoor stage made up of little more than a few rows of stadium seating.

The orchestra (which was amplified) played from behind the singers (who were not), below an overhang that protected them from the threat of rain. The parking lot, surrounded on all sides by the opera house and its administrative buildings, had remarkably good acoustics.


The singers entered and exited through a central aisle between the rows of plastic chairs on which the physically-distanced audience sat. There was a special thrill in having the cast breeze past at regular intervals. (The audience was required to wear masks except during the performance).

In his metatheatrical production, Mr. Moss cast Wotan — the god who uses stolen gold to pay for his new castle, Valhalla — in the role of a stage director, and the bass-baritone Derek Welton played him as a high-strung creative type overseeing rehearsals. Loge, the fire god (the tenor Thomas Blondelle), zoomed around with large Starbucks cups, personalized with the names of the gods, as Wotan’s put-upon personal assistant. Other touches were equally cheeky and effective: Assorted props represented the gold; a bound copy of the score stood in for the ring; and, in a climactic reveal, Valhalla was the opera house itself.


Stripped-down and irreverent, the production highlighted the intimate qualities of “Das Rheingold” within the epic cosmos of the “Ring.” It never felt like a compromise.

While the Deutsche Oper did its best to adapt Wagner to these extraordinary circumstances, the Hanover State Opera, in northern Germany, inaugurated a virus-friendly summer program with a work that was ideally suited to the new restrictions: Frank Martin’s “Le Vin Herbé.”

First performed in 1942, “Le Vin Herbé” is a haunting, difficult-to-characterize work inspired by the Tristan myth. Martin called it a secular oratorio, but there’s a long tradition of staging it as an opera. Scored for seven strings, piano and 12 singers (six men and six women) who chant a libretto that offers little in the way of conventional dramatic development, it can feel like a rebuttal to the lush Romanticism of Wagner’s “Tristan und Isolde.” Martin’s austere musical language, hovering on the threshold of tonality, is hypnotic.

The performances, beginning June 19, took place in the Baroque “Gartentheater” of the magnificent Herrenhäuser Gardens, which belonged to the kings of Hanover. There was special significance in the fact that this was the site of the first opera performance in Germany after the end of World War II in Europe: “Cavalleria Rusticana” and “Pagliacci,” on July 11, 1945.


The stately setting was an unexpectedly apt complement to the music and Wolfgang Nägele’s simple, mournful production. The sides of the deep stage were flanked by golden statues and hedges. Flocks of bird soared overhead. Even in the midst of a persistent drizzle, most of the roughly 200 spectators remained to the bitter end.

Stephan Zilias, the company’s incoming music director, stood at a podium halfway between the musicians, who were protected by a tent, and the singers onstage, who were not. Despite the rain, all soldiered on with unbroken concentration. The result was a performance whose steely excellence helped make up for some discomfort caused by the inclement weather.


Water was also central, though intentionally so, in the Stuttgart State Opera’s production of Paul Abraham’s 1931 jazz operetta “Die Blume von Hawaii,” staged at that southern German city’s harbor. Performed over the first weekend of July, “Hawaii” was the first of two harbor productions created under unusual constraints: They couldn’t exceed 70 minutes, five cast members or 10 days of rehearsal. (The second was Leonard Bernstein’s “Trouble in Tahiti.”)

Arriving at the harbor, the audience put on wireless headphones and sat on wooden shipping pallets. A couple of hundred feet below, in the middle of the waterway built along the Neckar River, the singers and musicians occupied separate rafts while bringing to life this widely forgotten Weimar-era work, with its infectiously tuneful score and firecracker lyrics.

Sebastian Schwab’s reduction for an eclectic variety of instruments — including banjo, violin, saxophone, vibraphone and, briefly, steel guitar — was skillful, even if the opulence of Abraham’s original orchestrations was lost. Marco Storman’s sparse production jettisoned the convoluted plot in favor of a quick-and-dirty staging that winked at the work’s exoticizing tendencies and its stereotypes about Pacific Islanders. (I was amazed to find that quite a number of people in the audience had donned Hawaiian-print shirts for the occasion.)

The image that has remained with me after sampling some of Germany’s intrepid efforts to make opera in the age of the coronavirus is the closing tableau of “Das Rheingold.” The gods prying open the massive door that services the stage of the Deutsche Oper powerfully symbolized the deep wish for this country’s — and the world’s — curtains to rise once again. The blaring chords that accompany the gods’ entrance to Valhalla had never sounded so joyous.

Users browsing this forum: No registered users and 77 guests