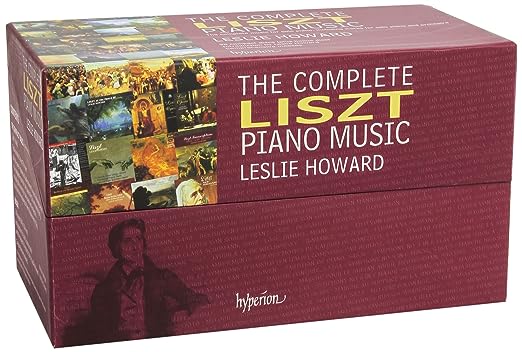 Nearly 10 years ago, Liszt specialist Leslie Howard released the above box on Hyperion which, thankfully, is still in print. As a lover of piano music, and especially of Liszt, I've been salivating over acquiring this set for years, but have never actually worked up the gumption to purchase it.

This morning, I'm listening to one of the discs issued as a single release years ago, the Waltzes, and marveling at Howard's brilliance.

So, I'm asking those of you who have this box and have lived with it a while, what do you think of what you've heard?
Top

This box has come up a few times over the years. This is what I said on April 16 this year, after Rach3 posted a Howard video:
Leslie Howard, as I'm sure you all know,comes from Melbourne, the city where I have lived for 42 years, though by the time I arrived he had departed for London, where he has lived since 1972. We're still allowed to claim him, though.

I have his complete Liszt recordings, which is an extraordinary accomplishment (by him, not me). To learn and play all of that is just astounding. He is a really fine pianist without being a genius. He would not, for example, be my first choice in the sonata, where I have 30 interpretations including Argerich, Brendel, Horowitz, Richter, Rubinstein, Arrau, Curzon and Trifonov.

But the more I listen (and I've only got through half the CDs at best, of which there are nearly 100 - 99, to be precise), the more I appreciate his straight-forward style. And you can see it at work in this video.

Nothing has changed since April, Brian. I haven't revisited the set, but I consider it a monumental accomplishment - absolutely monumental.

Also, in searching for that thread, I came across this much longer but still interesting thread on the box, in which JohnF waxed eloquently against, but on principial rather than performance grounds:
http://www.classicalmusicguide.com/view ... rd#p407307
Top

Thanks for finding that thread, Barney! After re-reading it, I remember being quite influenced by John Francis's opinion at the time, which probably was why I held off buying Howard's box at the time. I might also add that your rather blah but brief assessment also contributed to that decision as well.

Now, however, hearing Howard's inspired playing in his single disc of Liszt's waltzes has brought the subject up for me again nearly a decade later, so I'm now re-evaluating my choice at the time.

Sure, I have Bolet's box of many major works, and other individual issues of great interpretations of various repertoire, but since I've lived this long and am still in reasonably good health, I'm more and more impressed with Howard's historical achievement.

Any other opinions out there?
Top

Sorry if I put you off Brian. I wasn't aware that anyone listened to me - they certainly don't at home!

I bought all of Howard's Liszt cycle singly. Should have waited, but sometimes we can't wait. Over all, it is a marathon project. Like others, more of the major Liszt pieces I prefer by other pianists, but Howard renders it all quite stunningly. When I come out with my own complete Liszt works on DGG, you can weigh mine against his or Horowitz's!

Lance wrote: ↑
Fri Aug 21, 2020 10:33 pm
I bought all of Howard's Liszt cycle singly. Should have waited, but sometimes we can't wait. Over all, it is a marathon project. Like others, more of the major Liszt pieces I prefer by other pianists, but Howard renders it all quite stunningly. When I come out with my own complete Liszt works on DGG, you can weigh mine against his or Horowitz's!