A friend sent me this article-don't know if I fully buy it. Regards, Len 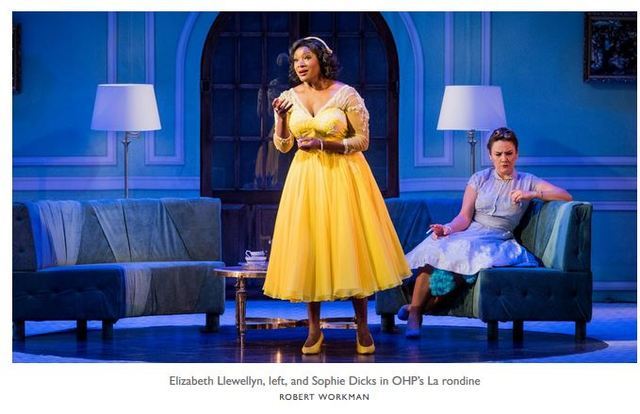 Opera has always encouraged the creative desire to go bigger, grander, more mind-bending. Perform it before the Great Pyramid of Giza and it will amplify even that wonder of the world. Opera houses around the globe have for years served the egos and chaotic genius of practitioners. But I have never fully bought into the grandiose version of opera, overwhelming though its impact can be. Grandiosity fuels the egos of non-geniuses too, and it has become difficult to distinguish between the two — we only realise what’s happening when disaster strikes, as it has this year.

We now have a chance to jettison the non-geniuses and repurpose our art form. We can rethink opera so that when venues reopen it will emerge more resilient and more exciting. If we must perform to smaller houses for a while, we must do it in a way that doesn’t break us; the government will not underwrite our empty seats. But becoming leaner and meaner now will make us match fit for when full houses return.

First, we have to slash our costs. Opera houses in the UK have tried to keep pace with the international scene and have seen their spending grow accordingly, which means fundraising has had to grow too and ticket income has become more critical. (Aiming for full houses is never a bad thing, but needing them most certainly is.)

Does the ability to produce thrilling opera need to cost so damn much? No, is the answer. A really great designer or director will respond to a slim budget with exciting creativity.

Our summer festival at Opera Holland Park (OHP), where I have worked for 31 years, doesn’t compete in the grand opera stakes. Its aim has always been to create new ways to stage opera and, crucially, to find emerging singers. But OHP’s budgets are still part of a star system that needs fixing.

Opera singers are not like actors, who can go on to enjoy success in film and television. Singers do not have the same routes to exponential riches, so those with exceptional talent or appeal naturally have to capitalise on it within a relatively small industry. But is one singer really worth £50,000 per performance when another costs £5,000? Is the difference that profound? And it isn’t just singers: one summer festival I know of typically spends £120,000 on a set; OHP spends £30,000. Boards need to be vigilant about this kind of razzle-dazzle.

Some smaller houses and companies still engage expensive stars — but then need to ask wealthy individuals to help to make that possible through donations. Their ticket prices need to rise to meet the expense as well, and so the creation of a whole damaging edifice of elites and wealthy patronage becomes inevitable. Worse, price becomes the barometer of quality in the minds of audiences.

The lockdown crisis is a chance for the opera ecology to remodel itself into something that’s more cost effective and fleet of foot, transportable to more corners of the country and divested of some of its image problems. It would in the process provide more employment at fair and reasonable rates of pay for a greater number of singers, technicians and artistic personnel.

What I am proposing is a spreading of wealth throughout the industry, from top to bottom: “opera socialism”, if you like, although not the Christian socialism of Lilian Baylis’s opera-making, designed to get the working class off the streets and off the booze. My version would wean the industry off the need for ever larger cash injections and a razor-edge existence.

The audience must play a part too. Those with the funds to support opera should not be pouring them into a very small vector, such as a show or a season; their generosity needs to spread wider than supporting a role at a major house. The greatest successes at OHP have been, in my opinion, performers the audience has never heard of before. But the industry is rapacious in grabbing and elevating excellent singers and making “stars” of them; and, in turn, the pool of donors and sponsors is convinced that the only worthwhile contribution is to a narrowing number of companies where “stars” perform.

This is natural, perhaps, but it often leads to ruination for the overworked and precipitously elevated singers, as well as for the companies cut out of the deal. Part of the new world will be to recalibrate the audience’s perception of what the opera hierarchy looks like, and to open their eyes to the idea that brilliantly, but inexpensively produced opera, cast with emerging or “unknown” singers, provides as many thrills as the grander kind. We have all been left cold by a lavish, star-studded production.

Those who at present represent excellence have to contribute to this reduction in costs — although I have my doubts that the national houses will join the revolution. Inequities of pay across the house and production must be rebalanced. Perhaps a repertory model, where singers are engaged for whole seasons, needs re-exploring. And there are a lot of very talented singers, directors and designers not getting opportunities. Our industry is rightly alarmed by the restrictions of Brexit, but perhaps giving more British singers a career here might result; let’s provide the work.

The top-heavy nature of funding must be fixed too, with money spread more evenly throughout the industry. A company such as OHP can provide free opera to 30,000 people on £1.6 million. It concerns me that a £24 million annual subsidy at the Royal Opera House represents only 20 per cent of what they need. There will be pain for some, but they will adjust quickly. OHP has managed to cut its budgets significantly for 2021. That has meant lots of people making sacrifices. But I don’t think audiences will feel disappointed.

The friend also sent someone's reply-don't know if I buy that either.

I have nothing but respect for you Michael (and I was there for your very moving speech three weeks ago) but ‘slimming down’ is emphatically not the way ahead.

Let me explain: I spoke to at least six singers that night - and at least three of them were considering leaving the industry altogether (and we’re talking Jette Parker graduates here - one is already working in a hospital, another I know has given up entirely at the age of thirty-four and taken a job as a financial adviser). As we both know - but readers may not - opera singers are all freelance. They have had no income at all for newly six months now.

Opera Holland Park is only able to ‘slim down’ by not employing those singers (and musicians) and it can only do so because they are not full-time staff with proper contracts.

But the Royal Opera? Without which OHP would not have those Jette Parker graduates? It can only function at full capacity. It has permanent contracted staff and management and without it functioning full-on the rest of the opera world would soon notice the dearth of talent of all kinds that it inspires and nurtures - opera needs administrators and lighting engineers and producers too.

The solution? It is now clear that COVID only attacks the at-risk (unlike ‘normal’ flu which is indiscriminate and is now killing more Britons than COVID). So the opera houses and theatres need to fully reopen.

Attendance is voluntary - and price points may need to be modified to attract a younger audience - but performers, with vanishingly few exceptions, are itching to return to the stage and the pit, as are all those I have spoken to in management and behind the scenes.

So let’s do what’s best for everyone concerned: fully reopen these companies and theatres as soon as possible.
Top

The whole debate here is nonsense!

Covid-19 will pass, and things will return to normal.

Opera stars are paid according to their ability to draw an audience and give them a deeply moving performance. Only great singers can do that, and they should be paid accordingly. Here in NY, New York City Opera gave young singers of mostly mediocre talent a chance to be heard at reduced ticket prices: they are gone now. Sure, discoveries were made there (Domingo, Sills, Triegle, etc.), but mostly their performances of standard repertoire could not compete with the MET across the plaza.

As for the Reply, it's ridiculous to talk about re-opening theaters with "voluntary" attendance! Pure nonsense that put the whole population at risk!

The Reply says: "The solution? It is now clear that COVID only attacks the at-risk (unlike ‘normal’ flu which is indiscriminate and is now killing more Britons than COVID). So the opera houses and theatres need to fully reopen."

Egads.No wonder the virus is winning.

Yeah, that's what I was thinking-our first opera is Jan 4 of 2021-I don't even know if things will be safe by then! I wonder about how safe staying at a hotel is not to mention the bus to the Port authority and the subway! Regards, Len

"Smaller scale opera " certainly has its place, and I have no objection to it . But there is absolutely nothing wrong with lavish productions of larger than life operas such as Aida, Wagner's Ring, La Gioconda, the Meyerbeer operas , Messiaen's Saint Francis , Les Troyens by Berlioz, and others .
True, these are really expensive to put on, but they're worth it ! Because of the corona virus, it may soon become totally impractical to do the big, grandiose operas for who knows how long, but I for one will welcome their return .
Top

THEHORN wrote: ↑
Wed Aug 26, 2020 6:44 pm
True, these are really expensive to put on, but they're worth it ! Because of the corona virus, it may soon become totally impractical to do the big, grandiose operas for who knows how long, but I for one will welcome their return .