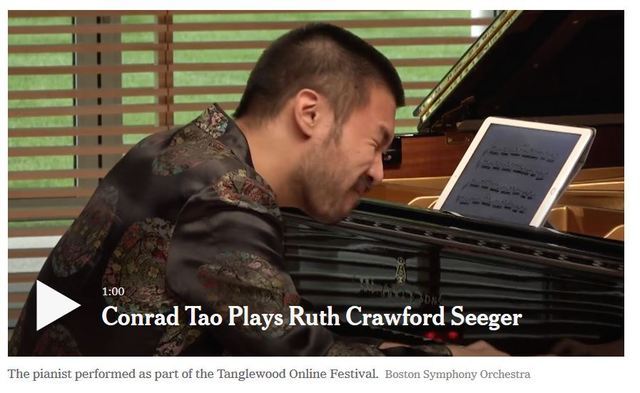 With performances silenced by the coronavirus, our chief classical music critic has been left wishing for more sound, not less.

Typically, the end of August through Labor Day is an ideal time for me to take a two-week vacation. Classical music tends to take that time off, too. After a jam-packed concert season and a slew of summer festivals, everything seems to stop for a bit before the ramp-up to fall.

It’s a welcome break not just for musicians and institutions, but also for devoted music lovers. We can refresh our ears and recall the performances we’ve heard.

But this year things stopped back in mid-March, when the coronavirus pandemic shuttered concert halls and opera houses worldwide. Most performances in the United States have been canceled at least through the end of the year. So some surf and sand will not feel the same to me as in years past. Rather than enjoying the quiet, I’m yearning for music.

The shutdowns have been devastating for American classical music, given its dependence on patronage — which has been eroding of late — and the lack of meaningful government support, which still props up institutions in Europe. It’s depressing to read all the social media posts by accomplished freelance artists who have been without work for months and can have a bleak view of the future.

When everything is running normally, in a city like New York there are performances galore — perhaps more than any of the other live arts. Just at the Juilliard School, there are some 700 performances a year, about 85 percent of them free. There are often several superb concerts a day. For many of these, there are no tickets; you just walk in. So much for the unfair perception of classical music as elitist and expensive.


Even during the busiest weeks of the season, when I attend performances almost every night, I’m only sampling a fraction of what’s available. Yet just knowing that all those concerts are taking place, from smaller spaces like Roulette in Brooklyn to the grand stages of Carnegie Hall and Lincoln Center, testifies to the richness and vitality of this art form.


But what will happen to live concerts as we continue to struggle with Covid-19? Even after a vaccine becomes available, will audiences still feel jittery about being among crowds? Years before the virus arrived, technological alternatives to in-person performances were becoming more sophisticated and gaining popularity. This year’s cancellations have prodded institutions and artists to release a flood of online programming, intensifying our dependence on these audio and video resources.


Yet I worry that people will grow digitally distant from what is for me and for many a defining element of classical music: the sheer sensual pleasure of being immersed in natural (that is, not electronically enhanced) sound, when a piece is performed by gifted artists in an acoustically vibrant space. Of course, electronic elements have been incorporated into music for several generations: Milton Babbitt’s computer music, Pierre Boulez’s delicate use of electronic enhancements, innumerable works that blend traditional instruments with rock guitars and drum sets. Still, the vast majority of classical performances involve traditionally trained voices and instruments that haven’t changed much in centuries — performing without a trace of amplification.

Thinking back to my earliest memories of operas and concerts, the actual sounds of performances — Leontyne Price’s pianissimo high notes floating up to the balconies of the Metropolitan Opera in “Aida,” Leonard Bernstein unleashing the full power of the New York Philharmonic in “The Rite of Spring” — hooked me as much as the music itself.


One of those “shows” was an exciting hourlong recital that Mr. Tao recorded last month for the Tanglewood Online Festival. For this bold, arresting and brilliantly played program, Mr. Tao juxtaposed new and recent works by Felipe Lara, Tania León, David Lang and Mr. Tao himself, with two iterations of a flinty 1930 étude by Ruth Crawford Seeger and Beethoven’s “Tempest” Sonata at the center. Mr. Tao vividly drew out the organic elements, atmospheric colorings and alternately craggy and mystical moods of the contemporary works, and had the Beethoven sounding audaciously experimental in their company. The camera work was excellent; the audio quality, top notch. Mr. Tao spoke insightfully and charmingly about the pieces he played. This online offering was like a gift in a time of austerity.


Yet it had me thinking back to a performance he gave last fall, his Carnegie Hall debut at Weill Recital Hall, which also juxtaposed recent works by Mr. Lang, Julia Wolfe and Jason Eckhardt with pieces by Elliott Carter, Rachmaninoff, Bach and Schumann. Playing in his bare feet, Mr. Tao had that intimate 268-seat hall feeling like an informal gathering spot to which we had all been invited. Afterward, he mingled with audience members in the lobby.

Try to replicate that experience online. Just a few days after tweeting about the “shows” he had recorded, Mr. Tao was trying to ward off another funk. “Not a bad week to dive back into work and planning and all that jazz considering that I am feeling total hopelessness,” he wrote.

As classical music devotees wait until conditions are again hospitable and fears of the virus past, artists like Mr. Tao are trying to keep the art form going any way possible. I’m thinking of them during my brief time away — and hoping for more music, soon, rather than any more break.

There is NOTHING like the experience of a great live performance!

I sincerely hope that audiences don't forget that. As an optimist by nature (even in these dark times), I still believe that we'll be back to normal once an effective vaccine is invented and distributed. Say by next Spring.

One alarming report about a case of re-infection of Covid-19 from Hong Kong doesn't change that view. At least not yet.

That said, I fear your next scheduled opera trip for January 2021 may be a bit too soon.
Top

Brian, thanks-do you think Gelb will realize that? Regards, Len

If Gelb doesn't realise it, then it won't be too soon...

Barney now you have me sweating with worry! Regards, Len