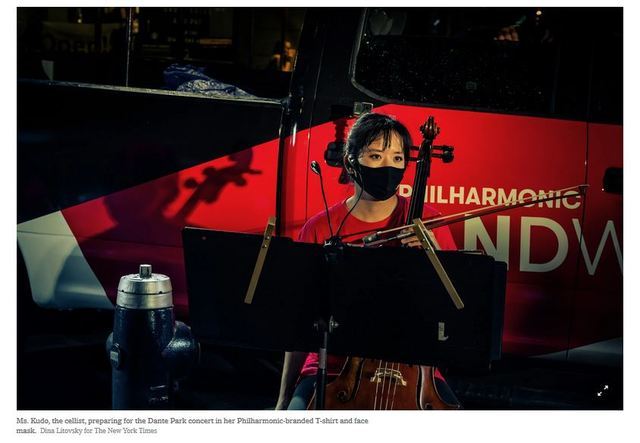 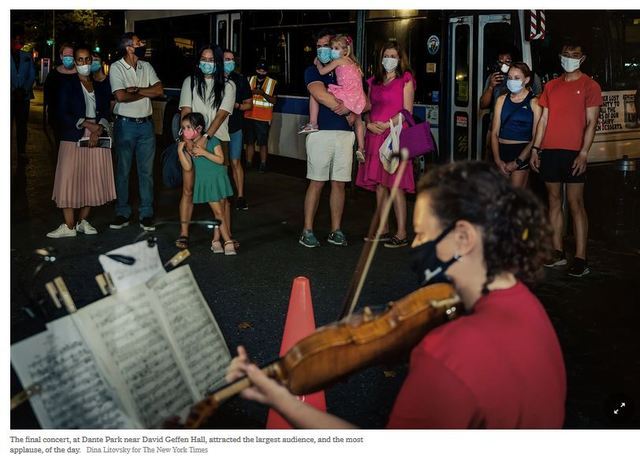 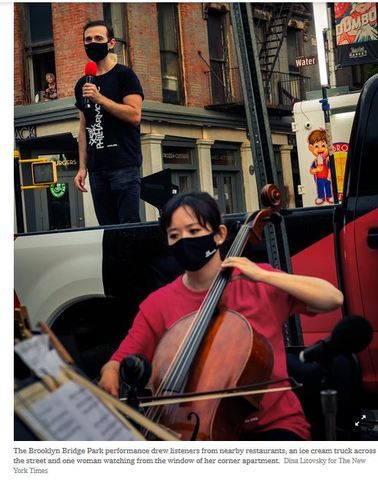 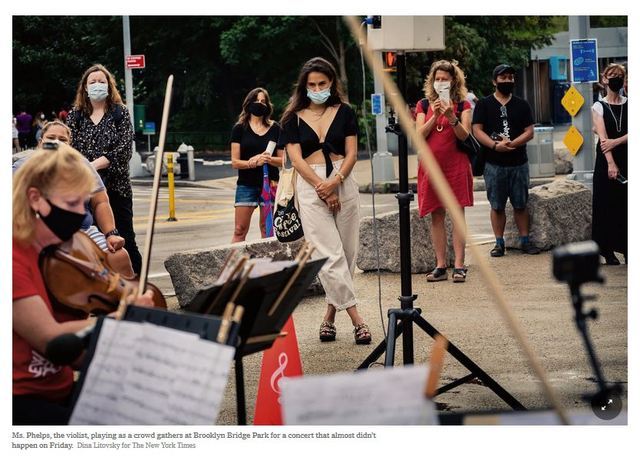 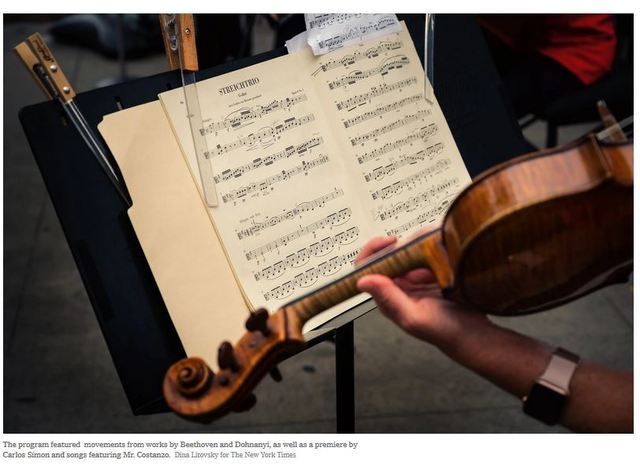 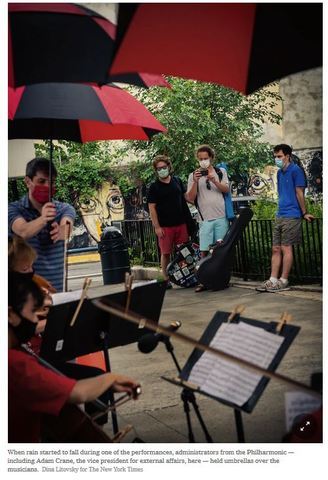 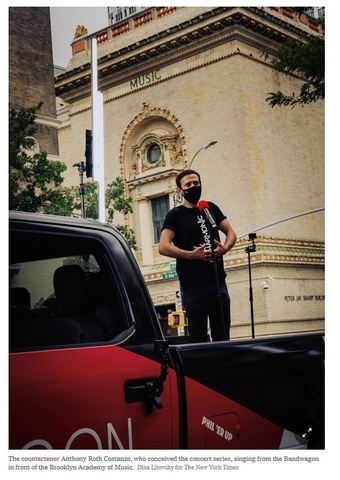 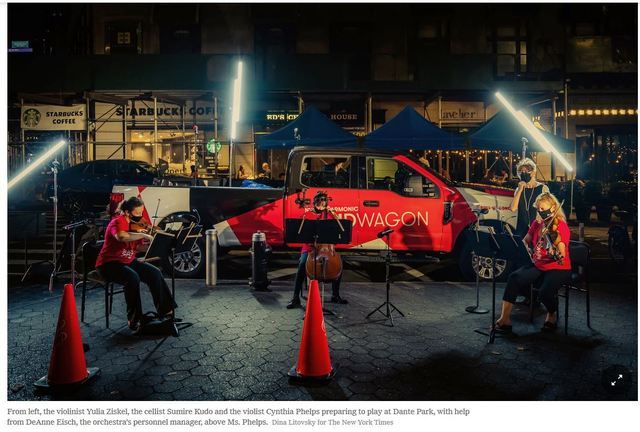 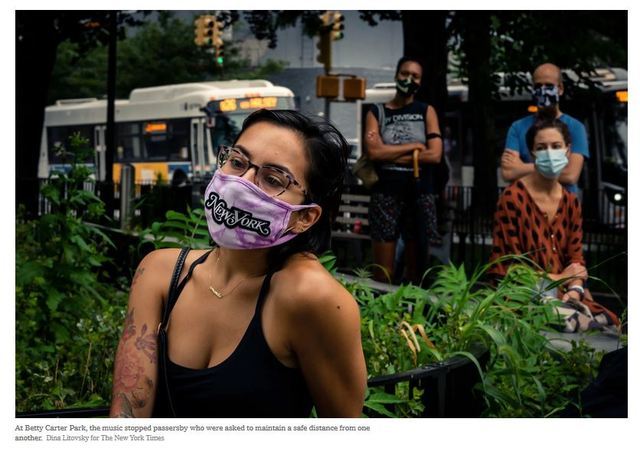 The NY Phil Bandwagon’s pop-up concert series, the orchestra’s first public performances since March, debuted despite rain and other obstacles.

Dark clouds loomed over Downtown Brooklyn on Friday as the countertenor Anthony Roth Costanzo, standing on the bed of a pickup truck, announced to people gathered at Betty Carter Park that they were about to witness a world premiere.

“No one has heard this music before!” he told the small crowd, as if he were a carnival barker. “We are so excited to do this for you.”

Then he cued a trio of players from the New York Philharmonic, which had not given a public performance since the coronavirus pandemic forced it to close in March. The orchestra made its return with this pop-up, pickup concert from what is being called the NY Phil Bandwagon.

The musicians, wearing orchestra-branded red shirts and black face masks, began the new piece, Carlos Simon’s “Loop,” as raindrops started to fall. With the storm rolling in, the piece’s jittery rhythms took on cinematic urgency. Administrators from the Philharmonic opened umbrellas and held them over the trio, who were using their primary — which is to say their most valuable and precious — instruments.


People in the audience were undaunted by the weather, as were the players. Once “Loop” ended, Mr. Costanzo asked if the concert should continue; an answer came from the trio as Cynthia Phelps, the orchestra’s principal violist, shouted “Yes!”

After the performance, while the truck was being packed up and prepared for its next surprise show, Ms. Phelps said she didn’t want to stop because it felt good to be playing with her colleagues again. “It’s reminiscent of what we used to do,” she added.

“It’s a charge,” Ms. Phelps replied. “This is the thing, to groove off each other. It’s not the same when we’re at home doing things over the internet.”

For months, the internet has been the Philharmonic’s only venue for performances — archived material streamed on Facebook, videos of pieces recorded individually and edited together in “Brady Bunch”-like tiles. The orchestra’s last public appearance was an open rehearsal on the morning March 12; by the afternoon, that evening’s concert had been canceled, and now a return to David Geffen Hall is unlikely before a coronavirus vaccine becomes widely available.

When rain started to fall during one of the performances, administrators from the Philharmonic — including Adam Crane, the vice president for external affairs, here — held umbrellas over the musicians.


The NY Phil Bandwagon, conceived by Mr. Costanzo, is bringing the orchestra out of its dormancy. The truck — a Ford F-250 decorated in Philharmonic red, white and black, with touches like a gas cap cover that says “PHIL ’ER UP” — will drive to three unannounced locations each Friday, Saturday and Sunday for the next eight weeks, with small ensembles performing chamber works and recently commissioned premieres.

There is little flexibility in a concert at Geffen Hall; with the program and players planned a year in advance, only encores are unexpected. The Bandwagon, however, is designed to be endlessly adaptable — to weather, crowds or, in the case of Friday’s debut, a demonstration that necessitated a change of venue. A performance can be cut short or extended; repertoire can change at any moment. The series came together quickly and remains a work in progress, especially as organizers work to grow a list of community partners in all five boroughs. A refrain on the first day: “We’re learning as we go.”
Lincoln Center

The day began around 2 p.m. with a soundcheck across the street from Lincoln Center, facing the rear of the Metropolitan Opera and an entrance to the parking garage. Several crew members set up the microphones and lights, helped by Mr. Costanzo and DeAnne Eisch, the orchestra’s personnel manager, who sanitized each stand and seat.

Everyone’s temperature was checked upon arrival, and they were tested for Covid-19 in advance. Adam Crane, the Philharmonic’s vice president for external affairs, described them as being in “a test bubble”; only those in the bubble can touch the equipment, ride in the truck or take part in the performance.

Once the string trio — Ms. Ziskel, Ms. Phelps and the cellist Sumire Kudo — arrived, they played excerpts from the program: movements of works by Beethoven and Dohnanyi, as well as the Simon premiere and, with Mr. Costanzo, vocal music by Handel, Purcell and Gershwin.

This wasn’t an official concert, but an audience formed nonetheless. A man making a Grubhub delivery pulled up on his bike, seeming not to notice amid the music that the bubble tea he was toting had exploded. People recorded on their phones, which continued and was even encouraged (with a hashtag, of course) all day. Gwendolyn Wilson, from Middletown, N.Y., who was in town visiting her daughter, stopped while walking a small dog named Oreo, surprised by what she had found. “I just love music,” she said, smiling.

As if to offer a test for unpredictability, one man walked right into the performance, between the players and the truck. He looked up at Mr. Costanzo, who calmly flashed him a peace sign; he did the same and kept walking until, hearing the sounds of Gershwin’s “I Got Rhythm,” he decided to stay.

The Bandwagon was packed up and driven to Betty Carter Park, where its first actual concert would unfold with the Brooklyn Academy of Music in the background. Already the day had hit a snag: traffic. Mr. Crane and his group arrived first, so they kept a parking space open for the truck by standing in the street. “We wear many hats in this organization,” he said.

It was a loud spot for a string performance. Beethoven was accompanied by a passing cement mixer; a red light forced an orange Jeep Wrangler, Latin music blaring out of its open windows, to stop directly behind the Bandwagon. But the driver muted his stereo and began to mime playing a cello in his seat.

After the first piece, Mr. Costanzo introduced the players and one of the Bandwagon’s partners, Catherine Gray from the League of Women Voters, who came from Park Slope to follow the truck and register voters at each stop.


“We also have our friend selling beautiful towels and sheets over here,” Mr. Costanzo joked, gesturing to a sidewalk vendor parked next to the Bandwagon. “I suggest you check them out.”

The audience grew quickly and fluctuated, gaining numbers as people stepped off the B38 bus nearby and losing some as the rain picked up. Samantha Kucher and Michael Roitman were walking their dog, Baby, and their baby, Simon, who applauded throughout.

“But,” Ms. Kucher added, “he hasn’t been able to go to any music classes because of all the stuff.”
Brooklyn Bridge Park

Each location, Mr. Costanzo said, comes with a backup. The second concert was meant to take place at McCarren Park in Williamsburg, but because of a demonstration in solidarity with a march in Washington for social justice, it was moved to Brooklyn Bridge Park, a site that hadn’t been tested yet. Which might be why the Bandwagon immediately ran into trouble when it arrived.


An officer from the Parks Enforcement Patrol rode up on his golf cart and said the Bandwagon would have to leave without a permit. A small group from the Philharmonic told him that they did have one, but the officer said it wasn’t valid because this was a privately owned area. Mr. Costanzo was insistent; he eventually pleaded the Philharmonic’s case on a long call with an official of the park that ended not only with permission, but also with the potential of a future partnership.


One concession: The program would need to be shorter because Mr. Costanzo had promised that it would last less than 15 minutes. So the group winnowed it down to four pieces and started quickly to make up for the delay.

People brought Shake Shack takeout and listened while eating on benches. The man operating a Brooklyn Ice Cream truck leaned out to watch, as did a woman from a corner apartment across the street. Mr. Costanzo found another potential partner in the teenage drummer Ezra Kessler, who got a shout-out during the performance.

As crew members were packing up, someone noticed that a screw had penetrated one of the rear tires. But that problem could wait until tomorrow.


Friday’s final concert was the closest thing Lincoln Center has had to a public performance since March. Yet it was across the street, not on the campus, which was barricaded and eerily dark, with even its animated fountain stilled.

This time, there were no major obstacles; some trouble with the lighting was easy compared with rain or parks bureaucracy. And a crowd began to assemble before the players even started to tune. Sybil Wa was there with her daughter Gwyn Parkin. They happened to pass a test run last weekend, and Gwyn liked dancing to the music.

“I miss seeing them in the hall,” said Ms. Wa, a Philharmonic subscriber. “This is a very nice way to hear them.”

The busy location, surrounded by outdoor restaurants and shopping, attracted at least 50 people, more than the previous two concerts. At times, it felt like being back at Geffen Hall: Someone was fishing snacks out of a tote from Zabar’s, and a man who talked loudly into his phone was glared at and shooed away.

There would be lessons learned from the day, and small adjustments to be made for the next round of performances — indeed, the next eight weeks. But when Mr. Costanzo and the Philharmonic trio reached the spirited ending of “I Got Rhythm,” it was a relief just to have gotten through the first day.

And the audience responded with the Bandwagon’s biggest applause yet. “We’ve missed you!” one fan shouted.

“Thank you for coming, thank you for sharing this music,” Mr. Costanzo said as he waved goodbye to the crowd. “We hope to find you on a street corner soon.”

Re: With a Pickup Truck and an Open Mind, the Philharmonic Returns

What a fine article! So encouraging! What took them so long!

Re: With a Pickup Truck and an Open Mind, the Philharmonic Returns


Brian I guess corona. This made me think about the decision here in NJ to open indoor eating at restaurants-25% capacity. Some might ask what's taking NYC so long to do that-I'm not one of them being a cautious kind of person-still I really miss those NYC restaurants-I keep wondering when I can taste a Chinese soup dumpling again--when can I get back to the Grand Central Oyster Bar for the best raw oysters I've ever had! Regards, Len 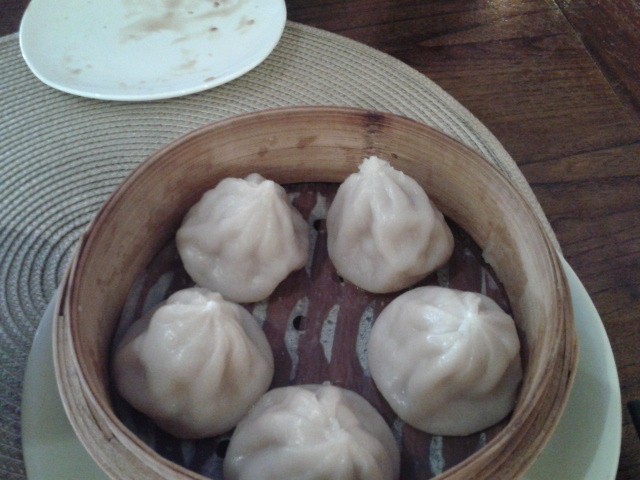 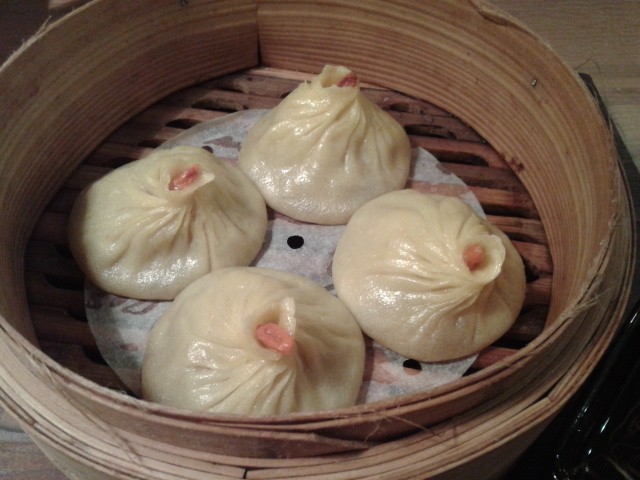 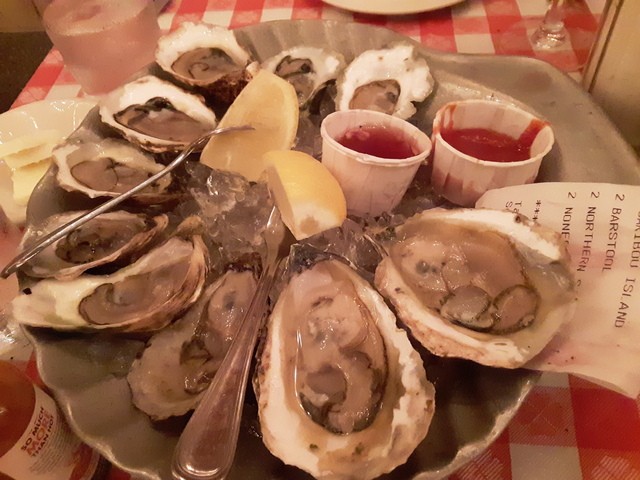 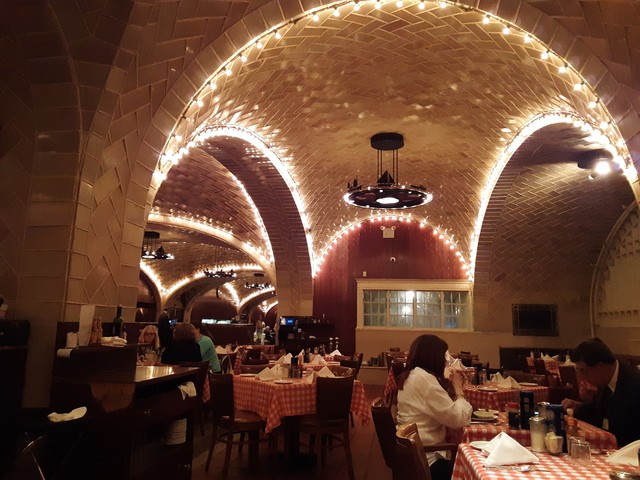