A Violinist Lost His Seat and His Job. He Blames China

A Violinist Lost His Seat and His Job. He Blames China 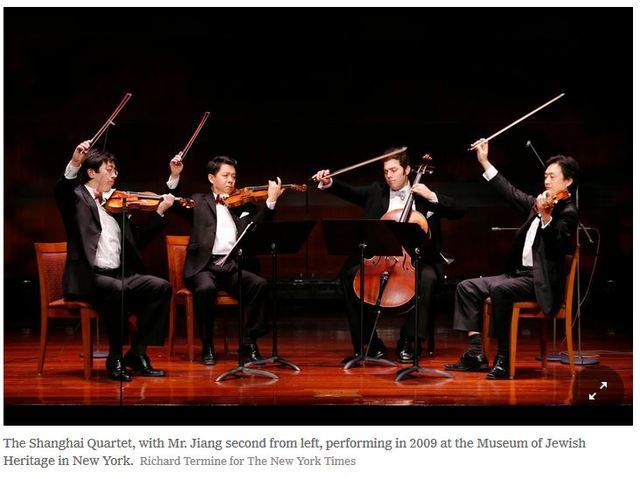 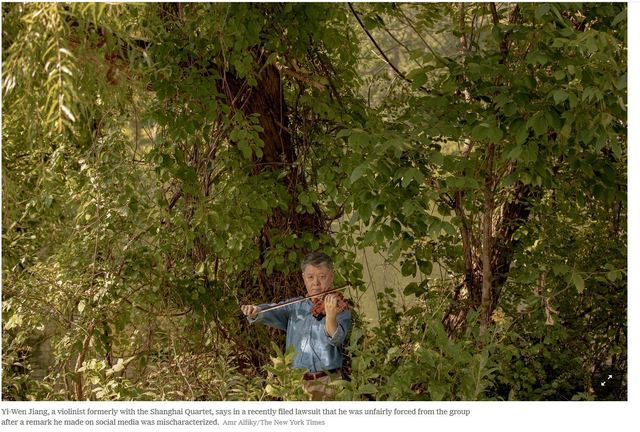 A Violinist Lost His Seat and His Job. He Blames China.

In a lawsuit filed in New Jersey, a former member of the well-known Shanghai Quartet said he had been dumped after a remark he made on social media was misinterpreted as an ethnic slur.

Yi-Wen Jiang, a violinist who was, until recently, billed as a member of the Shanghai Quartet, an internationally known chamber group with roots in China, says he didn’t give the pig emoji a second thought.

Responding to a post on social media about Chinese-American relations a few months ago, he typed in the image of the smiley pig face — “the cute one,” he said — and went about his day. But his posting soon caused an outcry and he was called a bigot for what his critics said was his effort to deride the Chinese people as pigs.

Within days, Mr. Jiang had lost his job and, he said, his reputation.

Now Mr. Jiang, who has been a U.S. citizen for over two decades, has brought a lawsuit in New Jersey Superior Court, contending his offhand remark on social media was purposely distorted by those who object to his longstanding criticism of the Chinese government.

He is suing not only his former partners in the quartet, who his suit says unfairly dumped him once he became a subject of scorn, but also a college in New Jersey, where he lives and where he lost his artist-in-residence post.

According to Mr. Jiang’s lawsuit, and interviews, the dispute started when he commented on March 7 on the Chinese social media app WeChat, replying to a friend who had posted a link to a video about American-Chinese relations. When his friend suggested the video was important viewing, Mr. Jiang said he replied in Mandarin, intending to point out that people within China’s wall — its tech firewall — couldn’t see it.

Only he didn’t write the character for “people.” He used the pig emoji, as in “I’ve heard that the [pig emoji] within the wall can’t see it.”

He intended, he said in a phone interview, to highlight how trapped Chinese citizens are when an oppressive government controls the flow of information.

Within his tight-knit classical music community, Mr. Jiang said he was known as an unabashed critic of the Chinese Communist Party, which, he argues in his lawsuit, seized upon the emoji to cause commotion.

Screenshots of his messages were shared widely in China. In the local news media and on Chinese social networks, Mr. Jiang was accused of racism — the emoji was tantamount to calling Chinese people pigs, according to Chinese media. “Jiang made xenophobic and racist comments against the Chinese people, referring to them as ‘pigs’ when the government and people have been making great efforts to battle the Covid-19 outbreak,” read a story in China Daily.

Within days, the Tianjin Juilliard School in China, the first foreign outpost of the New York performing arts college, announced it was firing him from a faculty post set to start this fall. The other members of the quartet were kept on. Mr. Jiang said he told his quartet colleagues that he had no problem leaving the Tianjin engagement, given the controversy. But, his lawsuit says, the Shanghai Quartet then posted on its website that it had accepted his resignation.

Mr. Jiang said he had never resigned. His lawsuit accuses the other members of working with the Chinese Communist Party in orchestrating “a malicious campaign to defame and destroy” his personal and professional reputation, though it does not detail the basis for that claim.

The quartet denied any effort to work in tandem with the party and said Mr. Jiang had parted from the group voluntarily after issuing a public apology. “Yi-Wen Jiang’s words and actions were reckless, insensitive, and hurtful,” the quartet members said in a statement. “It now comes as a heartbreaking disappointment that he is claiming there was some sort of conspiracy. There was nothing more than his own damaging words and the predictable consequences that followed.”

“The lawsuit is without merit and fanciful,” the group added in another statement. “We are musicians. Enjoying deep musical experiences with our audiences is our priority and focus.”

Mr. Jiang’s suit seeks financial damages from the quartet, which include, it says, his share of a federal stimulus payment it received. The suit also accuses Montclair State University, where the members of the quartet have been artists in residence since 2002, of unlawful termination. Mr. Jiang said the university had rescinded his position and benefits because of the fallout.

A spokesman for Montclair State said that its artist-in-residence roles for the Shanghai Quartet were determined by membership in the group, and that, after learning Mr. Jiang was no longer part of the quartet, it had offered him a job as an adjunct instructor. Mr. Jiang said this is a step down from his previous role there, which included health insurance and other benefits.

The quartet was formed in 1983, by the brothers Weigang Li (violin) and Honggang Li (viola). Mr. Jiang joined in 1994 and Nicholas Tzavaras, the cellist, in 2000. They have released dozens of albums; among the most popular is “ChinaSong,” Mr. Jiang’s arrangements of Chinese folk music for strings.

Kenneth Fitzgerald, a lawyer for Mr. Jiang, said he viewed what happened to his client as being aligned with other efforts by the Chinese government to pressure artists and others to avoid statements that could be perceived as critical. He referred to Daryl Morey, the general manager of the Houston Rockets, who walked back a tweet in support of the pro-democracy protests in Hong Kong after it caused a backlash among N.B.A. sponsors and officials in China. The message, Mr. Fitzgerald said, was clear: “If you choose to do business in China, you better not criticize the Chinese government, even if you do so in the United States as an American citizen.”

The Communist Party’s central propaganda department, which governs media and which is mentioned in Mr. Jiang’s lawsuit as an agent responsible for helping disseminate the false information about him, did not respond to requests for comment. In a statement, Ambassador Huang Ping, the Consul General in New York — who was photographed with the Li brothers at a Shanghai Quartet concert at Carnegie Hall in early March — said that his office “always supports cultural exchange activities and encourages Chinese arts groups to promote friendship between the two peoples through cultural performances. We don’t involve in any internal affairs of cultural troupes.”

Mr. Jiang said in interviews that he had a growing conflict with the Li brothers, who are also American citizens, over their position on the Chinese government, which he characterized as supportive. The Li brothers denied there had been conflicts and said their “relationship has been as close, musician colleagues.”

“We are very proud of the Shanghai Quartet’s bicultural heritage and legacy,” the group added in its statement. “Bridging cultures is of the utmost importance to us and integral to our music-making.”

After his WeChat comments became public, Mr. Jiang said he began receiving threatening messages. “Someone made a video, a TikTok, burning my concert picture,” he said. Others, he said, were more violent. “I was scared,” he said, in his first interview since his messages went viral in March.

He said that, urged on by friends and family — and fearing repercussions for his father, who is 84 and a music teacher in Beijing — he had quickly offered an apology in the Chinese news media.

But after lying low for months, Mr. Jiang said he decided to step forward with his account and his lawsuit in an effort to correct the record and regain his career.

“I just want my livelihood back to where I was,” he said. “I think I can still contribute a lot to the music world.”

What a sad story. One keystroke ends a career. Seems to me he has a case, but good luck getting recompense out of China, while his quartet colleagues are probably not flush with funds even if a court should find them responsible. No winners out of this, except the bullies of the CCP.
Top

Deja vu all over again.
Performers and teachers of western classical music suffered terribly during the Cultural Revolution. Some were killed through purges by the Red Guard, and the more fortunate spent years in prison camps. If you're a reader I recommend the novel 'Do not say we have nothing' by Canadian writer Madeleine Chen which concerns the fortunes of a multi-generational Chinese family, recognized as accomplished teachers and performers of western classical music, against the historical background of the cultural revolution through to Tienanmen Square.
Without taking a lengthy tangent into current events (China is holding two Canadians as political prisoners in retaliation for the arrest of Meng Wangzhou), suffice to say Mr. Jiang is best to move on from an artistic perspective and hire a good lawyer to protect his legacy.
Chinese and western relations are only going to become worse in the coming years.
Top

Just ordered that book on your recommendation, Henry. Thanks for the suggestion!

Oh, and she spells her name Madeleine Thien, just for the record.
Top

maestrob wrote: ↑
Sun Sep 20, 2020 11:30 am
Just ordered that book on your recommendation, Henry. Thanks for the suggestion!

Oh, and she spells her name Madeleine Thien, just for the record.

Okay,thanks for the correction. I'll likely have it straight the next time.
This is a very good book and won a number of awards here in Canada. I think you'll quite enjoy it.
Top
Post Reply
6 posts • Page 1 of 1