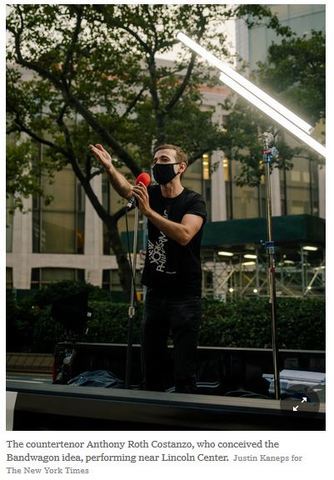 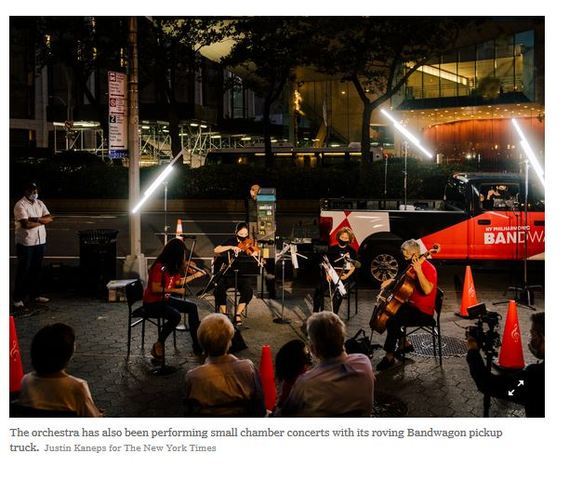 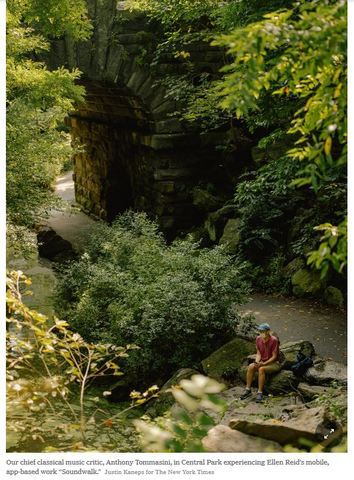 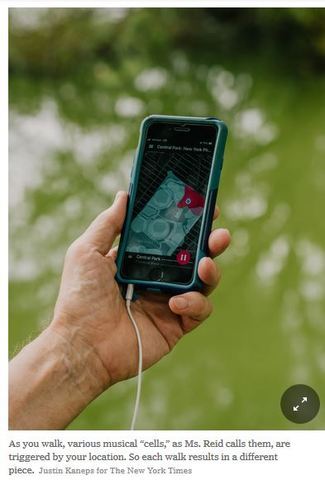 With indoor performances still far-off, the orchestra has organized a “Soundwalk” in Central Park and outdoor pop-up concerts.

A steep set of stairs off a sidewalk plaza at Central Park West and 106th Street leads up to the Great Hill, an expansive patch of grass surrounded by thick woods and winding paths. I live nearby and go there often, especially during these largely homebound days. In truth, only in Manhattan could such a modest hill pass for “great.” Yet those 77 steps offer a dramatic entrance to a secluded space.

That drama was richly enhanced on Friday, when I climbed while listening to “Soundwalk,” an audio experience created by the composer Ellen Reid, with recorded music by members of the New York Philharmonic, the Young People’s Chorus of New York City and the jazz group Poole and the Gang. Available through a free app, “Soundwalk” has been tailored to all 840 acres of Central Park. As you walk, various musical “cells,” as Ms. Reid calls them, are triggered by your location. So each walk results in a different piece.

Some elements of Ms. Reid’s music ended up feeling intriguingly counterintuitive. As I came to a patch of flowers in some woods, I was surprised to hear a scratchy violin and bursts of nervous repeated notes for woodwinds and percussion. At Lasker Pool, which was covered with algae and bustling with birds, a slow three-note horn motif began, a moment evocative of Wagner’s “Das Rheingold.”

And so it continued as I walked through the North Woods area I know well. Coming to a cliff overlooking the Harlem Meer, passages of shimmering sonorities were flecked with delicate harp runs and fidgety woodwinds. Rounding the north tip of the road, the music reached a moment of climactic yet playful exuberance — a mix of surging Romantic crescendos and eerily angelic choral drones — until a jazz combo crept in.

Ms. Reid, whose opera “Prism” won the Pulitzer Prize for Music in 2019, describes herself as a composer and sound artist; “Soundwalk” is clearly more about atmosphere than about structure. Yet it has coherence, character and recurring motifs.

That impression was reinforced later in the day, when I entered Strawberry Fields, off 72nd Street, and heard that three-note “Rheingold”-esque passage again, wafting over familiar-sounding string chords. When I started to move on, some jumpy brass riffs and pleading choral cries of “ah” grew intense, as if the music was affronted that I was daring to leave.


At the Bethesda Fountain, there was another counterintuitive episode, with weighty Bruckner-like sonorities and winding melodic strands. Naturally, the balmy weather brought competition from people making music outside my headphones, including a duo of drums and electric guitar and a man with beefy voice singing (you guessed it) “New York, New York.”


John Cage would say such mingling between the inside and outside of the app was an integral part of “Soundwalk.” I bet Ms. Reid would agree. After all, she folded several surprise Easter eggs into the work: As I neared the Beethoven statue on the Mall, a recording of his “Pastoral” Symphony began.

With the pandemic more or less preventing live indoor performances, this is a moment suited to outdoor sound walks. Another in New York, “Cairns,” written and narrated by Gelsey Bell, with music by Ms. Bell and Joseph White, takes listeners on a peaceable journey through Green-Wood Cemetery in Brooklyn.

But, undeterred, the Philharmonic has also created the Bandwagon, a pickup truck traveling through the city for short outdoor concerts every weekend through Oct. 18. Early Friday evening, after finishing “Soundwalk,” I took in the program at Richard Tucker Square on Broadway, near Lincoln Center. The violinists Qianqian Li and Na Sun, the violist Katherine Greene and the cellist Patrick Jee joined the countertenor Anthony Roth Costanzo, who conceived the series and performed with the string quartet while standing in the bed of the truck.


Each week the Philharmonic announces the names of the players and the programs for the weekend, but not the times and locations, to avoid attracting crowds that would make social distancing difficult. But as the musicians and crew parked the truck and began unloading music stands and sound equipment in Tucker Square, the activity drew a curious, very surprised and ultimately delighted crowd of 50 or so.

Mr. Costanzo, who triumphed in the title role of Philip Glass’s “Akhnaten” at the Metropolitan Opera last fall, which now feels long ago, was in fine voice and made an affable host. Of the six works, three were by composers of color, including one young American. First came a spirited movement from the 18th-century composer Joseph Boulogne’s String Quartet No. 1. In Daniel Bernard Roumain’s “Klap Ur Handz,” a stirring section of his Quartet No. 5 (“Rosa Parks”), the musicians alternately played and clapped, with the audience joining in.


Mr. Costanzo gave an earnest account of “Somewhere” from “West Side Story.” He told the audience that, given it was the anniversary of Sept. 11, Dido’s anguished lament from Purcell’s “Dido and Aeneas” seemed fitting. He sang it exquisitely. Ending with the Gershwins’ “I Got Rhythm” proved poignant at a time when we are all enduring deprivations. “I got rhythm, I got music, I got my man,” Mr. Costanzo sang. “Who could ask for anything more?”

That’s actually a lot to have.