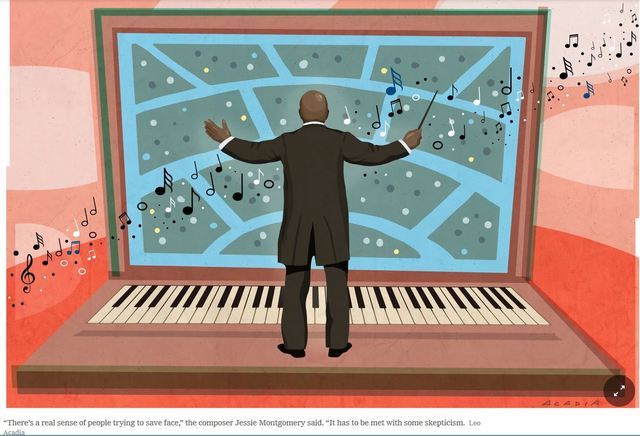 Ensembles shut by the coronavirus pandemic are shaking up their programming. Artists of color are hoping it’s for the long haul.

In June, as millions of Americans filled city streets with Black Lives Matter demonstrations and millions more rushed to share their solidarity online, the composer Jessie Montgomery noticed something unusual.

Orchestras across the country, already in upheaval because of the coronavirus pandemic and in the process of improvising new seasons, were asking to perform her music. A lot of orchestras: By the end of this year, her works will have been programmed more than twice as much as they were in 2019.

“I’m sort of flabbergasted, to be honest with you,” Ms. Montgomery, who is Black, said in an interview. “It’s also happening with my Black colleagues. They’re getting a lot more attention. It’s clearly a response.”

Classical music is not generally known for its swift responsiveness to current events. It is a field in which events are planned well — often years — in advance and the repertoire is overwhelmingly antique, white and male. In past seasons, concerts with works by composers of color tended to be noteworthy merely for existing; but this fall, orchestral programming has made a sudden, drastic leap forward in racial representation.

This isn’t what had been announced earlier in the year, before the pandemic wiped the coming season’s calendar clean. In the United States, many ensembles still aren’t able to perform. Some, however, have replaced their planned seasons with abbreviated ones — spun as “reimagined” — streamed online from empty concert halls.

Now, more than ever before, you’re likely to find music by George Walker, Anthony Davis or Joseph Boulogne, Chevalier de Saint-Georges. Major orchestras like the Los Angeles Philharmonic, Detroit Symphony Orchestra and Seattle Symphony put works by Black composers on their first online programs. The Cincinnati Symphony Orchestra — which opened its season not with “The Star-Spangled Banner” but Ms. Montgomery’s “Banner” — plans to have composers of color represented on every livestream this fall. The New York Philharmonic’s Bandwagon series of pop-up concerts debuted with a premiere by the Black composer Carlos Simon.


All of this amounts to welcome change, but it also raises questions about what has kept orchestras from more representative programming in the past — and whether they are truly committed to long-term transformation.

“There’s a real sense of people trying to save face,” Ms. Montgomery said. “It has to be met with some skepticism. It’s always this concern that I’m being programmed just to fit a mold, like I’m being tokenized.”

Leaders from a few of the orchestras that have made noticeable strides in their programming noted how the pandemic, while devastating to the industry at large, made a substantial reconsideration of their repertoire possible.

“We have this challenge in front of us,” said Deborah Borda, the Philharmonic’s president and chief executive, “but it’s provided some real opportunity.”


Krishna Thiagarajan, who has led the Seattle Symphony since 2018, said that while his orchestra had already been in the process of changing the makeup of its administration and repertoire — “flippantly, that’s what happens if you hire a crazy Indian guy as your C.E.O.” — the current crisis “has shaken up the system.”

And Jonathan Martin, the Cincinnati Symphony’s president, said that as the orchestra was adapting to the pandemic, “there was a moral imperative to be a part of the conversation” about racial injustice, as well.

With the exception of a few premieres, the works by Black composers being presented this fall aren’t new. In fact, their sudden ubiquity proves how simple it is to program them. A skilled orchestra can prepare a Florence Price symphony as easily as one by Beethoven; the only thing keeping Beethoven on the bill is ingrained habit.

What has allowed for the swift evolution this fall? Raff Wilson, the Seattle Symphony’s vice president of artistic planning, pointed to now-absent complications like the schedules of guest artists, saying that “pieces had to be slotted to their repertoire.” Mr. Martin of Cincinnati, however, said that without some catalyst like the Black Lives Matter movement, “organizations like ours don’t change easily or quickly.”

It’s one thing to mix up programming in a unique season; it’s another to take more lasting steps toward racial equity. Over the summer, Black artists spoke out about the lack of representation not just in orchestral repertoire, but also in administration, community engagement and the players onstage.

Performing music by Black composers is the least an orchestra can do. Given the flexibility of the moment, if ensembles don’t continue to diversify the repertoire in coming years, this fall will not have been much better than the platitudes that proliferated on social media in June.

“The first step is opening a dialogue by putting those voices in a position of being represented and showcased,” Ms. Montgomery said. “But it doesn’t really address the issue of overall lack of representation. I’m optimistic, and I’m also skeptical. Who’s going to hold who accountable?”

Mr. Martin said that he and his colleagues in Cincinnati were “nailing our feet to the floor,” aiming to make the spirit of its programming this fall more permanent — and evaluating, for example, whether swaths of its budget could be better spent “in greater service to our community.”

In New York, the trend of the Philharmonic’s fall premieres of works by traditionally underrepresented composers — which so far have also included Anthony Barfield and Ellen Reid — will continue into the spring and beyond, Ms. Borda said. But she emphasized that programming is a fraction of the orchestra’s efforts, adding, “If you don’t place it in a larger philosophical context of an organization, if you isolate it, it becomes empty.”

Ms. Montgomery said that only time would convince her that the message of this fall’s orchestral programming was genuine: “We just have to keep going.”

In the meantime, she said, orchestras should be sensitive to the fact that “the whole industry is asking a lot of Black artists right now.” If ensembles want to support composers and performers of color, programming is one way; commissions and residencies are another.

Some initiatives this year, she added, are more superficial, and taxing on Black artists who worry they are being politicized or reduced to their race. She mentioned virtual Q. and A. sessions that accompany performances, in which “the same questions are asked about how we feel about being Black.”

“It’s important that we have these conversations, but at the end of the day I just want to make music,” she said. “I want to feel as free in my art as any white dude has felt.”

This is good news, but will it last?

There is plenty of worthy music by Black composers to choose from, as there is music by women composers who have also been underrepresented in today's programming.

Now, let's open the door to Black conductors and instrumentalists as well. Singers like Marian Anderson and Leontyne Price paved the way in opera by appearing at the MET, as well as pianist Andre Watts who regularly appeared with Leonard Bernstein in Lincoln Center. Please, let's have more.

Dean Dixon and the very talented James DePriest of the Oregon Symphony who also guest-conducted the Juilliard Symphony during the 1980's in Avery Fisher Hall, as well as Henry Lewis, whom I saw conduct the Los Angeles Philharmonic in 1972, and Paul Freeman, all have paved the way for Black conductors, but were never appointed to a post with a first-rank orchestra, despite their many successful recordings (DePriest built the Oregon Symphony into a major ensemble during his 23-year tenure there.). John McLaughlin Williams, with whom I used to correspond on the now defunct N. Y. Times forum, the only Black conductor to have been nominated for a Grammy Award, is known for his recordings of composer Nicholas Flagello's music for Naxos and other labels, again has not received the attention he deserves.

So, let's get over this, and allow people to contribute to society based on their abilities, not based on who they love, how they worship, or how they look!
Top

I don't think orchestras are "rushing" to do this, but they are making a serious attempt to give more black composers a chance to be heard at concerts, which I think is a good idea .
They've a;sp been making an effort to perform more music by women composers , past and present, which is also admirable . Not to mention Hispanic and Asian composers . Diversity si a good thing .
Top

FYI, next Friday,Oct.16 on BBC Radio 3 ,1400 London time, but will also be archived about 60 days.Per BBC:
"In a concert recorded earlier in Black History Month as part of a socially-distanced Autumn season, the Principal Conductor of the BBC National Orchestra of Wales Ryan Bancroft leads the orchestra in music by Samuel Coleridge-Taylor, James B Wilson, Errollyn Wallen and Florence Price."

James B Wilson: The Green Fuse

Not good that Sony’s reissue of the Black Composers Series 1974-78 published just a year ago is now OOP and nearly unobtainable. Of course, the same thing happened to their George Szell box, but it is easy to get his recordings in other remasterings.
Top

Sony seems to released another run of this set. Amazon.com lists 10 copies available. I bought my copy from ArchivMusic.com, which also reports it in stock.

CharmNewton wrote: ↑
Sat Nov 07, 2020 9:53 pm
Sony seems to released another run of this set. Amazon.com lists 10 copies available. I bought my copy from ArchivMusic.com, which also reports it in stock.

Thanks, John. I've been periodically watching that for that title, and bought two copies the other day: one for me, and one for my Black nephew-in-law for a Christmas present.
Top

I am not very convinced that it will last. I think that some of the earlier generations of Black composers, such as William Grant Still and Florence Price, will be played more frequently, but I am far less optimistic about the prospects of more recent composers, such as the late Olly Wilson, Anthony Davis (even though he just won a Pulitzer Prize), Tania León, Errolyn Wallen, David Sanford, Jeffrey Mumford, Alvin Singleton, and many others. There seems to be a strong tendency to expect Black composers to write in a very folk-derived mode and reject any influences from much, if not most, of 20th-century music. (If you play, for example, William Grant Still's First Symphony to listeners who have never heard of him, the name that would come up 95% of the time would be George Gershwin--a composer of Russian-Jewish origin!) These composers must be judged on their merits and not merely by their ethnicity. I am far from convinced that this will actually happen.
Top
Post Reply
8 posts • Page 1 of 1

Users browsing this forum: No registered users and 72 guests