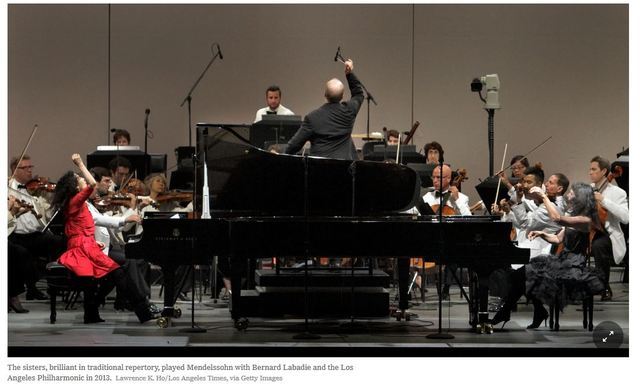 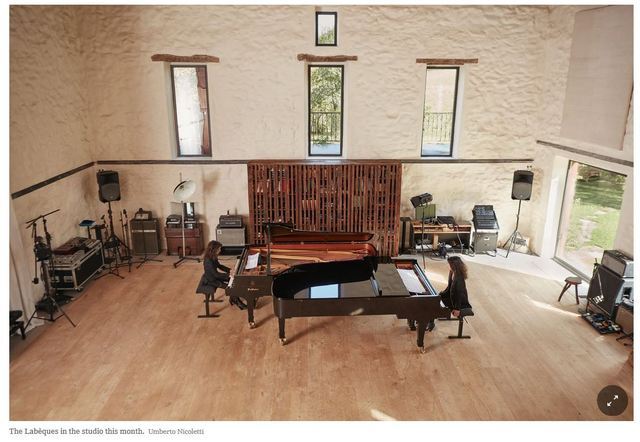 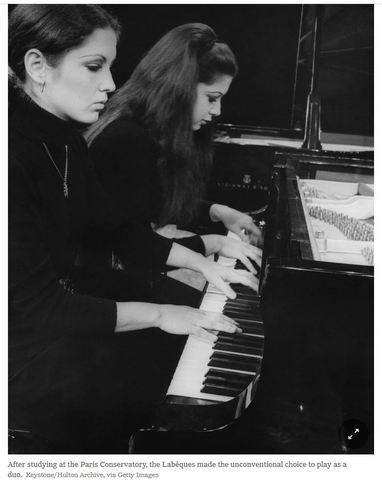 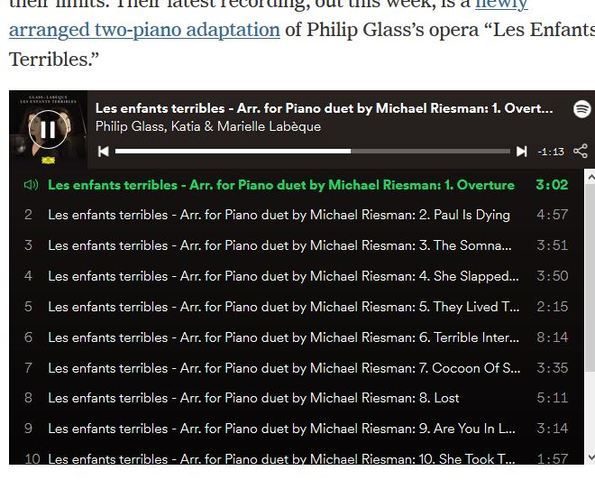 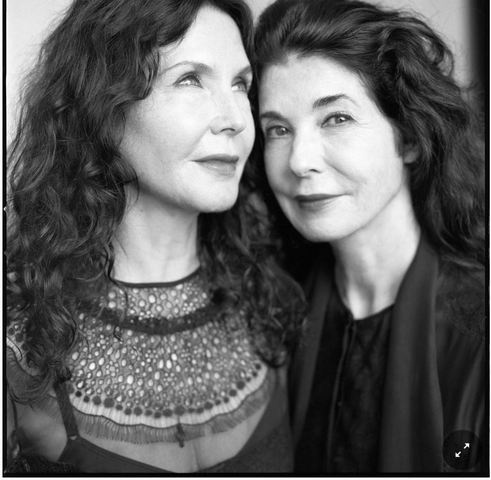 Behind the clothes, which were behind the boiler in the utility room of her home and studio here in French Basque Country, was a poster advertising concerts last year at the Philharmonie in Paris. It showed Katia and her sister, Marielle — both with dark hair flowing, glamorously dressed — and listed three programs: five centuries of Basque music; a Stravinsky and Debussy double bill; an evening with three art-rock auteurs, Thom Yorke, Bryce Dessner and David Chalmin.

“We’re ridiculous,” said Katia. “This is the only poster we have, and it’s hidden.”

The poster suggests the wildly varied musical interests of the Labèque sisters, who for over 50 years have been playing — and enlarging — the two-piano repertory. They have interpreted traditional classical and Romantic works, to brilliant effect, but have also ventured into jazz, Baroque, modernist and experimental genres — commissioning scores, inventing projects and testing their limits. Their latest recording, out this week, is a newly arranged two-piano adaptation of Philip Glass’s opera “Les Enfants Terribles.”

“What always struck me with both of them is that, although they are very different human beings, they both have this endless curiosity about everything, not just music,” said Simon Rattle, the music director of the London Symphony Orchestra and a frequent Labèques collaborator.

Katia, 70, and Marielle, 68, have been inventing themselves since they were teenagers. First taught by their mother, an Italian piano teacher and pupil of the renowned pianist Marguerite Long, the sisters moved at 11 and 13 from their hometown, Hendaye (not far from here), to attend the prestigious Paris Conservatory.

“They taught you the tricks, but not the love of music that we learned from our parents,” Marielle said. “Maybe that helped us develop our sense of independence, the desire to move in the world on our own terms.” (The sisters, interviewed mostly in French, also speak fluent English, Italian and Spanish.)

They decided against the solo careers that their fiercely competitive training had shaped them for. “From the moment we left — and it was 1968, the year of revolution of the students — we said, ‘Let’s do something maybe not so conventional,’” Katia said.

They decided to play together.


“They took a time-honored form, the double piano, which had become slightly less fashionable, and breathed entirely new life into it,” said Deborah Borda, the president and chief executive of the New York Philharmonic.

Despite their almost uncanny unity onstage — “it’s a mystery beyond sisterhood,” Mr. Rattle said — the Labèques have very different personalities. In the interview, Katia exuded energy and enthusiasm, while Marielle remained calm and reflective. But they agreed that they never really had a career plan. After deciding to perform together, they joined the Conservatory’s chamber music graduate class to develop their dual repertory, and worked as ensemble musicians with Félix Blaska’s dance company.

One day, while they were working on Olivier Messiaen’s “Visions de l’Amen,” Messiaen, who taught composition at the Conservatory, knocked on the door. After listening for a bit, he asked if one of the sisters would record the work with his wife. Even then, they showed surprising strength of purpose.

“We said, ‘No, we are just starting out and we can’t begin by dividing,’” Katia recalled. But eventually Messiaen asked them to record the work together, which led to encounters with the composers Gyorgy Ligeti, Pierre Boulez and Luciano Berio, whom they boldly approached, asking him to compose a work for them. Berio suggested they give the French premiere of his double piano concerto, which they subsequently played all over the world.

Their international breakthrough came with a 1980 recording of “Rhapsody in Blue,” which was a best seller but led to some harsh criticism from parts of the classical music establishment.

“The concert halls were closed to Gershwin,” Katia said. “People would say, ‘He is not a serious composer.’ The same thing was true 30 years later, when we started to play Philip Glass.”


They were also sometimes ribbed for their designer outfits and glossy image. But Chad Smith, the chief executive of the Los Angeles Philharmonic, said he loved that the Labèques “have a complete vision. Lighting creates a beautiful environment; clothes, too. They come with a theatrical approach and have shown the false narrative that it’s less serious if you engage in the visual.”

Over the years, they have pursued Baroque music, on Silbermann-model period-style pianofortes made for them and with the ensemble Il Giardino Armonico; ragtime; traditional Basque music; and jazz. Katia once lived with the jazz musician John McLaughlin and played in his band, and counts Miles Davis — who wrote two songs for her — and Billie Holiday as influences. The sisters have plunged deep into experimental terrain in “Minimalist Dream House,” an ongoing series of concerts and recordings with Mr. Chalmin, who is Katia’s partner, and Mr. Dessner.

“They have an extremely broad vision of what they can do in a concert hall, and they treat everyone with the same respect,” said Mr. Dessner, best known as a member of the indie-rock band the National.

The coronavirus pandemic paused a number of their projects. A concerto by Nico Muhly, which should have premiered at the New York Philharmonic in early June, is now scheduled for the Paris Philharmonie on Nov. 12; a program with Mr. Dessner and the soprano Barbara Hannigan will probably be pushed to 2022.

But one thing they could work on in quarantine was “Les Enfants Terribles,” arranged by Mr. Glass’s longtime collaborator, Michael Riesman. During the initial lockdown the Labèques worked separately to prepare the score — Marielle lives with her husband, the conductor Semyon Bychkov, about nine miles from the house Katia and Mr. Chalmin share — but sent recordings back and forth and spoke frequently with Mr. Riesman about changes.

“We wanted more of the story and the dramatic parts,” Katia said. “It was so odd that it’s a story of confinement.” After the lockdown restrictions were relaxed in May, they were able to practice together, and recorded the work in the state-of-the-art studio at Katia’s house.


“I love the way they play Philip Glass,” said Mr. Riesman. “They have the right style, the right approach. They don’t overly dramatize or emote.”

Mr. Muhly said, “They are actually much more involved in everything than most people of their stature. They email you about material; they are totally involved. The rhythms of the day are organized around an unspeakably rigorous work ethic, but there is something really elegant about the way they live their lives which flows into music and food and their extended family of artists.”

The sisters’ trick, according to Katia, is their constant desire to change and learn. “We never want to rely on what we’ve done,” she said. “We have always tried to be relentlessly in the present.”

Re: These Sisters Have Transformed the Piano Duo

Thanks for posting the update to this article, Len! I'll check out the musical excerpts.

Users browsing this forum: No registered users and 77 guests