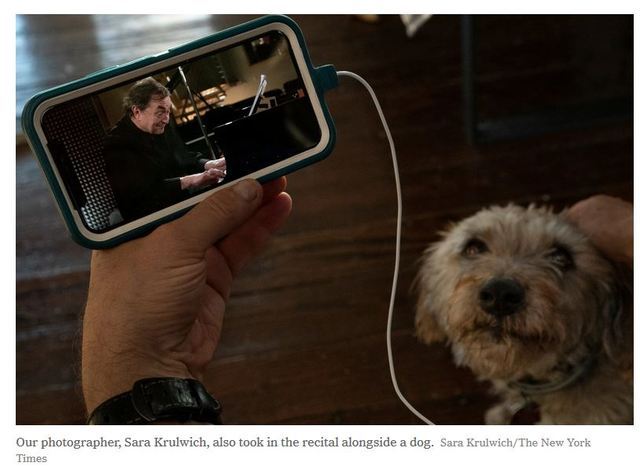 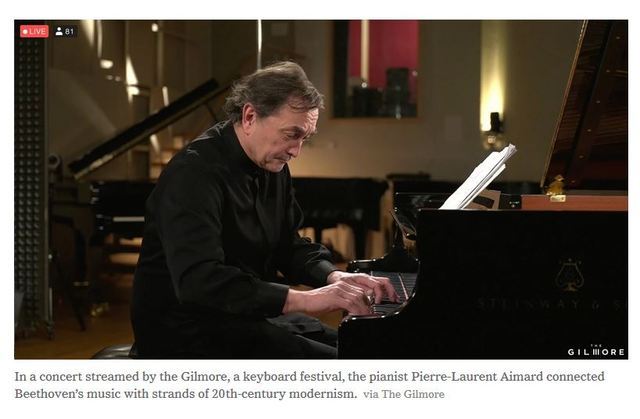 A critic tries to review a streamed concert under the decidedly nonideal conditions of 2020.

Pierre-Laurent Aimard, the French pianist, was staring up at the beautiful blue sky on Tuesday morning and playing the solemn strains of a Beethoven sonata.

Staring up out of my phone, that is. I had put it down flat on a gnarled tree root while I fished out a plastic bag with which to manage my dog’s unmentionables. There have been times in my reviewing career when I felt like I was handling refuse, but never had the sensation been so literal.

The proximity of Mr. Aimard’s lucid, passionate virtuosity to the waste of my toy poodle, Gus, came about because of an experiment. I wanted to try, for the first time since the coronavirus pandemic largely closed down live performing arts worldwide, to review a concert taken in the way I have most music since March: while running in Prospect Park in Brooklyn, ducking into the bodega for milk, walking Gus, living life.

Would earbuds convey a musician’s subtle intentions? Would distractions — honking cars, texts, phone calls — allow me to follow a sustained train of artistic thought? Could a performer and I still enter into the kind of implied dialogue out of which criticism arises?


Yes? Well, sort of. I consumed Mr. Aimard’s recital, which was presented by the Gilmore, an eminent keyboard festival based in Kalamazoo, Mich., as a series of episodes, as fragments rather than a cohesive entity. So much — indeed, almost everything — was lost in terms of my focus. But Mr. Aimard’s overarching agenda, connecting Beethoven’s music, in his 250th birthday year, to strands of 20th-century modernism, came through with clarity, attesting to the strength of his vision and the savvy of his juxtapositions.

I planned to watch the concert as it was streamed live from Berlin on Sunday afternoon, New York time; in characteristically scattered 2020 fashion, I forgot. But it is available until Wednesday, so on Monday evening I set out on a jog toward Prospect Park, glancing down at the screen when I could to see Mr. Aimard grow sweatier over the hourlong program. (Don’t try this at home; I had some close calls with cars making tight turns in the gathering dark.)

The program felt, in these surroundings, appropriately nocturnal, the park’s forested paths a mirror of the moody depths and wary, milky, moonlit glints of Messiaen’s “L’Alouette Lulu” (“The Woodlark”), from his “Catalogue d’Oiseaux” (“Catalog of Birds”). From the beginning, Mr. Aimard’s playing was a study in reverberation; it was perceptible even through slipping headphones how the music expanded in space and time. I only regret that, just as he moved from “L’Alouette Lulu” into the classic, slowly unwinding first bars of Beethoven’s “Moonlight” Sonata, I accidentally turned off my phone.

Despite that unwelcome pause, Mr. Aimard’s point was clear: Messiaen’s forlorn yet slyly confident sounds were Beethoven’s, too. The transitions were crucial in this presentation; I think that by paying close attention to those, I experienced much of what Mr. Aimard wanted me to, even if I lost other aspects of the performance while trying to keep a halfway decent running pace.


The roiling, abrupt ending of the “Moonlight” led, without pause, to the dark, wet sounds — like the autumn leaves I was crushing underfoot — of another section from Messiaen’s “Oiseaux,” “La Chouette Hulotte” (“The Tawny Owl”). The ferocious ending of Beethoven’s “Appassionata” Sonata was immediately followed by the similarly pounding opening chords of Stockhausen’s “Klavierstück IX.”

I had saved the “Appassionata” and “Klavierstück” for Tuesday morning; what might have been weighty the night before now seemed, as I strolled with the dog, practically sunny — the Beethoven coming across as an attempt to rise above darkness, rather than succumb to it. (It was at the noble beginning of the second movement that Gus decided he needed to go: a collision of the sacred and the profane on President Street.)

The Stockhausen is best known for that relentless beginning, but I was more struck in Mr. Aimard’s performance — and on this particular walk — by the sensual, dawnlike curlicues near the end. When he finished, this superb pianist bowed to the empty studio and walked offscreen, his footfalls echoing as his tones had. I didn’t hear him under ideal conditions, but so little is ideal these days. I heard him, is what matters, and he was very, very good.

Re: Listening to Beethoven, While Walking the Dog and Dodging Cars

Music will happen under even the most extreme of difficulties. That's been proven by history.

For those of us in the arts, it's like breathing: we cannot stop because we simply cannot live without.

Even Anna Netrebko caught Covid-19 while singing at the Bolshoi. There's no stopping us!
Top
Post Reply
2 posts • Page 1 of 1

Users browsing this forum: No registered users and 54 guests