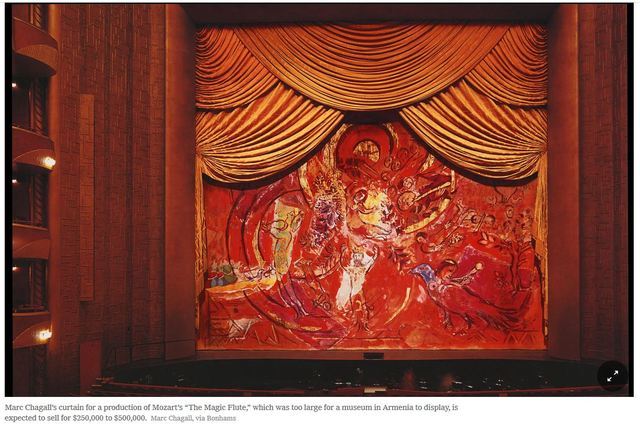 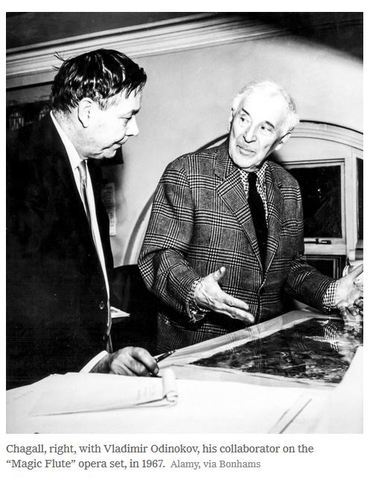 A 65-foot-tall stage curtain that the artist created for the Metropolitan Opera in the 1960s will go up for auction Tuesday at Bonhams.
Marc Chagall’s curtain for a production of Mozart’s “The Magic Flute,” which was too large for a museum in Armenia to display, is expected to sell for $250,000 to $500,000.

The object in question is a stage curtain — a riot of figures on a fiery red background not quite 44 feet wide — that Marc Chagall created for a Metropolitan Opera production of Mozart’s “Die Zauberflöte” (“The Magic Flute”) in the 1960s, at about the same time he designed the famous murals that flank the Met’s lobby at Lincoln Center. The curtain is to be auctioned on Tuesday in New York by Bonhams, which estimates that it will sell for $250,000 to $500,000.

The curtain’s gigantic size is why it is being sold. It was too big for the spot where the most recent owner wanted to hang it, in a museum in Armenia, a lofty pyramid with artificial waterfalls that is almost as tall as the Empire State Building. And so it was folded, put back in its custom-made crate and returned to New York.

“It does take a special space,” said Molly Ott Ambler, a senior vice president of Bonhams. “It’s a unique object to consider.”

But unlike auctions where the item being sold — a painting or a diamond or a tiny stamp — is carried to the podium before the bidding begins, the curtain will remain in its crate on Tuesday. It is so large that Bonhams had to rent a studio about half the size of a football field just to photograph it.

“It’s such a quintessentially Chagall image, with multiple figures and a swirling fantasy flying through the air,” Ms. Ott Ambler said, noting that Chagall used more gold and silver pigment on the curtain’s linen fabric than on the sets for ballets that he had designed when he was younger. “He’s really good at incorporating geometric shapes, at giving the sun and moon a vibrating quality. He’s able to create these dynamic relationships between the sections of the curtain that tell the story.”

The Met sold the curtain, seen in the final act of the production, in 2007, two years before it put up the murals in the lobby as collateral for a loan in the wake of the financial crisis.

The curtain, executed in collaboration with the Russian stage designer Volodia Odinokov, was part of the only opera set that Chagall designed. Artists have long expanded their portfolios by collaborating with choreographers and directors. Perhaps the most famous such partnership was Salvador Dalí’s backdrop for Alfred Hitchcock’s thriller “Spellbound” in 1945. Artists like Eugene Berman and John Piper designed opera sets — Berman did five for the Met from 1951 to 1963 — and Maurice Sendak’s rough sketches and polished designs for operas and ballets were the subject of an exhibition at the Morgan Library & Museum last year. The sculptor Henry Moore designed a staging of “Don Giovanni” by Mozart in 1967 that included abstract shapes made of foam rubber. And Julie Taymor, the Tony Award-winning director of “The Lion King,” designed a new “Magic Flute” for the Met in 2004 to replace one designed by the painter David Hockney.

Chagall had created inventive settings for ballets in the 1940s but did not venture into opera until Sir Rudolf Bing, the director of the Met, persuaded him to work on a new production of Mozart’s last opera, a fantasy about a prince assigned to rescue the abducted daughter of the Queen of the Night.

Bing, who was friendly with Chagall, had tried to get him to design a production for a ballet in the 1950s. Chagall said no to that project and to Verdi’s “Nabucco,” which was scheduled for the 1960 season. But he could not say no to “The Magic Flute.” It was a favorite. “There is nothing on earth that approaches those two perfections, ‘The Magic Flute’ and the Bible,” he once declared.

Chagall, then in his 70s, had just unveiled a new painted ceiling at the Paris Opera, actually a set of panels that were placed over the original circular painting by Jules Eugène Lenepveu. Chagall created a swirl of figures and symbols that paid tribute to Bizet’s “Carmen,” Wagner’s “Tristan und Isolde” and Mussorgsky’s “Boris Godunov,” among others — and “The Magic Flute.”

And then he plunged into the new Met production. His granddaughter Bella Meyer described the curtain as “a whole celebration” of the composer. “It was an extraordinary adventure for him to be able to go into the world of Mozart and to be able to bring it onto the stage,” she said in an interview.

“The Magic Flute” was planned for the Met’s first season at Lincoln Center. Chagall “drew and painted sketches from morning to night,” Bing wrote in his memoir, “A Knight at the Opera” (1981), and met with Günther Rennert, the production’s director.

Not everyone was enthusiastic about the outcome. John Canaday, The New York Times’s art critic at the time, said that Chagall “seems to have thought of the assignment a little too much as a one-man show,” while Harold C. Schonberg, The Times’s chief music critic, complained that the opening-night audience was not listening to the arias but “busy trying to count the number of figures in the backdrop.”

Still, the Chagall-designed “Magic Flute” remained in the Met’s repertoire for 24 years. Even after the production was retired, the sets were brought out from time to time for black-tie dinner-dances for Met patrons.

And then the Met sold the curtain to Gerard L. Cafesjian, a collector who had made a fortune from his stake in a Midwestern publishing house. Ms. Ott Ambler said that Mr. Cafesjian, who died in 2013, “loved works of great color and powerful impact.” (His estate now owns the curtain.) He was also passionate about his Armenian heritage and reportedly gave more than $50 million for the museum in the Armenian capital of Yerevan.

“I think he saw this as a potentially strong centerpiece” for the museum, she said of the curtain. “I think he found it to be a compelling celebration of life and the images you think of with Chagall, the large blue bird in the foreground or the symbols of music that Chagall portrayed again and again. Chagall was always looking for joy, and music was a major part of that.”

Users browsing this forum: No registered users and 75 guests