What a spectacle of a production-the music really amazed me-the plot surprised me-we saw this via Netflix in the comfort of our home with english captions-the amount of people on the stage and the costumes made this a production to be seen! Regards, Len

Netlix describes it this way: Nina Ananiashvili dances the dual roles of Mlada and Cleopatra in this acclaimed production of composer Nikolai Rimsky-Korsakov's "Mlada," directed by Boris Pokrovsky and choreographed by Andrei Petrov. Voislava, the daughter of a scheming prince, is forced to present his rival's bride with a poisoned ring so Voislava can marry him instead -- and her father can take over his kingdom. Will she get her just desserts when the gods intervene?

Here are 2 reviews that liked it:

1. A genuine and enjoyable rarity which shows clearly the strengths of both Rimsky Korsakov and of Russian production standards in the 1980s. The story, of a murdered princess (a ballet role), who 'rescues' her former fiance from the machinations of a lustful rival (her murder, who has sold her soul to the goddess of Evil), is typically Russian pseudo-mythological, somewhat silly and perfunctory, with echoes of Swan Lake, Ondine and the two Rusalkas (Dargomyzhsky and Dvorak), etc... Rimsky's music is grand and colorful, but a bit predictable. His best moments are the choral invokations of the gods. Like Rusalka, the story suffers from the muteness of Mlada. Singing and orchestral playing are outstanding, sets and costumes vary from interesting to moderately embarassing (the sculpture doubles of the main characters work fairly well). Choreography is surprisingly weak (though it pobably looked better in the theater). The main weakness is the video production, which feels like the work of an advertizing producer. It is distracting and wrongheaded, with lots of cross-cutting and excessive closeups (especially during dances), it seems always to be looking in the wrong place. Overall, worthwhile for fans of Rimsky, but a missed opportunity. If the original raw footage survives, someone should try to reedit it intelligently.


2.This is one of Rimsky-Korsakov's hybrid opera+ballet works, which is why it is rarely performed - you need both a whole opera and a whole ballet company. RK's opera style is not emotionally intense like Italian opera, but it grows on you. The music is spectacular, rich, and varied - I had no idea RK had done this! The ballet is not impressive (although I'm relatively a newbie), but if you're a fan of Ananiashvili, it's a must-see.

A wonderful theatrical experience, I'm sure, but clumsily translated to the TV screen by a director with an overly intrusive idea of how to do these things. Too often, we watch a non-singing cast member standing there with some weird look on their face, and we try to figure out what's up. And since there are elements of Eurotrash (defined as messing with the original creator's obvious intent) in the production, it's possible that the producer of the show also couldn't leave well enough alone. Quite the confused result, but if you're a music lover you may have fun hearing certain passages that sound like early Stravinsky (Rimsky-Korsakov's student). A viable option then: Get the CD of the music and just listen to it -- it's out of this world.

Here's the NYTimes weighing in on what came to NYC.

To its enormous credit, the Bolshoi Opera chose boldness over mere middlebrow prudence. After Tchaikovsky's "Yevgeny Onegin" last week, the company could have continued along the same safe path with, say, "Boris Godunov" and "The Queen of Spades." Instead, on Friday night at the Metropolitan Opera House, it offered a real rarity, Rimsky-Korsakov's opera-ballet "Mlada," to be followed on Wednesday by Tchaikovsky's almost equally rare "Maid of Orleans."

Such repertory, along with younger singers less known in the West than some older Bolshoi standbys, represents a deliberate choice by the Moscow company's current leadership, in place since 1988: Aleksandr Lazarev, the artistic director and chief conductor; Boris Pokrovsky, stage director, and Valery Levental, designer. They want to rediscover lost Russian masterpieces, enliven stodgy production styles and showcase young talent.

All noble aims, but, lamentably, noble aims don't automatically translate into artistic success. Like the other two stagings presented here, this "Mlada" is a direct product of the leading troika, even though on Friday Mr. Lazarev was still fulfilling a prior commitment in Duisburg, Germany, of all unlikely places. First seen in Moscow in 1988 and presented, to acclaim, in Glasgow last summer, the production seemed a muddled failure, colorful, refreshingly unliteral but profoundly confused. If the Russians don't take their own exotica seriously, they can hardly expect Westerners to do so.

Rimsky himself called his score "cold -- like ice." On Friday it seemed more lukewarm -- like mush. The whole enterprise, score and production both, with clumsily juxtaposed elements and fussy distancing devices -- along with the inexplicable absence of supertitles, which will be used in the Bolshoi performances at Wolf Trap near Washington next week -- diluted the vibrant aspects of the piece, canceling them out in confusion.

"Mlada" has a history almost as curious as the work itself. It was originally intended, in 1872, as a collaborative venture by Rimsky, Mussorgsky, Cui and Borodin. But except for Cui's first act, their score was never completed, and the project was abandoned. Rimsky, inspired by the mythic power of Wagner's "Ring," which he saw in 1889, revised the libretto and composed the whole thing for St. Petersburg in 1892.

His opera-ballet is part sheer spectacle, but even more a serious, if inconsistent, effort to create a mythic, mystical Slavic folk opera on the model of "The Ring." A ninth-century Slavic prince's bride, Mlada, has been poisoned by a jealous rival, Voislava, whose father wishes her to marry the prince for dynastic reasons. Voislava enlists the underworld to seduce the prince, but Mlada's shade (a ballet dancer) draws him away to the spirit world. There the forces of good and evil fight for his soul, conjuring up beguiling visions. Finally he sees the truth and kills Voislava; the old realm is submerged, and a new world beckons the reunited lovers.

Less for its music than for its apocalyptic ending, "Mlada" has been called the missing link between "Gotterdammerung" and "The Firebird." Unfortunately, Rimsky had neither Wagner's genius nor his student Stravinsky's, although, to be fair to his reputation, he did compose far better operas than this -- more evocative, more consistent and coherent, more characterized than the stick figures who populate "Mlada."

But the big problem on Friday was that Mr. Pokrovsky and Mr. Levental seemed determined to push the action beyond "The Firebird" into the vaudevillian arena of Prokofiev's "Love for Three Oranges." Yaromir, the prince, looked more like a Petrushka puppet than a noble hero, and the entrance of the nobles in Act II had more slapstick than grandeur.

Worse, the producers couldn't bring themselves to take this tale on Rimsky's terms. They have fallen back on that hoariest of distancing devices, the play within a play, in which the Slavic tribesmen are now supposed to be enacting an old legend rather than simply living it. The stage teems with dolls and doubles: sometimes characters are represented by singers, dancers, child alter egos, stiff cutout figures and rag dolls. With, supposedly, some 300 performers, playing on several levels, and lighting that confuses more than it clarifies, it's all hopelessly cluttered.
Editors’ Picks
When the White House Was Full of Claws, Scales, Stripes and Tails
‘It Was Hard Not to Eavesdrop on the Two Men at the Next Table’
We Are Still Living the Legacy of World War II
Continue reading the main story

A powerful performance might have reduced such objections to reservations, but the company failed to muster one on Friday. The ballerina Nina Ananiashvili contributed a winsome figure and some flowing arabesques, but Andrei Petrov's choreography seemed unformed for Mlada's shade and stereotypically hootchy-kootchy for a vision of Cleopatra.

Re: Our first Mlada

Sounds fascinating, Len, but the DVD is rare now and expensive, so I'll have to pass for now. I've enjoyed the orchestral suite that is offered on Neeme Jarvi's debut 3CD box since it was issued in 1984 or shortly thereafter: 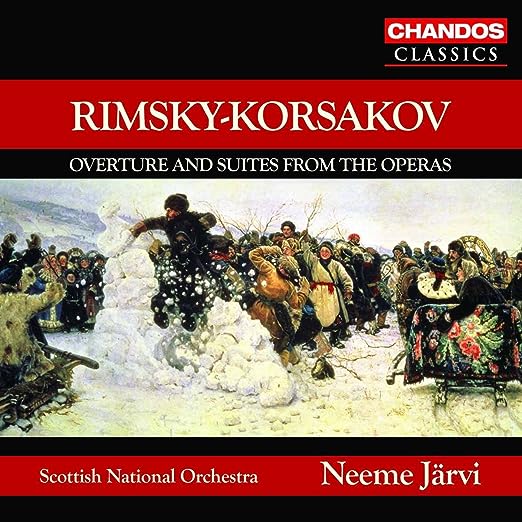 Re: Our first Mlada