I came upon this article in the NYTimes yesterday-Sue and I rely so heavily on public transit-when if ever will we feel we can use it again-very depressing. Regards, Len 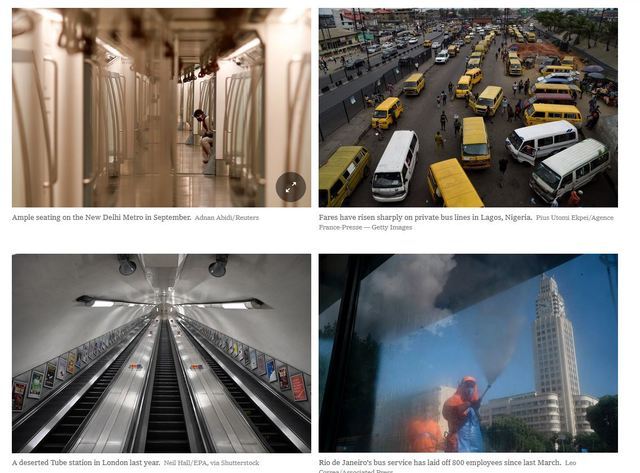 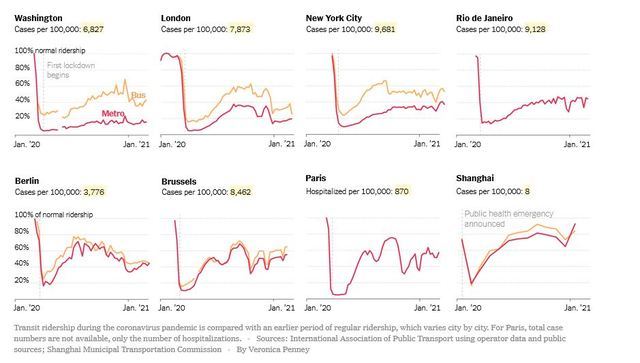 Riders Are Abandoning Buses and Trains. That’s a Problem for Climate Change.

Public transit offers a simple way for cities to lower greenhouse gas emissions, but the pandemic has pushed ridership, and revenue, off a cliff in many big systems.


Transit ridership during the coronavirus pandemic is compared with an earlier period of regular ridership, which varies city by city. For Paris, total case numbers are not available, only the number of hospitalizations.

On the London Underground, Piccadilly Circus station is nearly vacant on a weekday morning, while the Delhi Metro is ferrying fewer than half of the riders it used to. In Rio, unpaid bus drivers have gone on strike. New York City subway traffic is just a third of what it was before the pandemic.

A year into the coronavirus pandemic, public transit is hanging by a thread in many cities around the world. Riders remain at home or they remain fearful of boarding buses and trains. And without their fares, public transit revenues have fallen off a cliff. In some places service has been cut, fares have gone up and transit workers are facing the prospect of layoffs.

That’s a disaster for the world’s ability to address that other global crisis: climate change. Public transit offers a relatively simple way for cities to lower their greenhouse gas emissions, not to mention a way to improve air quality, noise and congestion in the world’s busiest cities.
Climate Fwd: A new administration, an ongoing climate emergency — and a ton of news. Our newsletter will help you stay on top of it.

“We are facing maybe the most important crisis in the public transit sector in different parts of the world,” said Sérgio Avelleda, the director of urban mobility for the World Resources Institute and a former transport secretary for São Paulo, Brazil. “It’s urgent to act.”

But act how? Transit agencies that have been bailed out by the government are wondering how long the generosity will last, and almost everywhere, transportation experts are scrambling to figure out how to better adapt public transit to the needs of riders as cities begin to emerge from the pandemic.

There are a few outliers. In Shanghai, for example, public transit numbers took a nosedive in February 2020, but riders have returned as new coronavirus infections remain low and the economy rebounds.

But the picture is grim in many more cities.

On the Paris Métro, ridership was just over half of normal in the first two months of this year. Île-de-France Mobilités, the transport agency for the greater Paris area, said it lost 2.6 billion euros, or over $3 billion, last year. The agency is projecting a shortfall of an additional billion euros this year.


In Amsterdam, ridership numbers on the city’s trams and buses are around a third of normal, and the transit agency’s website counsels people to “only travel when absolutely necessary.” In Rome, Metro ridership remains below half of prepandemic levels.


One of the busiest metro systems in the world, the London Underground, which normally clocks around four million journeys every weekday, is currently operating at around 20 percent of its normal capacity. Buses are a bit more populated, running around 40 percent of normal. The city transit agency, which had once projected a budget surplus for 2020, has instead been relying on government bailouts since the pandemic hit. It expects it will take at least two years to see public transit usage return to prepandemic levels.

“It’s been pretty devastating, to be perfectly honest,” said Alex Williams, director of city planning for Transport for London. “One of our concerns are substantial declines in public transport and higher levels of car use.”

London is one of a handful of cities around the world with a congestion tax designed to reduce car traffic in the city center. Both London and Paris sought to use lockdowns to expand bike lanes.

In the Indian capital, New Delhi, the subway reopened last September after a suspension of many months. Ridership in February 2021 hovered under 2.6 million, compared with more than 5.7 million for the same month the year before, and bus traffic stood at just over half of prepandemic levels.

Lucky are those agencies, as in India and across Europe, that are subsidized by their governments. There’s even more distress in cities where people rely in large part on private bus companies.

In Lagos, Nigeria, fares have doubled on private bus lines for rides longer than a kilometer, or a bit more than half a mile.

In Rio de Janeiro, a once-celebrated bus network is in a shambles. The private company that runs the system has cut over a third of its fleet and laid off 800 employees as the number of passengers has shrunk by half since last March, according to the city transportation department. Strikes by bus drivers have made bus travel even slower and more chaotic.

“I have never seen anything like it,” said José Carlos Sacramento, 68, a leader of a bus workers union in Rio, who has been working in public transportation for five decades. “I think it might never go back to normal.”

City officials said they hope to use the crisis as an opportunity to revamp the system, including by persuading the private bus companies to be more transparent about their operations in exchange for possible financial help from the government.

After all, said Maína Celidonio, the head of the city transportation department, a clean, efficient bus system is critical for Rio to not only reduce its carbon emissions but also to clean its air. “It’s not just an environmental issue, but a public health issue,” Ms. Celidonio said.

The bigger challenge for all cities is to fix their public transit systems now so that passengers will return, said Mohamed Mezghani, head of the International Association of Public Transport. They could adjust peak hour service as telecommuting from home becomes more commonplace, expand bus only lanes that make commutes more efficient and comfortable or improve ventilation systems to ensure citizens that riding public transit is safe.

“Those cities that were investing, they will get out stronger,” Mr. Mezghani said. “People will feel more comfortable traveling in a new modern public transit system. It’s about perception in the end.”

Re: Trying To Assess What This Will Mean For Me and NYC Opera Going

I saw that article yesterday as well, and one thing that gave me hope is that the current pandemic relief bill contains enough financing that public transit won't have to raise fares or cut back services at least until ridership after we have all been vaccinated can be assessed.

I am concerned that many office workers may not return to the city, which would have negative effects, but that's offset by the craving that many people have to socialize at an office. I believe that real estate prices will become more reasonable as many companies switch to remote work: it's cheaper both for the employee and for the employer as well.

I'm sure, though, that ridership will increase, but nobody can predict by how much yet.

I'll bet it'll be easier to get a seat on the bus, though!

Re: Trying To Assess What This Will Mean For Me and NYC Opera Going

maestrob wrote: ↑
Fri Mar 26, 2021 8:10 am
the current pandemic relief bill contains enough financing that public transit won't have to raise fares or cut back services at least until ridership after we have all been vaccinated can be assessed.

Brian thanks-that will be great for me-I have a lot of money left on my senior metrocard! Regards, Len