A rainy soggy day-we decided to use the Met's On Demand for The Nose-we had seen it live but to be honest I think we got more out of it sitting at home using the big TV-an incredible Kentridge production and Szot was just outstanding-funny we had recently seen him via Netflix in Weil's Street Scene. A very large cast and they sure knew how to bring it off! Regards, Len

Scene 1 THE SHOP OF THE BARBER YAKOVLEVICH
Ivan Yakovlevich...........Vladimir Ognovenko

The Nose is a co-production of the Metropolitan Opera, the Festival d'Aix-en-Provence, and the Opéra National de Lyon, France.
Top

A really fun opera. I loved the joint Royal Opera House-Opera Australia production by Barrie Koskie.
Have a look at the noses' tap dance -3.5 minutes

I would love to see this--maybe I should sign up for this service. Unfortunately, there is no chance of this work being staged in San Diego (they won't even perform Richard Strauss's Salome or Electra). Maybe they might perform it in Los Angeles. (I love Kentridge's art.)
Top

Modernistfan wrote: ↑
Sun Mar 28, 2021 7:50 pm
I would love to see this--maybe I should sign up for this service. Unfortunately, there is no chance of this work being staged in San Diego (they won't even perform Richard Strauss's Salome or Electra). Maybe they might perform it in Los Angeles. (I love Kentridge's art.)

His Met Lulu was brilliant.
Top

Barney I did-where's the music-so far what I've seen of Kosky doesn't impress me. I was at his Magic Flute for Lincoln Center’s Mostly Mozart Festival when it presented a staging inspired by animated film and the style of Weimar Berlin-so far for me he tampers too much with what I want from my operas. Regards, Len

Tommasini saw it differently-to each his own. Regards, Len

For all its familiarity, Mozart’s “The Magic Flute” has always been a tough opera for directors to crack. It’s not just a fairy tale, but also a poignant love story, a farcical comedy, a magic show, and an affecting portrait of a spiritual journey — all at once.

How do you balance these elements? The director Barrie Kosky’s answer is to not even try. Instead, in the production he created with the director and writer Suzanne Andrade and the animator Paul Barritt for the Komische Oper in Berlin in 2012, he embraced the work’s myriad styles and contradictions, its messy mix of fantasy, profundity and silliness.

This well-traveled production had its New York premiere on Wednesday at the David H. Koch Theater, presented by the Mostly Mozart Festival. It features winning singers — the five main roles are double-cast for the four-performance run, through Saturday — members of the Komische Oper chorus and the Tölz Boys’ Choir of Munich. The conductor Louis Langrée draws a lithe, articulate and elegant performance from the Mostly Mozart Festival Orchestra.

Though the production celebrates the opera’s variety, it does have a unified stylistic milieu: Berlin in the 1920s. Indeed, Ms. Andrade and Mr. Barritt call their production company 1927, in homage to that rich period for cabaret, music hall and silent film. I had reservations about the busy animated images, which sometimes overwhelm the singers. Still, the sheer inventiveness of the staging, its fantastical mix of animation and live action, is hard to resist.

What the audience is in for comes through in the opening scene, a tour de force. The set is essentially a rectangular wall, like a film screen, through which characters often pop out when a high or low door opens and a rotating platform swirls around.
Sign up for the Louder Newsletter: Stay on top of the latest in pop and jazz with reviews, interviews, podcasts and more from The New York Times music critics.

We see the prince Tamino (the stirring lyric tenor Julien Behr), a handsome young man in a trim black suit and slightly surreal pasty-white makeup. He is running frantically, fleeing a monstrous serpent. With his upper body, Mr. Behr pumps his arms and looks breathless. But his impossibly fast-moving legs are depicted by an animated film projected on the wall he’s standing behind, an image right out of silent-movie slapstick.

As he runs, we see him passing past animated bushes, trees and hills, all the while encircled by the reddish serpent, its mouth agape. When the Three Ladies come to his rescue, they look like habitués of a Berlin cafe, with fur-trimmed coats, stylish hats and cigarette holders.


Mozart’s opera is a singspiel, with stretches of spoken dialogue — not unlike a classic musical. So it’s often awkward to present the work as written to non-German audiences; the dialogue just doesn’t come off as direct and understandable.

This production has an inspired solution. As in a silent film, the characters’ words go unspoken but are projected as intertitles in English on a black screen, while music from two moody Mozart keyboard pieces (the fantasies in D minor and C minor) is played, by Frank Schulte, on fortepiano. It’s touching yet ominous when poor Tamino wakes up looking lost and lonely, and asks — or so the intertitle says — “Where am I?” as Mozart’s mysterious music plays.

The production keeps on boldly mixing madcap animated film with a deep dive into the opera’s philosophical issues. The bird catcher Papageno (the hearty baritone Rodion Pogossov, in an endearing performance) has the look of Buster Keaton, with a floppy cap and a frumpy forest-green suit. Pamina, with whom Tamino falls in love, is here a Louise Brooks lookalike (the radiant soprano Maureen McKay, in a standout performance).


Her mother, the Queen of the Night (the brilliant soprano Audrey Luna, renowned for her effortless stratospheric high notes), who sings from a platform high up on the wall, is portrayed as a terrifying spider-like creature with tentacles that can ensnare anyone. Why doesn’t the lovely Pamina look like her mother? The production invites you to put aside such questions and go with the metaphorical imagery. Besides, you can imagine this Queen actually manipulating a contraption of her own design.

Sarastro (the solid bass Dimitry Ivashchenko) is a somewhat stiff, bearded gentleman in a top hat who looks like a member of a Berlin scientific society. Along with truth, work and art, science is at the forefront of the brotherhood he heads. Whenever we are taken inside the Temple of Wisdom, a menagerie of mechanical animals strides by, including lightning bugs with propeller hats, who provide lanterns to guide visitors through their admission trials.

The production turns Monostatos (Johannes Dunz) — Sarastro’s slave, described as a Moor in the libretto — into a Nosferatu echo, which softens the tinge of racism toward the character in the libretto. But the directors do not mask the sexism of the story. The Speaker, who greets Tamino when he arrives at the temple, still admonishes him for his romantic folly. “Women do little but talk a lot,” he says.

On the other hand, Mozart’s opera does show Tamino needing Pamina as they undergo the trials of fire and water together. In this production the fire monster is a huge, menacing mechanical creature, easily disarmed by the sounds of the magic flute and the power of young love.

Barney we saw that one live at the Met too and his production was very nice-fortunately it too is available at the Met's On Demand site-video and audio both! Regards, Len 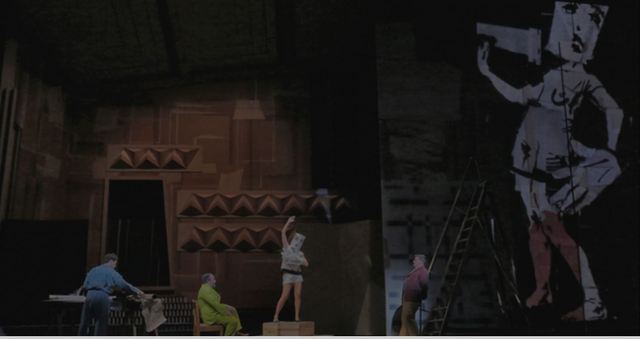 Yes, the soprano was amazing in that Lulu.
Re the Nose, the tap dance is Kosky's addition. I agreed with you about the Magic Flute, but the Nose is an opera in which one can indulge oneself a bit more - as Gogol did. Kosky is very hit and miss for me because, like you, I am a traditionalist who sees no need to "update", but when he's hot he's very hot. And I thought he was in this production.
Top

barney wrote: ↑
Mon Mar 29, 2021 4:54 pm
Yes, the soprano was amazing in that Lulu.
Re the Nose, the tap dance is Kosky's addition. I agreed with you about the Magic Flute, but the Nose is an opera in which one can indulge oneself a bit more - as Gogol did. Kosky is very hit and miss for me because, like you, I am a traditionalist who sees no need to "update", but when he's hot he's very hot. And I thought he was in this production.

Barney haven't seen it but I'm concerned about interrupting the flow of the music just to do a tap dance-still I haven't seen it so I can't judge the whole work. It seemed most people liked his Magic flute but not us. Regards, Len
Top
Post Reply
8 posts • Page 1 of 1