"was overseen by Alexander Acosta"


"Attorney General William P. Barr said on Monday during a trip to South Carolina that he had recused himself from the case because Mr. Barr’s former law firm, Kirkland & Ellis, had represented Mr. Epstein. " 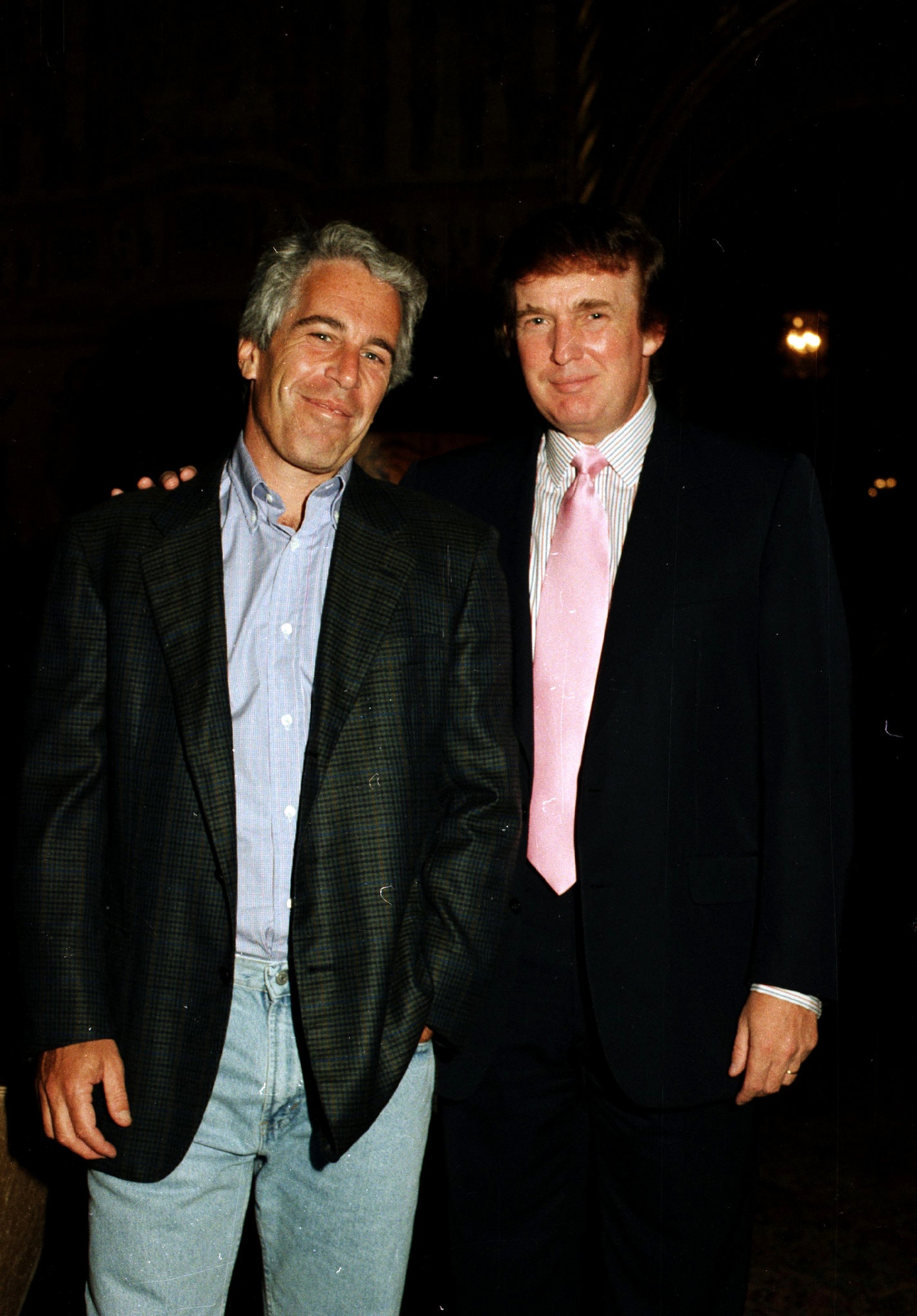 What's up with Barr and his recusal flip-I suspect something is rotten here! Regards, Len


Attorney General William Barr won’t recuse himself from involvement in the new charges filed against alleged sex-trafficker Jeffrey Epstein by federal prosecutors in New York, according to a Justice Department official.

Barr made the decision on Tuesday after consulting with career ethics officials at the department, said the official, who asked not to be identified discussing a sensitive matter.

Barr weighed whether he would have to remove himself from involvement in the case in part because Epstein had previously hired lawyers from the law firm Kirkland & Ellis LLP. Barr served as counsel to the law firm before becoming attorney general.

But Barr has recused himself from any retrospective review of the Justice Department’s decision more than a decade ago letting Epstein avoid prosecution on federal sex-trafficking offenses in Florida and the decades of prison time that he could have faced if convicted.

Labor Secretary Alex Acosta was the top federal prosecutor in southern Florida and approved the widely criticized deal under which Epstein was permitted to plead guilty to two state charges of soliciting a prostitute. He served 13 months in a Florida state prison while being released during the day to conduct business.

Some former federal prosecutors have expressed concern that Barr might interfere in the New York case if he didn’t recuse himself.

While President Donald Trump socialized with Epstein in the past and once called him “a terrific guy,” the president told reporters at the White House Tuesday that he had a falling out with the financier and hasn’t spoken with him in about 15 years. “I was not a fan of his,” he said.

Still, Mimi Rocah, a former federal prosecutor, wrote in an opinion column for the Daily Beast that she was concerned the attorney general may intervene in the case “given Barr’s conduct in the past acting more as a defense attorney for Trump than an overseer of justice.”

The new charges have thrust Acosta and the deal that he approved into the spotlight.

One former administration official said Acosta will face increasing pressure as more documents are revealed in the Epstein case, particularly if they shed new light on what Acosta knew at the time of the plea deal.

Acosta’s standing in the Trump administration was in peril even before the indictment of Epstein cast a fresh spotlight on the former prosecutor’s role in a decade-old plea deal for the financier, according to several people familiar with the matter.

Trump said Tuesday that while Acosta has been “just an excellent secretary of labor,” he will be looking “very closely” at the earlier case involving Epstein.

In postings on Twitter, Acosta said Tuesday, “The crimes committed by Epstein are horrific, and I am pleased that NY prosecutors are moving forward with a case based on new evidence” that “offers an important opportunity to more fully bring him to justice.”

Epstein wants a federal judge to find that sex-trafficking charges against him unsealed Monday in New York are pre-empted by the plea deal he struck with prosecutors in Florida.

During Epstein’s first court appearance in Manhattan, on Monday, one of his lawyers made it clear he’d use that deal as a central part of Epstein’s defense, setting up a fight that could highlight a gulf between federal prosecutors in New York and their counterparts in southern Florida.

The previous agreement was a “global resolution” that was approved at a “very, very high level” of the Justice Department, Reid Weingarten said at the hearing. He called the new allegations “ancient stuff” and said the government was trying to get a second shot at a defunct case.

Epstein Arrest Is a Worry for Donald Trump

The man facing accusations of sex-trafficking and pedophilia has been associated with many high-profile figures, including the U.S. president.
By Timothy L. O'Brien

Jeffrey Epstein, a prominent money manager who owns sprawling homes in Palm Beach, New York, the Virgin Islands and other locales, was charged as a sex trafficker and pedophile by federal prosecutors in a Manhattan courtroom on Monday.

Epstein, who has been accused repeatedly over the years of manipulating and molesting underage girls, was arrested at a New Jersey airport on Saturday, according to multiple media reports. The Daily Beast, which broke the news of Epstein’s arrest, correctly predicted that prosecutors would accuse the financier of luring minors and other women to his homes by offering cash for massages and then sexually molesting them.

In an interesting twist, the U.S. Attorney’s office in Manhattan has put its public corruption unit in charge of the Epstein case – not, as might be expected, its human-trafficking team (although the latter unit is being consulted reportedly). It’s likely, at least in part, that the case is being handled by corruption prosecutors because of a controversial and lenient plea deal struck between Epstein and federal law enforcement officials in Florida back in 2008. The financier was being investigated at the time for having sex with underage girls – many of them orphans or runaways – at his Palm Beach mansion.

The Justice Department said in February that it planned to investigate “allegations that Department attorneys may have committed professional misconduct in the manner in which the Epstein criminal matter was resolved” in Florida. Later that month, a federal judge ruled that the same group of attorneys broke the law by not telling Epstein’s victims that the plea deal existed. The Miami-based prosecutors had prepared a 53-page federal indictment against Epstein, but his deal allowed him to plead guilty only to a state charge of soliciting a minor for prostitution. He served 13 months in a Palm Beach prison that allowed him to leave six days a week to work. The deal also granted immunity to any of Epstein’s potential co-conspirators, who otherwise might have been swept up in his abuses.

Alexander Acosta, who is now President Donald Trump’s labor secretary, was the U.S. Attorney for the Southern District of Florida in 2008 and he supervised the group of lawyers that forged the Epstein deal. Members of Acosta’s team from that period have said that they lacked the evidence to prove Epstein had violated federal law and did as much as they could to see that justice was served. But Julie Brown, a Miami Herald reporter, published a series of stories last fall that raised questions about Acosta’s independence and prompted the new federal probes of the U.S. Attorney’s office in Miami.

Brown’s stories took note of the extensive network of political, business and legal allies assembled by Epstein over the years and questioned the extent to which that network may have protected him or helped cushion his fall. It included: A former president, Bill Clinton; the U.K.’s Prince Andrew; powerhouse attorneys such as Alan Dershowitz, Kenneth Starr, and Roy Black; and business contacts such as Ghislaine Maxwell, daughter of the late publishing tycoon Robert Maxwell, and Leslie Wexner, the owner of retailer Victoria’s Secret. Several years ago, Gawker published a copy of Epstein’s address book and it was packed with marquee names from Hollywood, Wall Street and Washington.

Trump’s name was among them, too.

Seeing the president’s name mixed in with dozens, if not hundreds, of other well-known personalities is hardly unusual. He has had a certain form of celebrity for a very long time. But for a while Trump was more than just a casual acquaintance of Epstein.

The financier was a member of Trump’s Palm Beach club, Mar-a-Lago, and the men dined at one another’s homes. Trump flew on Epstein’s plane at least once. According to Brown, Epstein is quoted in court papers as saying he wanted to set up his modeling agency – which prosecutors believe he used to get access to underage girls – “the same way Trump set up his modeling agency.”

Although a court filing says Mar-a-Lago eventually dumped Epstein from its ranks after he approached an underage girl there, Trump has generally spoken about Epstein fondly – to me and to others. “I’ve known Jeff for fifteen years. Terrific guy,” Trump told New York magazine in 2002. “He’s a lot of fun to be with. It is even said that he likes beautiful women as much as I do, and many of them are on the younger side.”

During the 2016 presidential campaign, an unidentified young woman filed a suit against Trump in which she alleged that he raped her when she was 13 at a party at Epstein’s Upper East Side townhouse in Manhattan. Trump denied the claims and the woman later dropped the suit because, her lawyer said, she was intimidated by death threats. The Trump camp described her allegations as “untrue.”

There’s a strong likelihood that Epstein will end up trying to flip for prosecutors as the reality of a lengthy prison sentence approaches, but it’s unclear how much he has that would be interesting to the feds. If he has anything sordid or compromising that he’s willing to trade about Trump, however, the president could be in for an uncomfortable summer. The public may be interested in that kind of stuff even if prosecutors aren’t.