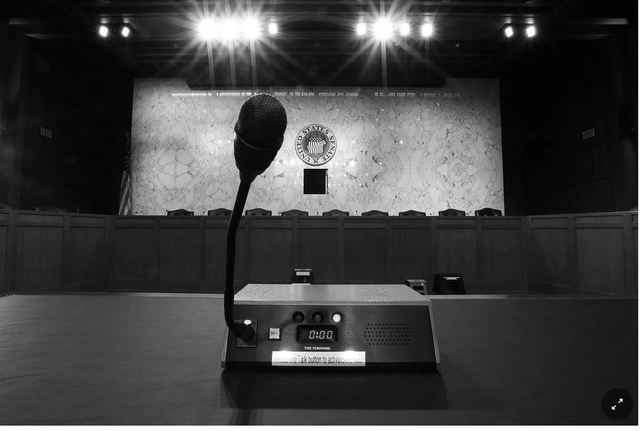 The Senate impeachment trial will be a sham unless top administration officials testify.

By The Editorial Board

The editorial board is a group of opinion journalists whose views are informed by expertise, research, debate and certain longstanding values. It is separate from the newsroom.


An impeachment trial with testimony from key witnesses is the only fair way for the Senate to render a verdict on whether to remove President Trump from office.

The president himself has demanded no less.

“I would love to have Mike Pompeo. I’d love to have Mick. I’d love to have Rick Perry and many other people testify. But I don’t want them to testify when this is a total fix,” Mr. Trump said last month when asked why so many of his top administration officials — including his secretary of state; his acting chief of staff, Mick Mulvaney; and his former energy secretary — were not testifying in impeachment hearings in the House of Representatives. “I want them to testify in the Senate where they’ll get a fair trial.”

Yet Mitch McConnell, the Senate majority leader, has not agreed to have any witnesses testify, making it clear that he would prefer to sweep the entire sordid business under the rug and acquit the president as quickly as possible.

That position was irresponsible enough in the first place, given the overwhelming evidence from the House hearings that Mr. Trump had abused his power for personal gain by trying to get Ukraine to smear his political rival Joe Biden, and then by blocking congressional efforts to get at the truth.

But Mr. McConnell’s stance looks even more wrong in light of new reports from The Times and the national security blog Just Security, which reveal that the administration was even sneakier, and that internal opposition to Mr. Trump was even stronger, than had been publicly known.

The Times reported on Dec. 29 on weeks of intense disagreement among top administration officials over Mr. Trump’s withholding of hundreds of millions of dollars in military aid to Ukraine.

As Mr. Trump’s refusal to release the funds stretched through the summer, Mr. Pompeo, Defense Secretary Mark Esper and John Bolton, the national security adviser who has since resigned, joined forces to try to change his mind.

“This is in America’s interest,” Mr. Bolton said, according to The Times. Mr. Trump was unmoved.

On Thursday, Just Security published the full content of several emails between White House and Pentagon officials that the Justice Department had originally released last month — but, as it turns out, with some pretty important information redacted. The unredacted emails showed that the order to withhold the military aid came straight from Mr. Trump — “clear direction from POTUS to hold,” wrote Michael Duffey, a top budget official — even as Pentagon officials repeatedly questioned the legality of the hold and pushed for the aid’s release.

If it seems that Trump officials are trying to hide key communications about the aid freeze, that’s because they are. On Friday, the White House doubled down, refusing to turn over 20 emails between Mr. Duffey and Robert Blair, a top aide to Mr. Mulvaney, discussing the aid holdup. The Times had sought the emails through a Freedom of Information Act lawsuit.


The law that several officials feared the president was violating, the Impoundment Control Act, prohibits the president from blocking congressionally authorized funds from being paid out unless he notifies Congress. Yet in an email to the Pentagon, Mr. Duffey referred to the hold on Ukrainian assistance as “sensitive” and asked that it be kept “closely held.”

When Mr. Duffey later tried to blame the Pentagon for the hold, the comptroller there, Elaine McCusker, was furious. “You can’t be serious,” she replied. “I am speechless.”

After Mr. Trump finally lifted the hold on Sept. 11, Ms. McCusker asked Mr. Duffey what had changed. “Not exactly clear,” he responded.

It soon became clear: Mr. Trump had been caught. Two days before he released the funds, three House committee chairmen announced they would investigate whether Mr. Trump had pressured Ukraine to investigate Mr. Biden and his son, Hunter, by withholding aid. That same day, the intelligence community’s inspector general notified the House that he had received a complaint from a whistle-blower that, the world would soon learn, was about the president’s conduct involving Ukraine.

And when the White House released the summary of Mr. Trump’s July 25 call with the Ukrainian president, Volodymyr Zelensky, it was there for the world to see: In exchange for releasing the aid, Mr. Trump was demanding Ukraine’s announcement of baseless investigations of the Bidens, and into a debunked theory that Ukraine interfered in the 2016 election.

The House impeachment hearings exhibited hours of damning testimony against the president. And yet they were still missing the central players. The Senate now has the opportunity to fill that void. To obtain crucial testimony, as few as three Republicans would need to join Democrats, if Chief Justice John Roberts, who will preside at the trial, cast a tie-breaking vote in their favor. Any sensible list of witnesses would include Mr. Pompeo, Mr. Bolton, Mr. Esper and Mr. Mulvaney, who carried out Mr. Trump’s order to hold up the aid. In addition, the Senate should take testimony from Mr. Duffey, Ms. McCusker and other officials in order to understand how and why the aid was withheld.

The president has insisted he held back the money out of a deep concern about corruption in Ukraine. This has become impossible to believe, for several reasons.

The Defense Department certified in May, before Mr. Trump put a hold on the funds, and then again in July, that Ukraine had met American-set anti-corruption benchmarks for receiving the money.

Mr. Trump never raised the issue of corruption in his calls with Mr. Zelensky, even though it was on his prepared list of talking points.

There is no record that anyone besides Mr. Trump had recommended withholding the aid for this reason.

And, if the president was fighting corruption, why was he being secretive about it? By the late spring of 2019, the Trump administration had already approved aid packages to Ukraine almost 50 times, not once holding the help up over concerns about corruption.

If the president’s worries about Ukrainian corruption were genuine, why didn’t he order American diplomats to pursue his anti-corruption crusade? Why did he demand the ouster of the American ambassador to Ukraine, who had been aggressively pursuing the problem of corruption? Why did he entrust his goals instead to his personal lawyer Rudy Giuliani? Mr. Giuliani has not been on some sort of broad-gauged anticorruption campaign. He instead spent much of the year snooping around Ukraine like a dime-store detective, pushing for the Biden investigations and promoting the theory of Ukrainian interference in the 2016 election.

Mr. Trump raised both investigations during his July 25 call with Mr. Zelensky, leaning on him “to do us a favor, though,” directly after Mr. Zelensky inquired about the aid and an official visit to the White House. If Mr. Trump was discussing legitimate concerns, why did White House officials scramble to lock away a record of the conversation in a secret computer server?

And why, less than two hours after that call ended, did Mr. Duffey, the politically appointed budget official, send an email to Pentagon budget officials ordering them to continue the hold on the aid?

“Given the sensitive nature of the request, I appreciate your keeping that information closely held to those who need to know to execute the direction,” Mr. Duffey wrote in that message.

What was so “sensitive”? Not only that the president was twisting foreign policy to his personal needs, but that the administration might be violating the law to do so.

A president who was genuinely concerned with fighting corruption would not behave this way. How would he behave? Like Joe Biden did.

In 2015, as vice president, Mr. Biden met with Ukrainian leaders who were expecting an announcement of $1 billion in American aid. But Mr. Biden threatened to withhold the aid until Ukraine fired the state prosecutor, Viktor Shokin, who was widely considered corrupt by the United States and its allies in Western Europe.

Mr. Biden had no problem talking about his concerns and how he acted upon them. He recounted the conversation in a 2018 interview: “I looked at them and said: ‘I’m leaving in six hours. If the prosecutor is not fired, you’re not getting the money.’ Well, son of a bitch. He got fired. And they put in place someone who was solid at the time.”

Mr. Trump and his defenders have tried to exploit Mr. Biden’s words as evidence that he was protecting his son, Hunter, who sat on the board of a Ukrainian gas company that had been investigated for corruption. But in fact the opposite is true: While Mr. Shokin had promised to continue that investigation, he instead allowed it to go dormant.

They have also tried to exploit his words to say that Mr. Trump was using aid as a lever, just as Mr. Biden did. But Mr. Biden was happy to talk about what he was doing because he was carrying out official government policy, not pursuing a personal political agenda. He had nothing to hide.

If Mr. Trump has nothing to hide, if his own decision to withhold Ukraine aid was based on a similar concern for the national interest, and not made for personal gain, then he should be demanding that every administration official involved in the Ukraine machinations testify under oath, in a Senate trial. And Mitch McConnell should welcome them.