Sounds Dictator-Like To Me

Sounds Dictator-Like To Me

Done late Fri and right when the coronavirus should be his highest priority. IMO dangerous and sinister-time for a need to get Schiff back out there on the case. Regards, Len 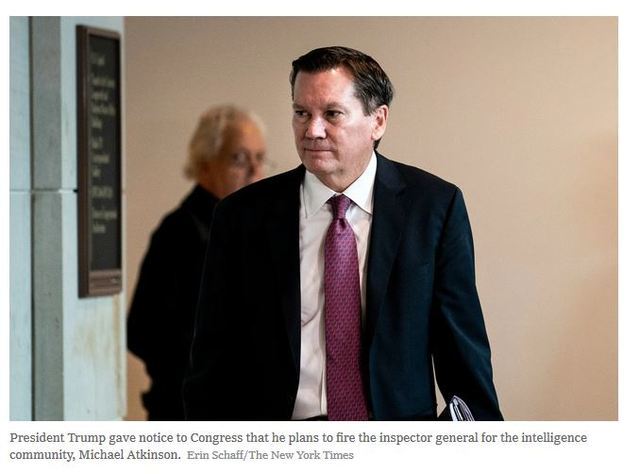 The president notified lawmakers late on Friday, saying he had lost confidence in the inspector general for the intelligence community.

President Trump is firing the intelligence community inspector general whose insistence on telling lawmakers about a whistle-blower complaint about his dealings with Ukraine triggered impeachment proceedings last fall, the president told lawmakers in a letter late Friday.

The move came as Mr. Trump announced his intent to name a White House aide as the independent watchdog for $500 billion in corporate pandemic aid and notified Congress of other nominees to inspector general positions, including one that would effectively oust the newly named chairman of a panel to oversee how the government spends $2 trillion in coronavirus relief.

The slew of late-night announcements, coming as the world’s attention is gripped by the coronavirus pandemic, raised the specter of a White House power play over the community of inspectors general, independent officials whose mission is to root out waste, fraud and abuse within the government.

Mr. Trump is ousting the intelligence community inspector general, Michael K. Atkinson, because he lost confidence in him, the president wrote in a letter to leaders of the two congressional intelligence committees. He gave no further explanation.

The president has long discussed his desire to fire several inspectors general, and he has been talking to aides about his desire to oust Mr. Atkinson since last fall, tarring the inspector general as disloyal because he sought to share information with Congress about the president’s efforts to pressure Ukraine into delivering him personal political benefits.

Mr. Atkinson’s fate was sealed after the trial on impeachment charges ended, said one Trump administration official, who spoke on the condition of anonymity to discuss a delicate matter.

But rather than being permitted to serve for another month, the White House told Mr. Atkinson late Friday that he was being placed on administrative leave, according to multiple people familiar with the matter. The move effectively circumvents the 30-day safeguard by sidelining him immediately.

The administration official described the move as part of a broader shake-up of the intelligence community that Mr. Trump has set in motion in the past several weeks. He recently installed Richard Grenell, the ambassador to Germany known for his combative conservatism, as the acting director of national intelligence, a position where presidents typically look to install career officials or apolitical appointees. And Mr. Trump has nominated one of his top allies in Congress, Representative John Ratcliffe of Texas, to the take over the post permanently.

Mr. Miller has served as an inspector general for the General Services Administration, but in more recent years he has performed a more political role. Among other things, he helped respond to oversight requests for White House documents during Mr. Trump’s impeachment trial. His nomination requires Senate confirmation.

This week, a group of fellow inspectors general named Mr. Fine to be the chairman of the new Pandemic Response Accountability Committee, with control of an $80 million budget to police how the government carries out the $2 trillion coronavirus relief bill. If Mr. Abend is confirmed, Mr. Fine would lose his acting role and could no longer lead the committee.

Mr. Trump also nominated three current and former Justice Department officials to be the new inspectors general at the C.I.A., the Education Department and the Tennessee Valley Authority.

The president has been focused for weeks on rooting out administration officials perceived as disloyal.

In February, after the Republican-controlled Senate acquitted Mr. Trump of charges that he abused his power and obstructed Congress, the president ousted other administration officials who cooperated in the impeachment inquiry by providing testimony, including Gordon D. Sondland, the ambassador to the European Union, and Lt. Col. Alexander S. Vindman, a National Security Council aide.

The White House marched Colonel Vindman out with security guards, along with Lt. Col. Yevgeny Vindman, an Army officer who also worked on the National Security Council staff but had played no role in the impeachment inquiry, but he happens to be Colonel Vindman’s brother.

Before his role in bringing to light Mr. Trump’s actions toward Ukraine that led to his impeachment, Mr. Atkinson had been nominated to the position by Mr. Trump and confirmed unanimously by the Senate.

Representative Adam B. Schiff, Democrat of California and the chairman of the House Intelligence Committee who was the lead impeachment manager, called the “dead of night” firing in the middle of a national emergency “yet another blatant attempt by the president to gut the independence of the intelligence community and retaliate against those who dare to expose presidential wrongdoing.”

And Senator Mark Warner of Virginia, the ranking Democrat on the Senate Intelligence Committee, said: “The work of the intelligence community has never been about loyalty to a single individual; it’s about keeping us all safe from those who wish to do our country harm. We should all be deeply disturbed by ongoing attempts to politicize the nation’s intelligence agencies.”

The two top Republicans on both committees, including Senator Richard M. Burr of North Carolina, the chairman of the Senate panel, did not immediately comment on Mr. Atkinson’s dismissal.

On Aug. 12, Mr. Atkinson received a whistle-blower complaint from an intelligence community official alleging that Mr. Trump was abusing his powers over foreign policy to pressure Ukraine to announce investigations that could deliver him personal political benefits, including by withholding a White House meeting and military aid that Congress had appropriated to Kyiv.

Under a federal whistle-blower law, if the intelligence community inspector general determines that such a complaint presents an “urgent concern,” the Office of the Director of National Intelligence “shall” disclose it to Congress. In a letter on Aug. 26 to the acting director at the time, Joseph Maguire, Mr. Atkinson declared that the complaint “appears credible” and met that standard.

The Trump administration nevertheless refused to send the information to lawmakers, but it later reversed course under political pressure. The initial attempt to cover up what Mr. Atkinson was trying to tell lawmakers drastically heightened attention toward Mr. Trump’s behavior toward Ukraine, touching off the impeachment proceedings.

Mr. Atkinson also protected the identity of the whistle-blower, saying in a missive to Mr. Maguire that the intelligence official’s name was known to him but he was not disclosing it. Some of the president’s allies repeatedly tried to disclose the name of the whistle-blower publicly as the impeachment inquiry proceeded.

During the inquiry, Mr. Atkinson testified before the House Intelligence Committee in a closed-door session about what he knew, even as other administration officials refused to cooperate.

Mr. Trump told lawmakers in his letter on Friday that he would later submit a nominee to replace Mr. Atkinson who “has my full confidence and who meets the appropriate qualifications.” An intelligence official said Thomas A. Monheim, the general counsel of the National Geospatial-Intelligence Agency, would serve as acting inspector general.

On Twitter, Andrew P. Bakaj, a lawyer who represented the whistle-blower, quickly labeled the dismissal “retaliation.”

But the high-pressure role of an inspector general carries the risk of aggravating presidents or senior officials in any administration. Mr. Atkinson’s predecessor I. Charles McCullough III said he kept few personal items in his office because he feared he could be fired at any point.

“The job is not for the faint of heart — it’s a job hazard for anyone in an I.G. position,” Mr. McCullough said.

Mr. Atkinson, Mr. McCullough said, “messed with the bull and got the horns.”