As a mob stormed the Capitol, the word “sedition” was on many people’s lips. Its force is clear, but its echoes across American history are more complex and ambiguous. 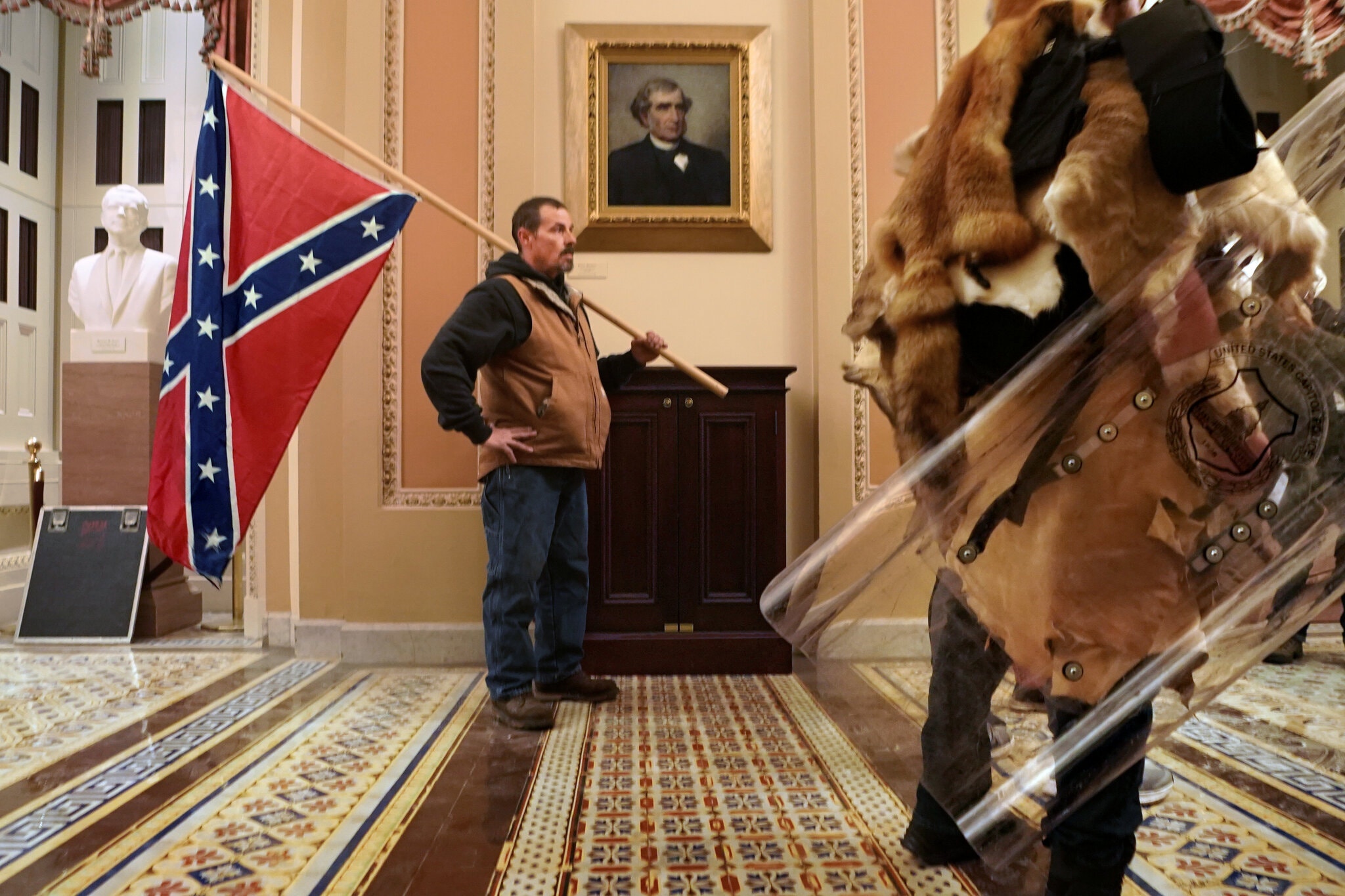 As a shocked nation reacted to the storming of the United States Capitol on Wednesday by a pro-Trump mob trying to disrupt the certification of the presidential election, one word describing the chaos quickly rose to the top.

“It borders on sedition,” President-elect Joseph R. Biden Jr. said in his remarks to the nation.

“This is sedition,” the National Association of Manufacturers said in a statement that accused President Trump of having “incited violence in an attempt to retain power.”

And within the first hour of the attack, Merriam-Webster reported that “sedition” was at the top of its searches, ahead of “coup d’état,” “insurrection” and “putsch.”

Sedition — Merriam-Webster defines it as “incitement of resistance to or insurrection against lawful authority” — is a word that echoes across American history, archaic yet familiar. Historically, charges of sedition have just as often been used to quash dissent (the Sedition Act of 1918, for example, made it illegal to “willfully utter, print, write, or publish any disloyal, profane, scurrilous, or abusive language about the form of the Government of the United States”) as they have to punish actual threats to government stability or functioning.

But to many scholars and historians, the use of the word on Wednesday — and the force of condemnation it conjured — was not misplaced.

“Treason, traitor, terrorism, sedition — these are strong words with specific meanings that are often tossed aside in favor of their buzzword impact,” Joanne Freeman, a historian at Yale University and the author of “The Field of Blood: Violence in Congress and the Road to the Civil War,” said in an email. “But meanings matter. And sometimes, those words apply.”

That wording may emphasize force. But Geoffrey R. Stone, a legal scholar at the University of Chicago and the author of “Perilous Times: Free Speech in Wartime, From the Sedition Act of 1798 to the War on Terror,” said that, historically, sedition has been centrally a matter of speech.

“Normally, it refers to speech that advocates action or beliefs that are designed to overthrow or undermine the lawful processes of government,” he said. “Actions like burning down a building, or assassinating someone — those are separate crimes.”

As for those who rushed the Capitol on Wednesday, he said, they might argue that what they were doing was protesting, which is protected under the First Amendment.

“The problem is, they’ve gone beyond the bounds of what the First Amendment would protect as speech,” he said in an interview while the mob was still inside the building. “It does not protect trespassing, and what they are doing arguably goes beyond that. What they are doing is trying to prevent the government from functioning.”

When did Americans start talking about “sedition”?

Revolutionary America was awash with charges of sedition — against the British Crown. The idea of “sedition” as a crime against the new republic itself became entrenched in the American political lexicon in the 1790s. It was a time of intense partisan conflict, before the system of opposing parties — and the norm of peaceful transfer of power that was disrupted on Wednesday — was established.

The Alien and Sedition Acts, passed by the Adams administration in 1798, were intended to clamp down on the political enemies of the Federalists, Adams’s party, and weaken Thomas Jefferson’s Democratic-Republicans. The broader backdrop was a brewing conflict with post-Revolutionary France, and Federalists’ belief that Democratic-Republican criticism of their policies undermined national stability, and their fear that foreigners and immigrants, who leaned Democratic-Republican, would support France in a war.

Under the law, journalists who criticized the administration were thrown in jail, immigrant voting rights were tightened and foreigners deemed “dangerous to the peace and safety of the United States” could be deported.

“That took place in the context of an infant republic that was unsure of its place in the world,” Annette Gordon-Reed, a professor of history and law at Harvard, said. “This was all new: How do you protest? What effect does protesting have on government?”

But “we’ve had almost 250 years now,” she continued. “We know the mechanisms for legitimate criticism, and they do not involve sabotaging the operations of government when those operations have been arrived at by lawful means.”

Who was “seditious” in the early 19th century?

Adams and the Federalists were defeated in the 1800 election, “not only because of the Sedition Act,” Professor Freeman said, but because of what it represented — the Federalists’ “anti-democratic spirit generally.” Thomas Jefferson and the victorious Democratic-Republicans allowed the law to expire in 1802.

But “sedition” remained a potent concept. And it was increasingly used against abolitionists, and to block any efforts by African-Americans, free or enslaved, to secure rights or otherwise challenge slavery and white supremacy.

In 1832, after Nat Turner’s rebellion, Virginia passed a law against “riots, routs, unlawful assemblies, trespasses and seditious speeches by free Negroes or mulattoes,” who were to be whipped “in the same mode, and to the same extent” as rebellious slaves.

Who charged “sedition” during the Civil War?

As the sectional tensions over slavery intensified, charges of sedition flew in both directions. Southern slaveholders accused Northerners who opposed slavery of fomenting sedition and insurrection. And the words were lobbed at Southerners who gave speeches questioning the authority of the federal government, even before Abraham Lincoln’s election in 1860 prompted 11 Southern slaveholding states to secede and ultimately take up arms against the United States. 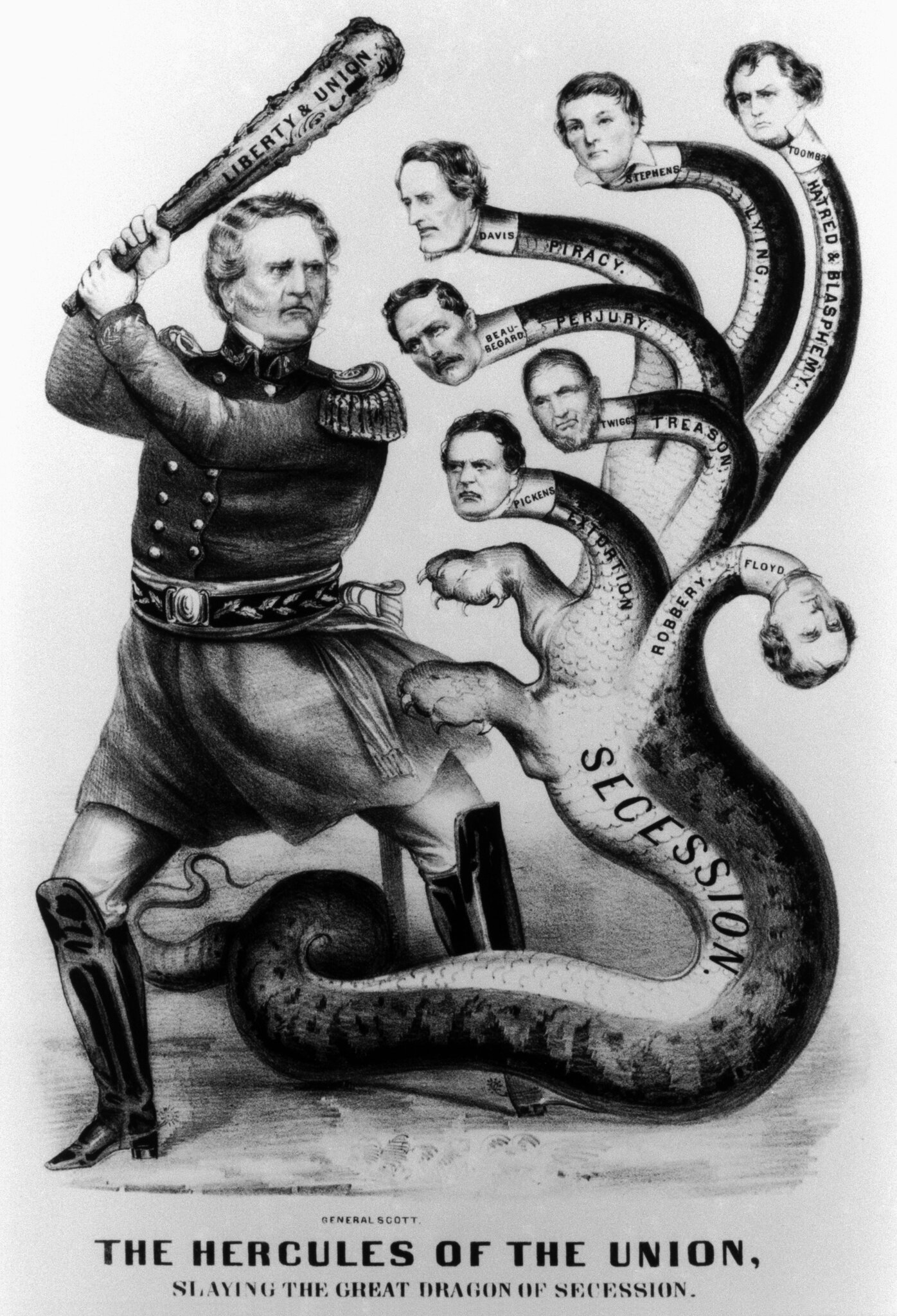 Accusations of sedition flew in the Civil War era. In this cartoon, a Union general tries to slay a dragon whose heads are those of the leaders of the Confederacy. Credit...Corbis via, Getty Images

“The language is just so strong in the literature of the period,” said Manisha Sinha, a historian at the University of Connecticut who studies abolitionism, the Civil War and Reconstruction. “These people were not just slaveholders, which was morally abhorrent, as abolitionists had been saying for ages. They were traitors who had committed sedition, insurrectionists who had tried to disrupt American democracy.”

And during the war, charges of sedition also circulated within the North itself. When Lincoln suspended the right to habeas corpus, it was justified as a necessary response to threats posed by vocal critics of the war effort.

Was Reconstruction destroyed by “sedition”?

To many historians, the storming of the Capitol on Wednesday recalled a very specific history: the many white supremacist attacks on Black voting rights and legitimately elected governments during Reconstruction.

In 1874, as part of a continuing effort to overthrow an elected biracial government, white militia members in Louisiana attempted to seize government buildings in New Orleans, then the capital, and install their own government, before ultimately being dislodged by federal troops.

In what is said to have been the only successful coup in American history, white businessmen and former Confederates in Wilmington, N.C., conspired to dislodge an elected biracial government in 1898. Credit...Library of Congress

More straightforwardly successful was an 1898 coup d’état in Wilmington, N.C., when white businessmen and former Confederates conspired to dislodge a biracial government and gut Black economic power. The ensuing riot left scores of people dead and most of the city’s Black citizens stripped of voting rights for decades.

There were numerous such episodes of violent white supremacist “redemption” across the South, many of which have only begun to be recounted honestly. And that historical echo was underlined by the spectacle of men with Confederate flags parading through the halls of the Capitol — a sight, many noted, that would have been unthinkable during the actual Civil War.

“Sedition” may have captured the moment yesterday. But some historians question whether it is the most illuminating verbal touchstone, given its own complicated history.

“To me, the better phrase is ‘vigilante antidemocratic paramilitary violence,’” Gregory P. Downs, a historian at the University of California, Davis, who studies Reconstruction said. “It does what ‘sedition’ can keep us from doing: connect what’s happening today with what happened in American history.

“When people say this doesn’t happen in America, they reveal their idealism, but also their ignorance,” he said. “It has happened before. And it can happen again.”

Jennifer Schuessler is a culture reporter covering intellectual life and the world of ideas. She is based in New York.
Top
Post Reply
1 post • Page 1 of 1

Users browsing this forum: No registered users and 13 guests