Book: "In the Frame - Helen Mirren"

Book: "In the Frame - Helen Mirren" 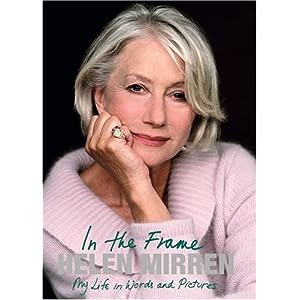 Searching for a book on English actress Helen Mirren, I ran across a copy of the above for one cent ... yes, one American copper penny! Post was $3.99 so the whole thing was $4/USD. This was through a third-party with Amazon. You should know there are others selling the book for as much as $28.00 plus post (maybe more by now). It's a finely printed book by Atria Books carrying a cover price of $35, published in 2008. My copy is in pristine condition.

Some time ago, I remember seeing a film with the celebrated British actress HELEN MIRREN. I can't recall the name of it as I only saw a part of it, but it may have been The Queen where the likeness to Queen Elizabeth is quite extraordinary. It's one I want on DVD for sure. It was a piece of acting that was reminiscent of the qualities of Katharine Hepburn at her dramatic best.

Helen Mirren was born in England in 1945. Her father was Russian and her mother English. She was born Ilyena Vasilevna Mironov. She is noted for a "hot" film entitled Caligula, which I have not seen. She has appeared in countless films both in the USA, England and elsewhere, and is known for her stage work as well.

Among her most recent work is a film entitled The Debt (2009). Wiki has this to say about it: “In preparation for her role as a retired Israeli Mossad agent in the film The Debt, Mirren reportedly immersed herself in studies of Hebrew language, Jewish history, and Holocaust writing, including the life of Simon Wiesenthal, while in Israel in 2009 for the filming of some of the movie's scenes. The film is a remake of a 2007 Israeli film of the same name (Hebrew: Ha-khov)."

Lance wrote: Are there other dramatic roles you think are outstanding with Helen Mirren?

Only everything I've ever seen her in. There are two movies I saw her in without knowing until much later that it was her: Excalibur on original release, where she plays Morgan, and The Madness of King George, where she plays the queen.
There's nothing remarkable about it. All one has to do is hit the right keys at the right time and the instrument plays itself.
-- Johann Sebastian Bach
Top

All the Prime Suspect series are excellent...
Sent via Twitter by @chalkperson
Top
Post Reply
3 posts • Page 1 of 1