This film was made by the students at the school I am privileged to teach at. Here is an article about it from the Cleveland Plain Dealer and cleveland.com.

St. Edward filmmakers learn from women how to be better men 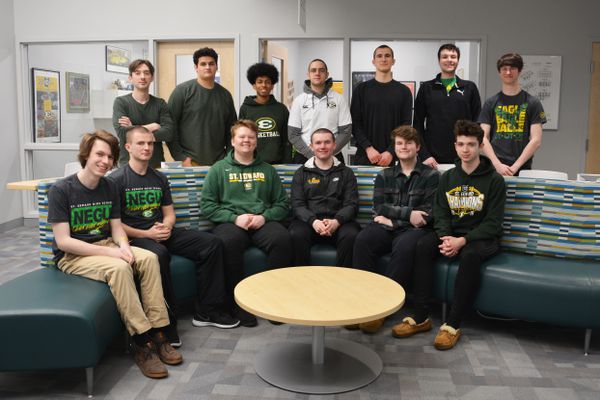 By Andrea Simakis, The Plain Dealer

CLEVELAND, Ohio -- When I was in college, a kid came loping down my street. He spotted me, getting some sun on the stoop of my apartment building, grinned and delivered a come-on with a creatively gross flourish, something about wishing he was the stair I was sitting on. Before I could respond, a woman walking a few steps behind him cuffed him in the back of the head.

“You don’t talk to women like that!” she scolded. “That’s not how I raised you!”

Wouldn’t it be nice if she could be around all the time to remind him how to treat women? Popping up behind him in the college dorm he’d one day occupy; perched on the desk of his office cubicle; glowering at him from the corner of his favorite bar . . .

Delicious as the fantasy is, omnipresent mothers aren’t the way to stop men from behaving badly. Men should govern themselves. That so many men don’t is the dirty little, not-so-secret, secret exposed by #MeToo Movement.

So how will boys grow into men who don’t prey on women or casually belittle them?

A 22-minute documentary short, created by 17 teen-aged boys at St. Edward High School, is a start.

“Labyrinth,” made in association with the Cleveland Rape Crisis Center, screens Thursday at the Cleveland International Film Festival.

Spurred by the high-profile scandals of men in high places acting like low down dogs, Nick Kuhar’s students from classroom L202 spent last spring interviewing women throughout Greater Cleveland about how they navigated the sexist maze of a world that’s invisible to most men. How, the teens wanted to know, had misogyny, sexual harassment and sexual assault affected these women’s lives?

But here’s what I wanted to know: What had making the film taught the boys -- now all seniors -- of St. Eds?

Lesson one was that there was more to “MeToo” than what was happening in Hollywood. Everyday women were being harassed every day.

“I think we tend to pat ourselves on the back when we see some big celebrity like Harvey Weinstein or R. Kelly get exposed,” said Altan Dinchman. “But we need to recognize that this is something that has always been below the radar. . . It’s something that we’ve ignored for a long time.

“What we’re doing is trying to say, ‘This is happening everywhere you look -- if you look close enough.’ ”

They all went into the interviews recognizing that sexual assault “is an evil thing to do,” said Malen Cuturic. What they didn’t know is how bad smaller acts, including “micro-aggressions, like cat calling,” made women feel.

“The most surprising thing for me wasn’t any incident but the fact that the stories that we heard were so ubiquitous,” said Malen. “You quickly start to realize that everybody has a story about feeling unsafe walking down the street. Everybody has a story about feeling unsafe [using] public transportation or in a work environment. And the details are frighteningly similar in these stories.

“It’s like the same story happening again and again and we just don’t think about it because we don’t care about it.”

The landmines waiting just outside a woman’s door were revelations to the St. Ed’s 17 -- the hey-baby! shouted from across the street; the exhortations to smile.

So were the strategies women developed to avoid them, from wearing ear buds on the bus even when you’re not listening to music, to nestling a key between your fingers should you need a weapon in a lonely parking garage or while waiting for the RTA after dark.

“I think we really came to realize as a group that there’s a line,” said Finn Norman. “There’s a difference between a compliment and something that’s entirely inappropriate.”

Some stories, they still can’t get out of their minds.

For Kyle Sminchak, it’s the one where a young woman describes a conversation she had with a college friend.

When he felt stressed out, at like 3 in the morning, the friend told her, he’d just go for a walk. Why didn’t she do that when she needed to clear her head?

“To me it’s so impactful,” Kyle said, “because it’s just something small like taking a walk at night and she fears for her life.”

Empathy can be taught, said Alexander Leslie, senior director of educational services for the Cleveland Rape Crisis Center (CRCC). “It’s like exercising. The more we do it, the better we get at it.”

Middle and high school are optimal times to start working out. By college, a kind of moral atrophy has begun to set in.

John Swansinger wishes they would have interviewed men as well. The catcallers and worse.

Why did you do it? John would ask them. “I think that’s a very important question.”

He’d also want to grill guys “who just stand in the corners” and do nothing while a woman is clearly being harassed. Why didn’t you call the guy out? Tell him to chill.

“We have to dive into this question of what it means to be a man,” he said.

Days later, as I was telling my editor what John and his classmates said, I felt a catch in my throat. As I tried to keep the tears in, I noticed she was too. We laughed at ourselves, a little embarrassed. I told Alex at CRCC about our surprising, emotional reaction.

He wasn’t surprised at all.

“It’s nice when somebody gets it,” he said.