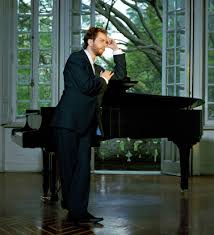 AMERICAN virtuoso Adam Neiman (b. 1978), a pupil of Hans Boepple and Herbert Stessin, presented a powerhouse Rachmaninov and Liszt recital for the Steinway Society the Bay Area, Saturday October 22, 2011 at San Jose’s Le Petit Trianon, a program comprised of two major opera, Rachmaninov’s set of five pieces, Op. 3 (1892) and Liszt’s complete set of Transcendental Etudes (1826; rev. 1839 and 1851). By the time Neiman generously bestowed his one encore, Liszt’s ubiquitous Liebestraum No. 3 in A-flat Major, the transfixed audience stood en masse, caught between sustained applause and jaw-dropped awe for the demonstration of digital prowess and unabashed gusto Neiman brought to his chosen repertory.

Rachmaninov composed his Op. 3 suite of five pieces at age nineteen, quite an achievement, especially when we consider the unprecedented popularity of the eternal C-sharp Minor Prelude, based on the composer’s penchant for tolling bells and the Poe poem of the same name. The E-flat Minor Elegie from Neiman cast Chopin’s brooding side, cross-fertilized by Liszt’s passionate filigree. The measured solemnity of the Prelude soon yielded to the syncopated obsessions and thick textures in the E Major Melodie. The sense of parody infused in the Polichinelle conveys Rachmaninov’s fascination with the Commedia dell’Arte and Schumann or Mussorgsky’s influence. A hint of the waltz imbues the concluding Serenade, with Neiman’s emphasizing the Spanish guitar or strumming effects, often modulated dynamically to the most (pppp) intimate whispers. If one suggested that Liszt’s own serenade-etude in crossed hands, “Un Sospiro,” served as a model, I would not argue the point.

The entire second half, prefaced by a detailed—if not outright pedantic—lecture from Neiman, devoted itself to Liszt’s awesome Transcendental Etudes for piano, his own corollary to the 24 Caprices Niccolo Paganini left as a legacy to the art of violin playing. Aristotle had argued that “Nature abhors a vacuum,” and Liszt’s comprehensive opus attempts to fill in every conceivable gap in keyboard technique, if Chopin’s own sets had not already claimed hegemony. Neiman claims to have devoted two years to the mastery of these daunting works: the sheer stamina of arm and wrist articulation, besides the gargantuan number of notes to memorize, bespeaks a combination of technique and a pursuit of stylistic glamour that has few rivals.

From the opening Preludio in C, rife with aggressive trills and grand arpeggios, we audience members sat transfixed by a ceaseless torrent of Romantic rhetoric, a Faustian pursuit of digital perfection. The Paysage in F argued Victor Hugo’s (by way of J-J Rousseau) conceit that we abandon “civilization” for the bucolic revelations of Nature. Victor Hugo again informs the D Minor Mazeppa, a thundering etude set to a program of military heroism, Neiman’s sweeping us along in potent, slashing octaves. Neiman claims that “Impressionism rightly begins” with Liszt’s deftly diaphanous B-flat Major Feux follets, a possible response to a witches’ scene in Goethe’s Faust. Vision in G Minor takes another cue from Victor Hugo; to Neiman, the source lies in Napoleon, especially as its procession land bass harmonies tie to the next piece, Eroica in E-flat Major, and Beethoven’s own response to arrogant, imperialistic ambitions. Among the visceral moments of this evening came Wild Jagd in C Minor, for sheer ferocity in Neiman’s many-stringed arsenal of effects; here a feral gallop that rivals pages in Weber, Berlioz, and Franck for demonic rides to the Abyss.

With No. 9 Ricordanza in A-flat Major, Neiman permitted his softer side--as he had in Paysage--its flights of poetic fancy, in jeweled, Neapolitan harmonies laced with smiles of old pleasures and tears of regret. The F Minor bears no illustrative title, but its tarantella furies marked Allegro molto agitato convey no end of Mephisto’s proud defiance, Milton’s provocation from Satan that it is “better to reign in Hell than to serve in Heaven.” Liszt’s innate predilection for ecstasies—high and low—rang true in Neiman’s lovely Harmonies du soir in D-flat Major, a finely-pedaled nocturne that exploits Liszt’s idiosyncratic approach to chromatic harmony in broken chords. Finally, the infamous Chasse-neige in B-flat Minor, a virtual “snowplow” in chromatic harmony and nuanced tremolandi that requires seamless wide jumps and tempo rubato. Neiman had the music purring in provocative colors, layering what Ferruccio Busoni had characterized as “a sublime and steady fall of snow which gradually buries landscape and people.” That Neiman still had the energy (and good graces) to transport us to the “dream of love” as an encore testified to the kind of superhuman artistry Liszt intended when he penned his massive opus. ♫
_________________________________