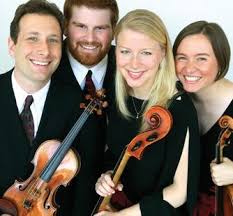 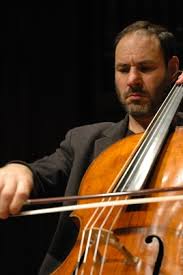 Stringing Us Along: The Cypress String Quartet Concert
By Gary Lemco

THE CYPRESS SRING QUARTET—Cecily Ward and Tom Stone, violins; Ethan Finler, viola; and Jennifer Kloetzel, cello—performed Ravel and Schubert at the Le Petit Trianon Theatre in San Jose, under the auspices of the San Jose Chamber Society, on October 23, 2011 a dazzling concert that featured guest cellist Gary Hoffman, who had flown in from Paris, to play both solo and as part of the ensemble for Franz Schubert’s magnum opus, the String Quintet in C Major, D. 956.

Gary Hoffman opened the program with a relative rarity, the Suite for Solo Cello (1926) by Gaspar Cassadó (1897-1966), the Catalan master cellist who ran afoul of his teacher and mentor, Pablo Casals, on matters political. In three sections loosely modeled on Bach solo suites, the Cassadó opus indulges in Spanish rhythms and colors, often utilizing Catalan or Basque dance forms as a source of inspiration. The Preludio-Fantasia quickly became a zarabanda in 3/2 that quoted from the Kodaly Unaccompanied Sonata and Ravel’s ballet Daphnis et Chloe. The two-part modal and angular Sardana projected a courtly dance with a drone bass, an antique sound of dignity and pathos. The last movement, Intermezzo e Danza Finale might pay homage to the Interlude and Dance by Falla (from La Vide Breve) or the Granados Intermezzo from Goyescas. A vivacious jota rhythm made us see flamboyant costumes and hear the clatter of castanets in its evocation of Spanish folkways in music.

The first half of the concert closed with a vivid rendition of Ravel’s 1903 Quartet in F Major, a marvel of French color qualities drawn from Debussy and Faure, as well as the exoticism of Javanese gamelan music. Violist Ethan Finler dominated this performance of the Ravel, setting the initial theme in duple rhythm against the plaintive riffs from violinist Cecily Ward. Exotic and languorous, the music waxed warm and seductive, a Tahitian call from a painting by Gauguin. The wild pizzicati of the Assez vif movement—with its waltz-like trio section—had the outer instruments set in ¾ against the interior 6/8 meter; and if the syncopes did not compel us enough, the shimmering tremolos and bird-call trills set us in a jungle that only Henri Rousseau would care to portray. The Trés lent movement communicated an easy, improvised character, sensuously demure and erotically precise. The affect became olfactory, as if Ravel were distilling some exotic perfume in a rarified atmosphere. High voltage vivacity retuned for the Vif et agite finale, its five-beat meter resounding in often polychromatic colors. By the time the last chords sounded, the audience could barely contain its collective, grateful energy.

For the final work, Schubert’s grand String Quintet in C Major (1828), Gary Hoffman joined the Cypress ensemble to serve as that deep-toned low voice that liberates the instrument from any “imitative” status to an independent line, either sung or plucked. The magical first movement, with its C major sonority that suddenly acquires a D minor coloration, enchanted us with that “heavenly length” built of a melody beyond compare, chanted in parallel thirds and sixths. Taut lines, rich interior coloration, and vivid stretti and counterpoint marked the development and rich-tapestried recapitulation in this movement. The ensuing Adagio proved no less mesmeric, haunted between E major and F minor, the middle section a real maelstrom of conflicted emotions that grudgingly succumb to the quelling resignation of the opening bars.

With the Scherzo in C (or D-flat), the sonority of the ensemble opened up, a vivid hunting motif that became passionate and insistent. Yet, here too Schubert’s exultation falls prey to despair, moving to a duple meter in the minor, a “woman howling for her demon lover.” But the triple meter returned, the quintet once more pulsating in the consolations of the moment. Only in the Allegretto finale, a Hungarian gypsy tune augmented by café or cabaret motifs, did something like unfettered joy emerge, especially since the coda—in an example Brahms would find quite compelling—asks for two major tempo accelerations that had the Cypress Quartet and Hoffman sawing the strings off their instruments in white heat. A collective sigh and torrent of applause marked a chamber music concert by top-flight musicians. ♫
______________________________