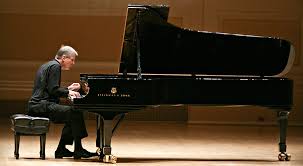 Delineate and Clarify: Christian Zacharias in Recital
by Gary Lemco

VETERAN PIANIST Christian Zacharias (b. 1950) offered an elegantly intellectual and emotionally gratifying recital at San Francisco’s Herbst Theatre Friday, December 9, an Austro-German program that included music by C. P. E. Bach, Brahms, Beethoven, and Schubert. By the time Zacharias proffered his one encore, Mozart’s D Major Rondo, K. 485—as he said, “in sympathy with the D Major of the Schubert sonata”—the beguiled audience stood in unison, completely convinced one of the modern masters of the keyboard had graced us with delineated, articulate beauty for his San Francisco debut.

Zacharias, who wears a most informal garb and makes little audience contact, sits to perform virtually for himself; and so we eavesdrop on an intimate dialogue between kindred, gifted spirits. Zacharias chose two works by C.P.E. Bach, the 1781 Sonata in A Minor, Wq. 57, No. 2 and the C Minor Rondo, Wq. 59, No. 4 to begin, works that well anticipate Beethoven with their sudden shifts in register and dark temperament. Improvisational in style and chromatically rich in content, the two works set the tone for Zacharias’ rapt approach, aided in all aspects by his high wrist position, utterly relaxed, and the penetrating attention to details of nuance, harmony, and melodic flux. The A Minor Sonata’s syncopated Andante enjoyed a parlando voicing most memorable, while the skittish Allegro di molto asked for bravura articulation in triplets and ended on a bemused half-cadence.

Next came the Four Keyboard Pieces, Op. 119 by Johannes Brahms (1893), inward, often chromatically daring works that intimate at the “old bachelor” sentiments—”lullabies of pain” he called his late klavierstuecke—harbored by the aging composer. In ternary song form, the pieces often digress into harmonic labyrinths of metric units presaging developments by Schoenberg and the Second Viennese School. The B Minor Intermezzo lacked nothing for its reclusive angst, but Zacharias imparted a virility and a forward sense that made of the entire Op. 119 one continuous whole. The famed central teneramente section of the E Minor Intermezzo conveyed warmth tinged by melancholy. The skittish C Major Intermezzo—long favored by Artur Rubinstein—danced elusively in 6/8 and successively intricate metric variants. Even a Brahms rhapsody must conform to sonata-form, so bent is Brahms on emotional restraint; but the E-flat Rhapsody did gain from Zacharias a fluid energy and driven authority, despite its gloomy turn in the coda to the tonic minor.

The last work before intermission, the Beethoven Sonata No. 31 in A-flat Major, Op. 110 (1821), challenges each artist who addresses it to find emotional continuity in its intricate pages that move from sunny lyricism to convulsive agony and final triumph. Zacharias applied his calling-cards--his crystalline articulation and rich sonority—to this complex opus, the first movement Moderato cantabile molto espressivo’s rising to a kind of swan-song of tender beauty. By contrast, the bursting fury of the Allegro molto second movement, though its dire figures could be heard in the first movement, hurled us both aloft and downward. The last movement’s combination of adagio and fugue kept us enthralled throughout its alternately grieved and aspiring melodic lines. Moving inexorably, exerting every color-control in his palette, Zacharias moved through the staggered utterances seamlessly, finally advancing contrapuntally to a five-octave apotheosis of inextinguishable selfhood.

Schubert’s Sonata in D Major, D. 850 (1825) stands along the last three sonatas of C Minor, A Major, and B-flat Major as among his grandest conceptions. While Robert Schumann found the music disjointed, modern masters beginning with Artur Schnabel have celebrated its idiosyncratic, mellifluous melody and striking colors. Zacharias imposed the long line the first movement’s knotty figurations, martial sentiments, and crossed-hand articulation. Even within the lofty or bold expressiveness we felt an interior dark side to the human condition. Marked Con moto, the expressive second movement reveals the true heart of the work, passionate, melancholy, and with Zacharias, Viennese. Often, the musings resembled those of Schubert’s various Impromptus, notably that in F Minor, D. 935, No. 1. Intensely obsessive rhythmically, the music no less achieved that diversity-in-unity that proves the miracle of art. For the Scherzo, Zacharias invoked his music-box sonority, the dotted rhythms and chordal trio’s dancing in rustic, buoyant pictures from Brueghel. Finally, the folksy Rondo: Allegro moderato that often sounded like one Mendelssohn’s character-pieces, a song without words. Ingenuous and disarming, Schubert seems to have offered “childlike faith” as an answer to the Beethoven furies with which the sonata first confronted heaven and earth. ♫
______________________________________

I believe that Zacharias presented the same program at Carnegie Hall on Tuesday night. Did anyone from CMG go? If so, we can get a third view of this pianist!
Top
Post Reply
2 posts • Page 1 of 1