January 21, 2007
music
A Tenor Cashes in on His Money Notes
By MATTHEW GUREWITSCH 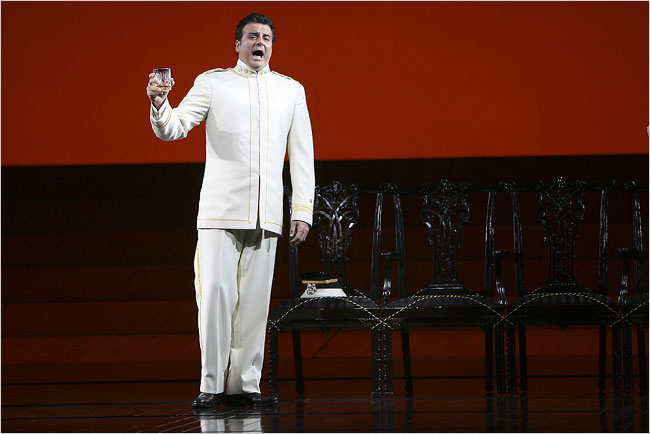 IT’S ancient history, but the Sicilian tenor Marcello Giordani makes it a point of honor to acknowledge the crisis. His career got off to a promising start in Spoleto, Italy, with Verdi’s “Rigoletto” in 1986. He was 23, and he had plenty going for him: musicality, easy high notes, a handsome face, a good physique. And he was tall — a godsend to leading ladies.

“But I was trained badly,” he said one afternoon in November, taking a breather in a voice lesson with Bill Schuman, his teacher since 1994. Back when the two began working together, Mr. Giordani’s high notes were cracking, and his confidence along with them. With Mr. Schuman’s help he quickly gained a secure grip on his instrument.

“My voice is my friend now,” Mr. Giordani says today.

Between performances of the Metropolitan Opera’s hit production of Puccini’s “Madama Butterfly” Mr. Schuman was going through rigorous vocal calisthenics, punctuated with shoptalk, industry gossip and pats on the back.

“Marcello is lucky,” Mr. Schuman said between volleys of vocalise. “He has two high C’s in his voice: one full out, the other one ‘mixed,’ or gentler. Other guys have one high C and say a prayer.” As chords pealed from the keyboard, Mr. Giordani soared beyond high C to clarion D’s and E flats, ear-splitting in the tiny studio.

“Some conductors want five p’s,” Mr. Giordani said, referring to the abbreviation for “piano,” or soft. “I can’t do five p’s. But I can do two.” That already gives him an uncommon dynamic range. A soprano can make her fortune on her high pianissimo, but tenors in the middle to heavyweight class win on decibels.

A tenor’s job has hardly changed in the last 100 years. Enrico Caruso, who died in 1921, could work all he wanted at the Met today and never have to learn another note. But surely he would sing just one role per season rather than run the gamut of his repertory, as was the norm in the pre-jet era. “Nobody does that anymore,” Robert Tuggle, the Met’s director of archives, said in a recent conversation.

Nobody, that is, but Mr. Giordani, who turns 44 this week. Last fall his Met assignments included not only “Madama Butterfly” but also Ponchielli’s “Gioconda.” In addition he picked up a “Rigoletto” on eight hours’ notice when a colleague called in sick. He will be heard in Puccini’s “Bohème” beginning on Wednesday and in Verdi’s “Simon Boccanegra” next month.

Although engagements in Paris, Rome, London, Zurich and other opera capitals may preclude such intensive exposure here in future seasons, Mr. Giordani is under contract for a string of plum assignments at the Met. Peter Gelb, the Met’s general manager, calls him “one of our most important singers.” “We have plans with him that extend into the 2011-12 season, which is about as far as our planning goes at this point,” Mr. Gelb said last week. “He will be featured in a wide variety of new productions and important revivals from now until then.”

To Verdi, Puccini and the other composers Mr. Giordani concentrates on, the tenor voice embodied youthful heroism and romance. The poetry in his soul is expressed in melody, but he lives by his high “money” notes, which are as much a matter of brawn and nerve as of art.

“It may not be politically correct to say this, but a top note is like an orgasm,” said Mr. Giordani, who in 2005 thrilled the audience of the Opera Orchestra of New York with his cascade of money notes in Rossini’s “William Tell,” especially in an ecstatic call to arms that he sang four times when he might proudly have called it a night after one. His track record with the orchestra has been written in superlatives: in 2002, in Cilea’s “Adriana Lecouvreur,” he “sang like a god,” Anne Midgette wrote in The New York Times; in 2004, his aria in “La Gioconda” stopped the show with a four-minute ovation.

Fierce passions in the drama kindle Mr. Giordani’s own, which he ascribes to his Sicilian heritage. “Sicily is a blessed land,” he said. “First, because of its geographic position in the Mediterranean. Second, for its history and all the different peoples who have settled there: Arabs, Greeks, Normans, the Swedes. That has made us different from others. We exaggerate, we overdo. We love Greek tragedy. We cry, we fight, sometimes for nothing. We don’t have the middle of the line. We’re on the edge.” He still makes his home in his native Augusta, on Sicily’s eastern shore.

Mr. Giordani’s ascent to the peak of his profession has been a rather quiet affair. Ignored by the major record labels, he never had the sort of publicity blitz that skyrocketed tenors like Roberto Alagna, José Cura, Rolando Villazón and now Joseph Calleja to early fame. Conversely he has been spared any backlash like the frenzy last month when Mr. Alagna walked out of “Aida” at La Scala.

“I learned my profession onstage,” Mr. Giordani said. “I didn’t have a musical background. I had no conservatory training. I don’t play an instrument.”

The youngest of four brothers, he went to work in a bank right out of school, but business bored him. At 19 he complained to his father, a former prison guard who by then owned a gas station. His father pushed him toward music.

“He loved opera,” Mr. Giordani said. “He heard me singing all the time when I was a kid. Maybe he always dreamed that one of his sons would be an artist.”

The transition was surprisingly easy. “God smiled on me in every sense,” Mr. Giordani said. “I was born a tenor, and you know what that means. Tenors are a rare commodity. You can work immediately. And step by step, I found people who believed in me.”

Especially in America. Two years after his Spoleto debut, the American agent Matthew Laifer brought him to this country, where Robert Bailey, then the general director of the Portland Opera, in Oregon, cast him in Bizet’s “Pêcheurs de Perles.” Speight Jenkins, the general director of the Seattle Opera, was in the audience and arranged a Seattle engagement soon after, in Donizetti’s “Lucia di Lammermoor.”

“I had never heard the duet in Act I in that opera with a final high E flat for the tenor,” Mr. Jenkins wrote in a recent e-mail message. “Marcello was spectacular throughout, lyric yet very strong, clearly a tenor on the way to big lyric parts.”

For several seasons running, during the tenure of David Gockley as general director of the Houston Grand Opera, Mr. Giordani had a home there. (Mr. Gockley has since moved on to the San Francisco Opera.) With Mr. Gockley’s encouragement Mr. Giordani branched into heavier roles, including Manrico, the minstrel-warrior of Verdi’s “Il Trovatore,” under strained personal circumstances.

“One of Marcello’s sons was unhappy at his father’s long absences from home,” Mr. Gockley said recently in New York. “There was tremendous pressure on Marcello to go home and console him. Instead he brought the boy to Houston. The performance was a triumph. I was very grateful to him for staying the course.”

Mr. Giordani, for his part, remains grateful to his many American champions. “I was lucky to start in this country,” he said. “Theatrically I am self-taught. The Italians are not indulgent, as Americans are. They don’t have the patience to teach young singers how to move. They think you should learn in school.”

The nuance of a Ralph Fiennes is hardly required, but within operatic parameters Mr. Giordani today holds his own as a capable, modern actor: at ease onstage, especially comfortable in costume drama yet devoid of affectation.

“It was my good fortune that I got patient directors and conductors,” he said. “Slowly, step by step, I learned positions, postures, how to follow the beat. It was very hard. But I had the patience to watch everything, even the supers. I was like a thief, stealing everything I could to be good. Sometimes even now I go to see colleagues onstage and steal ideas.”

And the next generation is learning to steal from him. In November the Manhattan School of Music presented Mr. Giordani’s first master class. Particularly revealing, in view of the impromptu Met “Rigoletto” the next week, was a segment with a young tenor who came in with “Questa o quella,” the Duke’s paean to free love. The student zipped through it with all the panache of the proverbial deer caught in the headlights.

“Beautiful,” Mr. Giordani said, “but you can do better.” He sang the aria himself, illustrating fillips of rhythm and accent that lend the song brilliance. More useful, he prescribed a rakish laugh between phrases where the words imply it and showed just how to boost the money note at the end. Nothing crass, just with authority.