CHICAGO — As the principal percussionist of the Chicago Symphony Orchestra, Ted Atkatz had reached a pinnacle in his profession. 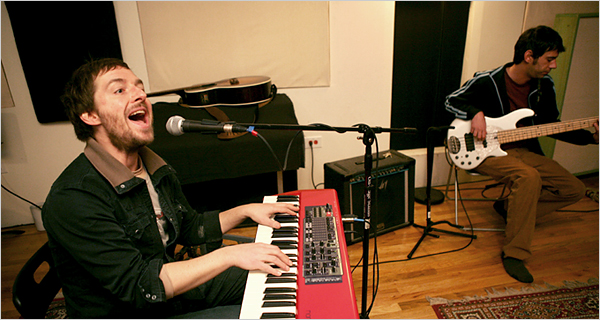 He had tenure in one of the world’s great musical institutions, with a fat salary and benefits. Stagehands set up his battery of instruments. Touring meant luxury hotels and per diems. And he had, just as precious, the respect of the percussion world, a singularly obsessive group of musicians who play the triangle, the bass drum and everything between.

But in May, Mr. Atkatz pulled a modern-day Don Quixote. He quit his job to devote himself full time to his alternative rock band. He now plays in joints across the Midwest, sometimes performing for the bartender or, on a good night, several hundred people. Orchestra Hall? Carnegie Hall? The Musikverein in Vienna? Forget it. Try the Mousetrap in Eau Claire, Wis., or Beaner’s Central in Duluth, Minn.

Mr. Atkatz says he doesn’t regret his decision. “I wanted to make sure that every time I played, I wanted to be passionate about it,” he said. “Based on that criterion, it was a no-brainer.”

The highway between classical music and pop is well traveled. Pop musicians like Frank Zappa, Paul McCartney and Elvis Costello have made forays into the classical arena, often to a less-than-friendly reaction from critics. And many classical musicians play pop or jazz on the side. But it is rare for an orchestra musician to abandon the classical realm for a career in rock.

It is even rarer for someone of Mr. Atkatz’s stature to do so. Principal jobs like his seldom come up, and more often than not members of an orchestra like the Chicago Symphony stay on for decades. “The people who don’t know him personally probably think he’s insane,” said Brant Taylor, a Chicago Symphony cellist.

Indeed, these days Mr. Atkatz has become his own stagehand, lugging keyboards and guitars into clubs, where the intermission drink of choice comes from a tap, not a Champagne bottle, and where the fragrance is stale Coors, not Chanel. Sometimes his nightly take barely covers gas and meals. Instead of fancy hotels, the band’s red minivan is where he often sleeps. He survives on money from teaching percussion. His income is about $45,000 a year, less than a third of what he used to earn.

The band is called NYCO, an acronym based on “New York,” where Mr. Atkatz is from, and “Colorado,” the home of a co-founder. It is one of thousands of little-known groups vying for recognition from risk-averse labels, corporate-owned radio stations, tightwad club owners and listeners in a world of fewer and fewer record stores.

Mr. Atkatz is a slight man with a patchy beard, modestly shaggy hair and an open, mellow air. He does not like to discuss his age in a youth-obsessed industry, but he looks to be in his 20s — a decade younger than the reality. He is well aware of the difficulties ahead, admitting: “There’s always some doubt that creeps in: ‘Is this long shot really possible? Can I make the N.F.L.?’ Those are the kind of odds that you are up against.”

His first album, mysteriously named “Two” (it’s about relationships, often troubled ones), has received modest play on local radio stations and some reviews. “This is some seriously well-crafted rock music,” Chicago Social Magazine wrote. It has sold about 1,800 CDs (many in clubs after shows), and Mr. Atkatz counts 3,400 individual downloads.

The songs are all original, with Mr. Atkatz, who sings and plays keyboard, as writer or co-writer. He is at work on a second album, which he hopes to release in April.

Mr. Atkatz has key friends helping out. Jon Seymour, an Internet entrepreneur with a Web advertising and local search site, getfave.com, helps with marketing. Carlos Segura, a former neighbor and prominent graphic designer, has lent a hand with logos and album production. The veteran producer Jim Tullio, who worked with the Band, Mavis Staples and Aretha Franklin and whose albums have twice won Grammys, said he took on Mr. Atkatz after listening to a demo tape sent out of the blue. “I loved the music,” he said.

During a typical day in late January, Mr. Atkatz met with Mr. Segura and later a fave.com producer to discuss ideas for a music video to post on the site. Next up was a rehearsal at a North Side studio, followed by a drive to Winnetka, Ill., for a mixing session with Mr. Tullio.

At the rehearsal, Mr. Atkatz sat at the keyboard. He sang, often in falsetto, with his lips nearly touching the microphone. His head rocked back and forth atop his hunched shoulders. He yelled out instructions — “D sharp!” — and asked his bandmates to “rock out more” at one point. He gave frequent encouragement — “Awesome!” — and had a firm grasp of what he wanted but was open to ideas. “I’m cool with that,” Mr. Atkatz said about a proposed guitar solo.

Mr. Atkatz’s decision to walk away from the Chicago Symphony shocked some colleagues, particularly the old-timers “who hold on to the orchestra as if it’s their lifeblood,” Mr. Atkatz said. “They’re looking at me like I’ve committed adultery.” One longtime member even stopped speaking to him, he added.

But others cheered him on, including Daniel Barenboim, then the music director.

Many fellow players admired him for such a gutsy move. “He made the only choice he really could make,” said Mr. Taylor, the cellist. “He probably always would have regretted it if he said, ‘I’ll forget the band and do the orchestra because it’s the safe way to do it.’ That’s not his M.O., to do it the safe way.”

Jim Ross, another percussionist in the orchestra and a good friend, said he missed Mr. Atkatz’s mischievous streak. Once, during a rehearsal of Ravel’s “Boléro,” Mr. Barenboim came over to the snare drum and began tapping out the solo with his finger. Mr. Ross said, “Ted runs up to the podium and starts conducting the orchestra.” (“Boléro” was Mr. Atkatz’s last Chicago Symphony performance, at the Ravinia festival last summer.)

In truth, classical music was not Mr. Atkatz’s first love. Growing up in Fresh Meadows, Queens, he studied drumming at a community music school, where his teacher began slipping in orchestral excerpts. He played in his first rock band in sixth grade.

He grew serious about percussion at the Manhattan School of Music preparatory division, graduated from Benjamin N. Cardozo High School and received a music degree from Boston University. He studied at the New England Conservatory of Music in Boston, and began taking auditions seriously. In 1997 he won a job in the Chicago Symphony percussion section, moving up to principal three years later.

All through his college and graduate years, he played in bands. At the symphony he found a fellow traveler, Robert Kassinger, a bass player and active jazz musician. They formed NYCO and worked on the first album.

Soon, Mr. Atkatz said, the sense of routine clock-punching that afflicts many orchestra players began creeping in. “It’s easy to lose sight of the big picture of what music is about,” he said. “It’s kind of liberating to escape from that world.”

Mr. Atkatz said he was approaching his new career in the same spirit that won him his Chicago job: performing with utter conviction, as if he belonged. “Something is going to happen,” he said. “I actually think the music is going to reach people.”

Saw that article at the Times.

He did what he wanted to; great!

Back in the 1960's Art Tripp abandoned his position in the battery of the Cincinnati Symphony to join up with Frank Zappa and Captain Beefheart.
Top

Good for him! If your heart's not into it, why bother?

pop music will be better for it.

david johnson wrote:pop music will be better for it.

Now he gives them a stand-up routine in L.A.

And he loves it! I have respect for people who prefer to do what they want instead of what they can get money for. Mozart is a good example(even though he tried to get money, he still kept doing what he wanted when he realised that he wouldn't get any).

The moral of the story is that orchestras need to perform more contemporary music in order to properly utilize the talents of their percussionists and retain their services for orchestral music.
Black lives matter.
Top

diegobueno wrote:The moral of the story is that orchestras need to perform more contemporary music in order to properly utilize the talents of their percussionists and retain their services for orchestral music.

I don't think that approach is necesary for a job retention issue that doesn't actually exist.

Can I have his old job?
Paul Stonebraker - Promoting orchestral music since '06
Top

? What are you even talking about? All I said was, "He's still a loser." Wow.
Paul Stonebraker - Promoting orchestral music since '06
Top

When someone's truly passionate about doing something, the regret they'd feel for not doing it would be much worse than the bad finnancial situation Atkatz put himself into. Most people would rather put up with the regret of not reaching for their dreams if their dreams were too risky, required too much suffering, or weren't financially wise. The fact that Atkatz did in fact chase his dream in spite of these inconveniences... I'd presume that's why you seem so proud of him, Arnstein?

But I'm not sure most people have that kind of dream, so they wouldn't be able to understand. If they can't understand, then it's futile to try arguing with them.
Top

I agree that he does what he wants to do, and he seems to be happy.

Users browsing this forum: No registered users and 4 guests