A Fitting Monument to the FDNY's 9/11 Dead

A Fitting Monument to the FDNY's 9/11 Dead 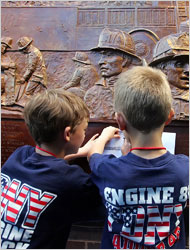 There is that instant of horror to be relived, forever frozen in bronze. There are scenes of valor and camaraderie to be celebrated. But more than anything, there are names to be touched and traced: the Fire Department's 343 dead.

The first large-scale 9/11 monument at ground zero — a bold, literal and almost neo-Classical 56-foot-long bronze relief dedicated to the firefighters "who fell and to those who carry on" — was unveiled today on the side of "10 House," the home of Engine Company 10 and Ladder Company 10, across Liberty Street from the World Trade Center.

In unison, members of the two companies removed six flag-bedecked panels that had been hiding the mural, then marched slowly away, revealing the full panorama, centered on the flaming towers, with heroic and humbled firefighters on either side.

Within moments of its unveiling, family members and firefighters in dress blues were on their knees at the mural, tracing the inscribed names of those who died on Sept. 11, 2001, arranged by rank, from First Deputy Commissioner William M. Feehan to Paramedic Ricardo J. Quinn.

"I wish his name was not on that wall," said Miriam Juarbe, the mother of Firefighter Angel L. Juarbe Jr., as she clutched the tracing she had just made. "He made us proud. He gave too much."

Brian D. Starer, vice chairman of the Holland & Knight Charitable Foundation, which raised the money for the monument, said he had found a 12-year-old boy making a tracing who told him, "This is all I have of my father."

President Bush, appearing in a videotaped message shown at the opening of the ceremony, said, "The time for mourning may pass, but the time for remembering never does." Former Mayor Rudolph W. Giuliani, who was present, said simply, "It's very hard coming here."

Remembrance was the theme of the morning. Peter E. Hayden, the chief of the Fire Department, pointedly noted the absence of an official memorial across the street, on what he called "holy ground."

"We've had empty promises from empty suits," Chief Hayden said, "but the Fire Department has fulfilled its promise."

The ceremony coincided with the fourth anniversary of the Fire Department's cessation of recovery operations at ground zero, though the monument is not quite complete. It is framed, as intended, by nine lighting fixtures, but the 11 paving stones for its base have yet to be installed, pending city approval. These are to be of the same garnet-flecked Adirondack granite as the Freedom Tower cornerstone.

Since crowds are already a constant at "10 House," the quarters of Engine Company 10 and Ladder Company 10, the monument is likely to become an instant landmark.

But its creators envision a more distant horizon.

"This is a 100-year monument," said Harold Meyers, assistant chief of the Fire Department and the Manhattan borough commander. "We wanted it to tell a story. One hundred years from now, we want you to look at this and say, 'This is what happened.' "

In the central panel are the flaming towers, caught at the instant when the second jetliner hit on the morning of Sept. 11, 2001. Flanking it are scenes of firefighters laying down hose lines, a weary firefighter reaching up from a curb, a fireboat on the horizon.

They are composed in exacting detail. Chief Meyers made sure of that. A chief at the temporary command station is wearing his regulation F.D.N.Y. tie clip. Some firefighters have chocks — door-opening wedges — strapped to their helmets.

Below the main relief are two long panels inscribed with what Fire Commissioner Nicholas Scoppetta called a "silent roll call," the names of the dead, arranged by rank, from First Deputy Commissioner William M. Feehan to Paramedic Ricardo J. Quinn.

"We've done it in a fashion that, as you kneel down, you can take a piece of tracing paper and trace that name," said Brian D. Starer, vice chairman of the Holland & Knight Charitable Foundation, which raised the money for the monument. "It's going to mean a lot."

Because so much labor and material was donated, Mr. Starer said it was impossible to put an exact dollar figure on the project. "This is a million-dollar memorial that didn't cost a million dollars," he said.

Holland & Knight is an international law firm whose New York office is at 195 Broadway, a block from ground zero. Its central role in the firefighters' monument can be traced to the earliest days of the rescue and recovery effort, when Mr. Starer helped furnish ice for the workers on the smoldering pile.

"I like to think of this story as ice to bronze," he said.

In September 2001, his wife, Cheryl Roy Starer, immersed herself in volunteer work at a triage center in Public School 234, four blocks north of ground zero. After two or three days treating workers with deeply bloodshot eyes, for whom conventional eye drops offered no relief, she set out to create soothing ice compresses.

Mrs. Starer telephoned her husband and said: "I want you to stop what you're doing. I need ice. I'm not asking you, I'm telling you." He asked how much. "All you can get," she answered.

To pay for the ice, Mr. Starer, an admiralty lawyer, took advantage of assistance that had been offered by three international shipping executives — Thomas Hsu, Gregory B. Hadjieleftheriadis and Axel Karlshoej — to create an "ice fund" for ground zero.

After nine weeks, ice was no longer needed, but there was still money in the fund. Mr. Starer offered to buy a fire truck, but fire officials proposed instead that the money be used for a memorial.

He agreed, with the understanding that the monument would also honor Glenn J. Winuk, a Holland & Knight partner and volunteer firefighter who raced to the trade center after helping evacuate his own building. He was not seen again.

Mr. Starer approached the Rambusch Company, a 108-year-old firm that specializes in decorative metalwork, stained glass and lighting. He was drawn by the firm's experience and, not coincidentally, by the fact that its chairman emeritus, Viggo Bech Rambusch, is the brother of one of Mr. Starer's law partners.

Conjuring that Roman monument, Mr. Rambusch evoked the notion of unfolding reliefs, almost cinematic in continuity and clarity, transmitting a wartime narrative wordlessly across centuries. Further, Mr. Rambusch ordained, the 9/11 monument must be made of a noble metal: bronze.

His sons, Martin V. and Edwin P. Rambusch, worked on the project with Joseph A. Oddi, a delineator, and Joseph Petrovics, a sculptor.

Mr. Oddi sketched the preliminary vision of the monument — the burning towers already the centerpiece — during a meeting in Chief Meyers's office in December 2003 at which firefighters talked about their experiences on 9/11.

A 10-foot-long plaster model followed. Dozens of details were fussed over: how high the fireboat sat in the water, how the radio cords curled.

Full-scale panels were made in plastilene clay. At this late stage, Charles R. Cushing, a naval architect and friend of Mr. Starer, noticed that the smoke from the north tower was drifting in the wrong direction. That was revised.

Negative plaster casts were made from the plastilene. These were used to make positive plaster casts that, in turn, were pressed into a mixture called French sand. That created another negative form into which the bronze was cast, at the Bedi-Makky Art Foundry in Brooklyn.

The six-foot-high, 7,000-pound mural arrived in Manhattan on May 19 in two 24-foot-long side sections and an 8-foot-long central section.

It was put up overnight. Before the south panel was hoisted into place, the installation crew and the firefighters from "10 House" were invited to write messages on the back with paint pens. Some offered sentiments like "I'm here with you" or " 'Til we meet again." Others enumerated their friends who died that day — six names, seven names, eight names.

And those sentiments are meant to stay private and personal. "I hope," the chief said, "no one ever gets to see the back of it."

Great article, Ralph. Thanks for the pics too.
Corlyss
Contessa d'EM, a carbon-based life form

Thank you for posting this, Ralph. I'd like to go see this monument some day.
Top

I think for me one of the most devastating things I heard or saw (on TV) that day was that both the fire chief of the greatest fire department in the world and his chief assistant had given their lives in the disaster. Somehow that got to me more than the enormity of the rest of it.
There's nothing remarkable about it. All one has to do is hit the right keys at the right time and the instrument plays itself.
-- Johann Sebastian Bach
Top

miranda wrote:Thank you for posting this, Ralph. I'd like to go see this monument some day.

It would be my pleasure to take you there.

Why Ralph, I'd be honored. It would be great to meet you, if you'll consent to hang out with a troglodyte (in jbuck's words) who listens to and enjoys select forms of rap music.

This really sounds like a beautiful monument, in the midst of one of my favorite cities........
Top

miranda wrote:Why Ralph, I'd be honored. It would be great to meet you, if you'll consent to hang out with a troglodyte (in jbuck's words) who listens to and enjoys select forms of rap music.

This really sounds like a beautiful monument, in the midst of one of my favorite cities........

I don't discriminater against people who listen to rap music. I just turn the volume on my Discman higher so the glory of Dittersdorf wipes out anythinjg else.