Is he mostly remembered for a couple of works or is there a consistent level of quality in his orchestral, chamber, and instrumental production?
This old aristocrat was quite conservative, of course, but produced some very colorful pieces. Did you know that Montreal's principal classical music school is named after him?

In any case, do share your favorite d'Indy works.
In the eyes of those lovers of perfection, a work is never finished—a word that for them has no sense—but abandoned....(Paul Valéry)
Top

Although I have tried, his works, other than the colorful and somewhat popular Symphony on French Mountain Air, leave me cold. Much like Franck. They are certainly enjoyable but are not all that memorable. The Chandos Series with Rumon Gamba and the Iceland SO is a good way to explore some of the more obscure D'Indy.
Great spirits have always encountered violent opposition from mediocre minds. - Albert Einstein
Top

Hmmm. Little traction.
In the eyes of those lovers of perfection, a work is never finished—a word that for them has no sense—but abandoned....(Paul Valéry)
Top

Actually, I think Vincent d'Indy is no different from Haydn and Mozart: producing good formatted music, sound sounds, excellent symmetry and great structural architecture, everything falling into place as it should.

In the eyes of those lovers of perfection, a work is never finished—a word that for them has no sense—but abandoned....(Paul Valéry)
Top

The final movement of his Sextet, op. 92, is a fine, very fine piece of work, in the best vein of classical tradition. Mozart would have been proud of it!
In the eyes of those lovers of perfection, a work is never finished—a word that for them has no sense—but abandoned....(Paul Valéry)
Top

The 'Symphony On A French Mountain Air' is a gorgeous piece for piano and orchestra. The classic Henriot-Schweitzer/Munch RCA recording is simply fabulous.
Other d'Indy beauties are 'Istar', an orchestral set of variations which does not reveal the main theme till the final section and the massive Symphony No. 2. The 2nd Symphony is brilliantly performed by the great Pierre Monteux and the San Francisco Symphony on RCA. A great 1945 recording.

Well known, Stenka, at least I hope so. I would recommend his Fantaisies sur des Themes Populaires Français as a bit of a surprise for this Wagner lover. Opus 31, that is. Vigorous, lyrically French, surprisingly CMG out of the closet....
In the eyes of those lovers of perfection, a work is never finished—a word that for them has no sense—but abandoned....(Paul Valéry)
Top

My favorite work is "Istar", a tone poem with a remarkable orchestration. I only know one version, conducted by Pierre Dervaux (EMI).

piston wrote:Actually, I think Vincent d'Indy is no different from Haydn and Mozart: producing good formatted music, sound sounds, excellent symmetry and great structural architecture, everything falling into place as it should.

Is that really your opinion of Haydn and Mozart...?!

At least Mozart's music contains a great deal of passion and drama.

I only have one disc of his work....one of piano minitures, but I like it a lot.
Top

val wrote:My favorite work is "Istar", a tone poem with a remarkable orchestration. I only know one version, conducted by Pierre Dervaux (EMI).

Istar is one of my favorites too, but what's not to like. It depicts a beautiful woman taking off all her clothes. Let's hear it for programmatic music! Now where's the video?

Besides the Dervaux on EMI, which I have, there's an old Monteux recording and a new digital one on Chandos with Rumon Gamba who is apparently recording all of d'Indy's orchestral music.
Top

Two beloved D'Indy discs I own: 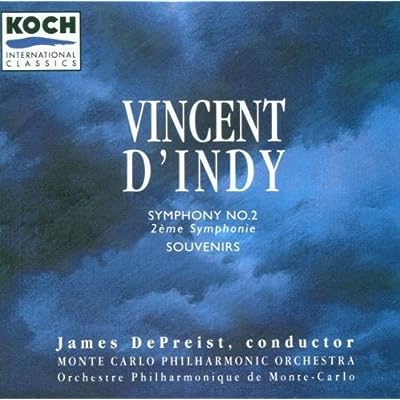 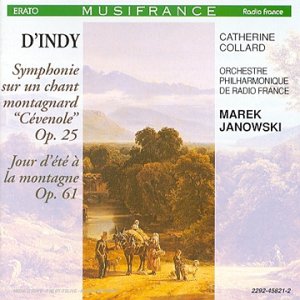 Have started a bit of a d'Indy binge after chancing upon the old Ciccolini/Cluytens recording of D'indy's famous piece for piano and orchestra.

Listened to two lesser know pieces by d'Indy in the Gamba/Island series, La Loret enchantee and Souvenirs. The first is like a cross between Bax and Wagner. Forest elves, and such, then some horns start playing and it sounds like a few pages from Siegfried got mixed in with the orchestral parts. Despite my weak little joke, it is beautifully written, engaging music, and Gamba/Iceland create a wonderfully atmospheric performance.

The other piece, Souvenirs, is the more profound work. It is a series of reminiscences summers holidays spent with his wife, written after hear death. The opening section is one of the most sincere musical expressions of grief that I can remember. Poignant but not maudlin. The noble theme representing his wife is interrupted by more joyful episodes. The overall effect is quite moving.

I will go on to explore more d'Indy, and just realized that I have this 3CD set in my collection, that I seem to have picked up as an overstock, but never listened to. 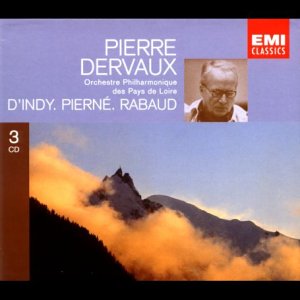 I've 3 string quartets, piano trio 2 and piano quintet. All beautiful pieces that should be listened and played more often.
Top

In an old (ca 1950) biography of d'Indy, Léon Vallas mentions the following anecdote:

d'Indy travels to the USA in 1921. He brings, amongst other works, the brandnew symphonic suite," Le poème des rivages" with him. Actually, the worldpremière is not for Paris, but for New York. d'Indy is the conductor.
Other cities that he will visit: Boston and Cincinnati.

In Cincinnati he is welcomed by Eugène Ysaÿe, then chief conductor of the Symphony Orchestra.
d'Indy's score calls for 3 saxophones...which the Cincinnati orchestra does not have! Somehow, apparently, Ysaÿe manages to find three black musicians with the required saxophones.
When d'Indy starts to rehearse he discovers quickly that these men do NOT read music, yet play their parts more than admirably! "Jamais je n'ai entendu de si bons saxophonistes, tenant mieux leur rôle...".I never heard beter saxophone players!

Vallas does not tell who "taught" them the music , "il fallut serriner leur partie" : they were taught their parts "orally" , someone sang or hummed, repeated the music to them. "Ils s'en tirèrent admirablement".

"Poème des rivages" has 4 movements.
Calme et lumière: the sea near Agay, bright sun.
Joie du bleu profond: near the Spanish isle of Majorca. Springtime. The sea is a very deep blue.
Horizons verts: near the Adriatic coast. Falconara. Rain. Dull light. The sky and the sea turn green.A train can be seen and heard on the Italian coast.
Mystère de l'Océan: the bay of Gascony. The sky is low and mysterious. The waves become menacing. suddenly it is night and everything becomes calm.
Top
Post Reply
16 posts • Page 1 of 1