Only one of my favourite filmmakers! I couldn't read the article as it was behind a paywall (if you'd like to cut and paste).
Top

Note: Some of the links to Pierre-Auguste's paintings and to Jean's two complete silent movies were added by me. Also the link to the commentaries on “A Day in the Country”, “Grand Illusion” and “The Rules of the Game.”

PHILADELPHIA — “I think that a great painter is even rarer than a great film director,” Jean Renoir said. It was 1967, and that French filmmaker was sitting on the bank of the river Ource, amiably chatting during the making of a documentary by Jacques Rivette, a New Wave director who idolized Renoir’s “Grand Illusion,” “The Crime of Monsieur Lange” and the masterpiece “The Rules of the Game.”

Richard Brody discusses “The Rules of the Game.”
https://video.newyorker.com/watch/the-rules-of-the-game

But unlike the New Wave’s auteurs, Renoir (1894-1979) had his doubts about cinema’s importance. Because of the medium’s limits, he told Rivette, a film could never fully express a single vision. Only a painter could “find the relationship between eternity and the instant, between the world and the soul.” Filmmakers were cursed to be technicians. Painters, Renoir concluded, “are the great philosophers of our time.”

He was exaggerating, but he knew what he was talking about when he compared art and cinema, for he was the son of a painter: Pierre-Auguste Renoir, the Impressionist who depicted revelers at the Moulin de la Galette and, later, Rubenesque nudes that were loved less.

Jean Renoir did not always treasure his father’s paintings; early on, he may have principally appreciated them for the money he made selling them to fund his films. Yet, eventually, after moving to Los Angeles, he spoke of Pierre-Auguste Renoir as the central influence of his life, which he elaborated on in the genial memoir “Renoir, My Father.”

The place of one Renoir in the career of the other is the subject of “Renoir: Father and Son/Painting and Cinema,” a terrific, heartfelt exhibition now on view here at the Barnes Foundation. Though the show seriously considers the interplay of media, this is largely an exhibition about Jean Renoir, and about cinema. There are just 16 works by Pierre-Auguste Renoir; the museum’s own 181 Renoir paintings remain on their traditional yellow walls, according to the terms of the will of Albert C. Barnes, the foundation’s founder. The galleries are filled instead with projected clips from “A Day in the Country,” “The Diary of a Chambermaid” and more than a dozen other films by the younger Renoir, as well as stills, posters, correspondence and costumes. (The show was curated by Sylvie Patry, a deputy director at the Musée d’Orsay in Paris and a veteran of the Barnes. It travels to the Orsay in November.)

As a boy, Jean Renoir did not have a close relationship with his father. As in many bourgeois households in fin-de-siècle France, Jean’s mother and the domestic staff looked after him and his two siblings, while his father was largely out of sight. Pierre-Auguste Renoir was known not as “Papa” but as “Patron,” or “the boss” — the same nickname Rivette and other New Wave directors would later apply to his son.

The boy’s most consistent contact with his father would have occurred while he was posing for him, and there are half a dozen paintings of young Jean in this exhibition. In a portrait from 1903, the 9-year-old son appears with a jaunty red foulard tied about his neck; as is so often true of Renoirs, the oil paint looks like pastel, and Jean’s hair has the delicacy of spun silk. (In the same gallery, we see the 60-something Jean Renoir posing with that childhood portrait for a feature in the magazine Paris Match.)

Father and son got to know each other well only during World War I, when Jean came home to Montmartre after being shot in the leg during combat. The men appear here in a 1916 photograph taken by the artist Pierre Bonnard: Pierre-Auguste sits in a blanket-draped wheelchair, staring into space, while Jean, in military uniform, sits proudly behind him.

The younger Renoir also had ambitions in visual art, and started out as a ceramicist in the early 1920s. One of his only buyers was Dr. Barnes, and this show includes more than a dozen of Jean Renoir’s unremarkable vases and bowls, painted with a Cézannesque palette of greens, yellows and blues. He soon accepted, though, that his life lay in cinema, and made two intriguing silent films with his first wife, Andrée Heuschling. Under the stage name Catherine Hessling, she starred in the ethereal “Whirlpool of Fate” (1924) and then in “Nana” (1926), an adaptation of Émile Zola’s novel, in which she plays a smooth operator of the Second Empire.

She had previously modeled for more than a hundred of Pierre-Auguste Renoir’s late paintings, including “The Bathers,” a splashy discharge of flesh and grass completed in 1919, the year he died, and lent to this show from the Orsay.

Yet it was in early sound cinema that Jean Renoir would make his deepest mark. In “La Chienne” (“The Bitch”), from 1931, he sent up the Paris art world by having a pimp offer an amateur’s portraits at one of the best galleries in town. “A Day in the Country” (1936), by contrast, is soaked in Impressionist light effects, especially in the lyrical sequence of a woman standing on a swing as it climbs ever higher, the camera swaying with her. This is a rare case of Renoir’s filming en plein air, as his father painted. It’s projected here in the show’s first gallery, just before you encounter Pierre-Auguste Renoir’s “The Swing” (1876), one of the finest of the artist’s Impressionist paintings. 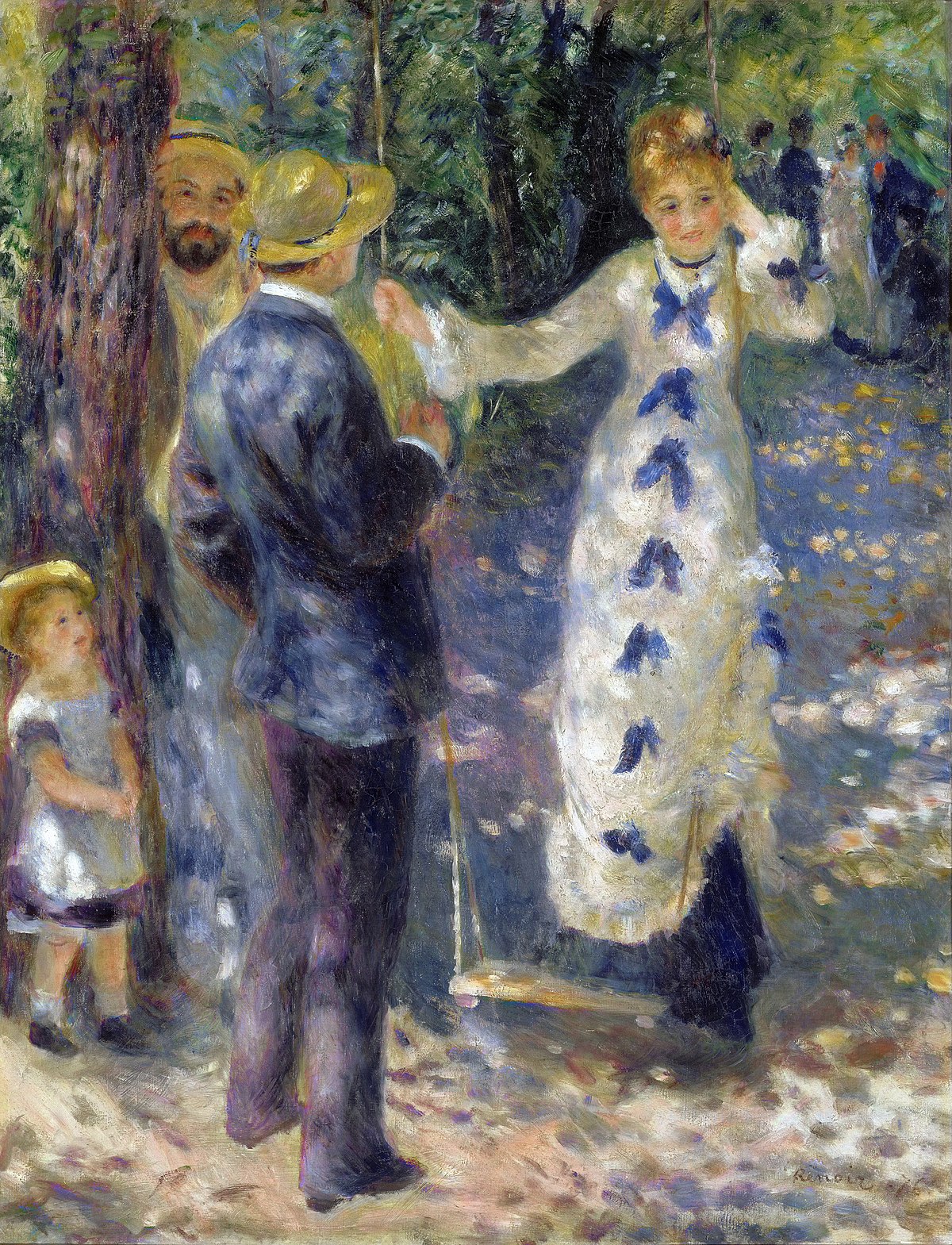 Also from “Renoir: Father and Son/Painting and Cinema,” Pierre-Auguste Renoir’s “The Swing,” from 1876.Jean Renoir’s film “A Day in the Country” (1936), is soaked in Impressionist light effects, in the lyrical sequence of a woman standing on a swing. He filmed en plein air, as his father painted.CreditMusée d’Orsay, Paris

Renoir at Work: "A Day in the Country"
https://www.youtube.com/watch?v=oaRajFYJT2E


Jean Renoir held onto just one of his father’s works his whole life: “Jean as a Huntsman” (1910), which traveled with him to California, and which he left to the Los Angeles County Museum of Art. In it, the 16-year-old Jean appears in a belted shooting jacket, a beagle at his feet; his father has painted the blue of his son’s outfit with shifting red and purple undertones that recall the work of Edvard Munch. It hangs here, in one of the show’s most cunning moves, across from a still from “The Rules of the Game” (1939), whose hunting sequence is both a landmark of technical acuity and a devastating portrayal of the French aristocracy. Jean Renoir, in the role of the scrounging failed conductor Octave, stands proudly in his country tweeds, staring at his younger self.

“Jean as a Huntsman,” 1910, an oil on canvas by Pierre-Auguste Renoir that is in the show “Renoir: Father and Son/Painting and Cinema.” His son Jean Renoir was the model.CreditLos Angeles County Museum of Art

Focusing on Jean Renoir’s family inheritance means that this show overlooks some of the director’s most important accomplishments. The great antiwar film “Grand Illusion” (1937) is totally omitted. His precise editing — whether in the flawless light touch of “Boudu Saved From Drowning” (1932) or in the rapid cuts of the hunt in “The Rules of the Game” — is also minimized in a show that places more importance on images than on movement.

And the Barnes, perhaps unaccustomed to multimedia presentations of this sort, has botched some of the projections. “The Rules of the Game” is screened in a dreadful copy of sub-YouTube resolution, with the night sky over Octave and his wealthy friend Christine pixelated into splotches of grays and black. Only some of the projections have sound, not always fully audible. The locomotive of “The Human Beast” (1938), so resonant of Monet’s paintings of trains at the Gare Saint-Lazare, churns here silently.

Still, the search for the rhyming of the father’s painting and the son’s cinematography reveals the power of later, less celebrated films in color — among them “Picnic on the Grass,” which was shot on the grounds of the elder Renoir’s home on the Riviera. “French Cancan,” an accomplished, if syrupy, musical of the Moulin Rouge, brings the exhibition back to Pierre-Auguste Renoir’s Montmartre, though Toulouse-Lautrec was a greater influence on its sequences of high-kicking dancers and absinthe-swilling patrons. And “The River,” filmed on location in India, is projected in the final gallery here (again, with iffy sound); two lovelorn women sitting on a swing harken not only to “A Day in the Country” but also to his father’s original Impressionist vision. This is cinema that takes inspiration from painting but transcends it, too.

Although this is Jean Renoir’s show, it also serves as a reassessment of Pierre-Auguste Renoir, whose later works faced disparaging reviews as early as the 1920s. (In recent years, especially, juvenile internet parodists who blare the slogan “Renoir Sucks at Painting” have even staged mock protests outside of museums.) At the Barnes, which owns the world’s largest collection of Renoirs, it can be easy to tire of his soft, honey-hued paintings of undressed women. Yet his interweaving of classical motifs with the flat representations of Modern painting were more than a direct influence on Picasso and Matisse; this show insists that they were decisive, too, for the maturing of French cinema.

“I have finally watched my films again at home,” Jean Renoir said toward the end of his life, “and I have to admit that I have always imitated my father! That’s all I have ever done.” Could he not see that he had done so much more than imitate, that he had transformed his medium in ways even more profound than the elder Renoir did his?

Think back to “The Rules of the Game,” in which Octave explains that he loves Christine partly as a tribute to her father, a conductor of towering importance whom he idolizes but cannot equal. Some shadows, it seems, you never get out of, even when you have mastered the art of light.

Renoir: Father and Son/Painting and Cinema
Through Sept. 3 at the Barnes Foundation, Philadelphia; 215-278-7000, barnesfoundation.org.
Opens Nov. 6 at the Musée d’Orsay, Paris.
Top

A thoroughly pleasurable read, thank you!! I've never seen "Rules of the Game", incredibly enough, but the short of the film discussed here reminds me of the aesthetic of Ernst Lubitsch.

I was struck by the natural beauty of the woman in the screen test for "A Day in the Country" compared to the cosmetically and surgically enhanced images of post-war American film actors. The French Arletty had that natural beauty too.

This comment I could relate to: ".... it can be easy to tire of his soft, honey-hued paintings of undressed women." That's exactly how I react when to listening to much of the music of Mozart!!! And I couldn't locate the photograph of Renoir senior sitting with that rug over his knees with Jean standing behind him, as discussed in the article.
Top

Belle wrote: ↑
Thu May 31, 2018 9:16 pm
And I couldn't locate the photograph of Renoir senior sitting with that rug over his knees with Jean standing behind him, as discussed in the article.

I couldn't locate that photograph either.
Top
Post Reply
5 posts • Page 1 of 1