This is great fun to read, and completely unTimeslike.

A Poet Laureate Sends News From the End of Life
By Dwight Garner
July 30, 2018

Donald Hall, who died on June 23 at 89, was not a particularly nimble poet. His verse had a homely, bucolic, beans-on-the-woodstove quality. He was more cabbage than tulip. To borrow an analogy from baseball, a sport he loved, he was the sort of batter who got on base thanks to walks, bunts, bloopers into right field and a good deal of hustle. He was a plugger.

His poems were pleasant to hear read aloud. He was a frequent guest on Garrison Keillor’s “A Prairie Home Companion,” where he was never a Nebuchadnezzar-like destroyer of the peace. He made a memorable appearance on “This American Life,” reading a poem about his second wife, Jane Kenyon, who died of leukemia in 1995 at 47. Toward the end of his life, with his bushy beard and high forehead and rumpled sense of rectitude, Hall resembled Aleksandr Solzhenitsyn as drawn by Edward Koren.

Hall, who was poet laureate from 2006 to 2007, was stupefyingly productive. He left behind more than 20 books of poems, a dozen or more children’s books, a few plays, two volumes of short stories, textbooks, anthologies, clusters of memoirs and books of essays. One got the impression that, after a long day at his desk, he walked outside and urinated a few final poems into the snow banks around his New Hampshire farm.

Hall lived long enough to leave behind two final books, memento mori titled “Essays After Eighty” (2014) and now “A Carnival of Losses: Notes Nearing Ninety.” They’re up there with the best things he did. He apparently managed to sidestep a rendezvous with dementia, and seemed to suffer only mildly at the end from what Christopher Hitchens, quoting a friend, termed CRAFT syndrome, printable here as Can’t Remember a Fizzling Thing. These books have flat-footed gravitas, a vestigial sort of swat that calls to mind Johnny Cash’s stark final records with the producer Rick Rubin.

Which isn’t to say they are not also full of guff. About a third of “A Carnival of Losses” is threadbare and meandering, memories of dead relatives and journeys abroad and anthologies past. But the other two-thirds are good enough to make clear that Hall did not live past his sell-by date as a writer. He brings news from that moment in life when the canoe is already halfway over the waterfall.

Two paragraphs, on this book’s first page, set the tone:

In 1974, Donald Hall attended a dinner party that featured a suckling pig. “I sat beside it, shrieking with delight,” he writes, “and transferred the apple to my own mouth.”

Other indignities piled up. His false teeth tended to fly out when he spoke. He backed into his garage door again and again, forgetting to open it, once knocking it out into the front lawn. Finally he lost his driver’s license. When he fell, which was often, the fire department had to come pick him up.

Hall lived in T-shirts and sweatpants because other clothes became too hard to button, zip and pull over the head. Sweats weren’t so bad, he reasoned; they reminded him of baseball pants. To the end he smoked, or rather vaped. When he couldn’t sleep he woke up, sipped water, relieved himself into a bottle and read a paragraph in The Economist. This is an insomnia-banishing trick one might have to try.

When a dog came into the house, Hall barricaded himself, so as not to get bumped and break a hip. He ate “widower food,” Stouffer’s and Lean Cuisine. He sensed his agent was about to become his executor. He could barely read or write. “Striving to pay the mortgage in the late 1970s and ’80s, some years I published four books,” he says. “Now it takes me a month to finish 700 words. Here they are.”

He watched MSNBC when Boston Red Sox games weren’t on. He reports a dark moment in a hospital where the TV did not get MSNBC. He writes: “I got my news by processing Fox News backward.” He was mischievous, politically. When the Massachusetts Republican Scott Brown moved to New Hampshire in order to run for Senate in 2014, Hall published, in a local newspaper, the final poem of his career. It read in its entirety:

Get out of town,
You featherheaded carpetbagging Wall St. clown,
Scott Brown!

Not one for the ages, perhaps, but The Boston Globe reprinted it. Hall adds: “Somebody put it on the internet and it went bacterial.”

The poet James Merrill said that if poems are chopsticks and radishes and sashimi on a plate, prose is fish guts and cleavers. Hall does not, in “A Carnival of Losses,” wield much of a cleaver. He does not clamor for the last word in old disputes. He delivers short remembrances of writers he’s known, including Theodore Roethke, Seamus Heaney and Richard Wilbur.

His one-paragraph take on Kenneth Rexroth is typical. “I kept on admiring his poems as he kept on being nasty about me and my eastern gang,” Hall writes. “I thought of a happy revenge.” What was Hall’s idea of revenge? He wrote an essay celebrating Rexroth’s poetry in The New York Times Book Review.

It’s not as if he went to his grave a pushover. Hall was proud of his full, curling beard. When, during one of his final hospital stays, a nurse came into his room with electric clippers and tried to cut it, he reports, “I bit his hand.”

A Nebuchadnezzar-like destroyer of the peace? Where the heck did that come from? (I mean of course in the context of the article.) I never heard of Hall, but I didn't want John's post to go without any response.
There's nothing remarkable about it. All one has to do is hit the right keys at the right time and the instrument plays itself.
-- Johann Sebastian Bach
Top

Hall's introduction to poetry was very popular when I was in college textbook publishing, and he was included in the modern poetry anthology I edited, so it was no surprise when he was named American poet laureate - whatever that signifies. Not one of my favorites, but the article about him is fun to read.
John Francis
Top

He was teaching at Michigan while I was there. Cool guy, as I recall. Joyous and approachable poetry. Robert Frost with a sense of life's ridiculous. 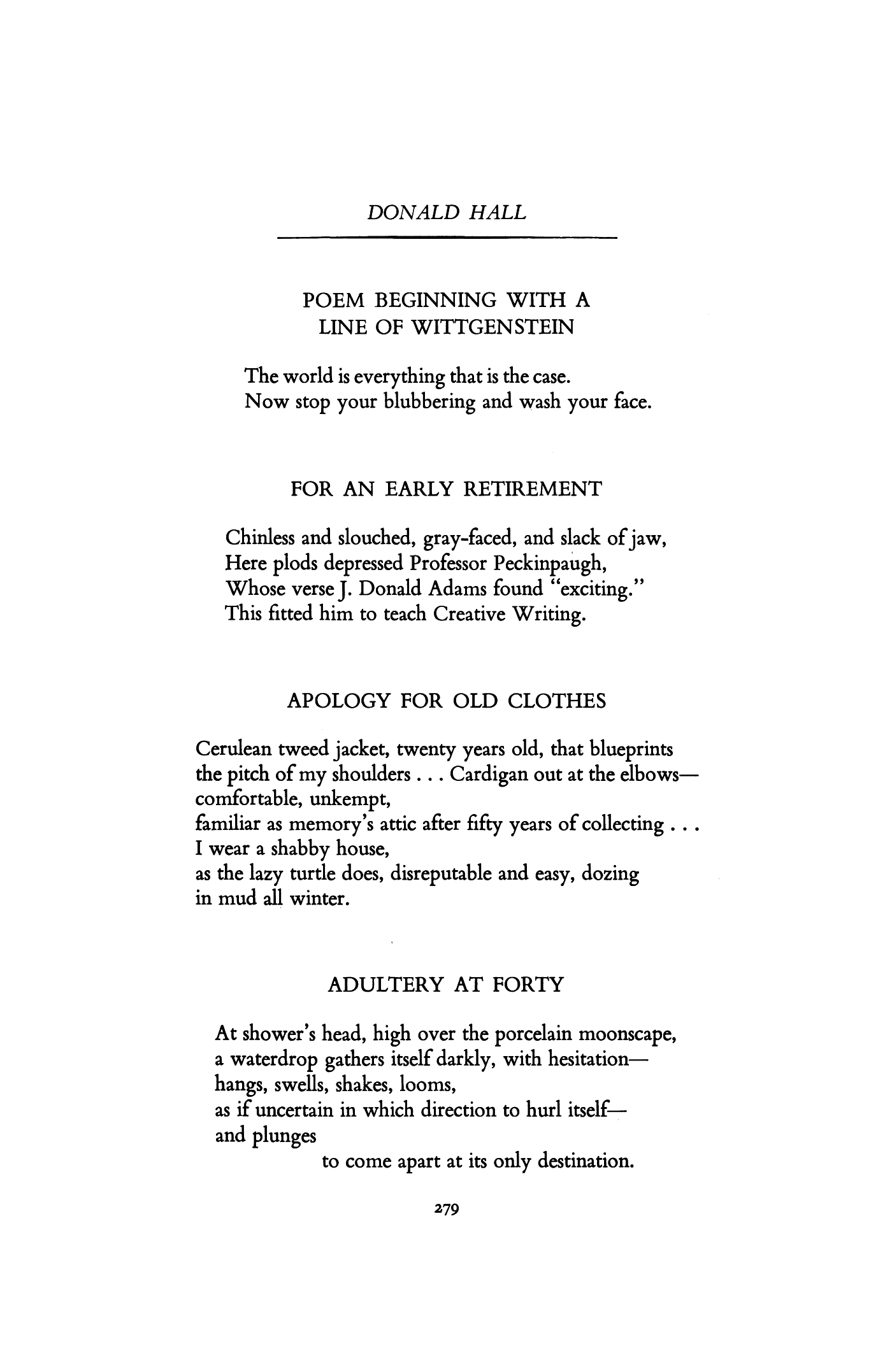 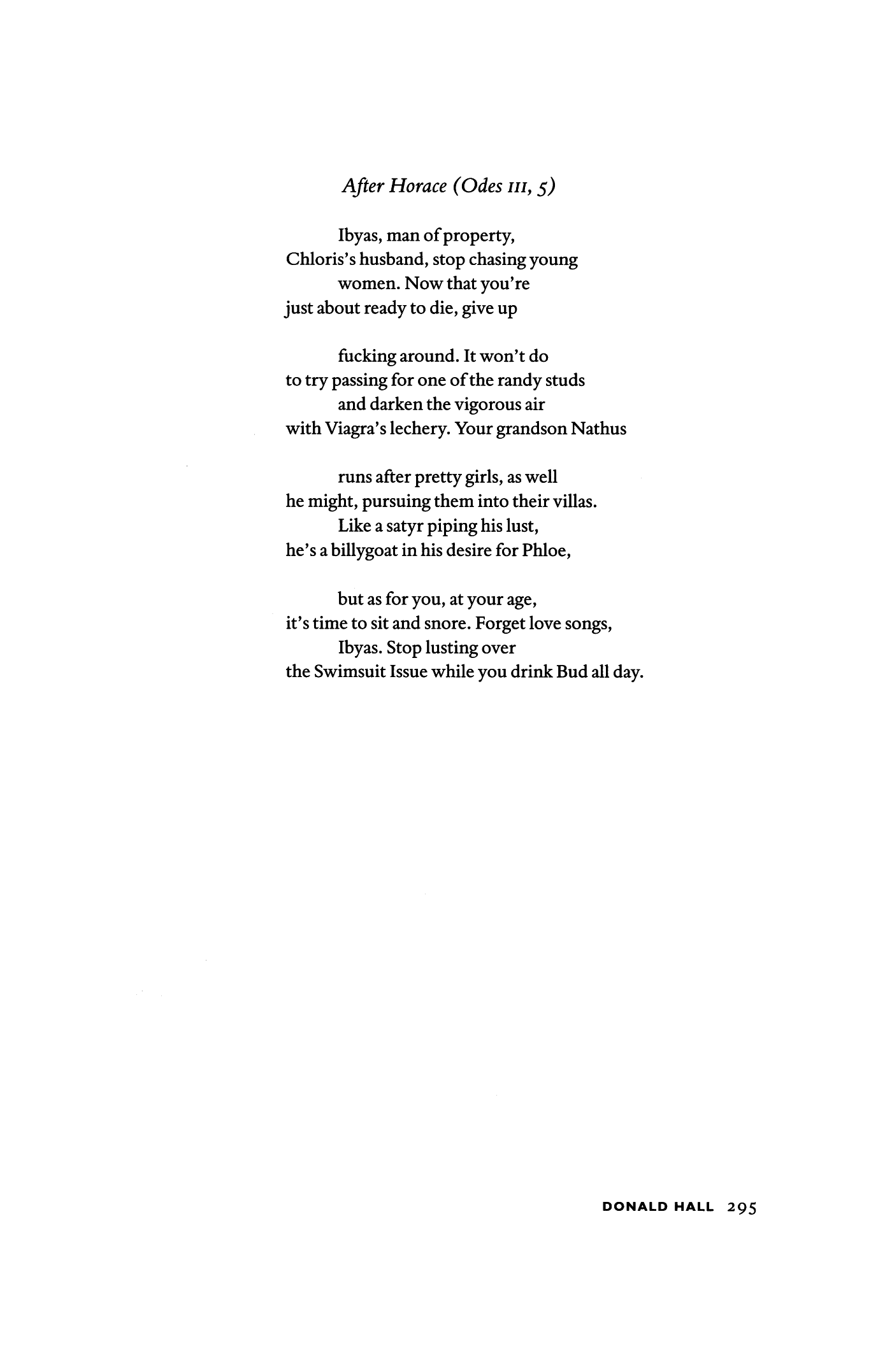 jserraglio wrote: ↑
Fri Aug 03, 2018 7:34 am
He was teaching at Michigan while I was there. Cool guy, as I recall. Joyous and approachable poetry. Robert Frost with a sense of life's ridiculous.

living_stradivarius wrote: ↑
Fri Aug 03, 2018 9:15 am
Was he snubbing Wittgenstein or using Tractatus Logico-Philosophicus in some ironic way

Without presuming to parse it, I found Hall's little couplet hilarious. William Carlos Williams with a twist of humor.
Top
Post Reply
6 posts • Page 1 of 1