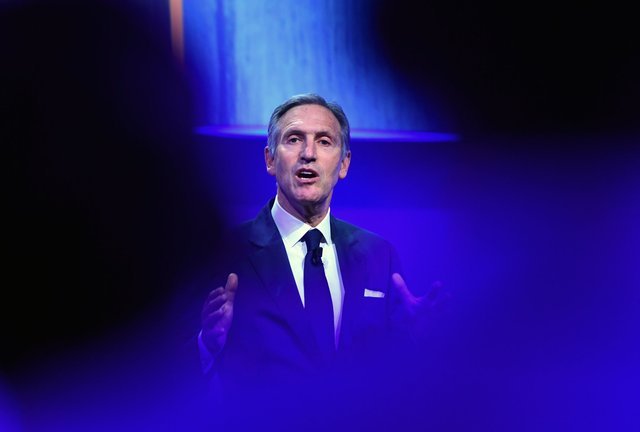 Howard Schultz, the former chief executive of Starbucks and a self-described “lifelong Democrat,” said Sunday he was preparing to run for president as an independent and had already begun the groundwork required to be on the ballot in all 50 states.

Mr. Schultz, in an interview with The New York Times, said he planned to crisscross the country for the next three months as part of a book tour before deciding whether to enter the race. A billionaire, Mr. Schultz would face a difficult road despite his considerable wealth: Few independent candidates have mounted successful challenges for the White House.

“We have a broken political system with both parties basically in business to preserve their own ideology without a recognition and responsibility to represent the interests of the American people,” Mr. Schultz said in the interview.

“Republicans and Democrats alike — who no longer see themselves as part of the far extreme of the far right and the far left — are looking for a home,” he added. “The word ‘independent,’ for me, is simply a designation on the ballot.”

Mr. Schultz was also featured in a segment on “60 Minutes” on Sunday night ahead of the publication of his new book, “From the Ground Up,” in which he criticized President Trump as “not qualified to be the president.”

The possibility of Mr. Schultz’s candidacy as an independent has drawn condemnation from Democrats, who said that an independent run would split the vote on Election Day 2020 and hand Mr. Trump a second term.

“I have two words for Howard Schultz on a potential run for president as an independent: Just don’t,” Tina Podlodowski, chairwoman of the state Democratic Party of Washington, said last week as speculation mounted about Mr. Schultz’s plans.

Neera Tanden, president of the Center for American Progress and a former adviser to Hillary Clinton, said on Twitter, “If he enters the race, I will start a Starbucks boycott because I’m not giving a penny that will end up in the election coffers of a guy who will help Trump win.”

Mr. Schultz said he was well aware of the criticism, but said it was misplaced.

“I am certainly prepared for the cynics and the naysayers to come out and say this cannot be done,” he said. “I don’t agree with them. I think it’s un-American to say it can’t be done. I’m not doing this to be a spoiler.”

Asked if he would consider changing his mind and run as a Democrat, he said, “I feel if I ran as a Democrat I would have to be disingenuous and say things that I don’t believe because the party has shifted so far to the left.”

“It’s as big of a false narrative as the wall,” he added. “Doesn’t someone have to speak the truth about what we can afford while maintaining a deep level of compassion and empathy for the American people?”

Mr. Schultz, who grew up in the public housing projects in the Canarsie section of Brooklyn, became a billionaire by building Starbucks from seven stores in Seattle into a global coffee chain with over 350,000 employees. He was known as a progressive corporate leader, offering full health benefits for full- and part-time employees and their domestic partners, and Starbucks became the first privately owned American company to include part-time workers in its stock-option program.

With an estimated net worth of $3.3 billion, Mr. Schultz, 65, is one of several billionaires who had been mentioned as possible presidential contenders.

The former hedge fund titan Tom Steyer, who had been eyeing a run, announced this month he would focus his energies on a private effort to impeach Mr. Trump. Michael R. Bloomberg, the former New York City mayor, is contemplating a presidential run as a Democrat.

Even before Mr. Schultz’s announcement, Senator Bernie Sanders and Democrats including Senator Elizabeth Warren, who has already announced her candidacy, had delivered pre-emptive strikes at billionaires, specifically citing those who self-fund their campaigns.

Mr. Bloomberg, with an estimated net worth of nearly $48 billion, has said he would self-fund any campaign. Mr. Schultz said he did expect to self-fund his campaign, and would likely seek public donations for a race that could cost more than $1 billion.

Mr. Schultz’s consideration of entering the race as an independent evokes the 1992 campaign by the eccentric Texas billionaire Ross Perot, also a political neophyte. Mr. Perot, for a time, was the leader in the polls and gained almost 19 percent of the popular vote, the most for an independent candidate since Theodore Roosevelt in 1912.

Like Mr. Schultz, Mr. Perot expressed concern about the national debt and vowed to reduce it. Mr. Perot failed to win any electoral votes.

Mr. Schultz, who pointed to a recent Gallup poll showing that 42 percent of voters identified as politically independent, scoffed at the comparisons to previous efforts of independent candidates.

“This is a very different time in America today in terms of how divided we are and the need for the country to come together,” he said. “I’ve done the work this year to unequivocally remove, if I decide to run, any concern regarding ballot access.”

Mr. Schultz is relying in part on a small team of outside advisers, including Steve Schmidt, the former campaign strategist for John McCain’s 2008 presidential effort.

Mr. Schultz’s success or failure may lie in who emerges as a top contender in the Democratic Party. If Joseph R. Biden Jr., who is seen as a moderate, decides to run, it would probably make it difficult for Mr. Schultz. However, he said he sees a clear opportunity if a far-left candidate emerges.

I have one simple question regarding running for POTUS. Is it possible (like it is in my country) for a man or woman of modest means to run for this office? The last half dozen incumbents seem to have come from a very wealthy background (Trump) or a political dynasty (Bush, Clinton). The only one who really seems to not be like this is Obama though I am unaware of his families political background.
Top

"I’m not doing this to be a spoiler.”

That may not be Schultz' intent, but it most certainly will help Trump win.
Top

"I’m not doing this to be a spoiler.”

That may not be Schultz' intent, but it most certainly will help Trump win.