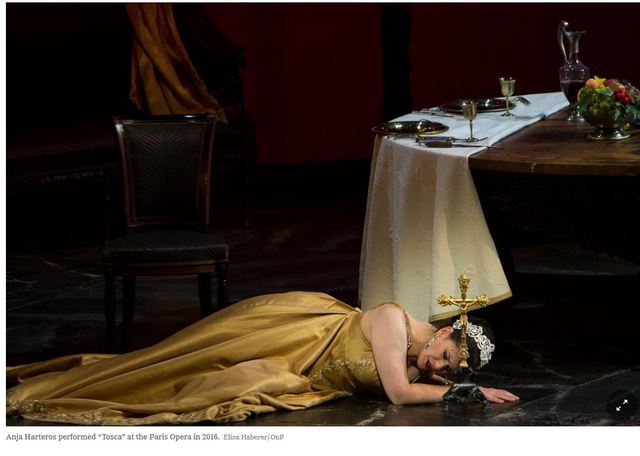 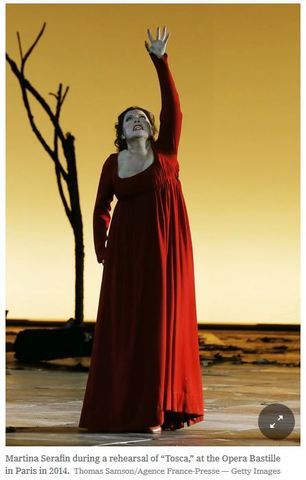 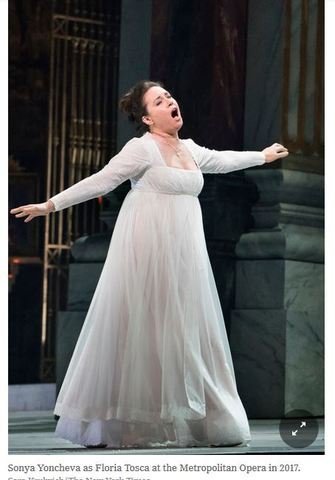 PARIS — Many 19th-century opera composers wrote roles to suit the voices and characters of their wives or mistresses. When Puccini created a tempestuous diva called Floria Tosca, however, he could hardly have imagined that the Greek-American soprano Maria Callas would someday turn his “Tosca” into one of the most popular operas.

To see footage of Callas in the role is to understand that she was Floria Tosca: her fury when her artist lover, Mario Cavaradossi, paints a portrait of another woman; her cries of “Muori!” (“Die!”) after knifing Rome’s police chief, Baron Scarpia; or her unhesitating leap to her death from the Castel Sant’Angelo after Cavaradossi’s execution.

Daring were those who competed with Callas in the role during her prime in the 1950s and 1960s. But today, dramatic sopranos — those with the range and volume for the part — line up to sing a part, which, if all goes well, earns certain ovations at the final curtain.

On May 16, Pierre Audi’s production of “Tosca” returns to the Paris Opera, running through June 23. And on this occasion, accompanied by Jonas Kaufmann and Marcelo Puente as Cavaradossi, and Zeljko Lucic and Luca Salsi as Scarpia, three renowned sopranos will sing Floria Tosca. I asked them how they approached this familiar yet challenging role.
Anja Harteros

A 46-year-old German soprano, Ms. Harteros has added “Tosca” to her repertory only in recent years but now regularly sings the role, including in Mr. Audi’s production in 2016 and just this week at the Bayerische Staatsoper in Munich.

“‘Tosca’ is a great opera because it is so short and it is such fun,” she said in a telephone interview from her home near Cologne. “Don’t get me wrong! Killing someone is not fun, but it is a joy to do it in an opera. You feel so many different emotions, but it’s always an opera so it’s a pleasure.”

Is “Tosca” credible as a story? “Yes, because the roles and personalities in Puccini’s operas are so natural, they have direct emotions,” she said. “With Verdi, Wagner and Richard Strauss, you have to think about them a long time. Puccini is clear. You do it as he has written it. That’s why so many productions of ‘La Bohème’ and ‘Tosca’ are really old because we have the feeling that they’re right.”

Does the opera pose vocal risks? “In Act 2, the aria ‘Vissi d’arte’ comes after quite a lot of physical movement,” she said, “so you have to recover your breath and become calm before you sing it. It’s a bit like after a workout when your heart is bumping even if you’re sitting calmly. What I like about Callas in Act 2 is that she’s not always the diva we expect. She’s really natural in her gestures.”

Singing opposite Mr. Kaufmann in Paris later this month will be no novelty for Ms. Harteros. They have already sung “Tosca” in Hamburg and Munich, and they have appeared together in “Lohengrin,” “Don Carlo,” “Il Trovatore” and “Andrea Chénier.”


“I love to sing with Jonas,” she said. “I think we’ll have a very special feeling in Paris.”

A 49-year-old Austrian, Ms. Serafin came late to all Italian opera because, she said, her agent felt her happiest singing in her native German. But then she married an Italian and was persuaded otherwise. Since her first “Tosca” at the Rome Opera in 2008, she reckons she has sung the role well over 100 times.

So who is her Tosca? “Tosca is a woman of very many facets. She has a very big register of emotions which makes her so beautiful to sing because she has everything a woman wants to be. She is very passionate, very female, very jealous. Tosca is a lot of different women. Any woman can see herself in Tosca. And every soprano can bring part of herself to the role.”

Like Ms. Harteros, she said the drama preceding “Vissi d’arte” created dangers. “If you have a very active Scarpia, touching you and pulling you, you automatically become more dramatic. But you mustn’t let yourself go because you might get tired and not be ready to sing ‘Vissi d’arte’ where Tosca is addressing God with the question, why?”

For Ms. Serafin, reached here in Paris after arriving early for rehearsals, Maria Callas still haunts the role. “Before Franco Zeffirelli directed my first ‘Tosca,’ he showed me film of her in Act 2,” she recalled. “‘Look how she looks at the mirror,’ he said, ‘look how she’s doing this, how she’s doing that, because it is so beautiful.’ I’ll never try to be like Callas because she was unique, but I try to learn from her.”


Tosca’s final act — leaping into the void — is one that Ms. Serafin is not eager to repeat since breaking her leg doing so in Vienna three years ago. “I used to tell directors, without jumping there is no ‘Tosca,’” she said with a laugh. “But after my little accident, I’m convinced you can do it without jumping.” And in Paris she will not jump.


A Bulgarian soprano, Ms. Yoncheva is, at the age of 37, the youngest of this production’s sopranos as well as the one least practiced in the role. Her first “Tosca” was at the Metropolitan Opera in New York 18 months ago, her second is this week in Berlin and her third next month in Paris. Having begun as a lyric soprano, she explained from Berlin, she needed time to develop her middle register. “Now, Tosca is actually a very comfortable part for my voice,” she said.

She also has strong views on how Floria Tosca should be interpreted. “After Callas and her contemporaries, we always thought Tosca was this arrogant diva everyone had to bow to, but I see her as very young,” she said. “Yes, she is a diva, but she’s ready to die, to kill, to love, to destroy everything or risk everything to save her partner. This is something very young. When you are young, you just go for it.”

“So I’m playing this passion in a different way,” she went on. “A woman has instincts. Women are very interesting animals, we have the psychology to understand what’s happening. Tosca immediately understands what Scarpia really wants. She is a very instinctive woman.”

As with Ms. Harteros and Ms. Serafin, “Vissi d’arte” came into the conversation. “If you sing it in a concert, it’s actually very short and beautiful and caressing to the voice,” Ms. Yoncheva said. “But in the opera, it comes after a lot of screaming, so the challenge is to switch from the dramatic to a kind of angelic lyrical voice.”

As for the infamous leap from the castle, even had the Paris production included it, Ms. Yoncheva would have declined because she is six months pregnant with a girl.

“I’m not sure I want her to be a singer,” she said, “but I think she already knows ‘Tosca’ by heart.”